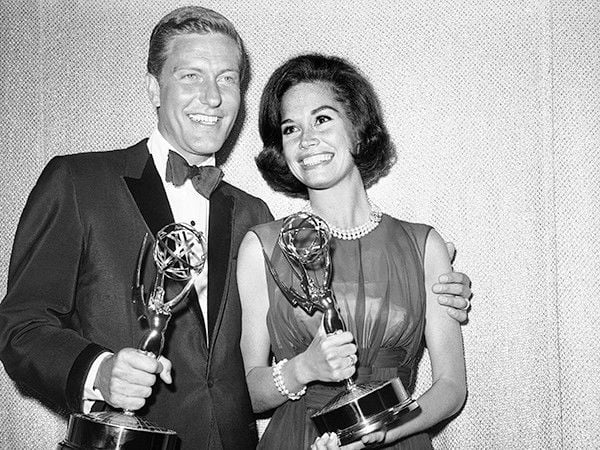 Dick Van Dyke, left, and Mary Tyler Moore, co-stars of "The Dick Van Dyke Show" backstage at the Palladium with their Emmys for best actor and actress in a series at the Television Academy's 16th annual awards show in 1964. (AP Photo, File) 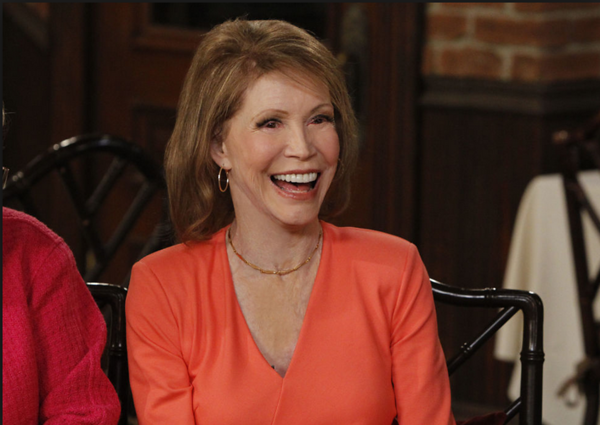 Dick Van Dyke, left, and Mary Tyler Moore, co-stars of "The Dick Van Dyke Show" backstage at the Palladium with their Emmys for best actor and actress in a series at the Television Academy's 16th annual awards show in 1964. (AP Photo, File)

She turned the world on with her smile.

With a carefree toss of a black beret — into the downtown Minneapolis winter wind — Mary Tyler Moore captured the hearts of millions of TV viewers.

That opening scene from her hit 1970s sitcom, The Mary Tyler Moore Show, cemented an image in our minds that would never fade away. Moore was the girl next door, the colleague at the next desk, the neighbor in the apartment just below. When her ensemble sitcom ended, it was with a big group hug.

That's what we'd all like to give Moore one last time.

One of the most beloved television actresses of the 20th century, Moore died Wednesday. according to her longtime publicist, Mara Buxbaum. She was 80, and had fought a long battle with diabetes.

She played two cute and perky characters that forever marked her career: housewife Laura Petrie on The Dick Van Dyke Show, and single girl Mary Richards. And   even though she would try to break that image with other roles through the years, those roles forever touched TV audiences.

Moore was a leggy brunette dancer from Brooklyn.  Her first TV job came soon after high school in 1955, when she played Happy Hotpoint, a dancing elf in an appliance commercial.

That same year, the aspiring actress, whose family had moved to Los Angeles, married 27-year-old Dick Meeker, a cranberry-products salesman. For Moore, the nuptials were a ticket out of an unhappy household with a devoutly Catholic father, an alcoholic mother and a neighbor who sexually abused her when she was young. Meeker and Moore's son Richie was born in 1956.

In 1961, Moore's career began to take off as she landed the role of Laura Petrie, the suburban New York wife of Van Dyke's Rob, a TV writer, You can still hear Moore's flustered, singsong voice saying, "Oh, Rob!"

She was only 23 when she landed the role, but she was the perfect foil for Van Dyke, and proved herself to be his comedic equal. The chemistry between them was perfect; America loved their believable and humorous portrayal of a married couple.

And the show was a departure for sitcoms: Moore's trademark Capri pants and flats caused a stir in an era when other television housewives were still wearing dresses and heels.

But it was the situational comedy, the brainchild of series creator Carl Reiner, that made for such laughs, along with a cast that also included Morey Amsterdam (Buddy) and Rosie Marie as Sally, Rob's colleagues.

In a1965 episode, Mary got her big toe stuck in the faucet of a hotel bath tub, foiling their plans to see a play. "I was playing with a drip!" Laura said. Silly stuff, but lovable, simple stuff — that was Van Dyke.

The show ended in 1966, and a year later, Moore played Julie Andrews' pal in the 1920s musical Thoroughly Modern Millie. But it would be back on TV that Moore would find more fame.

The Mary Tyler Moore Show premiered on CBS in September 1970, and enjoyed a seven-year run, earning Moore five Emmy awards. It was considered groundbreaking in that Mary Richards was a single woman who was not divorced or widowed, but "determined to make it on her own."

The final episode made history as it brought closure to the characters when they were all fired (except for Ted). The final scene: a big group hug, and Mary turning out the lights for the last time.

"It has surprised me year after year from the last episode of The Mary Tyler Moore Show that it was revered and continues to be, but I think I've become used to it," Moore told The Toronto Star in 1997. "I treasure the esteem with which the public holds Mary Richards — and Mary Tyler Moore, who helped create her. It's a great feeling."

Moore never really found another hit show like that one, though Moore spawned several spinoffs, including Lou Grant, Rhoda and Phyllis.

Then next success came in a very different role,  in the 1980 movie Ordinary People. Director Robert Redford had said he wanted to show the world the "dark side of Mary Tyler Moore," and he did. She earned rave reviews for her performance as a cold mother coping with an unhappy family and earned a best-actress Oscar nomination.

What followed in the years after were TV movies, including Heartsounds (1984), Finnegan Begin Again (1985), Gore Vidal's Lincoln, 1988 and Stolen Babies, a 1993 project for which she won another Emmy.

Two attempts to recapture her sitcom glory on CBS (Mary in 1985 and Annie McGuire in 1988) were unsuccessful. Viewers seemed unwilling to accept her in a comedy as anything other than a facet of Laura Petrie and Mary Richards.

While onscreen she had found a way to play the happy housewife and mother, in real life her story was more soap opera than sitcom.

After her early marriage to Meeker ended in 1961, she married NBC programmer Grant Tinker, and the two founded the successful MTM Enterprises in 1969. With that company, Tinker produced many memorable TV series through the years, including Hill Street Blues, St. Elsewhere, The Bob Newhart Show and WKRP in Cincinnati.

They seemed quite the Hollywood TV couple and stayed together until splitting in 1981. (The company was sold in 1990). But later Moore would say that Tinker was more a father figure than a husband.

In 1983, Moore changed that behavior pattern and married Robert Levine, a cardiologist 18 years her junior.

Battling what she called "a social drinking habit," Moore entered the Betty Ford clinic in 1984. She was also diagnosed as having diabetes early in her life, and she was a longtime vegetarian and animal rights activist.

She had to cope with much tragedy in her personal life: the death of only son Richie at 24, in 1980 of a self-inflicted gunshot, and the death of her 21-year-old sister in 1978 from an overdose of drugs and alcohol.

In addition, Moore, in her 1995 autobiography, After All, revealed that she and her husband Robert Levine helped her terminally ill brother John with an assisted suicide attempt. John had a stash of painkillers which Moore mashed into ice cream and spoon-fed to her brother while her husband operated a morphine pump. Her brother survived for three months before succumbing to natural causes.

In her autobiography, Moore also wrote about having cosmetic surgery. "I like to think of (the surgery) as staying fit. And if it can keep my face up where it belongs, then I will go to a doctor and get his assistance," she told Entertainment Weekly in 1995.

Through the years she used her fame to help the Juvenile Diabetes Foundation, and, as a devoted animal lover, she served on the boards of several animal welfare organizations, including the American Society for the Prevention of Cruelty to Animals.

Her success on TV helped give her a platform for those causes.

"I think few of us ever reach a point of knowing why we were here. And I have reached that point at a very early age," she told The Toronto Star in 1997. "I have no children now, but I know I touched lives in a very strong way, both comedically and esthetically."

TV historian Tim Brooks once said, "Mary Tyler Moore must be counted, along with Lucille Ball and Carol Burnett, as one of the great comediennes of American television."

Although Moore sometimes seemed to wish she could separate herself from those two famous characters, she once said when she found herself unable to sleep, she would sometimes watch old episodes of The Dick Van Dyke Show or The Mary Tyler Moore Show.

"Without any trouble at all, I'll lose myself in the episodes," she said when she was in her ‘60s. "It's been so long I can hardly remember what the plots were, so it's almost fresh to me. They're always so wise. They have a lesson, small ones and happy ones. They give you hope that there's a better future."