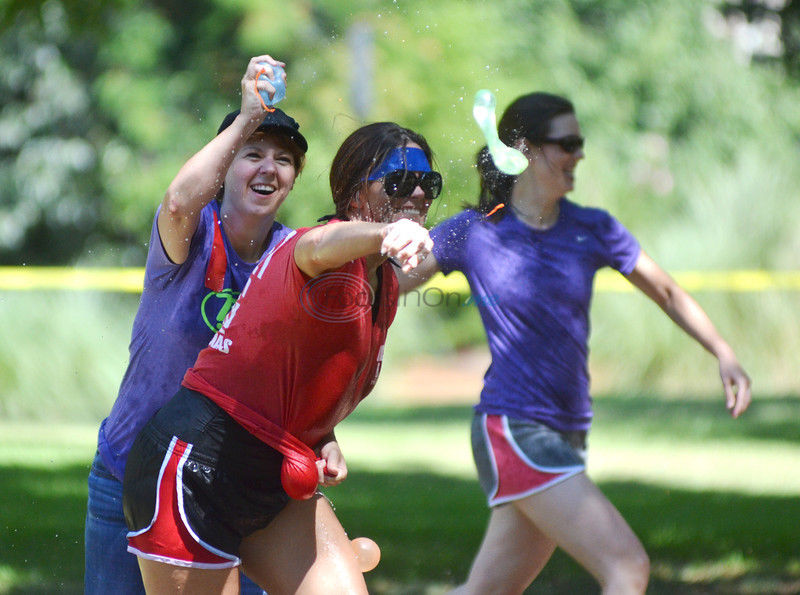 The war commences with the launch of water balloons across Bergfeld Park, in celebration of the Aquapalooza Water Balloon Fight. Funds raised at the event will be donated to local nonprofit organization People Attempting to Help. (Victor Texcucano) 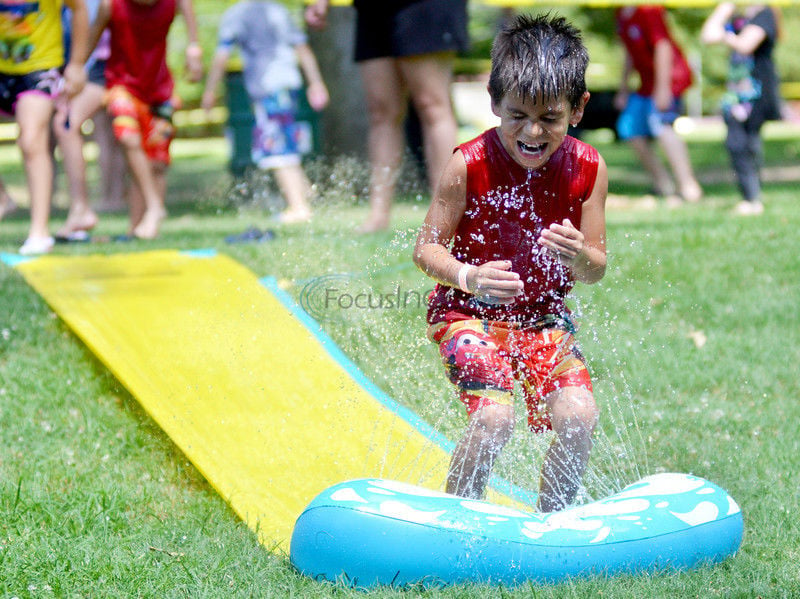 The war commences with the launch of water balloons across Bergfeld Park, in celebration of the Aquapalooza Water Balloon Fight. Funds raised at the event will be donated to local nonprofit organization People Attempting to Help. (Victor Texcucano)

Warriors marked with a red or blue stripe of duct tape defended their territory by hurling multicolor water bombs at the opposing team.

The game of water capture the flag was the cornerstone of the first Aquapalooza event in the park. The day held a water balloon battle, dunking booth and water gun fights, with all the proceeds benefiting People Attempting to Help (PATH).

Kyna Adams, president of the PATH board of directors, said there were between 13,000 and 14,000 water bombs at the start of the afternoon. They lasted about two hours as roughly 75 participants pursued a war.

A thin line of cones separated the two territories, with a prized pinwheel at each end. Once the enemy encroached into their home front, they were attacked. If the bomb exploded on them, they were out of the round. The pinwheel (or flag for the game's purposes) was dropped after a bomb exploded on its holder for the next team member to find and try to take across the drawn battle line.

For a brief time, 32-year-old Elizabeth Carrasco's family was divided. She was a member of the blue team, and her 6-year-old twin boys were on the red team.

"It's crazy because you see balloons coming from left and right, and you have to dodge this one and dodge that one," she said.

Mrs. Carrasco said she was charged with defending the pinwheel. She said they had a pile of balloons ready to counter-attack, but sometimes the balloons would hit and not explode, which did not count as an out.

Her son Juan Ordorica snuck by her and won two rounds for his team.

On the battlefield, there was no mercy for women or children. Red team player Laura Durham, 26, of Tyler, joked that the children were the most ruthless in the game. She said it was a game of dodging angry balloon throwers.

"They come at you with a fury, even the little kids …" she said. "They come up to you with the cute faces and then sneak up with a balloon."

After several rounds, the blue team was declared the overall winner, and the players hashed out the rest of the game with a free-for-all with the remaining arsenal of water bombs.

The game started out as an adult water fight among friends, but after many people expressed interest, it was opened to the public to benefit PATH, Ms. Adams said. It was organized in a week.

Each participant paid a small fee to play the capture the flag and the dunking booth. Concessions also were available.

Ms. Adams said the event was not intended to raise a large sum of money, but every little bit helps for a program she feels is an asset to the community.

"I think it's the best organization in the world ..." she said. "PATH does so much for so many people. We don't just have one food pantry; we have prescription medications; we have emergency assistance. We do so many different things."

He said in a loud voice, “Fear God and give him glory, because the hour of his judgment has come. Worship him who made the heavens, the earth, the sea and the springs of water.” (Revelation 14:7)