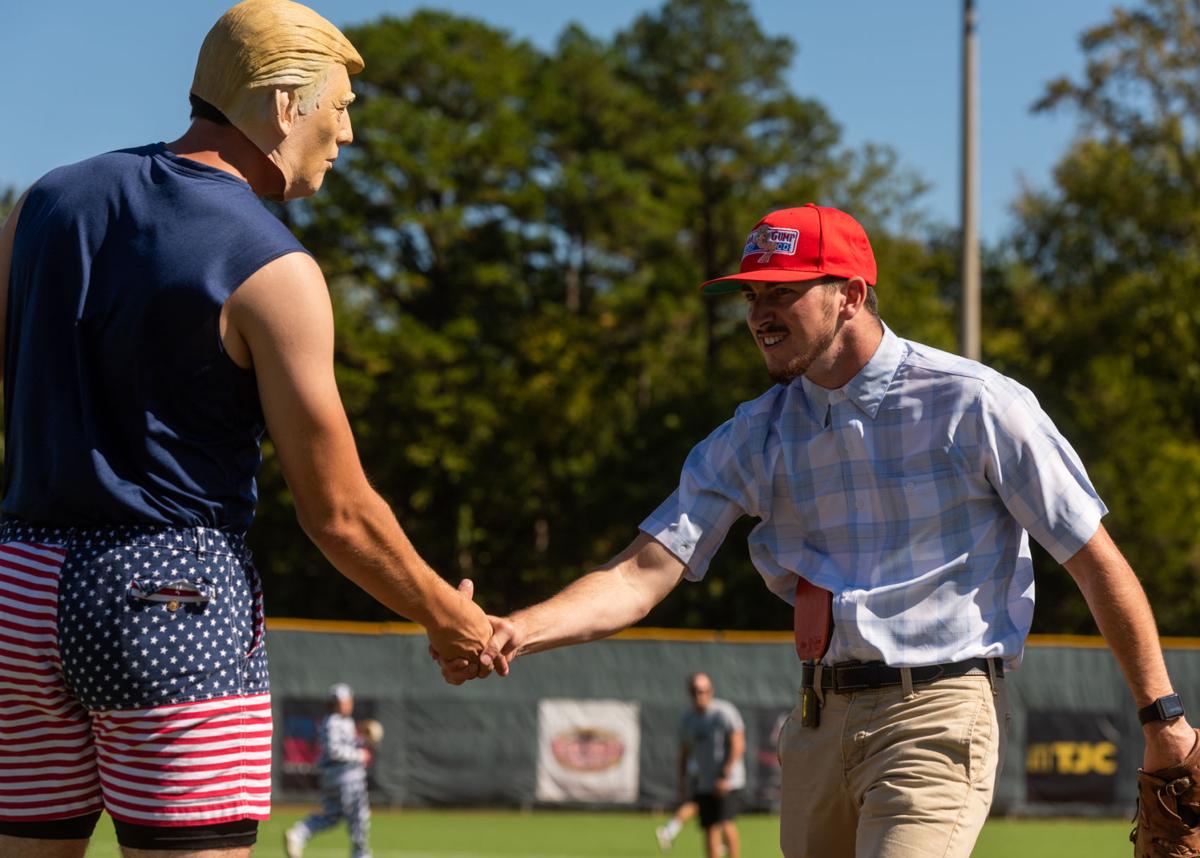 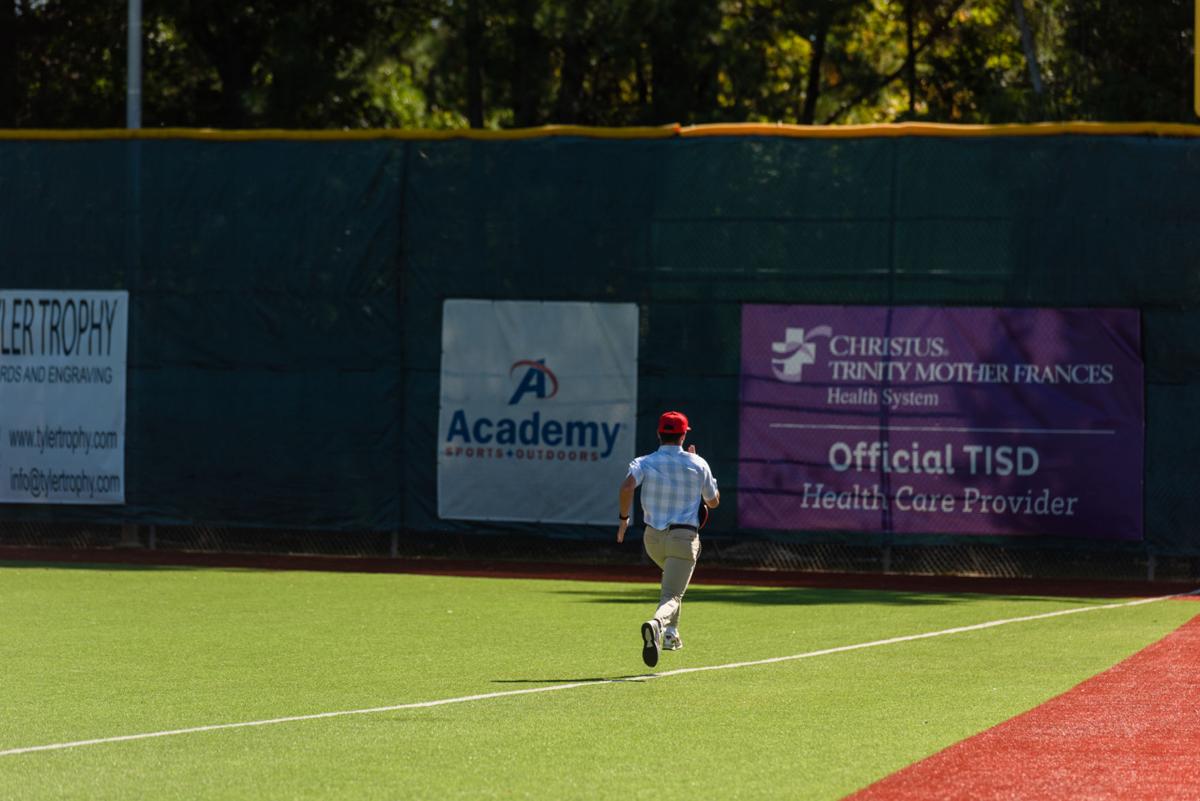 Dr. Tim Drain looks forward to the Tyler Junior College baseball team’s annual Halloween Baseball Bash each year, as student-athletes dress up in costumes and play, no matter how restricted their movement is.

As he watched from the stands on a sun-soaked Wednesday afternoon, Ren Reynolds, a sophomore infielder from Kilgore, was stealing the show. He was dressed as the character Forrest Gump, played by Tom Hanks in the 1994 hit movie.

Drain wanted to video Reynolds running, so during his last at bat, he pulled out his cell phone and took a 23-second video.

In less than 23 hours, the 23-second video of Reynolds running to first base, not stopping and jumping over the right field fence, had close to five million views on Twitter and over one million views on Facebook. The college Apache Athletics page has seen an astronomical increase of 18,628% in post reactions and likes are up 645%. Did people “like” the video? They either liked or shared it 1.4 million times!

“One of my teammates (Trey Erwin) told me to keep running, and when I did and jumped the fence I thought ‘I hope they think it’s funny’ because I was tired after!” said Reynolds. “I picked Forrest Gump because that was one of the movies I watched with my family growing up and we thought it was super funny.”

Drain also thought it was funny. In fact, many people commented his laugh and reaction while trying to video was the perfect complement.

“That’s my laugh, there is no doubt! I didn’t realize I was laughing that long until I watched it ... and I still laugh every time,” said Drain, who spent 19 years as the athletic director and is now the associate vice provost for student affairs. “That game goes an hour and a half to two hours and that is the only video I shot all day.

“From minute one, Ren was in character, from showing up at the field and all the little things he did during the game. There was a routine fly ball to right field and he sounded just like Tom Hanks,” Drain continued. “Instead of saying ‘I got it,’ he yelled ‘I gawd iiit! I gawd iiit!’ Then he got a single and stood on first and waved like Forrest, and when they singled, he never stopped running and tried to score.”

Drain said he had to get video.

“So I thought, ‘I just want a video of him running.’ I had no idea what would happen,” said Drain. “It’s like when a comedian tells a long joke and you don’t see it going that way and it’s funnier than you thought it would be. I didn’t see him going all the way and jumping the fence but when he did it was funnier.”

Being a fan of the movie, Drain said the crowd wondered if Reynolds was going to come back wearing different clothes and a beard like Forrest Gump did when he ran across the country for no reason.

After the laughs, the social media storm hit.

“Then I woke up and it was close to three million, I was surprised! I thought it was funny, but everyone thought it was funnier than I did. I didn’t think it would get the attention it did,” Reynolds continued. “I’m glad I was able to help in any way to get the college free publicity and hopefully some good comes out of it. We had some pretty good costumes all-in-all; I’ll keep an eye on it next year.”

Reynolds, a business major, is not just a good actor, he’s a very good player. Last season as a freshman at Frontier Community College in Illinois, he hit .331 for the Bobcats with 20 doubles, three home runs, three triples, 36 RBIs and had 56 hits in 50 games. He also stole 18 bases.

He has not made a decision where he is going to continue his college career, but there is good news for University of Alabama football fans who have not had a star since Forrest Gump walked on in the movie.

“I’m still waiting to hear from Alabama baseball,” said Reynolds with a laugh, adding, “If nothing else, I could go there and return kicks if they want me to.”

Drain and the athletic department could make that happen, as they fielded national media requests all day and TJC head baseball coach Doug Wren has heard from several four-year colleges.

The college is fortunate to have Drain as part of the team who updates the social media pages, as he posted to the college and athletics sites. And Assistant Athletic Director Kelsi Weeks, has responded on social media to all of the comments and requests with quotes from the movie.

“Kelsi Weeks has seen that movie 9.2 billion times,” Drain joked. “A lot of her responses included lines like, ‘That’s all I got to say about that.’ They have been fun to watch.”

When NBC Sports asked permission to use the video, Weeks responded with another Gump quote, “Absolutely. We go together like peas and carrots.”

Drain emailed the administration before bed Wednesday night to let them know the video was doing well. He said he was shocked to see over four million views.

“We’ve been contacted by everyone ... It was a fun, fun day,” said Drain. “Things like this, positive news, over 4.5 million views, it’s so great.”

“It’s given us positive exposure. In this day and age of negative things on social media, it was great to have this kind of light on the college, a great, light-hearted family fun event,” he said.

Wren said he did not expect the video to go viral.

“No, not at all. In fact, this whole day has been pretty crazy, I’ve been getting so many emails, text messages and instant messages from friends, to cousins, friends, former players, four-year coaches and scouts,” said Wren. “Ren did a really great job embodying Tom Hanks’ character and was spot-on with his actions and reactions. It became an overnight sensation which is kinda crazy.”

Wren said the office was busy with phone calls and emails from CBS, Barstool Sports, NBC and others.

“There’s no other way to say it, it’s gone viral,” he said. “They posted the running to first and the baseball twitter account posted Ren waving to the fans like Forrest Gump. To me, the wave was perfect, spot-on, it looks like he was looking the stands. But it was just a mom in the stands shooting video of her son and she happened to catch Ren waving like Forrest Gump.”

Wren said another great moment was on a base hit, Reynolds was supposed to run to second and stop, but like Forrest Gump he just kept running and running around the bases. The throw bounced near him and he kicked the ball as he ran and kept running, scoring all the way from first.

“There were so many great moments,” said Wren. “The triceratops costume was overshadowed in this. He couldn’t see and they had to yell wen to swing, plus the costume was the size of several people.”

Another great at bat! This one features a triceratops who can’t see the pitch coming and is counting on his teammates help in timing his swing!!!!! pic.twitter.com/GSToHBz4Ql

Will the TJC baseball team top this performance in the annual game next year?

“I already told several people our Halloween game next year is a bust,” said Wren laughing. “No way way it live up to this!”