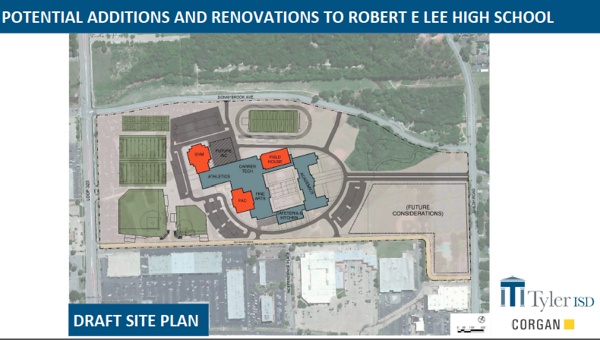 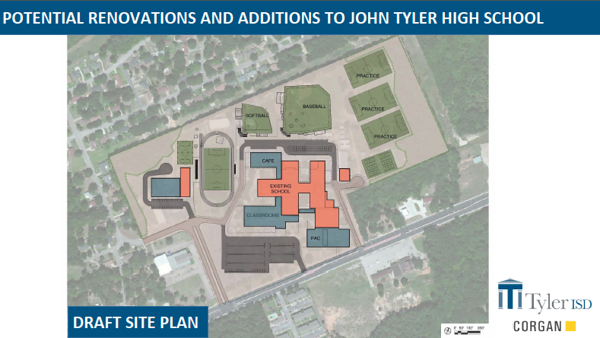 On the first day of winter break, the Tyler ISD school board was hard at work planning the district's future by selecting the architectural firms that will steer the process of replacing John Tyler and Robert E. Lee high schools should the community support a bond package this spring.

"There's certainly not a playbook on exactly how to go about this," Superintendent Marty Crawford told the board. "Sometimes you select the firm after (a bond is called), but considering the uniqueness of what is at play here, I do think it's important to have experts at our disposal to show us and the community what this might look like."

The district sent out a request for qualifications to several firms, which was then narrowed down by the Architect Selection Committee made up of two community members, two board members and the head of facilities.

The committee selected four architectural firms to work in teams of two on each high school. The board voted Monday to begin the process of entering contracts with the firms, but the details into those terms were not specified, as officials said they had not yet begun the contract negotiations.

Corgan Associates, the district's architectural firm on retainer that provided mockups for various options at recent board meetings, will be joined by Harris Craig Architects to tackle replacement or renovation of Robert E. Lee.

"Corgan has a lot of experience with new educational (construction) and (new) wings, but Harris Craig is here locally and they've been involved with all three bonds," Tyler ISD School Board President Andy Bergfeld said. "It seemed like the right fit."

Stantec and Fitzpatrick Associates will work on plans for John Tyler High School.

"The JT project has more moving parts and having Fitzpatrick here locally, a lot of projects around locally where they've had to work and be on the job a little is, to me, what kind of led to them being on that project," Bergfeld said.

Bergfeld said the board hopes to have preliminary information about the possible scope of the projects by the end of January, so it's able to make presentations to the community.

"We're not doing full architectural plans starting tomorrow; the public needs to be clear on that," Bergfeld said. "We're getting information should we call a bond that gives full information at their disposal."

Plans presented by Corgan for John Tyler showed the school could be renovated to a like new condition for $87 million, some $43 million less than the proposal for an entirely new build would cost.

Renovations at Lee would run $122 million, with a new build coming in at $130 million.

Corgan would remain on retainer unless the board decides otherwise, Crawford said.

Director of Facilities Tim Loper said the criteria used in selection was rigorous and the firms selected provided the best options for the district.

The criteria included such requirements as the number of quality innovative high schools they have built or remodeled, history of work with Tyler ISD and community partnerships, their resources available in the Tyler area, experience with Tyler ISD, past or present litigation and how well they adhered to the instructions provided.

Should a bond pass, the contract with the firms will extend to the building phase.

During the meeting, the board nominated Andy Newberry to its vacant seat on the Smith County Appraisal District board of directors.

Newberry will fill the seat until Dec. 31, 2017. He is replacing John Denoyelles, who resigned on Nov. 8.

"I know Andy; I've known him a long time," Bergfeld said. "He's got a lot of real estate knowledge and is easy to work with."

Crawford said Newberry was selected in part because he is a parent of Tyler ISD students, a Robert E. Lee graduate and a local Realtor.