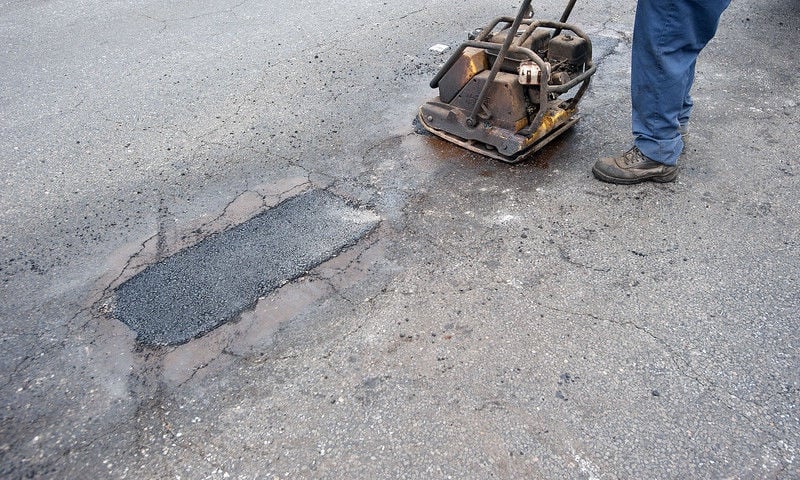 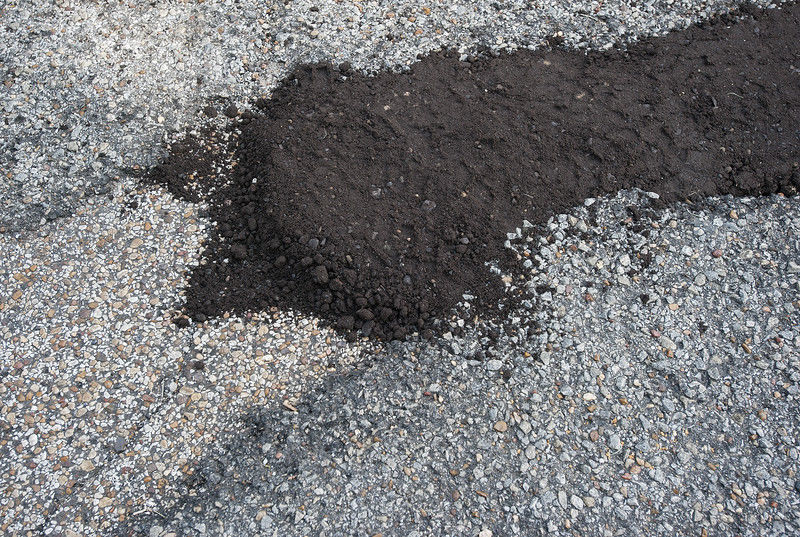 photo by Sarah A. Miller/Tyler Morning Telegraph A pot hole on Top Hill Drive in Tyler is filled Tuesday Sept. 30. 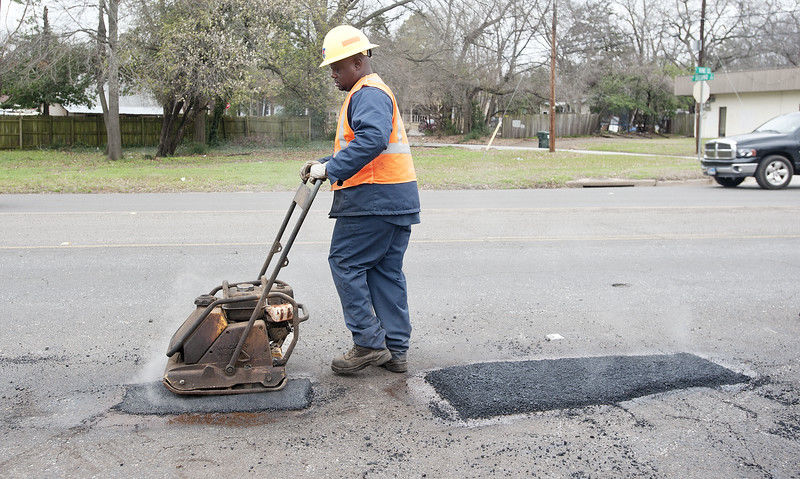 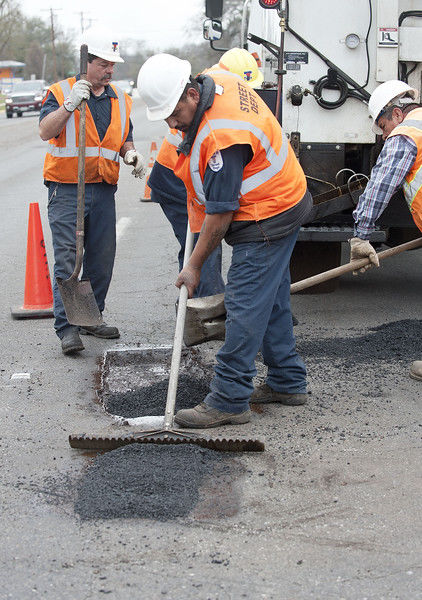 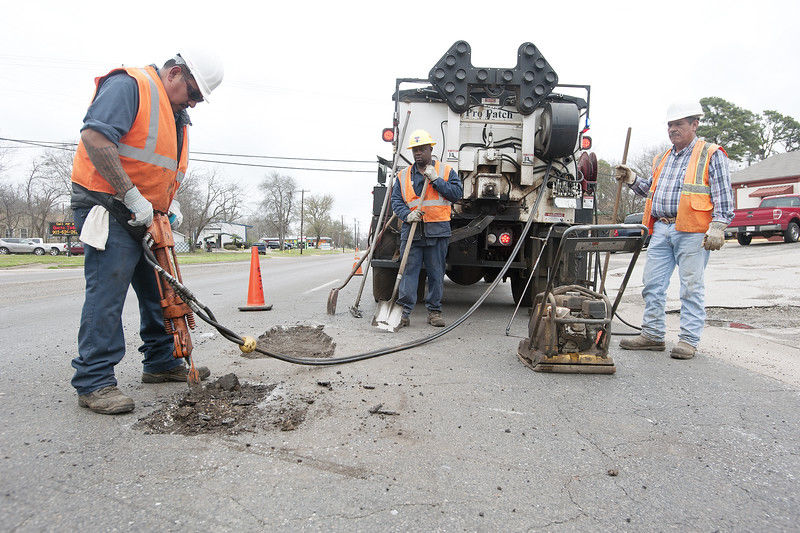 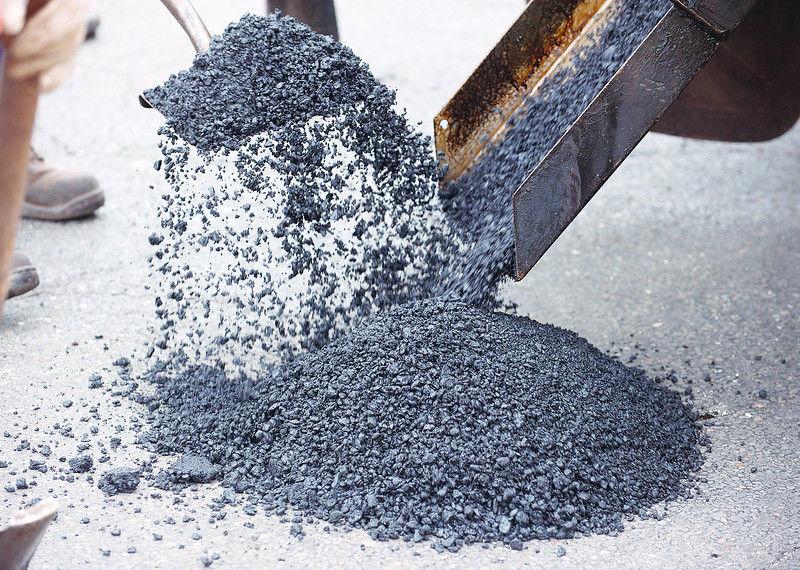 photo by Sarah A. Miller/Tyler Morning Telegraph A pot hole on Top Hill Drive in Tyler is filled Tuesday Sept. 30.

Tyler's city roads are already in pretty good shape, and the Tyler City Council is working to make sure they stay that way.

But that will come with a cost.

On Wednesday, the Tyler City Council discussed the current street conditions and how to improve them. The hour and a half discussion was the first of many to come on a 10-year road plan.

In 2012, the city hired a firm to drive all of its streets and assess the condition of each. Every street was given a rating, called a pavement condition index or PCI, from 0 to 100. A newly paved street is rated at a 100 on the scale.

At the time, the city was given an overall rating of 81, which is high for a city Tyler's size.

But, after four years and nearly $10 million spent on the roads, that rating has dropped to a 78.

City staff is proposing hiring a separate company, Dynatest, next budget year to drive the streets again to get a second data set and a way to judge the rate of deterioration of the city's 1,300 lane miles of streets. The consultant, if approved, would be paid for through the half-cent sales tax fund.

"The data at that time showed we had an 81," City Engineer Carter Delleney. "We haven't collected (data) since, so this is all based on a theoretical curve. All we have is one point on a line. As we collect more data, we will have a better curve."

Using that theoretical curve, the city and Dynatest created a 10-year plan and funding models to bring the city's streets back to a PCI of 81.

Based on those cost estimates, the City Council may decide to lower its threshold and aim for a PCI of 80 to 75.

This fiscal year the city budgeted $3.1 million for road improvements, including its seal coat program and for asphalt overlays, according to information from the city of Tyler.

Each year, Tyler has moderately increased the amount of money it spends on its roads. Since the current improvement plan was implemented in 2013, the city has increased spending on its roads by $754,421.

The city's engineers determined it would require a significant increase in spending to maintain a PCI of 81 over the next 10 years.

The department estimates spending more on the roads actually will save $3.2 million taxpayer dollars over the next 10 years.

Delleney said the more the city spends on preventative maintenance, particularly seal coats, the more life the streets will get in the long run.

Seal coats involve spreading binder and a ground up rock over the top of the streets. The mixture seals cracks and rehydrates the asphalt. The texture also improves the road's drivability. It costs about 41 cents per square foot compared to $1.50 for an asphalt overlay and $7 per square foot to reconstruct a road from scratch.

Council members were in favor of increasing the amount of money spent on crack seals, which involves sealing individual cracks on already-excellent roadways to prevent them from widening. Crack seal is best on roads with a PCI above 85 and costs a penny per square foot.

"The most bang for your buck is a seal coat," Delleney said. "If you have a street that needs crack sealing - a seal coat can cover many sins, I would say. Our focus today is honing in on seal coat and overlay."

Mayor Martin Heines asked for more information from staff on exactly how many lane lines of road could be repaired for the requested funds.

The city also will have to discuss how to pay for the program.

Looking forward, the council will have to take a hard look at how to fund a road program, especially if the declining trend continues into next fiscal year, which begins on Oct. 1.

That means the proposed 108 percent increase in seal coat funding would have to come from the city's general budget.

"(The Council) spent considerable time trying to determine what level they want to have our streets at and what average score that they feel is best for the community compared to the amount of dollars they want to spend on it," City Manager Edward Broussard said. "That will become a big part of the budget discussions. If we want a score of 80, how do we create the funding to achieve that?"