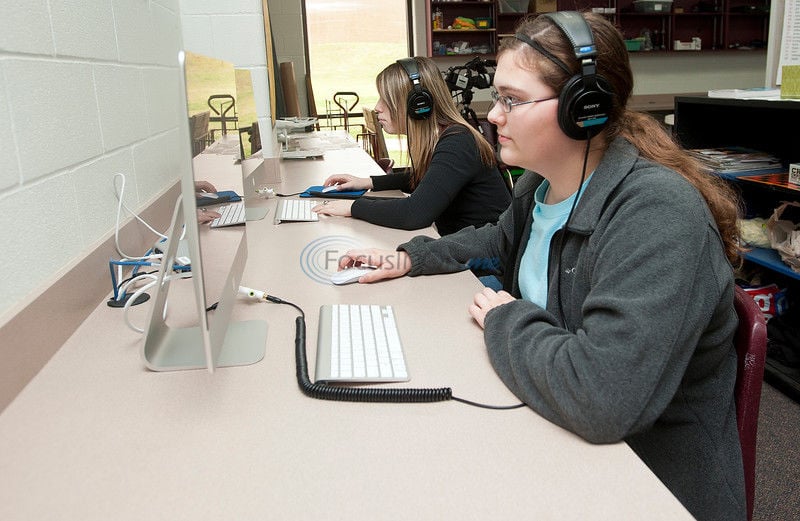 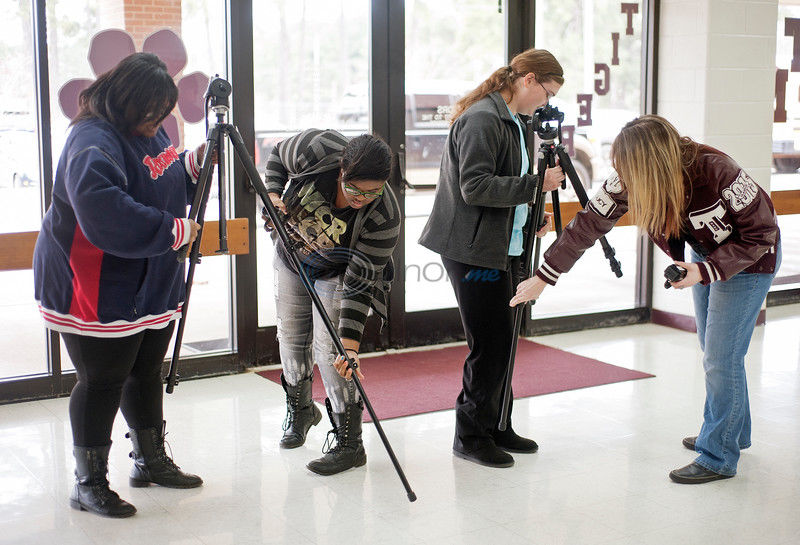 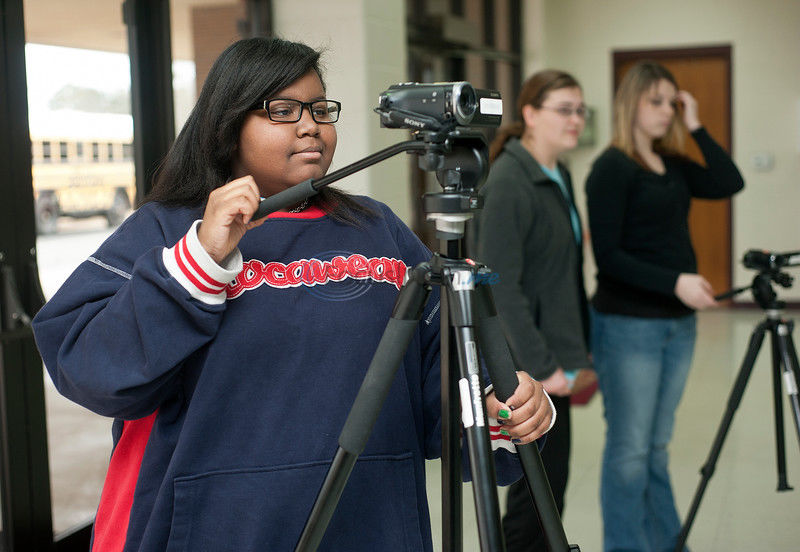 photo by Sarah A. Miller/Tyler Morning Telegraph Eleventh-grader Tiffany Square, 17, mans a camcorder during a project for her video production class Feb. 27, 2015 at Troup Middle School. The new video classes are open to both middle school and high school students. 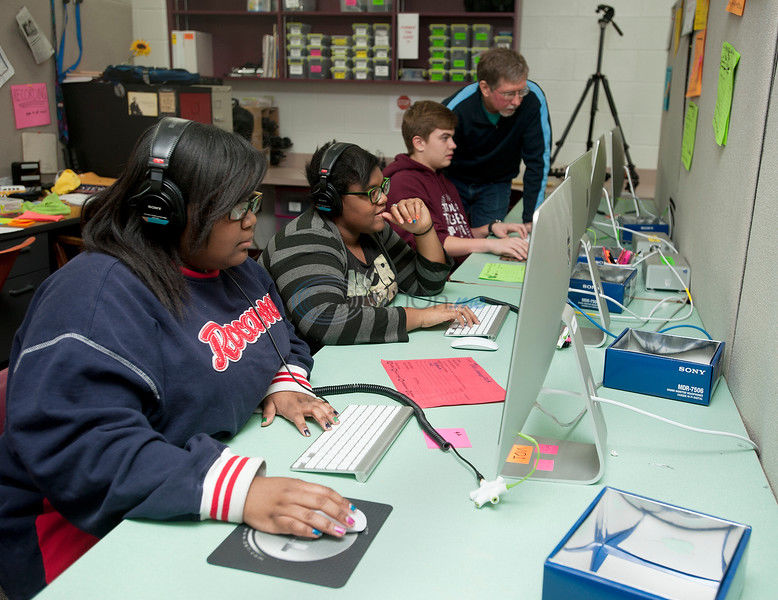 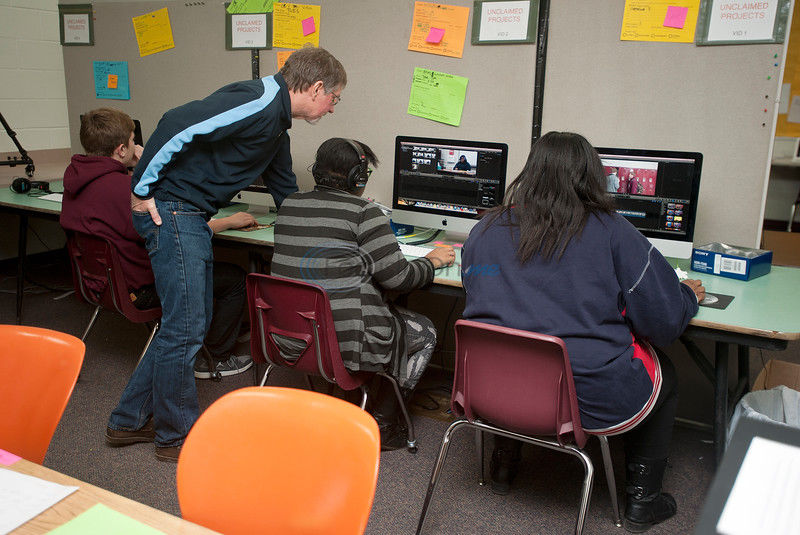 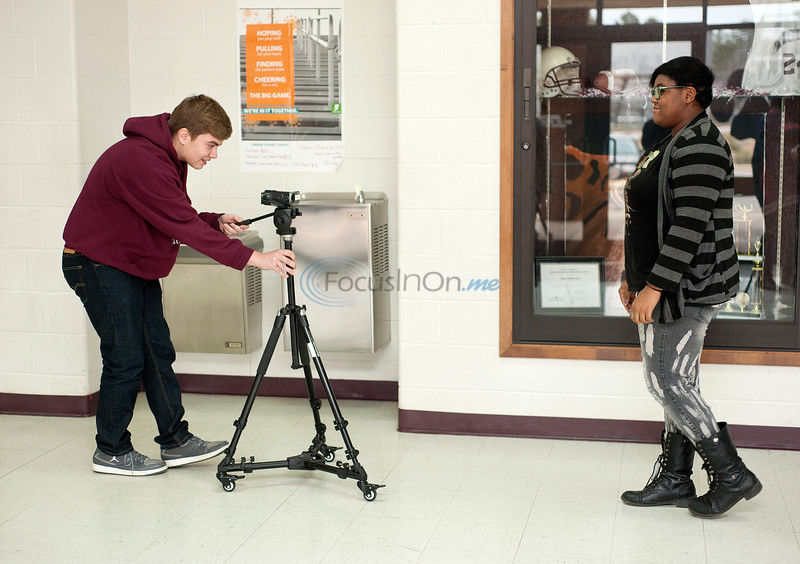 photo by Sarah A. Miller/Tyler Morning Telegraph Eleventh-grader Tiffany Square, 17, mans a camcorder during a project for her video production class Feb. 27, 2015 at Troup Middle School. The new video classes are open to both middle school and high school students.

TROUP — Shay Tilley, 17, said she thought it would be cool to figure out how to piece together and make videos on her own, so she enrolled in Troup ISD's new video production class for middle school and high school students.

Shay, a junior, said she wants "to get an understanding of how to do everything."

Describing herself as "a technical game nerd," Shay said she plays video games outside of class, listens to the music and thinks about how the music fits the game and "helps you better enjoy the game."

Shay likes directing the filming in the video production class, but wants to go to college after high school and become a sound engineer for a gaming company.

Ethan Houghton, 15, a sophomore, only signed up for the new video production class because he wasn't happy with his class schedule at the start of the school year. He looked for options and decided to try the video class.

"I like the freedom. I like being able to come in here and experiment with all the technology we have and be creative," Ethan said. "I've learned how much goes into making videos and how difficult things some people take for granted as being entertaining are hard to produce and create."

From the beginning of school until now, Ethan said, "I've really gained a lot of interest" in the video production class. It's a nice change from daily school; it's different from math and English class."

Allie Cummins, 18, a senior, is not sure what career she may seek, but said if she decides to into filmmaking, the video production class will get her ready and she will not be going into something completely new.

She said she likes to film and to edit and to have her camera set up for what she thinks will be a good view. Currently, Allie is working on a project involving writing the script and filming a murder mystery.

Haley Melton, 17, a junior, said, "I took this class so that I could learn about video making and editing. I like learning how to make my own videos. I've learned the different shots on how to film things and how to use editing on computers."

For Tiffany Quare, 17, a junior, taking the video production class grew out of her long-time interest in editing videos. She said she watches a lot of U2 videos.

"I'm really into how they piece together some of their videos. When I found out they were having this class for the first year, I was thinking I had to take it," she said.

Tiffany, who said she is thinking about a career in video editing, said, "I have kind of thought about going to college for editing film and this will probably help me now that I know how to use some of the programs and some of the terms."

There are two eighth-grade classes and three high school classes in video production. Total enrollment in the five classes is approximately 50 students.

Troup ISD Superintendent Stuart Bird said he had the program in other places where he has been and thought it would be good to start this year in Troup for a variety of reasons.

The course, he said, "provides a great education for our kids who might want to go in that field" and who wouldn't otherwise have the opportunity to work with video productions. Bird added videos they produce provide information for the school district and the community and showcase the schools.

The video production classes have produced about 100 videos that can be seen on Vimeo.

Statistics show people in 47 countries — Sweden, Germany and elsewhere — have watched the videos.

As of last week, viewers had pushed the play button 3,732 times to watch class videos.

"There are plenty of schools around, universities and colleges, that have whole programs in video production. You can make a career out of doing any one of the many components," he said, such as editing and color correction.

Further, McGehee said, the class teaches students to work in small groups and collaborate, to come up with ideas, to solve problems, to interact with other people — skills he said will be useful to them in whatever career they end up in.

The class has considerable equipment for students to use in learning video production. The equipment includes six new cameras, two of which cost $1,500 each, and six computers with video editing software, each costing $2,500.

The class is different from an algebra, English and history class, McGehee said. "I try to give students a lot of creative freedom and there are basic rules that are obvious to anybody … (don't do) anything inappropriate."

McGehee briefed the students on all the terminology in the video field, how to use editing software and cameras and technical things about cameras.

He emphasizes the importance of using a tripod.

Early on, he talks about coming up with a story line and what the main story will be that students are trying to get across when they create a video rather than just going out and winging it with a camera in hand.

"We talk about what tight editing means and a lot about transitioning between shots and plays … ways of piecing together the clips and the video," he said.

McGehee poses problems to students about how to make an interesting video out of a classroom experiment, what camera angle to pick and how long to stay there and how to interact with people they are filming.

"All of these little details crop up," he said.

Right now, students are working in groups making short films, creating a plot and turning it into a screenplay. "They have to learn how to get their ideas across, listen to other people's ideas and come up with one idea about a plot or a camera angle," McGehee said.

"There's a lot of problem solving about everything and I'm finding they are learning to think in a non linear fashion which is new to them," he said, explaining students are learning to film out of sequence for more efficiency.

McGehee talks about rules that govern the angle and placement of cameras for filming a football or a basketball game.

The students film highlights of all the Troup ISD sporting events, for example creating a four-minute highlight reel of high school football games that is shown on monitors in the high school hallways.

The video production classes also tape classroom events, such as an interesting science experiment, band concerts and an elementary play.

A camera from the video class is set up in the city council chambers, where a city official turns it on and films council meetings.

"We just thought it was a good idea," City Manager Gene Cottle said. "They had the technology to do it and the ability to post the videos where we can get them on our web site so the public could have access to them."