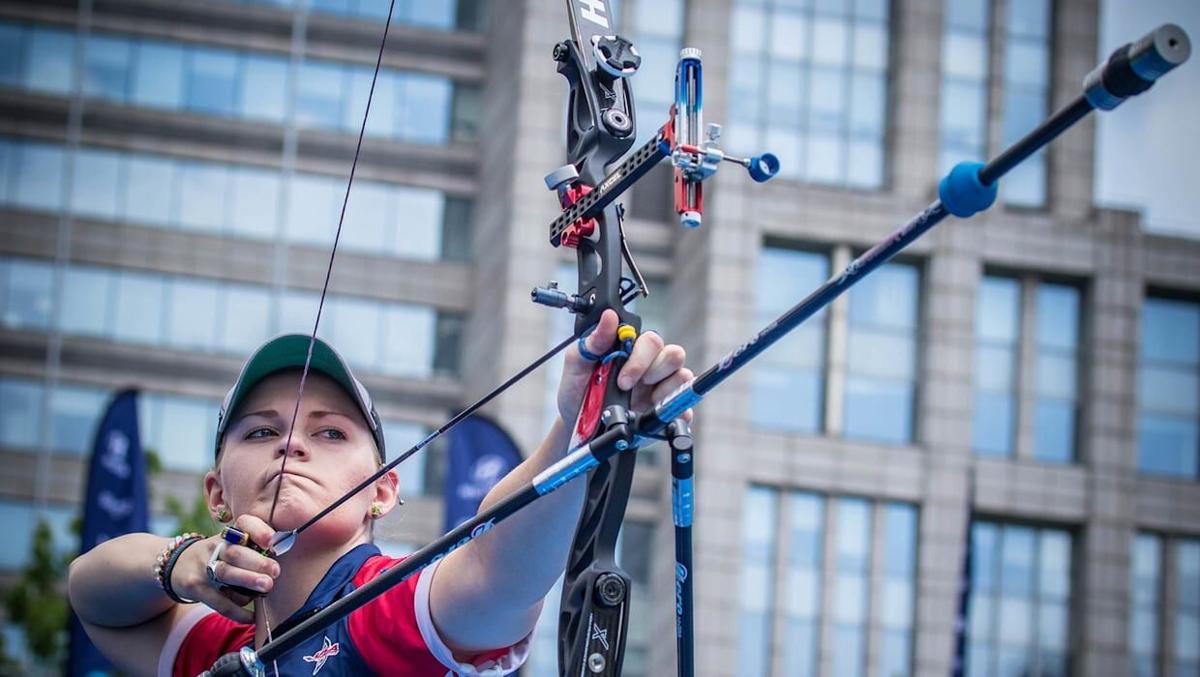 Flint’s Mackenzie Brown is competing in her second Olympic Games in Tokyo. 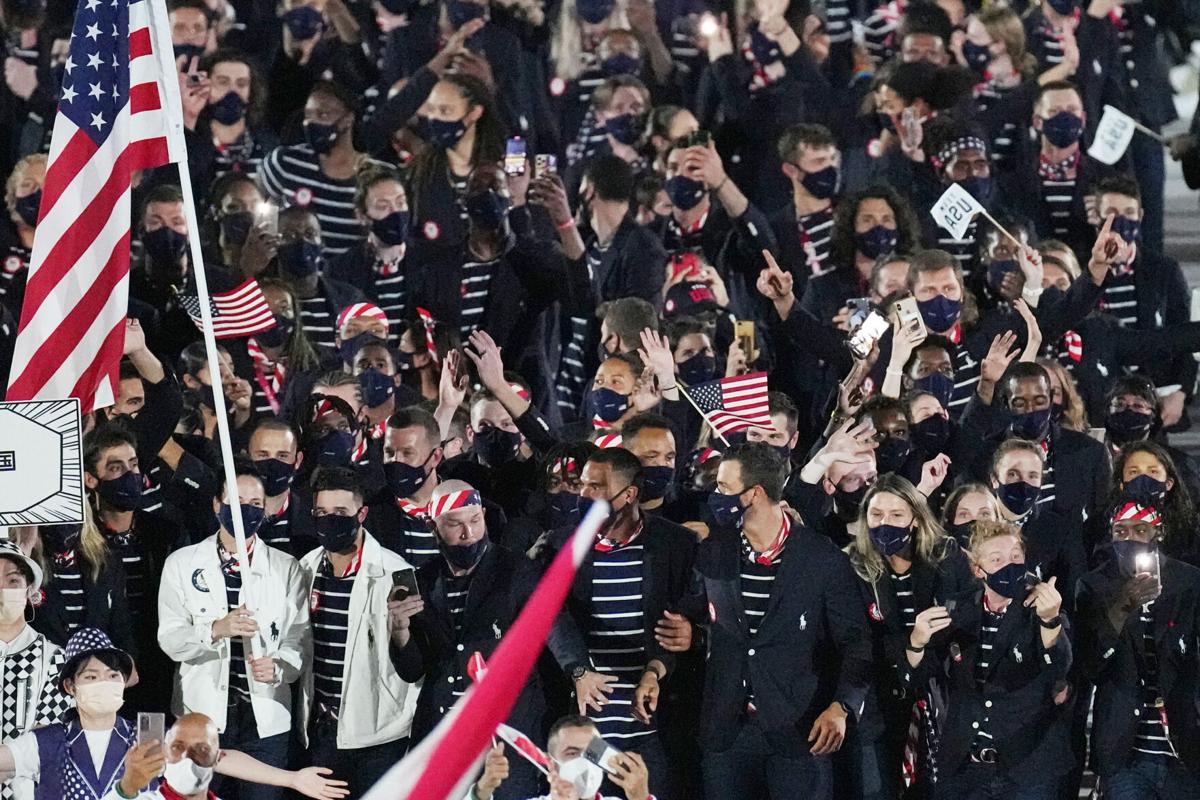 Athletes from the United States of America walk during the opening ceremony in the Olympic Stadium at the 2020 Summer Olympics, Friday, July 23, 2021, in Tokyo, Japan. Sue Bird and Eddy Alvarez carry the U.S. flag. 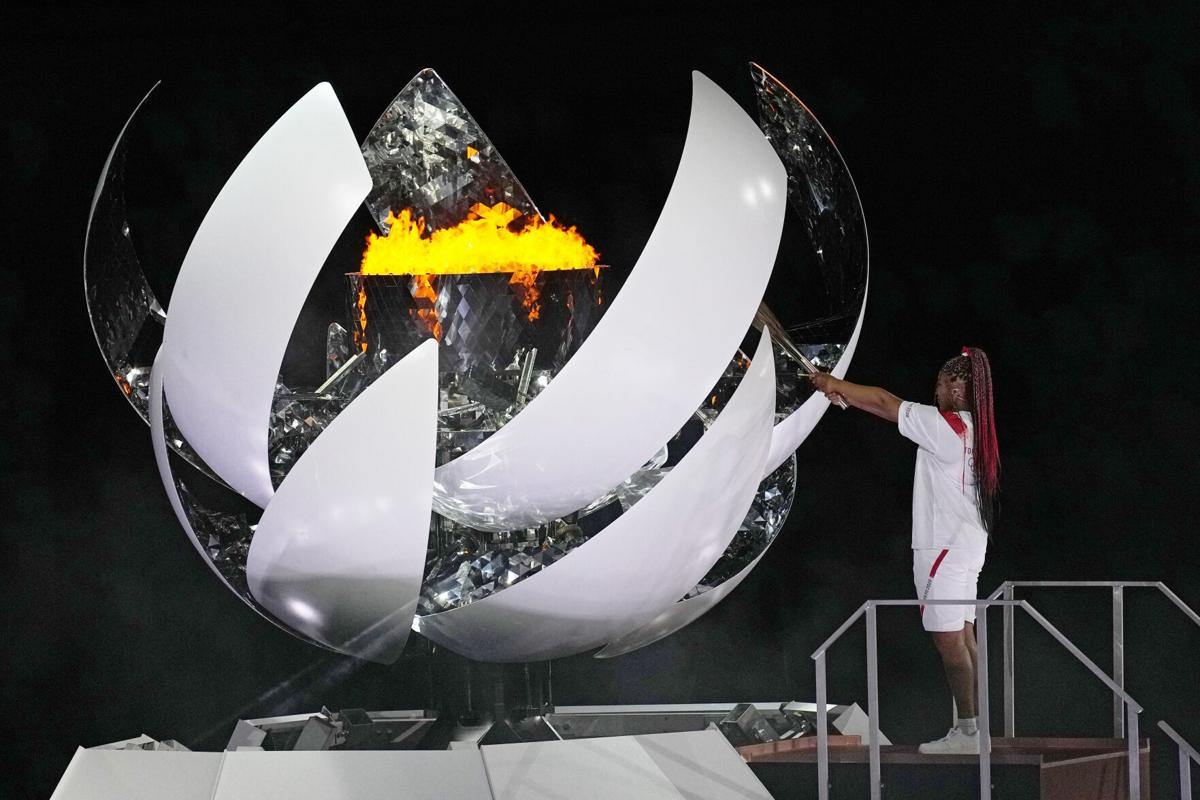 Naomi Osaka lights the Olympic flame during the opening ceremony in the Olympic Stadium at the 2020 Summer Olympics, Friday, July 23, 2021, in Tokyo, Japan.

Flint’s Mackenzie Brown is competing in her second Olympic Games in Tokyo.

Athletes from the United States of America walk during the opening ceremony in the Olympic Stadium at the 2020 Summer Olympics, Friday, July 23, 2021, in Tokyo, Japan. Sue Bird and Eddy Alvarez carry the U.S. flag.

Naomi Osaka lights the Olympic flame during the opening ceremony in the Olympic Stadium at the 2020 Summer Olympics, Friday, July 23, 2021, in Tokyo, Japan.

TOKYO — Belated and beleaguered, the virus-delayed Tokyo Summer Olympics finally opened Friday night with cascading fireworks and made-for-TV choreography that unfolded in a near-empty stadium, a colorful but strangely subdued ceremony that set a striking tone to match a unique pandemic Games.

The competition began earlier this week and on Friday Flint’s Mackenzie Brown placed fifth in the Women’s Archery Ranking Round. She scored 668 points to earn the No. 5 seed in the event at Yumenoshima Park.

South Korean archers topped the field with An San setting an Olympic record with 680 points. She was followed by Jang Min-hee (677) and Kang Chae-young (675). Mexico’s Alejandra Valencia was fourth at 668.

As the No. 5 seed, Brown will meet No. 60 Charline Schwarz of Germany (607 points) on Tuesday in the Round of 64 knockoff bracket of section 2.

Kaufhold will play No. 48 Inés de Velasco of Spain, while Mucino-Fernandez will take on No. 41 Anastasia Pavlova of Ukraine in the first round of Section 1.

If Brown wins she will play the winner of No. 28 Long Xiaoqing of China vs. Madalina Amaistroaie of Romania in the Round of 32, which is scheduled for Tuesday.

Later with the ceremony devoid of the usual crowd energy, the Olympics convened amid simmering anger and disbelief in much of the host country, but with hopes from organizers that the excitement of the sports to follow would offset the widespread opposition.

“Today is a moment of hope. Yes, it is very different from what all of us had imagined,” IOC President Thomas Bach said. “But let us cherish this moment because finally we are all here together.”

“This feeling of togetherness — this is the light at the end of the dark tunnel of the pandemic,” Bach declared. Later, Japanese tennis star Naomi Osaka received the Olympic flame from a torch relay through the stadium and lit the Olympic cauldron.

Trepidations throughout Japan have threatened for months to drown out the usual packaged glitz of the opening. Inside the stadium after dusk Friday, however, a precisely calibrated ceremony sought to portray that the Games — and their spirit — are going on.

Early in the ceremony, an ethereal blue light bathed the empty seats as loud music muted the shouts of scattered protesters outside calling for the Games to be canceled. A single stage held an octagon shape meant to resemble the country’s fabled Mount Fuji. Later, an orchestral medley of songs from iconic Japanese video games served as the soundtrack for athletes’ entrances.

Mostly masked athletes waved enthusiastically to thousands of empty seats and to a world hungry to watch them compete but surely wondering what to make of it all. Some athletes marched socially distanced, while others clustered in ways utterly contrary to organizers’ hopes. The Czech Republic entered with other countries even though its delegation has had several positive COVID tests since arriving.

“You had to face great challenges on your Olympic journey,” Bach told the athletes. “Today you are making your Olympic dream come true.”

Organizers held a moment of silence for those who had died in the pandemic; as it ticked off and the music paused, the sounds of the protests echoed in the distance.

Protesters’ shouts gave voice to a fundamental question about these Games as Japan, and large parts of the world, reel from the continuing gut punch of a pandemic that is stretching well into its second year, with cases in Tokyo approaching record highs this week: Will the deep, intrinsic human attachment to the spectacle of sporting competition at the highest possible level be enough to salvage these Olympics?

Time and again, previous opening ceremonies have pulled off something that approaches magic. Scandals — bribery in Salt Lake City, censorship and pollution in Beijing, doping in Sochi — fade into the background when the sports begin.

But with people still falling ill and dying each day from the coronavirus, there’s a particular urgency to the questions about whether the Olympic flame can burn away the fear or provide a measure of catharsis — and even awe — after a year of suffering and uncertainty in Japan and around the world.

“Today, with the world facing great challenges, some are again questioning the power of sport and the value of the Olympic Games,” Seiko Hashimoto, president of the Tokyo 2020 Organizing Committee, said in a speech. But, she said of the Games’ possibilities, “This is the power of sport. … This is its essence.”

Japanese Emperor Naruhito declared the Games open, with fireworks bursting over the stadium after he spoke.

Outside, hundreds of curious Tokyo residents lined a barricade that separated them from those entering — but just barely: Some of those going in took selfies with the onlookers across the barricades, and there was an excited carnival feeling. Some pedestrians waved enthusiastically to approaching Olympic buses.

The sports have already begun, and some of the focus is turning toward the competition to come.

Can the U.S. women’s soccer team, for instance, even after an early, shocking loss to Sweden, become the first to win an Olympics following a World Cup victory? Can Japan’s Hideki Matsuyama win gold in golf after becoming the first Japanese player to win the Masters? Will Italy’s Simona Quadarella challenge American standout Katie Ledecky in the 800- and 1,500-meter freestyle swimming races?

For now, however, it’s hard to miss how unusual these Games promise to be. The lovely national stadium can seem like an isolated militarized zone, surrounded by huge barricades. Roads around it have been sealed and businesses closed.

Inside, the feeling of sanitized, locked-down quarantine carries over. Fans, who would normally be screaming for their countries and mixing with people from around the world, have been banned, leaving only a carefully screened contingent of journalists, officials, athletes and participants.

Olympics often face opposition, but there’s also usually a pervasive feeling of national pride. Japan’s resentment centers on the belief that it was strong-armed into hosting — forced to pay billions and risk the health of a largely unvaccinated, deeply weary public — so the IOC can collect its billions in media revenue.

How did we get here? A quick review of the past year and a half seems operatic in its twists and turns.

A once-in-a-century pandemic forces the postponement of the 2020 version of the Games. A fusillade of scandals (sexism and other discrimination and bribery claims, overspending, ineptitude, bullying) unfolds. People in Japan, meanwhile, watch bewildered as an Olympics considered a bad idea by many scientists actually takes shape.

Japanese athletes, freed from onerous travel rules and able to train more normally, may enjoy a nice boost over their rivals in some cases, even without fans. Judo, a sport that Japan is traditionally a powerhouse in, will begin Saturday, giving the host nation a chance for early gold.

The reality, for now, is that the delta variant of the virus is still rising, straining the Japanese medical system in places, and raising fears of an avalanche of cases. Only a little over 20% of the population is fully vaccinated. And there have been near daily reports of positive virus cases within the so-called Olympic bubble that’s meant to separate the Olympic participants from the worried, skeptical Japanese population.

For a night, at least, the glamor and message of hope of the opening ceremonies may distract many global viewers from the surrounding anguish and anger.

“After more than half a century, the Olympic Games have returned to Tokyo,” Hashimoto said. “Now we will do everything in our power to make this Games a source of pride for generations to come.”