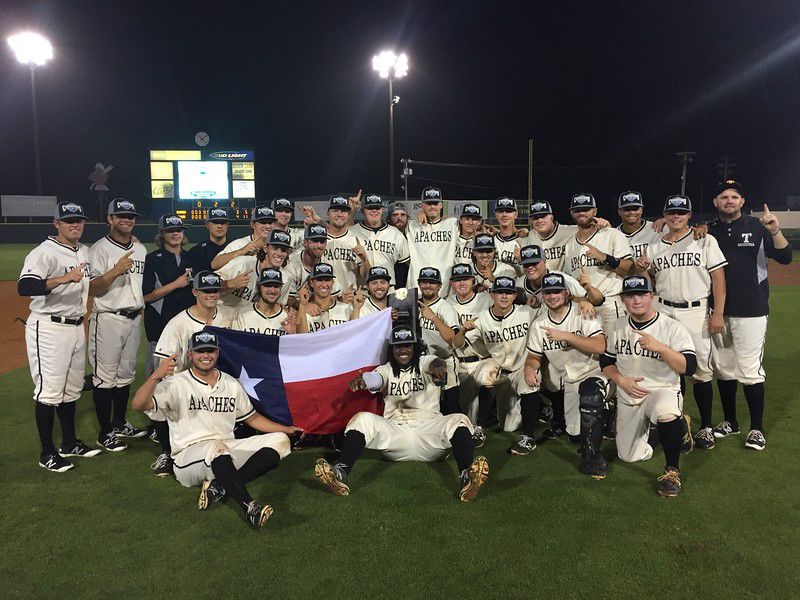 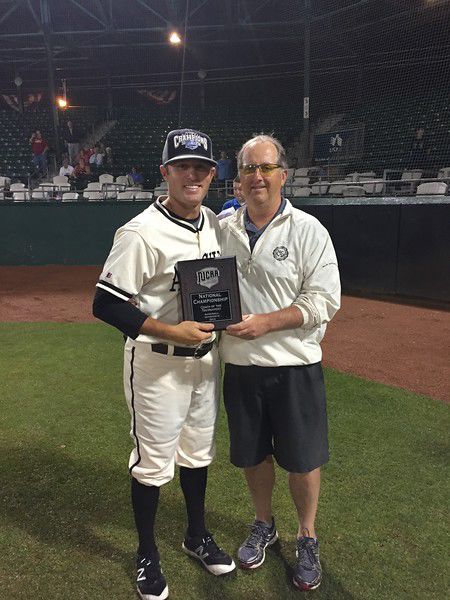 TJC's Doug Wren is presented the Coach of the Tournament award. 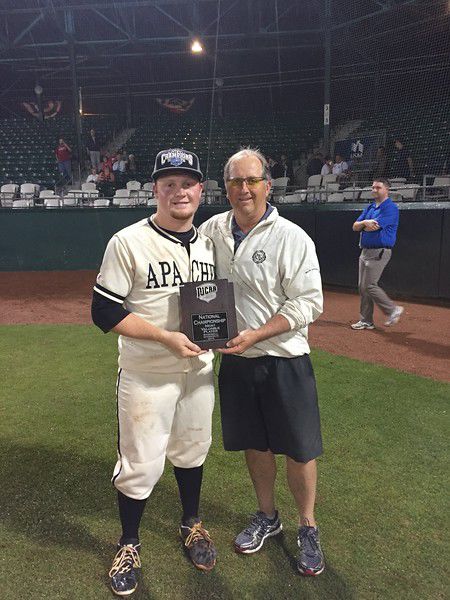 TJC's Doug Wren is presented the Coach of the Tournament award.

The Apaches rallied from a three-run deficit to score a 4-3 win over Northern Essex (Massachusetts) Community College on Wednesday to capture the NJCAA Division III World Series title at Grainger Stadium in Kinston, North Carolina.

TJC ace pitcher Jonathan Groff, who came on to record the final five outs for his first save of the season, was named the Most Valuable Player of the tournament, while the Apaches’ Doug Wren was named Coach of the Tournament.

TJC (42-16) finished 4-0 in the tournament and extended its postseason winning streak to 21 straight over three seasons.

“I’m extremely proud,” Wren said. “It’s funny, each championship is different, each group is different, but the common theme is the type of character kids we have had the last three years.

Indeed, the Apaches found themselves down 3-0 after the Knights took advantage of an error and a passed ball in the third inning.

TJC rallied for two runs in the fifth and two in the sixth to take the lead.

As throughout the tournament, Tyler’s pitching was stellar.

Austin Cernosek pitched one inning with two strikeouts, while Jace Campbell went 1/3 of an inning. With two runners and no outs, Campbell fielded a bunt and threw to third baseman Colton Whitehouse for the first out of the eighth. Then a hit batsman loaded the bases.

Groff, who pitched a complete game in the opening tourney win over Century (Minnesota) on Saturday, came into the contest with the bases loaded and one out in the top of the eighth.

The sophomore from Medina Valley High School struck out the next two batters to get out of the inning.

In the ninth, the Knights’ John Sirois reached on an error to lead off the inning, but Groff, who has signed with New Mexico State, struck out the next three batters and the Apaches dogpiled on the mound.

“Each championship is a lot of fun,” Wren said. “The rings are cool, the trophies are cool but the thing that excites me the most is these guys create some friendships and bonds through these championships that will never be taken away.”

Whitehouse and Brentten Schwaab had one apiece and Masotto had three RBIs.

Masotto and Whitehouse each had doubles.

Matthew Marquez led the Haverhill, Massachusetts team, with two hits, while Jordan Roper, Traverse Briana, Ellido Reyes and Colby Maiola had one each.

TJC got within 3-2 in the fifth as the first three Apaches - Wells, Mallard and Methvin - reached on singles to load the bases.

Masotto then singled to drive in Wells and Mallard.

However, the Apaches could not getting any more runs that inning.

They took care of that in the sixth with two runs.

Masotto doubled to plate Mallard and Methvin to give TJC the lead 4-3.

Masotto later came home on Whitehouse’s double, but the umpires ruled Whitehouse did not touch first base and negated the run.