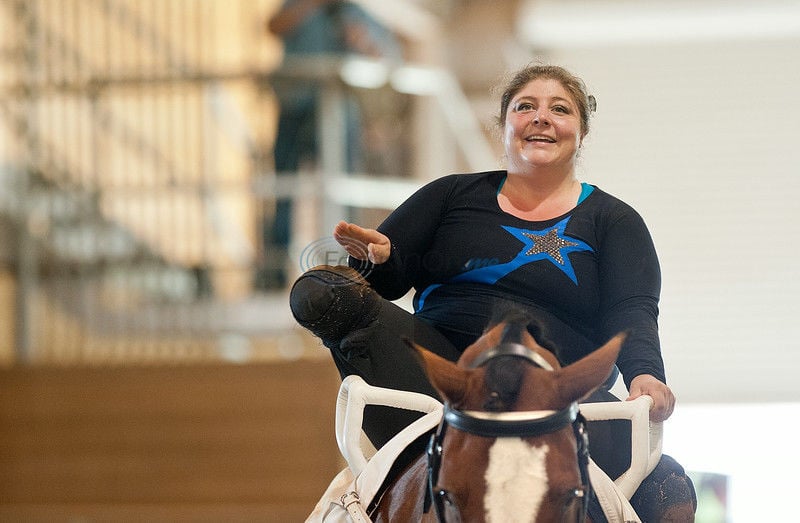 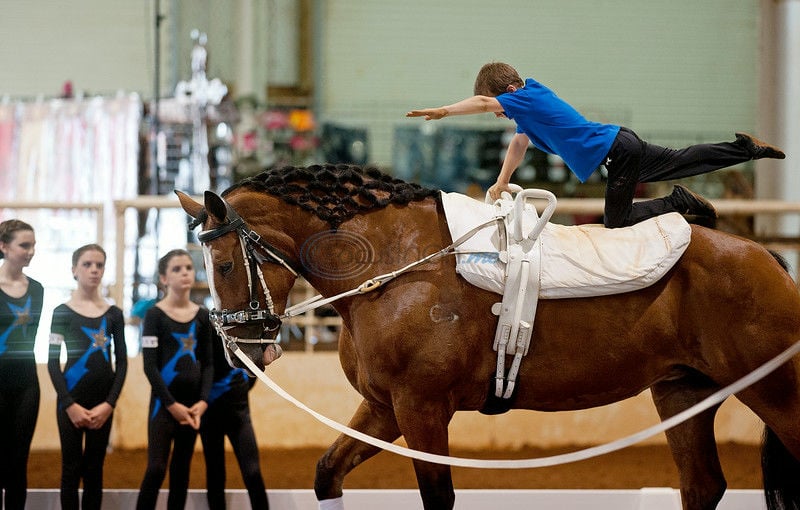 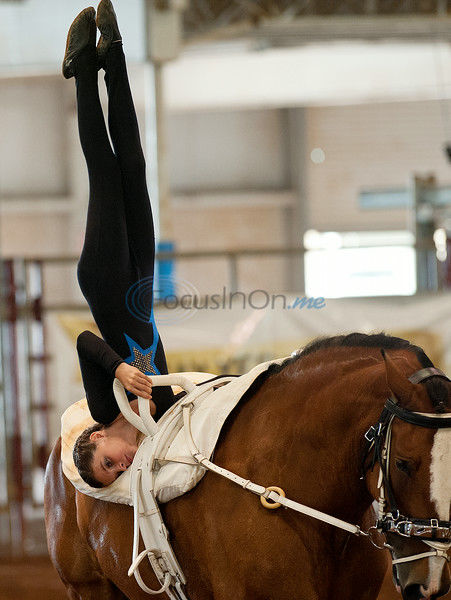 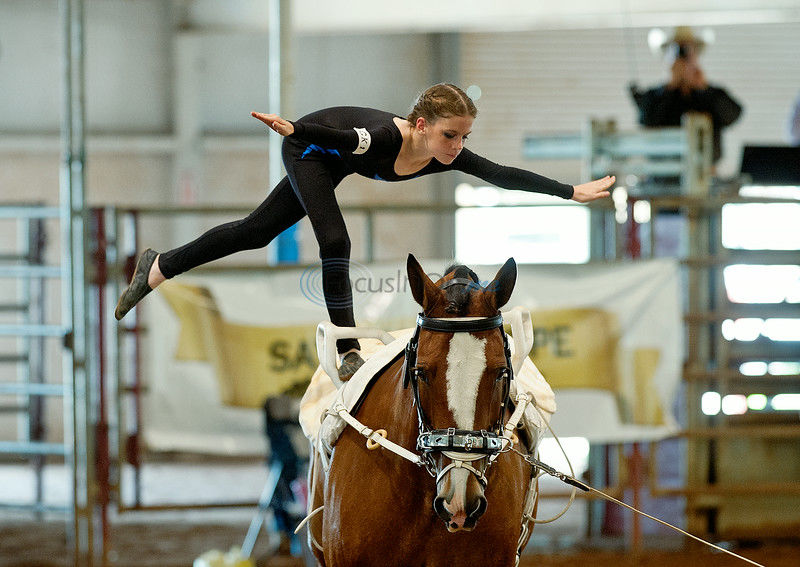 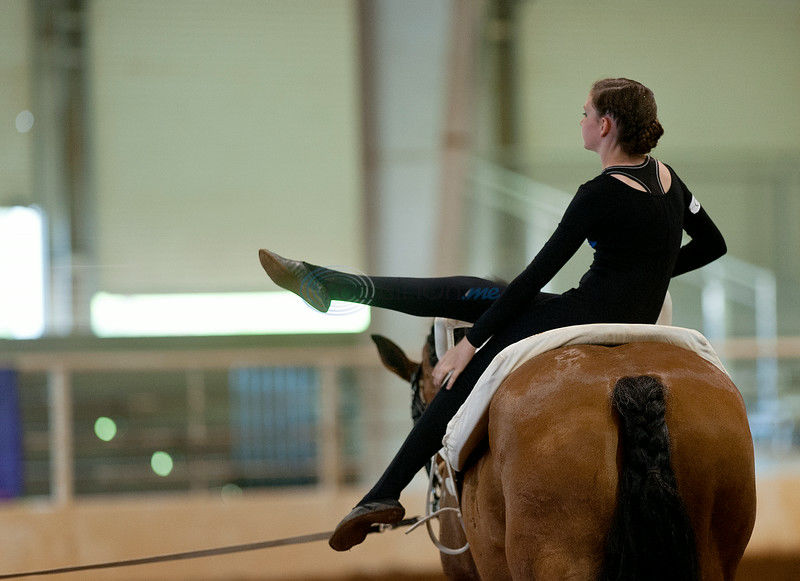 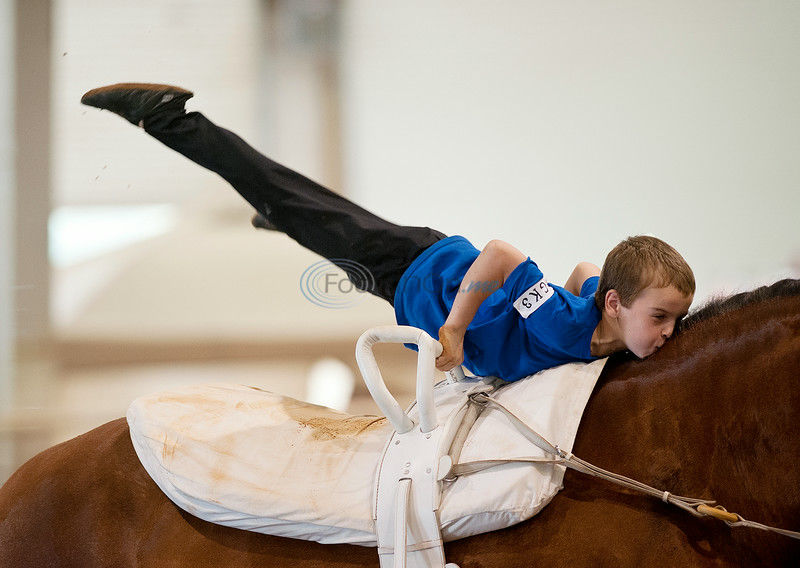 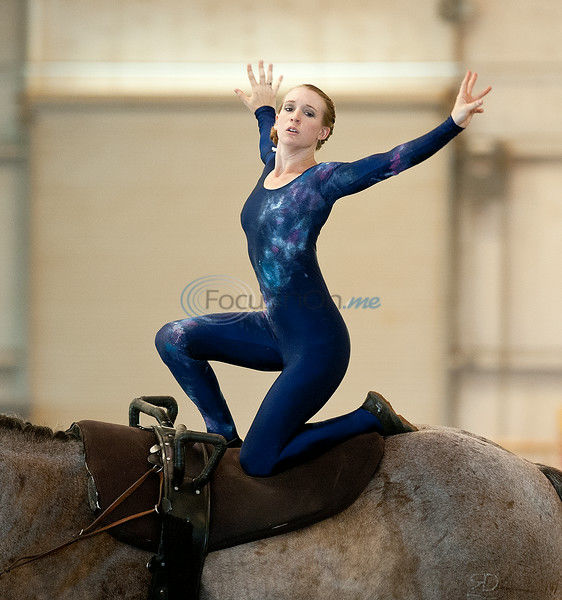 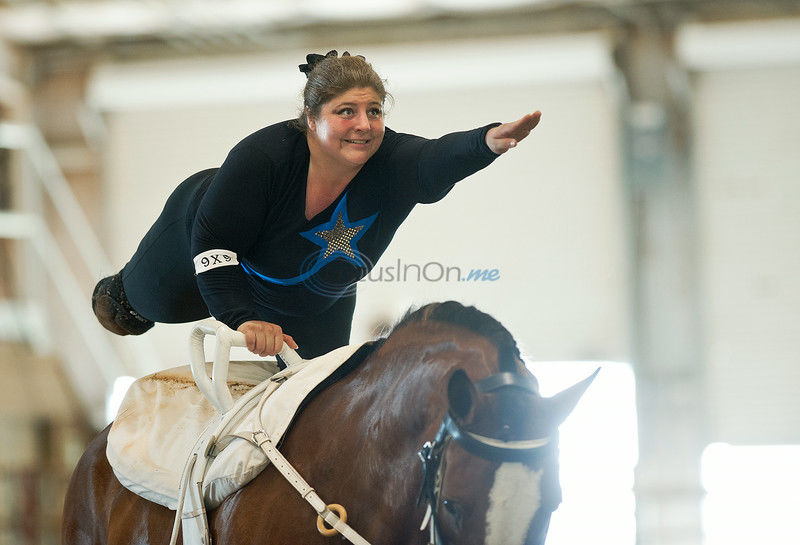 At 6 weeks old, Lyndsi Hardin rode on a horse with her mother for the first time and never stopped.

Hardin, 24, now competes in horse vaulting — a sport that combines gymnastics and dance elements on a cantering horse — as a member of the Gold Star Pacesetters, a vaulting club from Burleson.

The club had 14 members, ages 4 to 30, compete against five other vaulting clubs from around the nation at the Super Ride XII: International Festival of the Equestrian Arts 2014, last week at Texas Rose Horse Park, 14078 Texas Highway 110 West in Tyler.

This was the first year Super Ride had hosted a vaulting competition. The festival also included competition in drill teams, a group of horses and riders performing choreographed rides to music, and a performance by Escaramuza, an all-female sidesaddle competition with roots in Mexican history.

Vaulters competed in two rounds of competition: compulsory and freestyle. Compulsory tests require vaulters to perform seven exercises that are scored on a scale of one to 10. Freestyle tests are performed to music and allow vaulters artistic freedom in their performance.

Frank Pace, Pacesetters coach, started the club in 2007 with a couple of troubled teens in a high school class he taught. He discovered vaulting in the late 70s when a visitor from Germany stumbled upon his ranch.

For three to five years, Pace and his wife practiced vaulting.

"We did it just for pure fun but it helps the rider become a much better rider," he said.

Vaulting is one of the seven disciplines recognized by the International Federation for Equestrian Sports under global governance. Vaulters can choose to compete or perform demonstrations and can perform solo or in doubles or triples.

Hardin is a copper level vaulter who performs with a horse at canter speed. Beginning vaulters perform at walk and trot speeds.

She said vaulting takes horsemanship, strength, flexibility and artistry to come up with choreographed performances and costume ideas.

Hardin has practiced vaulting for almost three years after competing in other equestrian sports, such as barrel racing.

"I saw some vaulters compete and I fell in love with it and decided to give it a try," she said. "I've ridden horses my whole life and I've done different competitions with horses, but I've never done anything like vaulting."

Kendel Edmunds, Super Ride vaulting judge, said the perfect vaulter is a person who has riding experience because they understand the movement of the horse.

"If you take someone who is just a plain gymnast, they have no concept of the canter," she said. "In my mind, it's easier to train a rider than a gymnast to do this sport."

Edmunds began riding horses at 4 years old and became involved with vaulting at 12 years old in California in 1976.

"At some point I said I wanted to do gymnastics too and my mother said I couldn't because I had a horse," she said. "She sent me to horse camp one year and I discovered vaulting and was like, ‘Yes, I can do both.'"

In 1981, Edmunds helped revolutionize the sport when she became the first man or woman to perform a handstand in competition during her second trip to Europe to compete.

She retired from the sport at the age of 28.

Edmunds said she looks for good form, stretch and elevation in the exercises during the Super Ride competition.

Briana Bachus, 30, competed in independent walk for the Pacesetters. She said the category is for vaulters with physical disabilities.

Bachus lost both her legs below the knee in a car accident when she was 16. She said when she mounted a horse for the first time after her accident, she knew riding was all she wanted to do.

Her interest in horses began when she was 12, and evolved into riding and studying different equestrian sports. She's been vaulting for about two years.

"I wanted to improve my riding and what I read about vaulting, I knew it would improve my confidence with the rest of my riding sports," she said. "If I can ride backwards, ride standing up, then when I'm on a young horse, it's safer to ride."

He said in the seven years he's been coaching, he's only seen two injuries.

Pace said safety is incorporated as vaulters progress and is stressed, especially when dismounting a horse. Vaulters start off on mounted barrels and work their way up to riding horses at canter speed.

Hardin said although safety is always an issue around horses, it becomes safer when vaulters practice all their moves on barrels ahead of time.

"By the time we do a move on a horse, we're strong enough to do it," she said. "An accident can still happen because horses can be unpredictable, but it's a lot safer than you think it is."

Hardin said she injured her shoulder when she first started vaulting.

"I had torn it in an old riding incident and I didn't have much upper body strength, so I fell and tore it again," she said. "That really wasn't completely vaulting's fault because it was injured before."

Edmunds said the best vaulter is someone who's fearless.

"You have to go out there and just be willing to try stuff because it's (falling off the horse) going to happen," she said. "You're standing, you're standing on one foot and jumping so you have to be fearless."