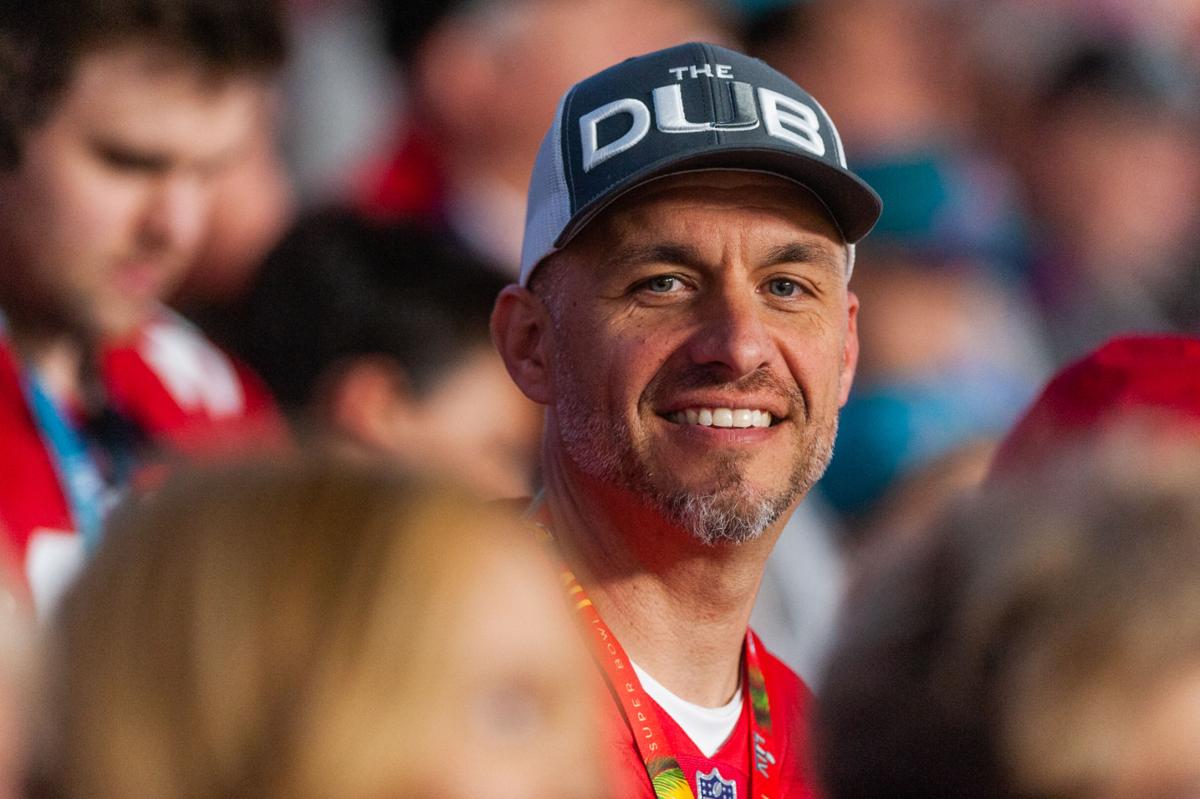 Adam Cook, Patrick Mahomes’ high school football coach at Whitehouse High School, sits in the stands to cheer Mahomes and the Kansas City Chiefs on during Super Bowl LIV action against the San Fransisco 49ers on Feb. 2 at Hard Rock Stadium in Miami. 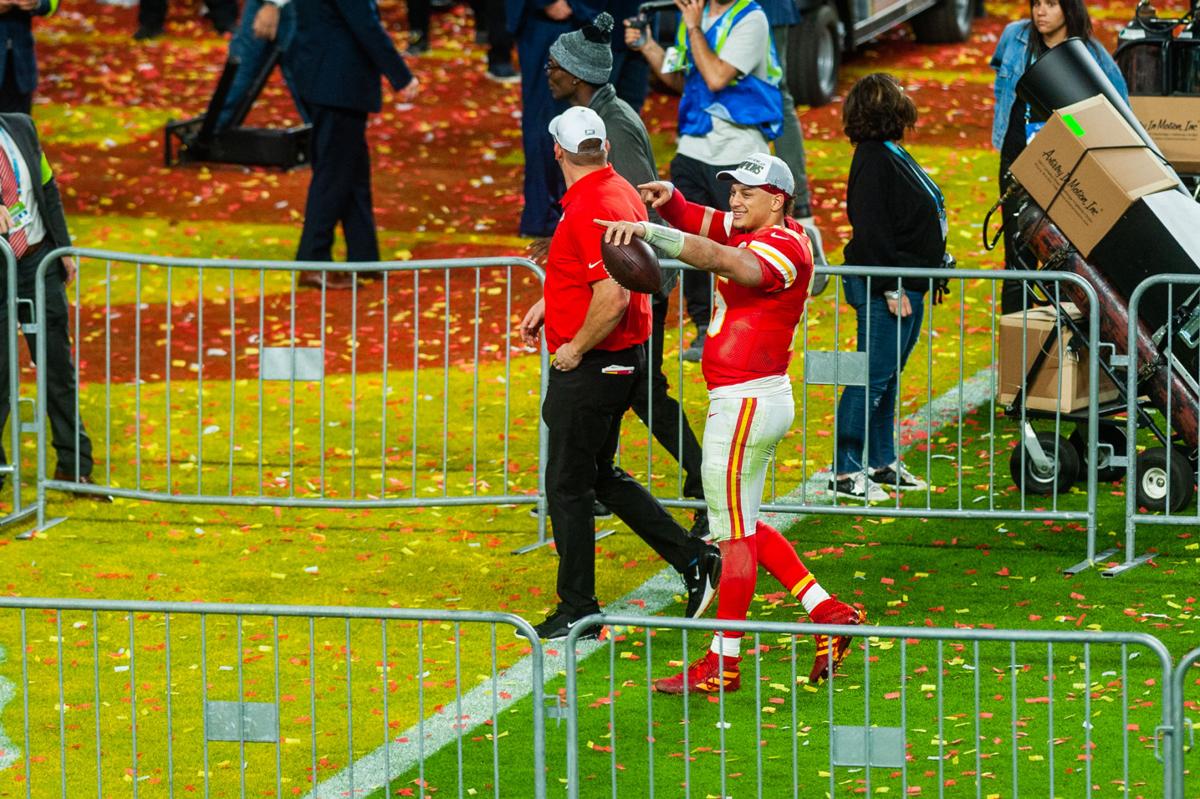 Kansas City Chiefs quarterback Partick Mahomes (15) points to Coach Cook and then his childhood friends in the stands after leading his team to a Super Bowl LIV championship win over the San Fransisco 49ers on Feb. 2 at Hard Rock Stadium in Miami. 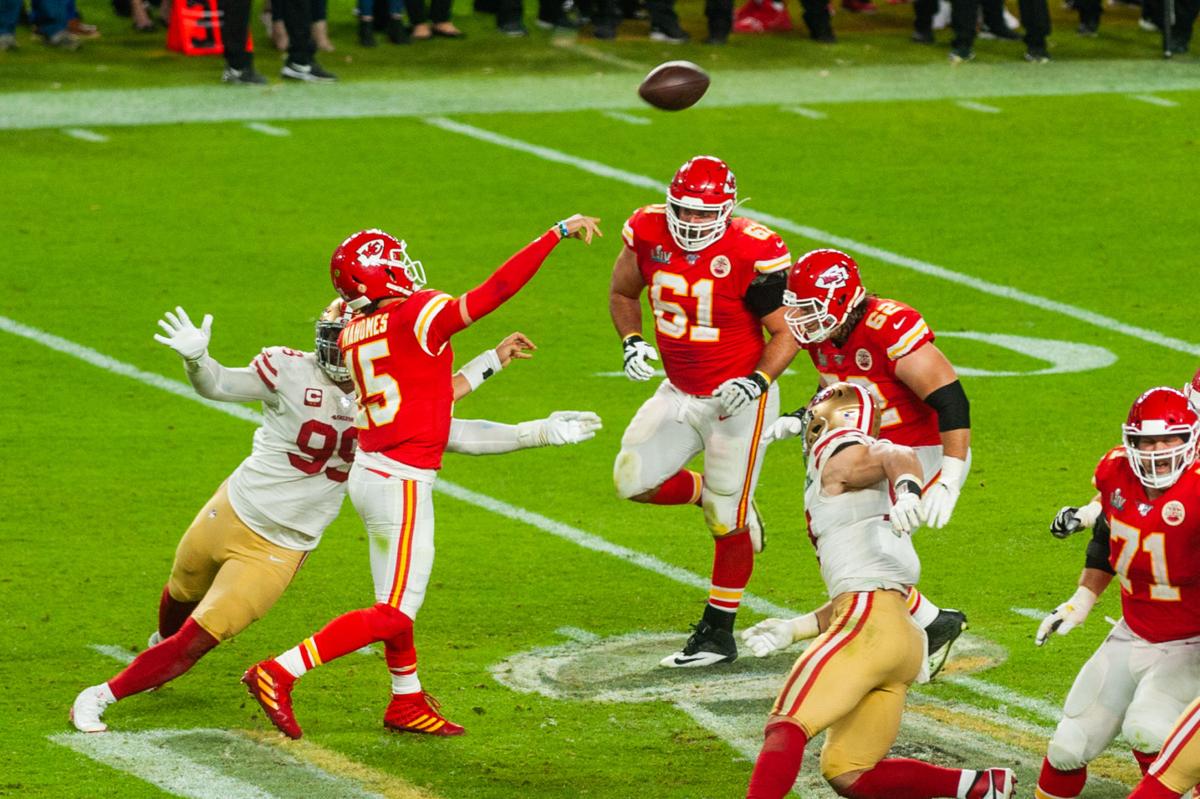 Tyler Morning Telegraph photographer Cara Campbell catches the moment Patrick Mahomes completed this near-impossible third-down play to Tyreek Hill in the Super Bowl, just as he was hit. He completed the pass, erased a 10-point deficit and the Kansas City Chiefs won the Super Bowl. 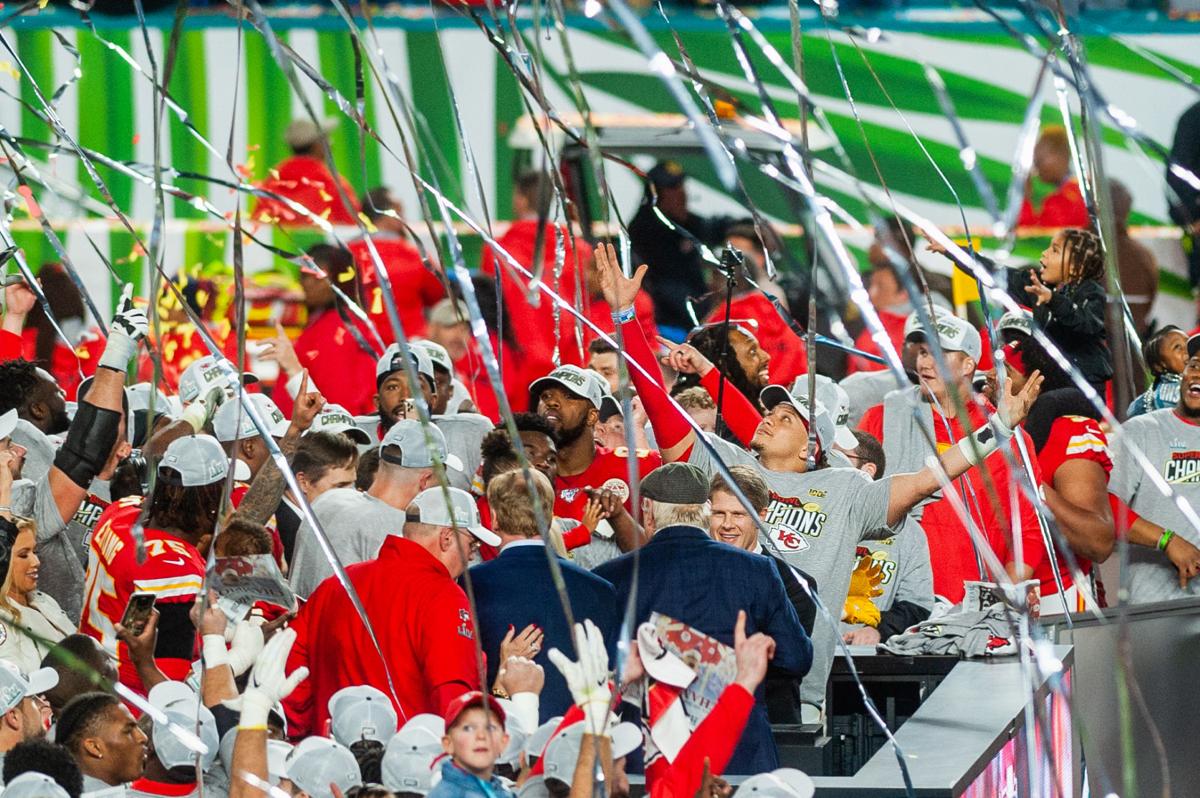 Kansas City Chiefs quarterback Partick Mahomes (15) look on with open arms as confetti falls down around him after leading his team to victory in a Super Bowl LIV Championship win over the San Fransisco 49ers Sunday, Feb. 2, 2020, at Hard Rock Stadium in Miami, Florida. (Cara Campbell/Tyler Morning Telegraph) 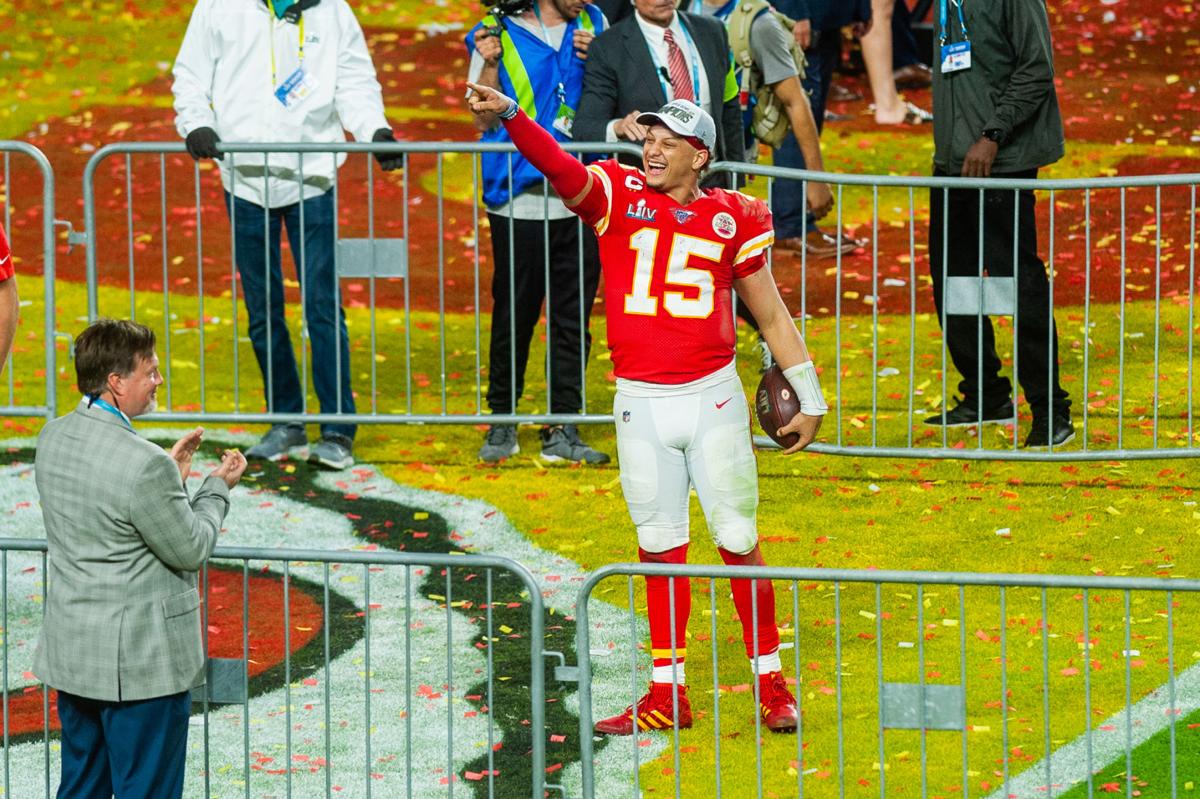 Adam Cook, Patrick Mahomes’ high school football coach at Whitehouse High School, sits in the stands to cheer Mahomes and the Kansas City Chiefs on during Super Bowl LIV action against the San Fransisco 49ers on Feb. 2 at Hard Rock Stadium in Miami.

Kansas City Chiefs quarterback Partick Mahomes (15) points to Coach Cook and then his childhood friends in the stands after leading his team to a Super Bowl LIV championship win over the San Fransisco 49ers on Feb. 2 at Hard Rock Stadium in Miami.

Tyler Morning Telegraph photographer Cara Campbell catches the moment Patrick Mahomes completed this near-impossible third-down play to Tyreek Hill in the Super Bowl, just as he was hit. He completed the pass, erased a 10-point deficit and the Kansas City Chiefs won the Super Bowl.

Kansas City Chiefs quarterback Partick Mahomes (15) look on with open arms as confetti falls down around him after leading his team to victory in a Super Bowl LIV Championship win over the San Fransisco 49ers Sunday, Feb. 2, 2020, at Hard Rock Stadium in Miami, Florida. (Cara Campbell/Tyler Morning Telegraph)

MIAMI — The biggest play of the Super Bowl was not a touchdown, rather a conversion on a 3rd-and-15 to keep a drive alive in the fourth quarter by the Kansas City Chiefs.

And it may have been the result of a freshman in Whitehouse in 2009 charting plays on the sidelines instead of running around in the stands with his friends during the varsity games.

Two weeks before the Super Bowl, Chiefs quarterback Patrick Mahomes ran for a 27-yard touchdown to lift the Kansas City Chiefs into the Super Bowl over the Tennessee Titans. It was called the best touchdown run in playoffs history.

The Whitehouse graduate only needed two weeks for everyone to forget about that play and talk about another one. However, this one did not result in a touchdown.

If the Chiefs do not get a first down? They punt and the game is probably over.

Chiefs Kingdom fans in attendance were on the edge of their seats. A large group had no idea who these two guys were making football analogy comments all game like a couple of radio talk-show hosts.

The one guy was Adam Cook, Mahomes’ high school football coach at Whitehouse, who was sitting in section 221, row 4, seat 10. His conversations were with the guy in seat 14, Kliff Kingsbury. No one recognized Kingsbury, the head coach of the Arizona Cardinals. He recruited Mahomes at Whitehouse when Cook coached and eventually landed the prize recruit to play for him at Texas Tech.

“We looked at each other and I said, ‘This is where legends are made,’ “ said Cook.

Not only did Mahomes call the play, he threw the ball 57.1 yards in the air, farther than any ball he threw all season.

And he didn’t even step into the throw.

Anyone who watched Mahomes throw fastballs on the baseball fields in East Texas knows his arm. Over 150 million watching the Super Bowl know as well.

Thanks to Mahomes being mic’d up at the Super Bowl by NFL Films, a video with over 2.5 million total views shows Mahomes asking Chiefs offensive coordinator Eric Bieniemy to run the play. And head coach Andy Reid agreed.

The result was a first-down completion to Tyreek Hill that led to a touchdown, cutting the San Francisco lead to 20-17. Mahomes would then lead KC on two more scoring drives and a 31-20 victory. But the play was the reason for a 21-point outburst in the last seven minutes.

Mahomes told the national media after the game, “In high school, Coach Cook at Whitehouse was the first to let me be who I am.” He said Cook’s confidence in Mahomes carried on to Texas Tech with Kingsbury and the NFL under Reid.

Before “The Play” took place, video shows Mahomes asking Bieniemy to run the “wasp” play, which has three wide receivers on one side, running three different ways.

It appeared Mahomes was told the play was designed for a shorter yardage situation and maybe on a first down.

Mahomes had run the play against the Patriots the year before in the AFC championship game for a first down, but he completed the pass with zero pressure from the New England defensive line.

In the Super Bowl, the 49ers were putting tremendous pressure on Mahomes all game.

Sure enough, Mahomes could not step into the throw with DeForrest Buckner and Joey Bosa coming at him. He had been knocked down all game. He knew he would be hit again, but wanted to run the play. It was time for “Tre Right, Three Jet Chip Wasp.”

Mahomes then started pumping up his teammates.

The 24-year-old quarterback turned to Hill just before they broke the huddle and said, “you get open ... you be working.”

He had four seconds to get the throw off. He dropped back 14 yards to give himself that fraction of a second longer. Sure enough, there was Buckner at 6-foot-7 with 287 pounds of muscle drilling Mahomes in the ribs and dropping him to the ground.

But Mahomes, who would have been sacked if he took a step to throw, chucked the ball in the air, looking like a fly ball over a left field fence.

Into the arms of Hill.

First down. The smiles and confidence on the faces of the San Francisco 49ers players and coaches went away. “The guys around him believed him, we all did ... he kept firing,” said Hill. “It was Pat being Pat ... he said to believe.”

Mahomes may have been hit, but he made sure he gave credit to his line.

“We got good protection by the offensive line,” he said. “They gave me enough time, and I put it out there and Tyreek made a great play.”

“I thought back to his days in high school, we worked really close on the sidelines with Patrick and the receivers, we would ask, ‘What do you guys see and what has opened up?’ Several times he would say ‘Look at this play’ or that play,” said Cook.

That trust started four years earlier on the same sidelines.

“As a freshman he was charting plays,” said Cook. “He would write down all the plays, the downs and the results and we used that information at halftime. We would look at it and say, ‘We need to come back to this play, on first down, this worked,’ or we would see something on second down that worked.

“When I saw the third down play, I thought ‘That looks so much like Patrick.’ Maybe that was a play he ran before and he wanted to go back to? Maybe he saw Tyreek one-on-one with the safety? But I could tell that was Patrick looking back and recognizing that play,” Cook added.

Cook, who is now the athletic director at Whitehouse, sounded like a coach once again.

“At that point in the game, the second down catch went to a review and the Chiefs didn’t get it, that was a crucial situation,” he said. “They were down two scores. If they get to fourth down, they have to go for it. That’s a pivotal play. Tyreek, he had not had a big play yet. All year when they stretched the field vertically, that opened up things underneath. They got him some screens early in the game, he tried to juke, but nothing was working. So that was a huge play for them.”

“I was humbled and proud. Coaching Patrick was a once-in-a-lifetime opportunity. He is a phenomenal athlete,” said Cook. “All the different reporters from all over the country have called and wanted to talk about Patrick and what he has done.”

To be at the game and be there with Coach Kingsbury and players from Whitehouse was a special time,” Cook continued. “Everything he does is out of the structure of the play, it’s not the typical, ‘He is going to run to this spot.’ A lot of the plays Patrick makes is out of that structure, he buys time and the receiver can break out of a route or come back to him.

“That was something we did, we allowed Patrick to be Patrick. As a play-caller, as a head coach, I allowed him to play out of that structure. Some coaches say ‘Take a three-step drop and it will be there.’ But sometimes it’s not there. Coach Kingsbury then let him do several others things and even more as a coach,” Cook added.

Cook said he gets talked about a lot, but is quick to mention, “There were a lot of great coaches on Patrick’s Whitehouse staff who worked with him. You also had the receiver coaches who knew what he was doing and talked to Patrick and the receivers so plays would work later in the game.”

For anyone who has coached a sport, from kids age 5 to 18, you wonder if you make a difference.

The problem is, 99.9 percent of the kids who play youth sports and had a positive role model never get a chance to stand at a podium the morning after a Super Bowl and give you thanks.

Patrick Mahomes did just that.

In the Super Bowl, he completed the biggest play of the season on a third down and followed that up with a touchdown. Mahomes then raced down the sidelines and yelled to his teammates, “It’s not over! Let’s get it, it’s not over, go get it, go get it!”

John Anderson is the editor of the Tyler Morning Telegraph. He can be reached at janderson@tylerpaper.com.

For it has been granted to you on behalf of Christ not only to believe in him, but also to suffer for him