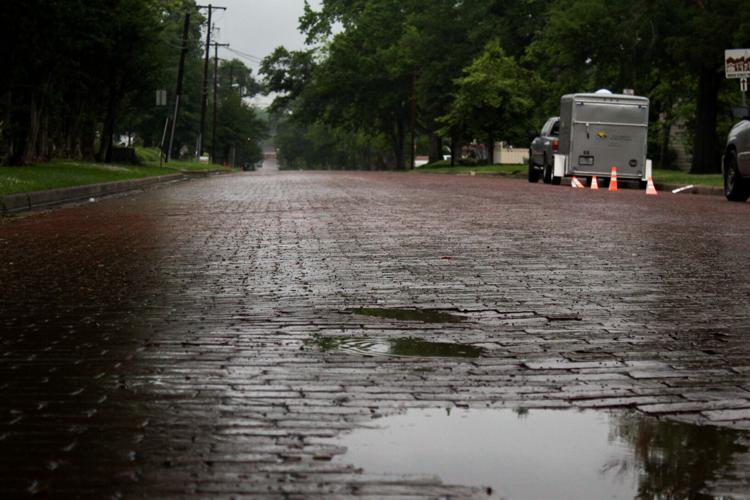 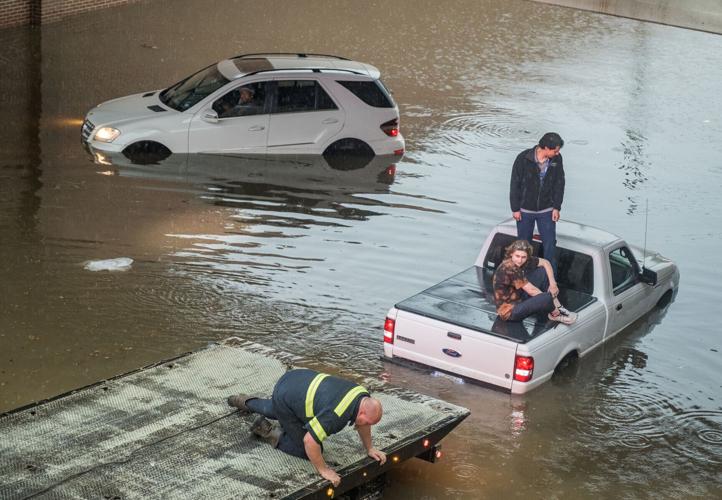 In Longview, a tow truck driver attempts to help motorists Thursday stranded in flood waters under the High Street bridge between Cotton and Tyler streets. 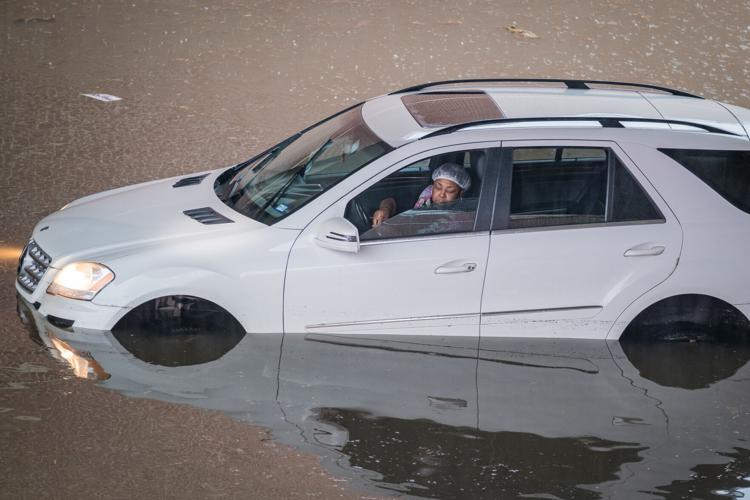 A motorists stranded in their vehicle under the High St. bridge Thursday, May 5, 2022, in downtown Longview. (Les Hassell/News-Journal Photo)

In Longview, a tow truck driver attempts to help motorists Thursday stranded in flood waters under the High Street bridge between Cotton and Tyler streets.

A motorists stranded in their vehicle under the High St. bridge Thursday, May 5, 2022, in downtown Longview. (Les Hassell/News-Journal Photo)

Storms moving through East Texas on Thursday caused damage from at least one likely tornado in Rusk County and drenched the region.

The weather system prompted a series of National Weather Service tornado warnings in Rusk County, one in Panola County, a tornado watch throughout Northeast Texas for much of the day and various severe thunderstorm warnings in Smith and surrounding counties.

“Crews are out surveying damage in the Church Hill and Mount Enterprise area, from what we believe were two separate tornadoes,” the office said in an afternoon post on its Facebook page. “Fortunately as of now, we haven’t had any serious injuries reported.”

Rusk County Sheriff Johnwayne Valdez said there is a lot of debris throughout Rusk and Panola counties, according to Tyler Morning Telegraph news partner CBS19. The sheriff asked residents to stay off the roads as crews continued to search the area with trees down and water over some roads.

The office of emergency management also said it was working to be sure all impacted Rusk County residents had a safe place to stay for the night and that injuries were so far limited to one person who was hit by a tree.

“We’re very pleased to report only one resident sustained non-life threatening injuries from being hit by a tree,” the office wrote on Facebook. “No fatalities or other injured persons have been identified.”

In Smith County, officials said there was no major damage reported as of Thursday afternoon in the city or countywide. However, officials urged motorists to use caution in case there is high water on any area roads. Residents should also look out for any downed power lines and stay away.

Nearly 2,000 Oncor customers were without power in Smith County at one point Thursday, but by early evening power had been restored to hundreds of homes. About 200 remained without power as of 6 p.m. Thursday.

Over in Longview, emergency crews responded to several water-rescue calls as heavy rains caused some areas to flood.

Two vehicles were stranded on High Street between Cotton and Tyler streets. On one, a small-size pickup, two occupants stood on the bed as floodwaters reached near the top of the truck’s tires.

Shortly before 2 p.m., Longview police reported the underpasses of the bridges at Nelson and Cotton streets along Green Street were closed due to flooding along with the underpass on High Street under the train bridge.

Police also reported minor flooding on Spur 63 at Cotton Street and along the 400 block of East Marshall Avenue.

The National Weather Service forecast sunny skies for today in the Tyler area with mostly clear skies for the next several days as temperatures as expected to rise to the mid-90s.

“For you created my inmost being; you knit me together in my mother’s womb. I praise you because I am fearfully and wonderfully made; your works are wonderful, I know that full well.” (Psalm 139:13-14)