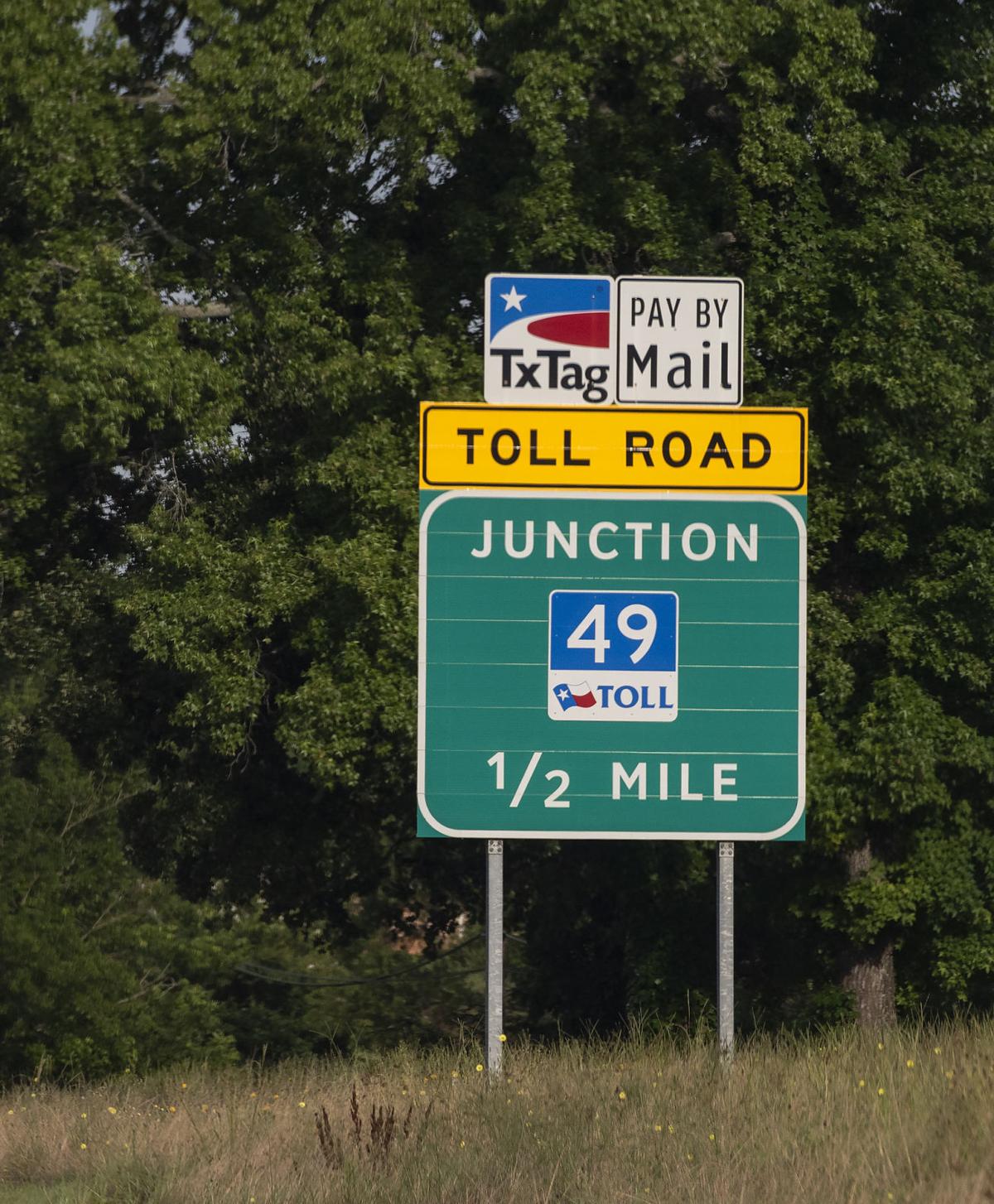 Plans are underway to extend Toll 49 northward, toward Interstate 20 in the eastern part of Smith County. (Sarah A. Miller/File) 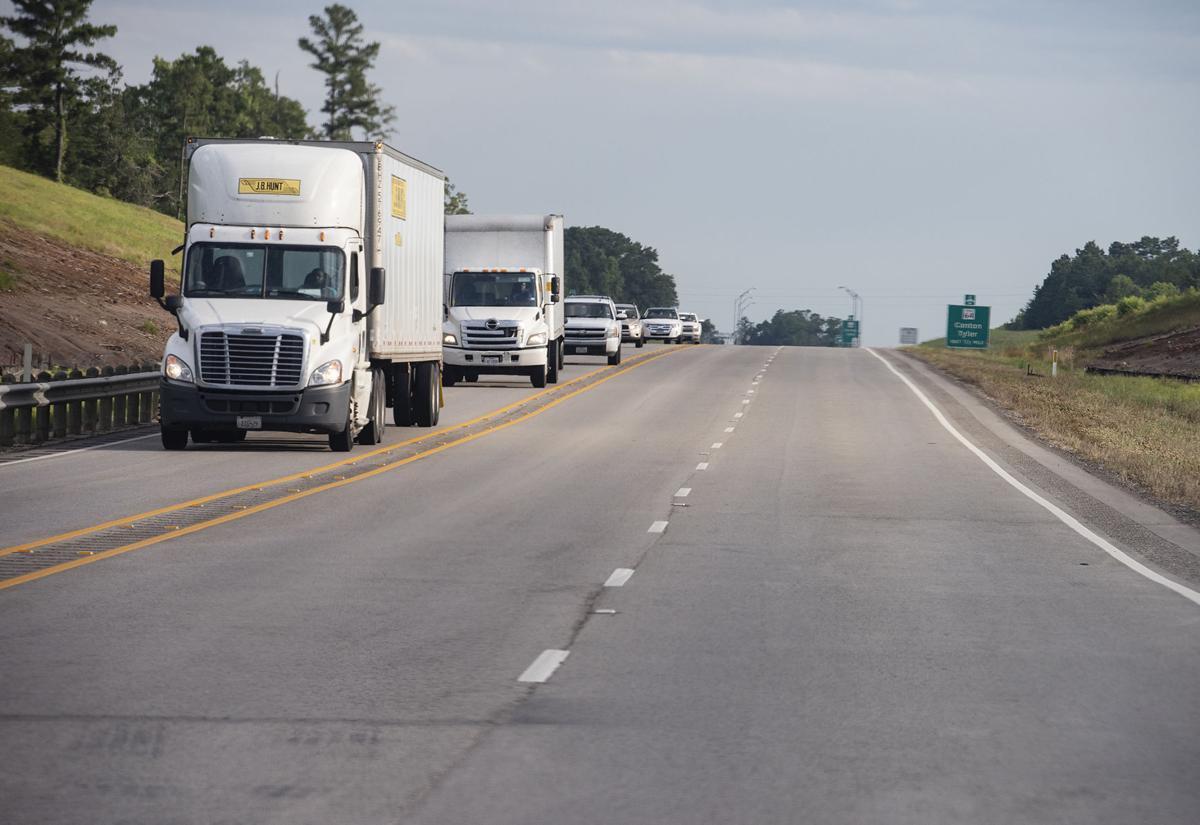 Traffic heads south from Texas Highway 64 on Toll 49 in Tyler earlier this summer. The route for the extension of the road in the eastern part of Smith County is being studied.

Plans are underway to extend Toll 49 northward, toward Interstate 20 in the eastern part of Smith County. (Sarah A. Miller/File)

Traffic heads south from Texas Highway 64 on Toll 49 in Tyler earlier this summer. The route for the extension of the road in the eastern part of Smith County is being studied.

Property rights, traffic safety and environmental impact are on the minds of people in the eastern part of Smith County as a government agency considers how to build the final portion of an outer loop around Tyler.

The portion of the road is called Segment 6 and would extend Toll 49 from an intersection with Texas Highway 110 near Whitehouse to the northeast corner of Smith County, somewhere near U.S. Highway 271 and Interstate 20.

The road has been built in pieces since 2004 in an effort to create an “outer loop” for Tyler that starts at Interstate 20 in Lindale and moves south in a horseshoe shape around Tyler city limits, with plans to come north to Highway 271 or I-20.

For years, the eastern side of the outer loop was theoretical. Now, as the Northeast Texas Regional Mobility Authority moves forward with planning, the agency has been seeking public feedback on six different routes the road could take in eastern Smith County.

The routes are color-coded. Purple is the farthest west of the options, followed by yellow and teal. A pink route would travel farther east, but avoid Pleasant Acres Lake and Chapel Hill High School. Blue and orange are the farthest east and go through the city of New Chapel Hill.

“We are in the midst of a multiyear comprehensive evaluation process to identify the best possible route for an extension of Toll 49,” Chris Miller, the executive director of NETRMA, said in a prepared statement. “Public interest in this study has been notable and we value the input of those we are here to serve.”

An informal consensus has formed around keeping the road as far west as possible. The movement is led by Keep Loop Off Lake, a group of about 450 people that has raised concerns about pollution in Lake Tyler, public safety and loss of homes.

“We’re trying to look out for our community and be proactive and be a part of the process and make sure the right route for community preservation and the development of Tyler is chosen,” said Christina Allen, 29, of Whitehouse, who is involved in the group.

Allen said one of the concerns is having Toll 49 go over Prairie Creek, a tributary to Lake Tyler, which is a primary source of drinking water for Tyler. She said she does not want automobile accidents to happen that affect the creek or the lake.

The city of Tyler gets about two-fifths of its drinking water from Lake Tyler, according to water utilities systems manager Kate Dietz. However, she said the city does not anticipate any problems with water in the event a highway were built over the lake.

“Both of the water treatment plants are conventional treatment facilities, with coagulation/flocculation, sedimentation, filtration and disinfection,” Dietz said in an email.

The Keep Loop Off Lake group has proposed an alternative route, calling it the green route, that would be a combination of the yellow, purple and teal routes. The group’s website says that route also would save homes from being taken via eminent domain.

The Fifth Amendment to the U.S. Constitution allows the government to use eminent domain to take private property for public use, but requires “just compensation.” Governments typically use a process to establish the fair market value of a piece of property and then buy the land from landowners.

“I’m saying no to the blue and orange segments because it affects about 100 landowners in that area, residents who have been there for years and years, and it also affects this Prairie Creek that runs through my property,” said Mary Lou Tyer, 85, of New Chapel Hill.

Tyer said she owns 300 acres near Texas Highway 64 that she plans to pass down to her children. She doesn’t want to see the blue or orange routes happen because they would come right through her property and disrupt the wildlife. She also has environmental concerns.

“If I was to come out my driveway and turn right, and they were to choose a route coming through my area, I probably would have to go under an overpass to get to Walmart,” said Jeanne Holloway, 69, of New Chapel Hill.

“If you’re trying to do it for people who live along the lake, you’ve already heard from them.”

Riley Harris, the mayor of New Chapel Hill, said he shares the property and environmental concerns. He also doesn’t want the new road to come through New Chapel Hill, which would happen if the blue or orange routes were chosen.

“It comes through the watershed to Lake Tyler, so there’s a risk there of polluting the lake continually,” Harris said. “And then it’s just longer and disrupts more homes so it would cost more.

“And just the total length of it, the cost of it would be a lot more because it would be a lot longer,” he said. “All of those issues are issues that they look at when they’re trying to evaluate where to put it, so I think it will be disqualified.”

Tom Mullins, the CEO of the Tyler Area Chamber of Commerce and Tyler Economic Development Council, said his organizations want Segment 6 to be completed, but he said they are not advocating for a specific route because that should be an engineering decision.

Mullins also praised the people who are raising concerns. He said a group that opposed the original Loop 49 project decades ago, Citizens Opposed to the Outer Loop, rejected the entire concept of the highway and fought tooth and nail to stop its funding.

“I’m impressed that the majority of people on the east side who have been contacting us have said — they understand the need for it, and we would like to have it go up to 271, we would just like to have the design not impact our property,” Mullins said.

Mullins said major employers in the area support the Toll 49 expansion, especially those involved in trucking and logistics. One of Tyler’s biggest institutions also has weighed in.

“Segment 6 will reduce traffic congestion on East Loop 323 as well as Highway 110,” said Ted Crabtree, a vice president for Ingersoll Rand, which owns Trane, located on Troup Highway in Tyler. “This will be a big aid to our business and employees. The route chosen for this segment should be the least impactful on the residents of Smith County and the environment.”

Michael Tidwell, the president of the University of Texas at Tyler, sent a letter to NETRMA on Aug. 8 asking for the Toll 49 expansion to be as close as possible to the university. The potential routes were purple, yellow, teal or recently developed green route.

“It is vital for UT Tyler to have transportation infrastructure to support this growth,” Tidwell wrote, citing increasing enrollment.

“These routes are located closest to UT Tyler, which will enable our students, families, faculty, staff and visitors to safely travel to and from our campus,” Tidwell wrote.

Elizabeth Story, the project manager on Segment 6, said in a prepared statement that her team is listening. “We want to hear all voices as we work to identify the best possible route,” Story said. “As we continue moving forward, we welcome all comments from the community.”