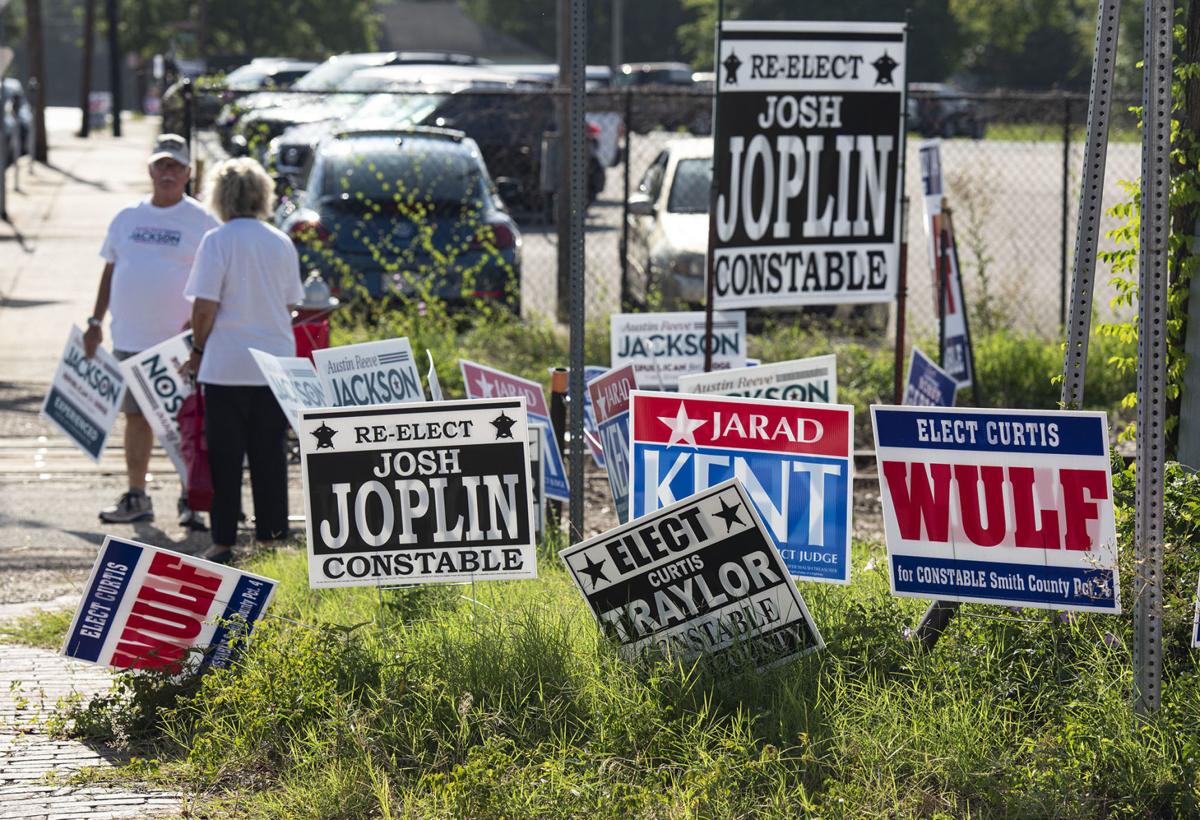 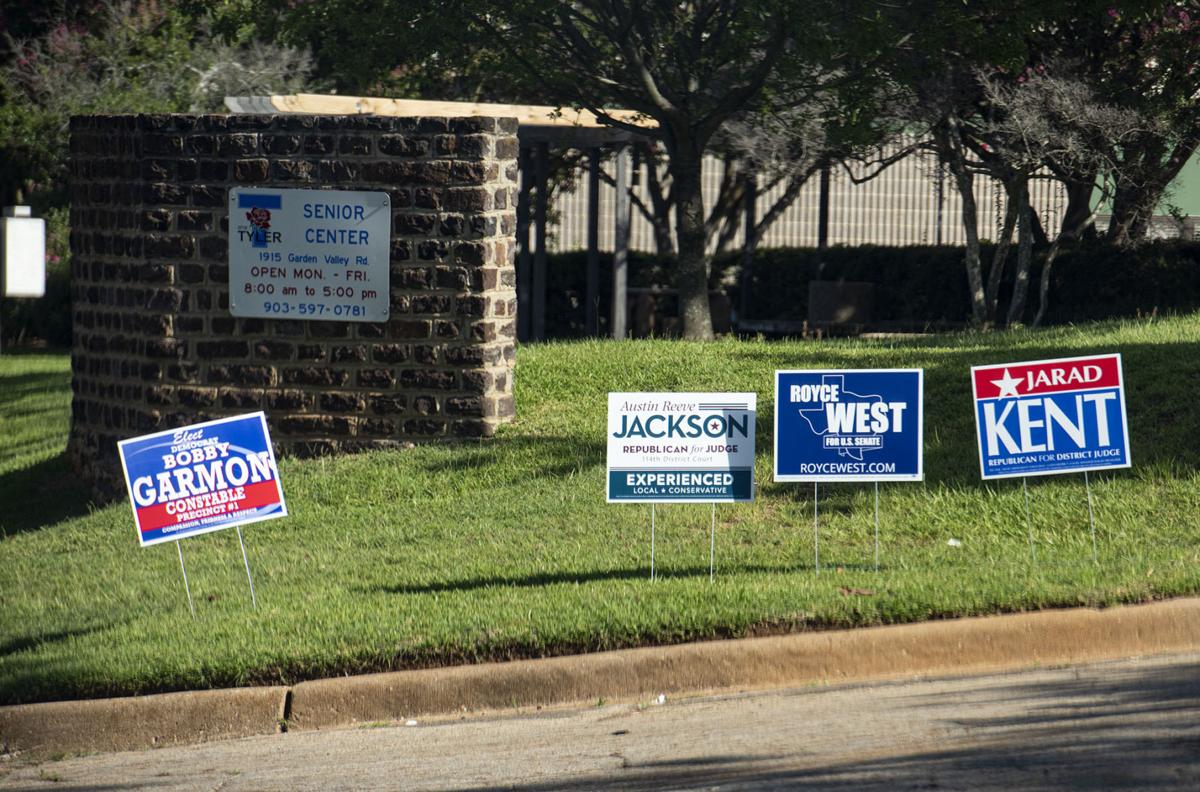 Election signs are posted outside of a voting location at the Tyler Senior Center in Tyler on Tuesday, July 14, 2020. 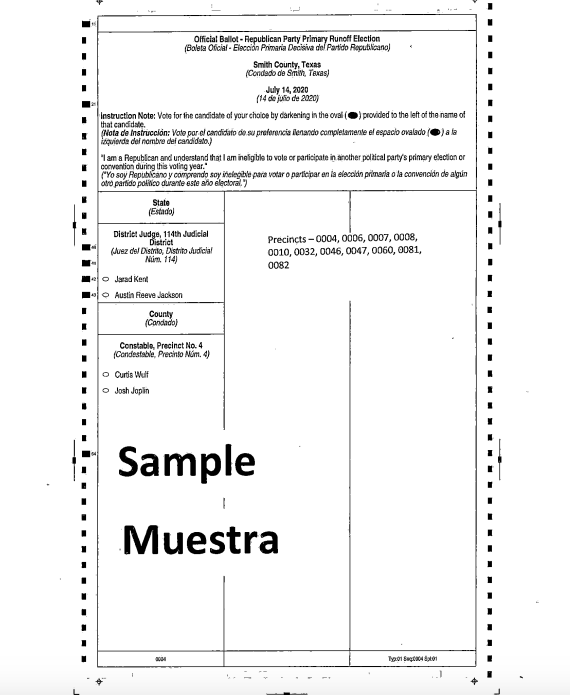 A sample ballot for republican races in Smith County is pictured. 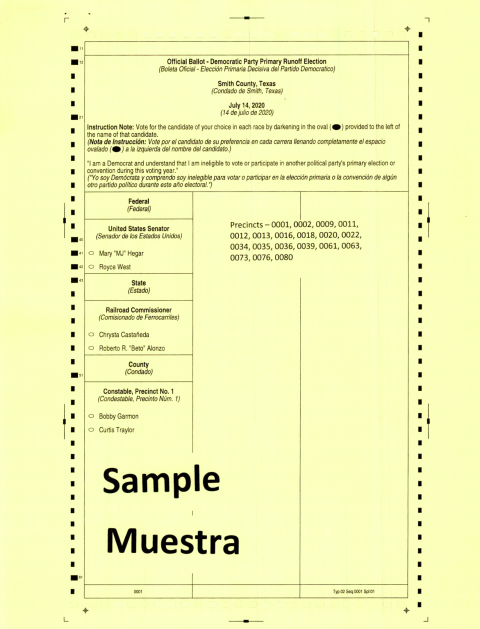 A sample ballot for democrat races in Smith County is pictured.

Election signs are posted outside of a voting location at the Tyler Senior Center in Tyler on Tuesday, July 14, 2020.

A sample ballot for republican races in Smith County is pictured.

A sample ballot for democrat races in Smith County is pictured.

Voters finally have a chance to decide runoff elections, nearly two months after initially planned due to the pandemic.

Turnout for early voting this year compared to 2016 is more than five times higher with 8,444 people voting in either Republican or Democratic runoffs this year, while 1,638 people voted in runoff races four years ago.

“The numbers are very strong for this runoff election in spite of the COVID-19 pandemic concerns,” Smith County Elections Administrator Karen Nelson said.

On Tuesday, voters will select winners for two constable positions, a district judge seat, party precinct chairs and state offices. In the 2016 runoff, the only local race was for the Republican nomination for the Smith County Precinct 4 Constable seat alongside some state positions.

Early voting numbers for this runoff show 5.95% of Smith County registered voters cast their ballot over a roughly two-week period. Election Day voting for the runoffs is Tuesday from 7 a.m. to 7 p.m. at 21 polling locations across Smith County.

Local races include Republican runoffs for Smith County Precinct 4 constable and the 114th District Court judge seat, while there will be a Democratic runoff for Precinct 1 constable. In these races, there are no challengers from the opposing party in November.

A total of 6,564 people placed their ballot in the Republican runoff between June 29 and July 10, while 1,880 people voted in the Democratic runoff. For this election, there are 141,890 people registered to vote in Smith County.

Regarding precautions for COVID-19, voters will follow social distancing guidelines while waiting in line and casting ballots and people will be given disposable swabs and gloves to use on voting machines. All voters are encouraged to wear face masks.

“The voters have been complimentary of the safety measures that we have in place,” Nelson said. “The high turnout in this election has shown us that we need to secure more than enough PPE and cleaning supplies for the General Election as soon as this runoff is over. Planning for more will be key in assuring that we have all of the safety supplies in place for the General Election.”

For statewide races, Democrats will vote in two runoffs to select the candidate who will face U.S. Senator John Cornyn, R-Texas, and their candidate for railroad commissioner.

Mary “MJ” Hegar and Royce West will face each other in the runoff as the two top finishers in the 12-person race. Chrysta Castenada and Roberto R. “Beto” Alonzo are vying for the Democratic nomination to face off against Republican primary winner James “Jim” Wright.

In the Democratic runoff race for Smith County Precinct 1 Constable, Bobby Garmon, who has served as appointed constable since 2017, is facing Curtis Traylor.

Traylor, a Tyler native, said he has roughly 13 years of experience in the criminal justice field, beginning with his time as a Texas Department of Criminal Justice corrections officer.

He has also worked in county detention at different sheriff’s offices, including Smith County under former Sheriff J.B. Smith.

Traylor wants to add a comprehensive internship for young people interested in law enforcement. He also wants to bring back the community policing program, but not based on contracts. The office would patrol and do security for public events, neighborhoods and school zones, he said.

The two are on the ballot after the 12th Court of Appeals ruled that Willie Mims, who received the most votes in the primary, could not be the party’s nominee.

Before the primary election, Garmon filed a lawsuit that alleged Mims did not meet filing requirements and thus could not be a candidate. While the lawsuit was being contested, Mims’ name remained on the ballot and he received the most votes.

The case eventually went to the 12th Court of Appeals, which ruled that a runoff between Garmon and Traylor must be held to decide the party’s nominee.

In the primary election, Garmon received 38% of the vote, while Traylor received 10%. There is no Republican challenger in November.

In the Smith County Precinct 4 Constable race, incumbent Josh Joplin will face challenger Curtis Wulf. In the March 3 primary, Joplin received 42.88% of the total, while Wulf took 29.67% in a four-person race.

Chapel Hill native Joplin, who is seeking a second term, said the office has responded to 1,973 calls and performed over 1,600 traffic stops and assisted in animal cruelty complaints since January 2017. He also worked at the Brownsboro Police Department as a K-9 handler and warrant officer.

Joplin said relationships with the Winona and Chapel Hill school districts have been built to protect all district campuses, including a Precinct 4 deputy at Winona Elementary with cost covered by Winona ISD. Two part-time deputies, a full-time night shift deputy and a deputy for Saturday patrol were added to the office as well. Law enforcement equipment was upgraded and Joplin took education courses to learn more about the constable position, he said.

Joplin was endorsed by the Tyler Organization of Men.

Wulf, who calls himself a lifelong Republican, conservative and Christian, is an investigator at his wife’s firm, the Wulf Law Firm. He was previously a law enforcement officer at Angleton, West Columbia and Needville police departments.

He said he’s been a licensed peace officer for over 15 years with experience that includes being a patrol officer, drug interdiction, patrol supervisor, and felony investigator. He also holds an intermediate peace officer license and is a certified instructor through the Texas Commission on Law Enforcement and a field training officer.

He graduated from the command staff leadership series from the Bill Blackwood Law Enforcement Management Institute of Texas, and he’s owned a private investigation and process service company, which has included working for large insurance companies. He wants to take a pro-active approach to the position and community involvement.

He has been endorsed by Grassroots America — We The People and The East Texas Regional Fraternal Order of Police.

There will be no Democratic candidate in this race in November.

Kent is a partner at the Chamblee Ryan law firm. He has spent much of his career practicing civil law. He has been praised by retired Smith County District Attorney Matt Bingham and retired Sheriff J.B. Smith.

He said it would be an honor to serve in the same court his mother presided over for 20 years.

Kent has been endorsed by former Tyler mayor and state Sen. Kevin Eltife and Texans for Life’s Life PAC.

Jackson is the owner of Jackson Law Firm and practices criminal, regulatory and appellate law. He was previously a prosecutor in Gregg County, serving as the county’s Chief Appellate Attorney. In addition to his law degree, he also is attending Fuller Evangelical Seminary.

He is a past precinct chair for the Smith County Republican Party and sits on boards for Historic Tyler and the Hispanic Business Alliance.

He hopes to ensure that Smith County’s three courts that handle criminal cases have experienced judges on the bench, with the retirement of Kennedy and eventual retirement of longtime 241st District Court Judge Jack Skeen.

He has been endorsed by state Rep. Matt Schaefer, Grassroots America- We the People and Texas Right to Life.

The winner of this runoff will not have a Democratic competitor in November.