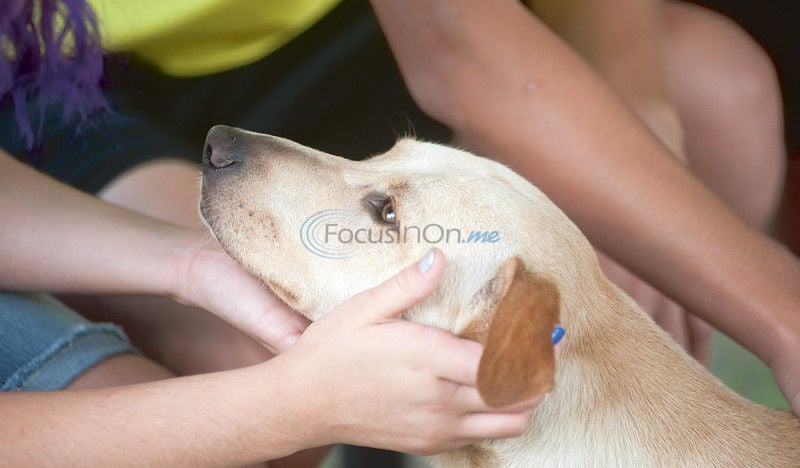 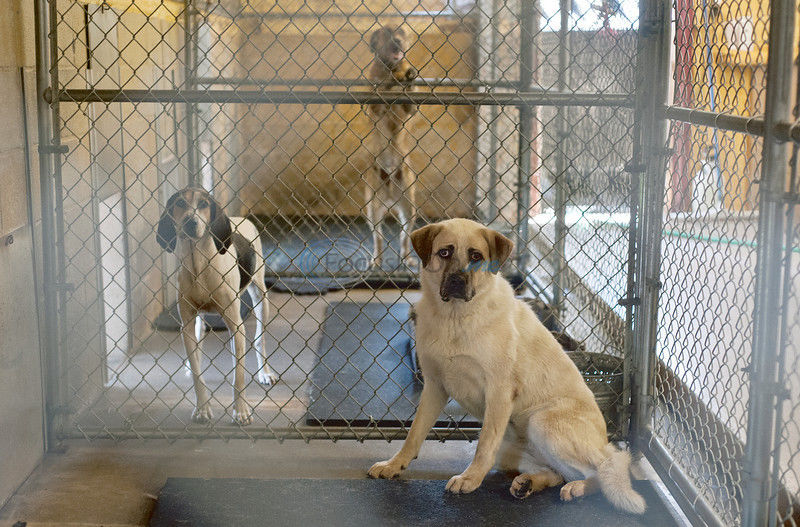 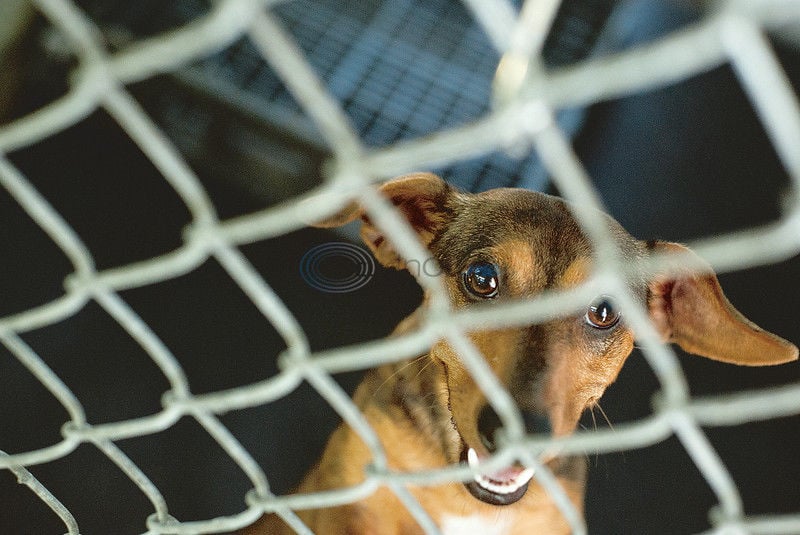 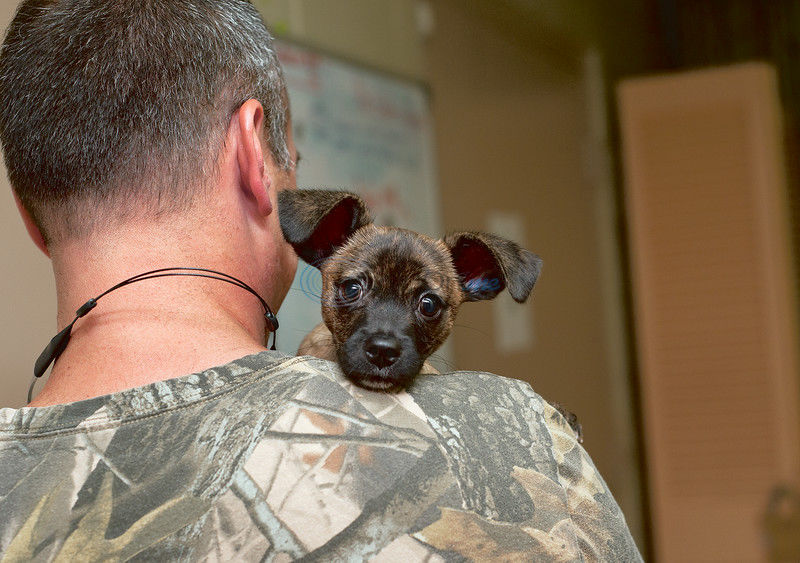 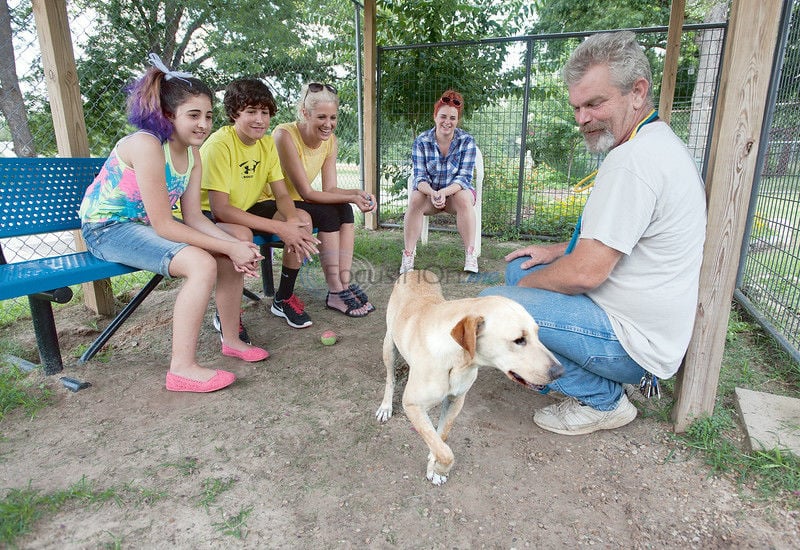 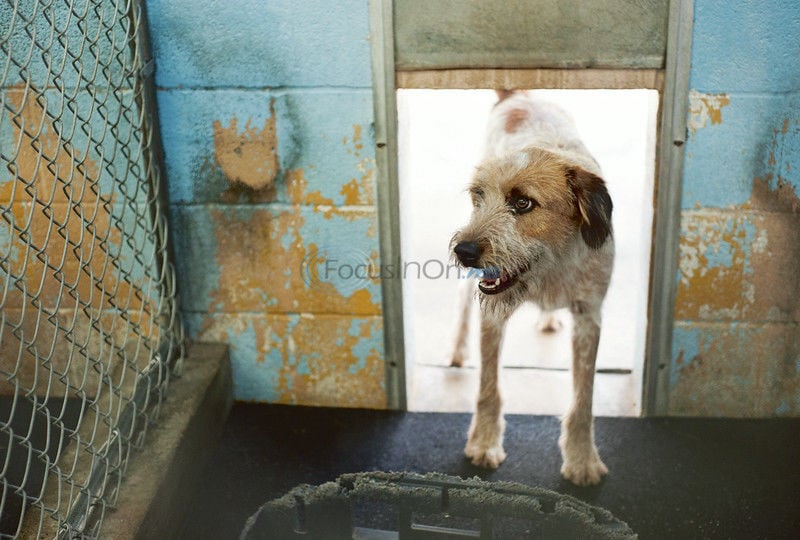 As Gayle Helms, executive director at Pets Fur People, walks down the central hallway, with a dozen kennels on each side, she stops to pat every one of the 24 dogs on the head.

She squats on the concrete floor, puts her fingers through the wire netting and scratches the dogs' ears with a big smile on her face, talking to each by name. Each dog has its own spacious room, with a doggy door to its own fenced outdoor area.

"This is Paige," she said, petting a medium-sized terrier mix with light brown fur. "She came in with another dog, and they had seven puppies with them. It was as if they were saying, ‘We know you can help us, so can you give us a hand here?'"

She moves over to a small beagle mix, who has brown fur with white patches.

"This is Sampson, and there's Delilah," she said. "We found both of them as strays and got them adopted out, but their owner had a lifestyle change, so we got them back."

Every one of the 38 dogs and 17 cats at Pets Fur People has a story and is waiting for a happy ending. The shelter's goal is to provide a temporary home for pets before they are adopted. Pets Fur People is a selective-admission, no-kill animal shelter dedicated to spaying/neutering as alternatives to euthanasia dog and cat population control.

"All of our animals, dogs and cats, are tested for the major diseases, given their vaccinations, spayed or neutered and micro chipped," Ms. Helms said. "It acts as a sort of proof of I.D. That way, if they get lost and someone finds them, they take them to the animal control office, who can scan for the chip and let us know that they have one of ours."

Pets Fur People has a large facility on the edge of Tyler, with several buildings.

"Our first kennel has small to medium dogs," Ms. Helms continues. "The second is for bigger dogs, and the third is for puppies. We have several outdoor, enclosed ‘get acquainted' areas for families to be with dogs they might want to adopt. They can be with them, and see if they're the right dog for them, or they can bring a dog they already have and see if they get along. We have several outdoor kennels for dogs that need more space. We're actually about to construct a new facility soon. In two weeks, Lowe's will give us the labor and materials for a new building."

About 66 percent of Pets Fur People's adoptions are dogs, but they also adopt a good number of cats.

"This is our cattery," Ms. Helms said as she enters a large room with green paint on the walls.

There are several cat toys on the floors, where at least a dozen small kittens of every color play with each other, mewing happily. On beds and shelves above, older cats either sleep, or gaze on indifferently. A door leads to a closed porch, which the heat causes all of the cats to ignore.

"It's probably more like kitty day care. We don't keep them in cages or anything like that. There are no strays or unhealthy cats."

Outside of the cattery, the shelves are lined with pet toys, leashes, collars, bowls, treats and bags of food, on sale for "a nominal fee." Most of Pets Fur Peoples' equipment is donated by Wal-Mart and major local pet stores, says Ms. Helms said.

Outside is a memorial garden, with four pathways of flagstones leading into a central courtyard, with benches all around. The paths are lined with bushes, flowers, and small trees.

In addition to volunteers, which are always welcome, Pets Fur People has a small paid, full-time staff responsible for feeding and caring for the animals.

"We feed all on the dogs at 7:30 in the morning, and the puppies in the afternoon as well," Ms. Helms said. "We're fortunate Wal-Mart donates broken bags of dog food, and so does Sam's. People sometimes try to donate food to us, and we appreciate what they're trying to do, but we try to keep all of our dogs and cats on very steady diets of the same nutritious food or it upsets their stomachs, sort of like it does to people."

It's this sort of care and concern for the pets in their care that brings people back to Pets Fur People over and over again.

"I first came here several years ago, and got a dog, which I had for four years after I saw her on Pet of the Week," says Melissa Wedgeworth. "Then we came back and got another. The first was a miniature Doberman, and the second was a small terrier. I like Pets Fur People because it's no-kill, it's always clean, and the people are friendly. We're actually just browsing now. We always come here when my grandson Tyler is with us."

The adoption process can seem intimidating, but the staff is always willing and able to help, leading to Pets Fur People's 98 percent adoption rate. Out of 37 animals brought in during June, 36 have been adopted.

"First, we'd find out what kind of dog you're interested in. Do you like big dogs or small ones, inside or outside, that sort of thing," James Montgomery said, a long-time employee of Pets Fur People. "We'll find you a dog you like, bring him out, and see if you get along. If you have a dog already, you can bring him now. We'll know within 5 minutes if you won't get along. Then, you'll fill the adoption form out."

The form asks for address and contact information, employment status, living situation, family size, whether you have pets already, their health, etc.

"We'll ask if you have a yard," Montgomery said. "If you say you do, we'll check it out on Google Earth, just to make sure. We'll talk to your veterinarian, and once that is all taken care of, pay $130, which includes the cost of insurance, vaccinations, neutering, microchips and everything, and then we're done. If you get home and it just doesn't work out for some reason, you must bring it back to Pets Fur People, not elsewhere, no matter when, even if it's four or five years down the line. That way, we know the dog will be well taken care of. Otherwise, we'll have to put you on a ‘Do Not Adopt' list."

There are good reasons to return a pet, he said, such as a move, but not just being tired of the work a pet takes.

"It doesn't matter if you're the president of the United States, or the governor of Texas," he said. "If you can't take care of a pet, we won't adopt one to you. It's the pets that matter most to us, not money."

Just as this love for animals keeps customers coming back, it also keeps employees happy in what they do.

"I didn't know for sure what I wanted to do when I came here, so I just applied for a job, and thought it would be something to do until something better came along, with better pay and benefits," Montgomery said, with a smile, "But it's been two years now. What boy wouldn't like a job like this? Everyone loves it here."

From its start in 1963 as a branch of the East Texas Humane Society to today, from first receiving an animal to the final adoption, Pets Fur People is all about sheltering animals until they can find a permanent home with a family who will love them.

"It's kind of more like an orphanage," Ms. Helms said. "All of them have their own little personalities. It really is a sanctuary, and we're proud of what we do."