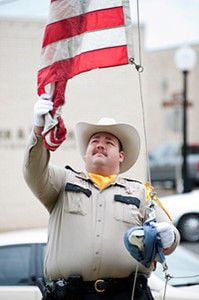 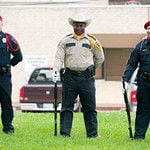 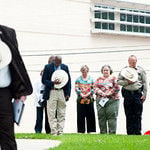 HENDERSON – Rusk County's law enforcement community came together Wednesday to honor their own and remember officers who have died.

Various local law enforcement agencies were on-hand for the occasion, which included the national anthem, performed by Henderson Middle School students, a riderless horse, "Amazing Grace" on bagpipes and the playing of taps.

During the invocation, Hillview Baptist Church Pastor Randy Sceroler prayed that God would protect officers as they carry out their duties.

Rusk County Judge Joel Hale then told attendees that they were there to thank agencies for the work they do.

Rusk County District Attorney Micheal Jimerson echoed Hale, saying, "We want to celebrate all law enforcement today and sacrifices they've made and those who lost lives in the line of duty." Jimerson also read a peace officer's prayer.

Gregg County Sheriff Maxey Cerliano, who served as the speaker, noted stories of fallen officers, including Dallas Police Officer J.D. Tippit, who was killed in 1963 by Lee Harvey Oswald, and Rusk County Precinct 3 Constable Elbert Grigsby, who was killed while on duty.

According to the Officer Down Memorial Page, Grigsby, who had served for nine months, was shot in the 1930s when he went to question someone about a crime.

He said some officer deaths come from firearm fatalities as well as traffic-related incidents.

But behind them all, he said, is "a story of sacrifice."

"Remember those who have gone before us. … To serve justice, they die unjustly," Cerliano said.

Renee Shorter, assistant court coordinator in Rusk County, said she believes the ceremony was a good opportunity to honor law enforcement and their service.

"When you work in the court system, you learn how much they sacrifice to be in law enforcement," she said.

Henderson Police Department Deputy Chief James Pierson said he's seen some officers who've died while in law enforcement, so for him, the ceremony is "a chance to honor and remember some of the friends."

Jimerson said he's proud of the event, which is in its ninth year.

He said it's an opportunity to celebrate sacrifice but also to "rededicate ourselves to service."

Kishla Salazar, executive director of the Rusk-Panola Children's Advocacy Center, said she believes it's important to show respect for law enforcement and commemorate any day set aside to memorialize officers.

Jannie Lamb, child and family advocate with the advocacy center, said she's impressed at the cooperation between agencies and noted that everything that comes to the center is from law enforcement or Child Protective Services.

"I think it's great …" she said of the National Peace Officers Memorial Day. "They work hard, and they're on call … and sometimes go way beyond. I think it's really great to honor them."