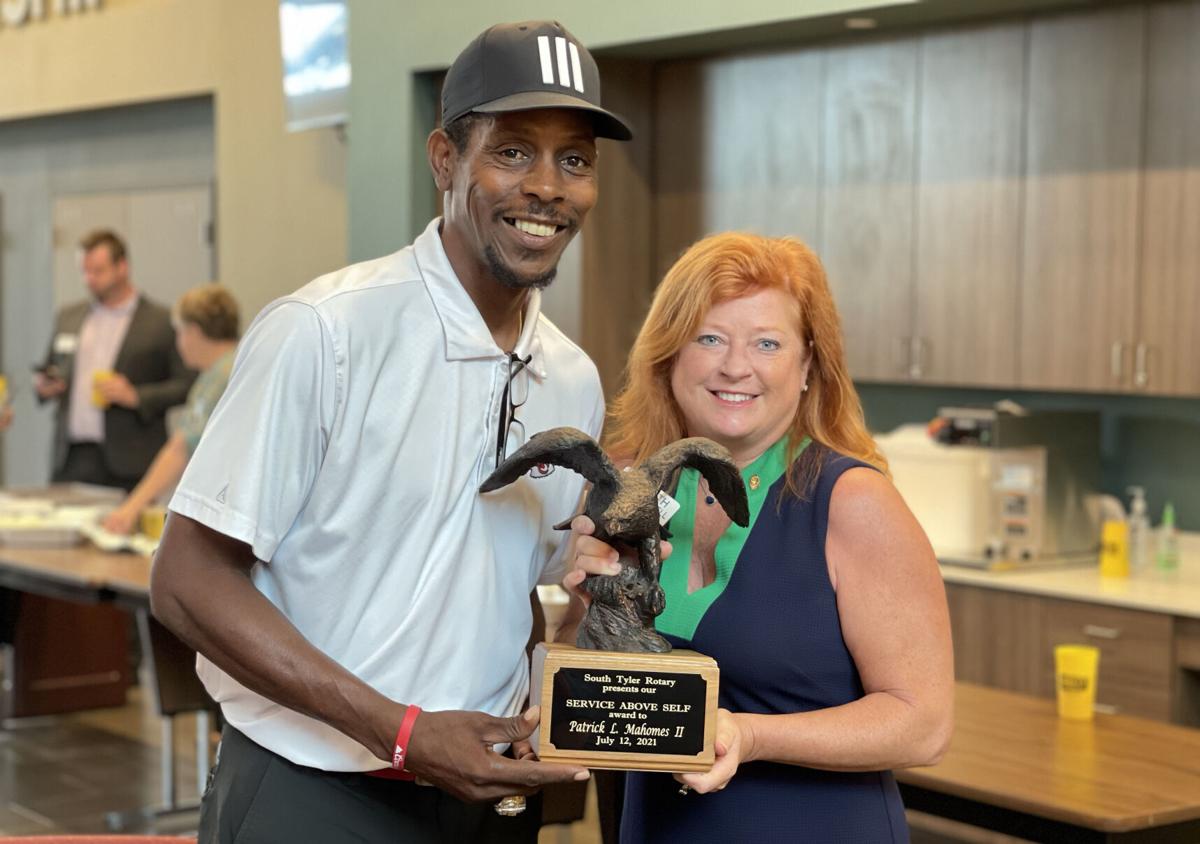 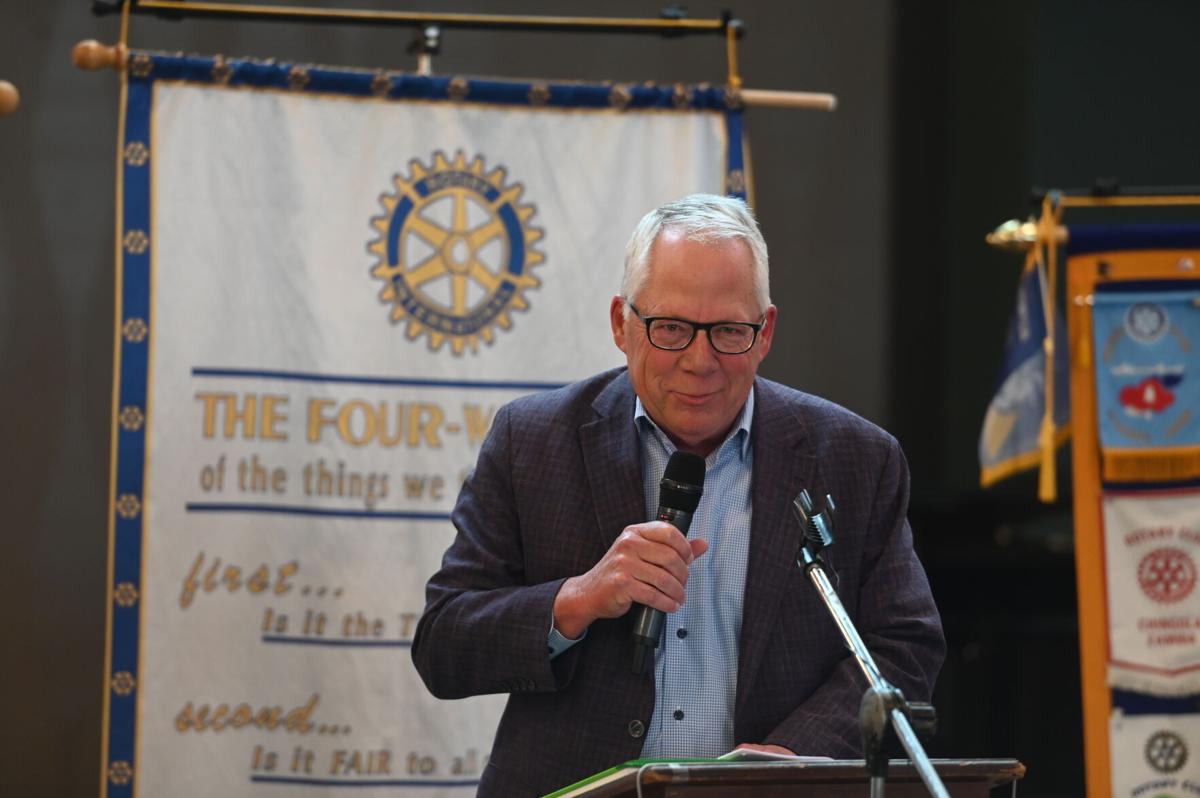 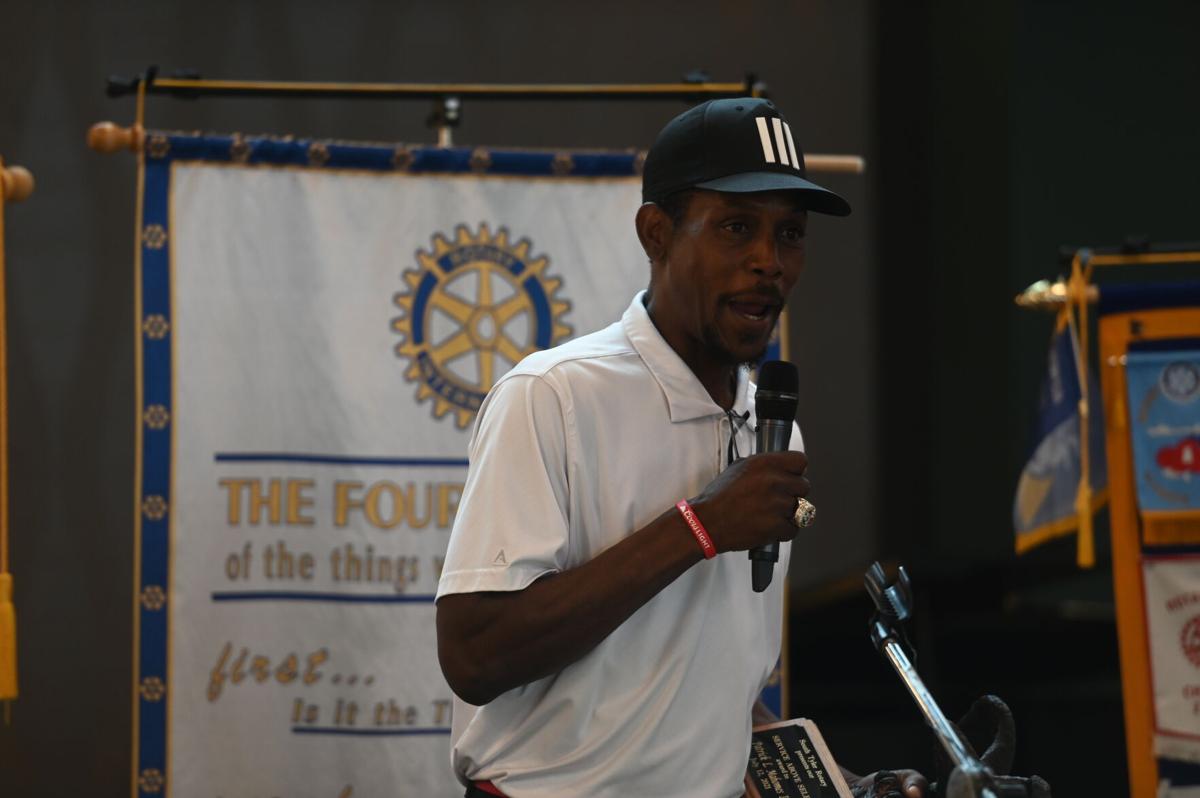 Pat Mahomes accepts honors from the Rotary Club of South Tyler and Tyler Mayor Don Warren on behalf of his son, Patrick Mahomes, on Monday afternoon at the club’s meeting. 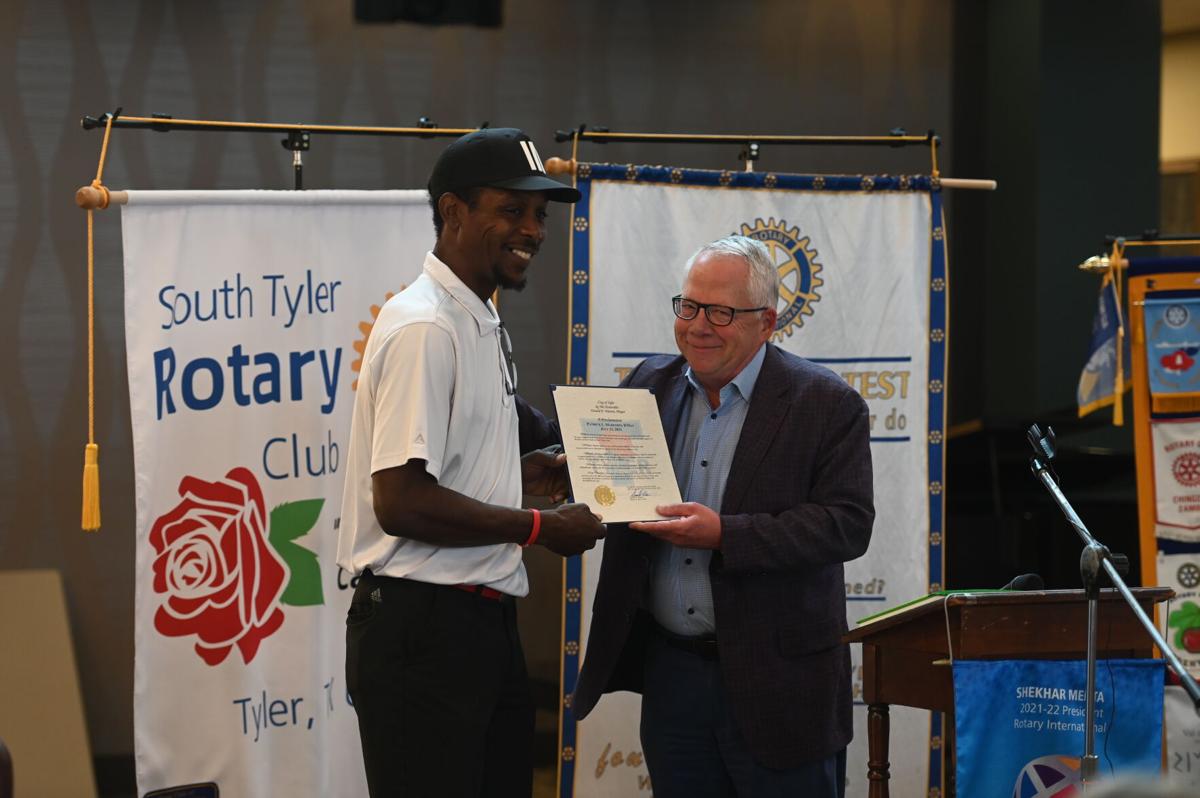 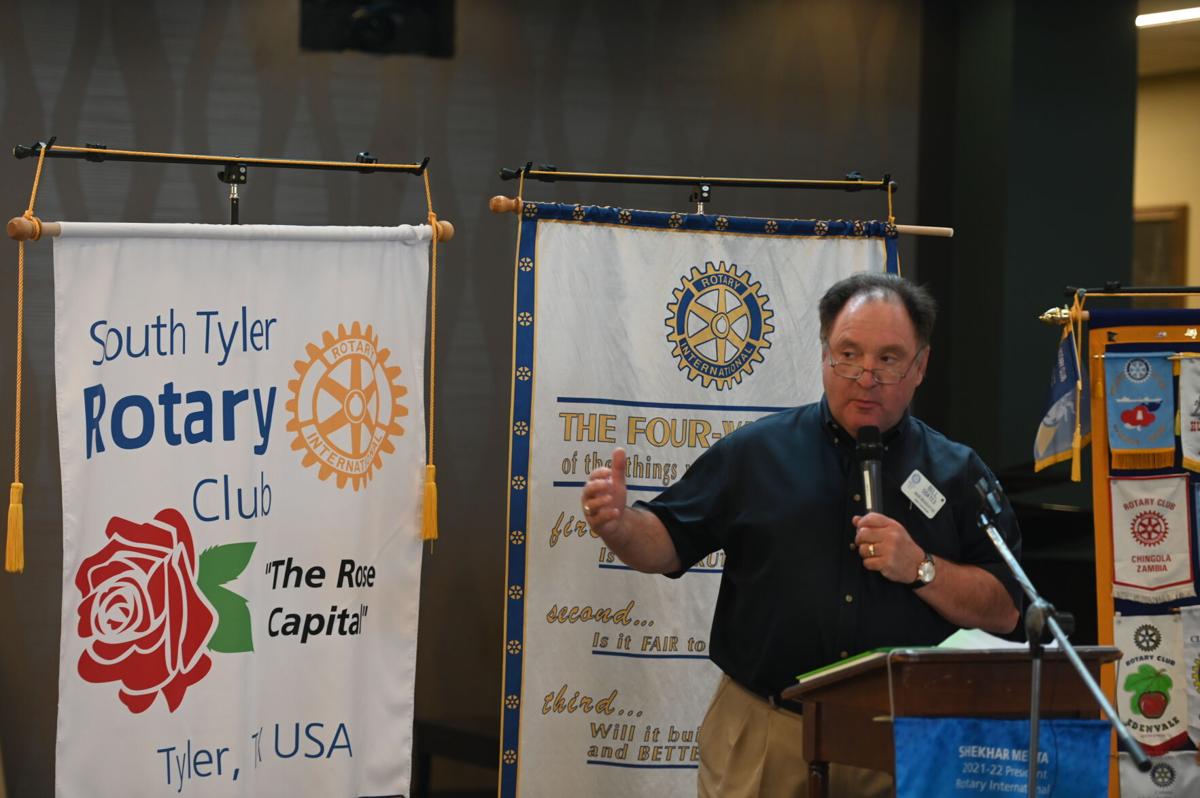 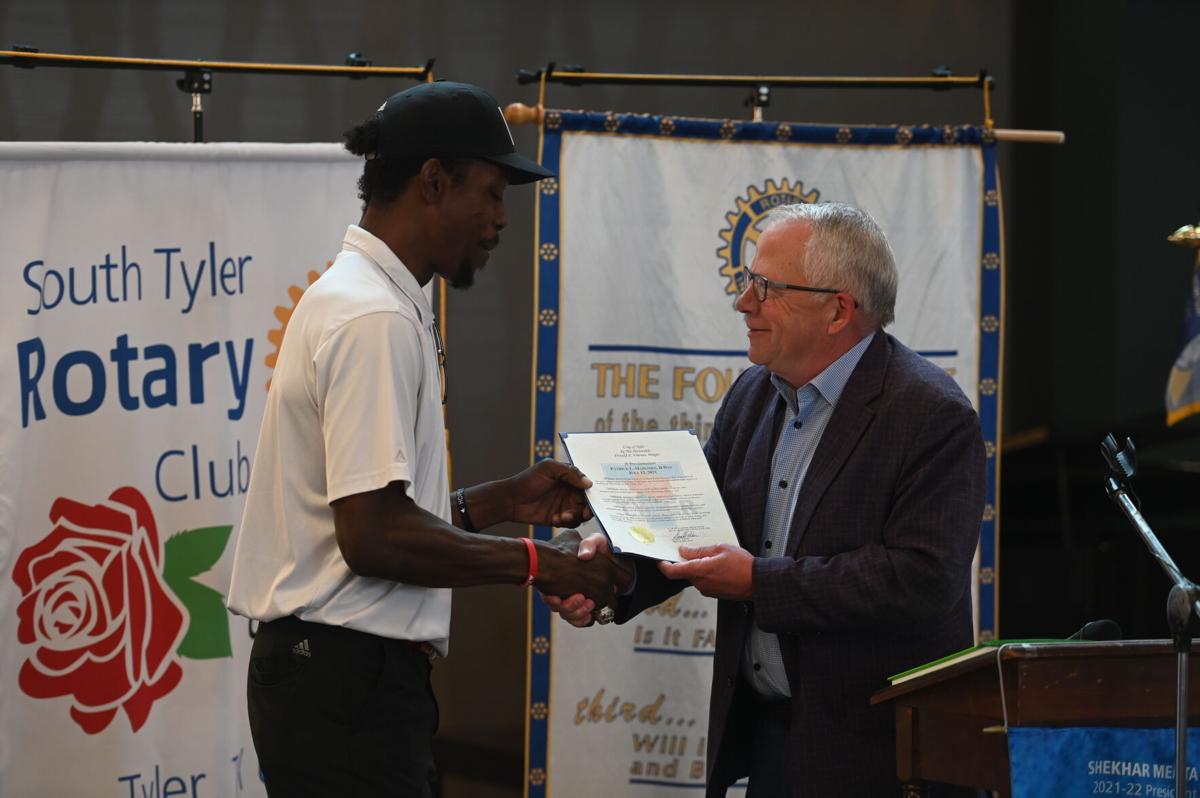 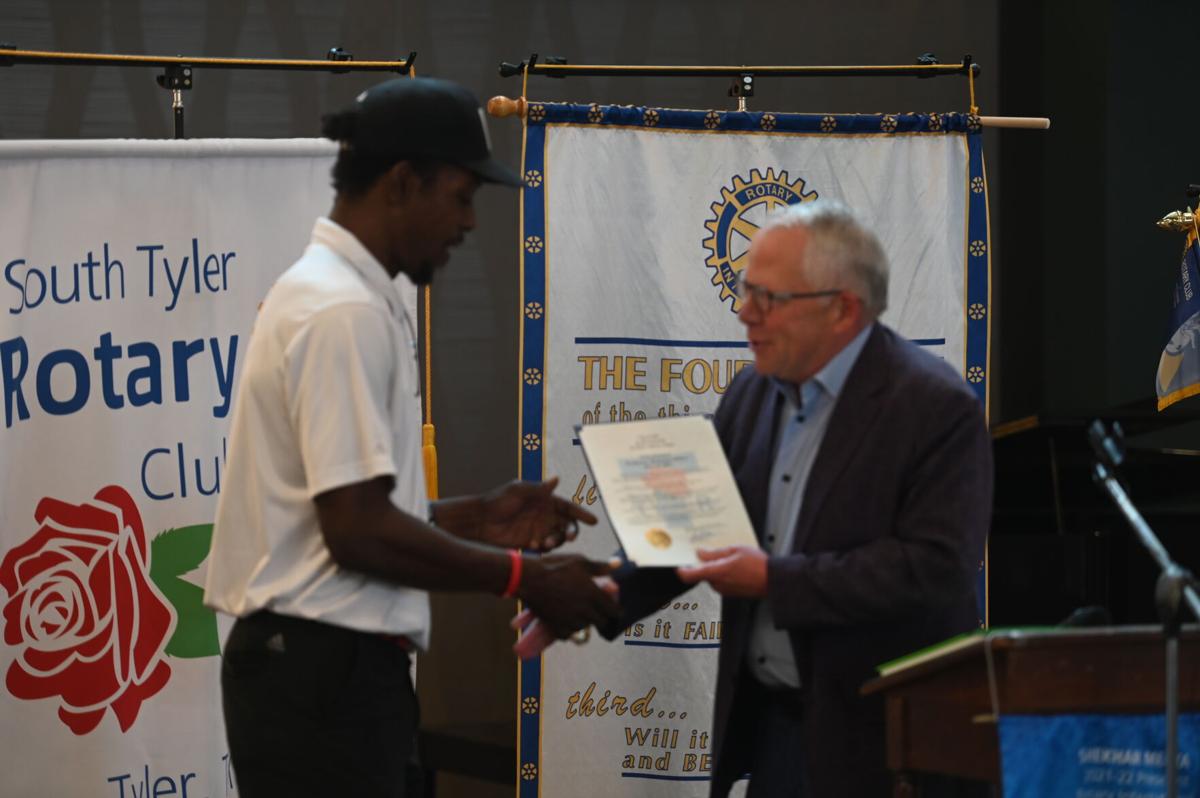 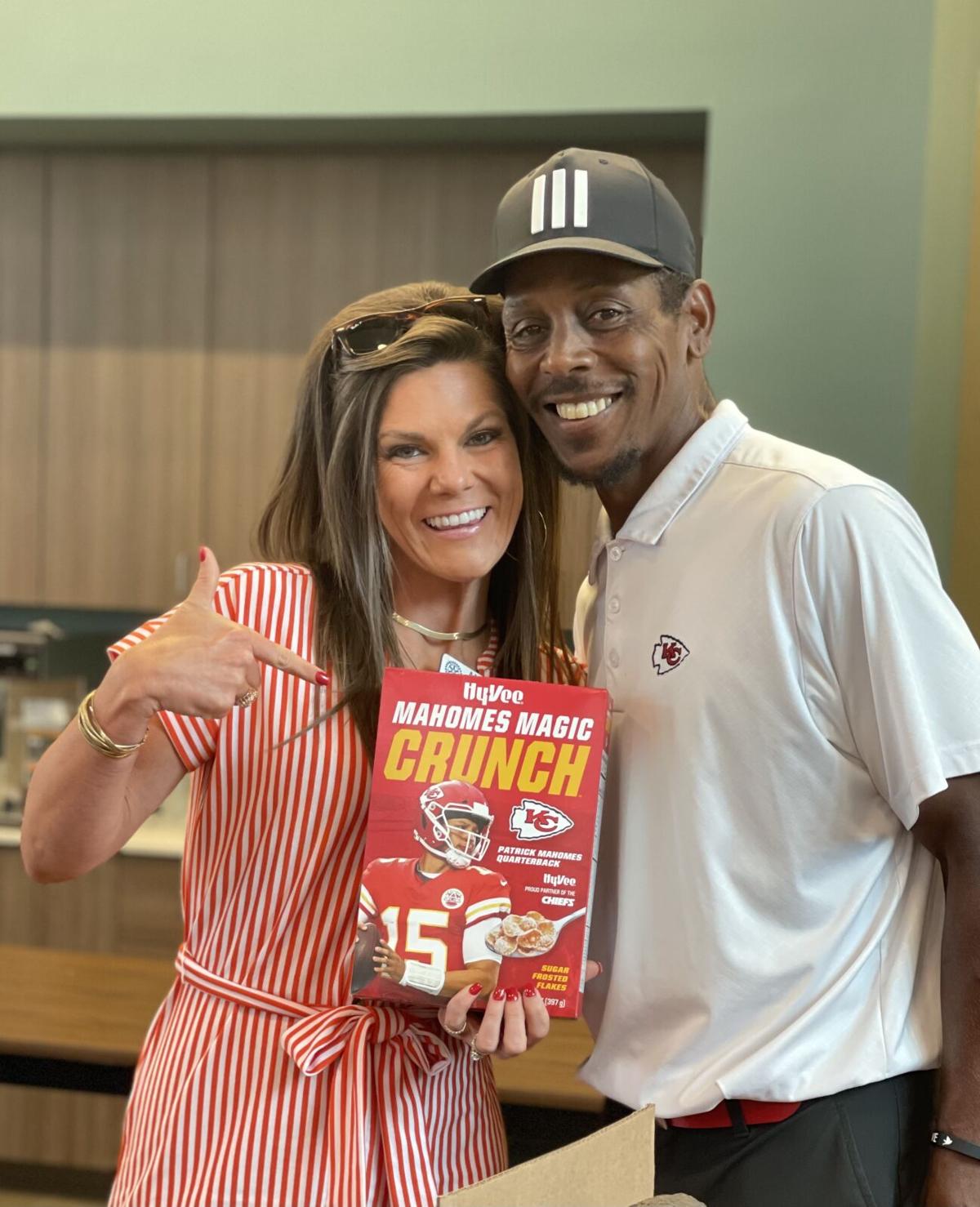 Pat Mahomes accepts honors from the Rotary Club of South Tyler and Tyler Mayor Don Warren on behalf of his son, Patrick Mahomes, on Monday afternoon at the club’s meeting.

Whitehouse native and Kansas City Chiefs quarterback Patrick Mahomes is a superstar on the football field, but he’s also known for his humble personality and giving back to East Texas.

On Monday afternoon, the South Tyler Rotary Club honored his service and compassion by making Patrick Mahomes an honorary member of the club. The club also gave him the Service Above Self Award and the Paul Harris Fellow recognition at the club’s regular meeting.

“I think we have a super responsibility to celebrate those who do it right,” said South Tyler Rotary Club President Beth Blaisdell. “Today, we’re going to be celebrating Patrick Mahomes. We all know Patrick’s story of professional success, but Patrick also does an incredible amount of good for his community in East Texas, Kansas City and continuing to spread.”

Patrick Mahomes’ father, Pat Mahomes, accepted the honors on behalf of his son and stood by Warren as he read the proclamation.

Warren noted Patrick Mahomes’ support of the East Texas Food Bank and the Mentoring Alliance through his 15 and the Mahomies Foundation.

The nonprofit’s mission is to improve the lives of children by supporting initiatives focused on health, wellness, communities in need of resources and other charitable causes. Patrick Mahomes established the foundation in 2019.

Pat Mahomes thanked Warren and the South Tyler Rotary Club for honoring his son, who was unable to attend the meeting.

“I talked to him this morning, and he wanted to say thank you to everybody. 15 and the Mahomies Foundation is doing a lot of things,” Pat Mahomes said. “He’s very focused on helping the communities that he lives in. Of course, he’s got Kansas City, Whitehouse and also in Lubbock.”

Pat Mahomes said the foundation is moving in the right direction, and he let the meeting attendees know his son appreciated the support from East Texas.

“They’re (15 and the Mahomies) doing a lot of great things. I think they’re headed in the right direction,” the older Mahomes said. “There’s not anywhere that he goes around here that he doesn’t see his jersey and stuff like that. He’s my son, and he’s always been a humble kid. He knows Whitehouse is his home.”

“We have seen a lot of great athletes come through Christus Trinity Mother Frances Rose Stadium, and in my time four have stood up head and shoulders that were just special,” Coates said. “And Patrick Mahomes was one of those guys that you could tell was just kind of different. God gave him a lightning bolt for a right arm.”

Coates said it’s one thing to be gifted with that ability, but it’s another thing to use those skills. He also recalled interviewing the Super Bowl MVP in high school and at Big 12 media day.

He noted how Patrick Mahomes once showed up at Howard Payne University to support his friend at a football game.

“His love for his community and the people he grew up with .... this young man has never forgotten where he came from,” Coates said. “He’s always been very humble. It’s one thing to be a superstar and that you’re humble at the same time. It doesn’t get much better than that.”