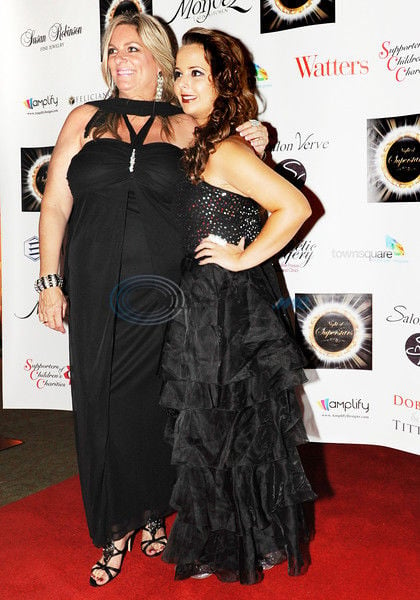 Amy Fish and Taylor Heard pose for a photo on the red carpet at the Superstars Gala at the Cascades of Tyler Saturday evening. Herb Nygren Jr/Staff 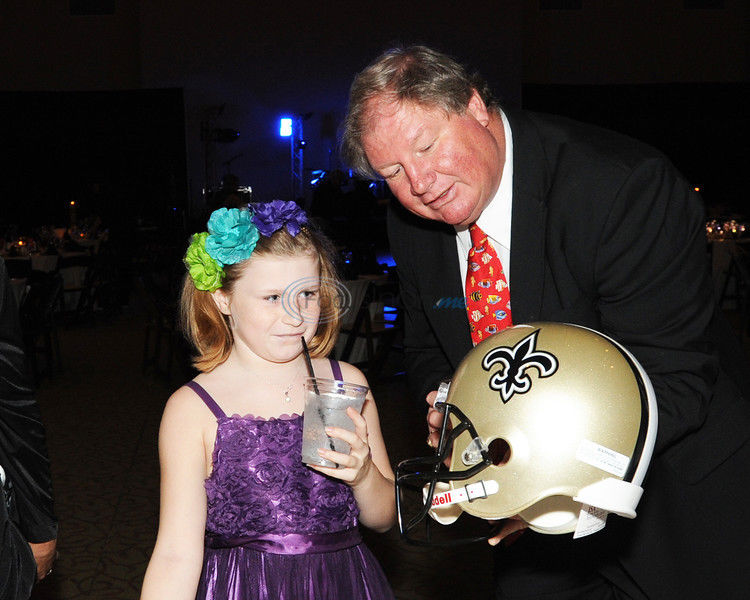 Amy Fish and Taylor Heard pose for a photo on the red carpet at the Superstars Gala at the Cascades of Tyler Saturday evening. Herb Nygren Jr/Staff

Fifteen disabled children who have made inspiring achievements were treated like celebrities during Tyler's first "Night of Superstars" event on Saturday at The Cascades, which was formatted like the "Night at the Oscars" ceremony.

Recommended by local hospitals and nonprofit organizations that serve people with disabilities, the children with varying types of disabling conditions were escorted down a formal red carpet to be recognized for overcoming their adversities.

As they moved along the red carpet, guests in the crowd cheered just as crowds cheer celebrities arriving for the Oscars. An award was presented to each child.

"The event is to honor these kids who are affected by different types of disabling conditions, but are reaching far beyond that and are excelling in areas such as academics, athletics, the arts and community service," Greg Johnson said.

"It's to lift them up and to recognize them for all that they are doing and to thank them for the inspiration they are to us."

Johnson is CEO/founder of Ragan's Hope, a nonprofit agency based in Dallas that hosts Night of Superstars.

Rebecca Mercer, who operates a therapeutic horseback riding facility and nominated two students, said the Superstars recognition is "a very nice idea" to honor individuals no matter what their disability who are rarely celebrated for their accomplishments.

Sal Landeros, of Tyler, said he was glad for the children to walk down the red carpet and feel good for one evening.

Amanda Praytor, of Forney, said her family "loved" the event.

"I think it's a great idea to show their (special children's) achievements more than focusing on the hardships they've been through," she said.

Net proceeds from the event are designated for the Tyler superstars and goes into a Superstars college scholarship fund and Superstars family support program, Johnson said.

The children received awards for excelling and distinguishing themselves and for their achievements.

Before the Saturday night ceremony and dinner, the children were pampered during the day with visits to a salon for their hair and makeup and were dressed in formal attire.

The festivities started with a cocktail reception, followed by the red carpet production, the dinner awards ceremony and a party.

The crowd, estimated at about 400 people, paid up to $125 per person for tickets to the charity event.

Night of Superstars was founded in 2005 in Dallas and now is expanding. Besides East Texas, it is now held in Los Angeles, San Diego, Nashville, Houston, Austin and other places.

Children honored at the Tyler event were:

Elizabeth Armstrong was born with albinism.

"She's extremely bright with a sweet and caring spirit. However, due to her appearance, she has had to endure a great deal of bullying and mistreatment in school. Instead of being angry and turning away from these students, she chose to speak to classes to explain her condition," her biography states.

"Instead of focusing on the negative … she chooses to face her adversities (and adversaries) with not only courage, but love, which has resulted in her being a light in the darkness. Choosing this path has not only been a blessing to her but to countless others."

"She has a heart of servitude. She donates her toys, clothing she's outgrown and school supplies she doesn't need to single parents. She volunteers at many functions and sometimes is the only child there. When she hears of someone being sick, she bakes homemade bread for them and delivers it with a piece of art and a prayer," her biography states.

She is a gifted artist. She also schedules yearly Christmas caroling and the passing out of candy canes at local nursing homes. She also initiated a donation of 100 pairs of socks to nursing home residents. She packed small lunches for underprivileged kids at her weekly youth Bible study.

Trent Browning has Down syndrome, autism and multiple heart defects.

He has learned to communicate through sign language and his iPod. He loves therapeutic riding and can guide the horse with the reins or a kick of his heel. He is very involved in the community and volunteers with the Special Needs Ministry, Special Blessings at First Baptist Church in Whitehouse, his biography states.

He participates in several camps during the summer, surpassing expectations by proving he can do things like swimming, canoeing, zip-lining and fishing.

Selena Bustos was born with retinopathy of prematurity, which resulted in blindness.

Even though she wears prosthesis in both eyes, she navigates around John Tyler High School as well as any sighted student, her biography states. She knows all the principals and many of the teachers by the sound of their voices. She is on the A/B honor roll. She won first place in a statewide social skills video contest sponsored by Texas School for the Blind and Visually Impaired.

Maci Drewry is a gymnast and involved in both hip-hop and cheer teams. She loves acting and will be attending a children's acting camp in Los Angeles. She also loves the outdoors and riding horses, her biography states.

She is an ambassador for the Cystic Fibrosis Foundation, advocating and spreading awareness. She has raised more than $150,000 locally in two years.

He is an outstanding culinary arts student and was chosen to compete last year in the Hospitality Educators Association of Texas contest. He is one of the most talented and hardest working students in his culinary teacher's class, his biography states.

He is on the A/B honor roll. All who know him say it's his character that makes him stand out although he says it's his faith in God that keeps him well adjusted.

Alexis Green had brain surgery when she was 1, which caused her to be developmentally delayed.

She has worked hard to achieve what she has learned, with her latest challenges being learning how to use an iPod and computer, her biography states. Her passions are trains and music and she has taught herself how to use the keyboard to produce music.

Jim Reynolds has been in a wheelchair most of his life.

He is responsible for all his self-care needs, has a positive outlook and is very determined in everything does, his biography states. He attends Tyler Junior College. When he went to Robert E. Lee High School, he was active in school activities including the basketball team. He was named king at last year's homecoming ceremony.

When he was younger, he was a goalie on a hockey team.

Abby Jo Roberts was born without her right hand.

She enjoys playing volleyball and soccer but suffered a broken wrist and has to allow others to do some things for her, her biography states. She is a cheerleader and was helped by her occupational therapist who made her pompoms adaptable for her.

She is a straight "A" student with all "E" in conduct. She was recently commended on her state testing scores.

Krystalin Simoneaux was diagnosed with congenital tricuspid atresia and stenosis.

She has had four open-heart procedures, seven heart catheterizations and two stints placed.

She is on the A/B honor roll and loves to dance and perform at school but horseback riding is her greatest passion, her biography states. Between her third and fourth open-heart procedures, she lost her speech. Since then she has been riding at Spirit of St. Louis to help her regain her speech and improve her balance and trunk strength.

She is almost independent in her riding and won two gold medals in trail and English equitation at her first Special Olympics event last spring.

He helps his mom create displays, set up and sell items at craft fairs. He is very caring and loves helping others, his biography states. One of his most incredible acts of kindness was a 5K run for the daughter of a friend of his mother's who had recently passed away.

He told everyone he met about his story as he walked and by the time he reached the finish line, there were 75 people with him.

Mitchell Smith has been diagnosed with cerebral palsy and Duchene Muscular dystrophy and developed diabetes this year.

He excels at learning and is currently homeschooled in the third grade. He joined Cub Scouts before first grade and has received numerous awards and merits, his biography states.

He volunteers as a tour docent at the London Museum and tearoom in New London. He is an avid picker. One of his favorite activities is going to junk stores and sales and he loves to look for bargains.

Erica Thomas has been visually impaired since birth.

She is participating for the second year in UIL Choir. Last year she received a "1" rating in solo and ensemble choir, her biography states. She also is a member of the All-Region Choir at her middle school. She maintains a 3.0 grade point average.

She is known by her peers and teachers as extremely upbeat and positive.

She has earned a spot in a mainstream fifth-grade class, her biography states. She is currently learning how to use JAWS software at The Lighthouse for the Blind and uses an iPod with a refresher brailler. She can use a Qwerty keyboard to type and is efficient with Perkins and Mountbatten braillers.

She loves music and excels in anything she learns through songs and rhymes.

Ariel Wilson has a form of muscular dystrophy called CMT.

She has an incredibly positive attitude and has many accomplishments including being a member of the National Honor Society with all "A's," her biography states.

As an ambassador for her school, she volunteers to help with many different activities and helps with a fundraiser for the Muscular dystrophy Association every year. She plans to work in the medical field as a therapist and loves to sing. She has won many awards in singing competitions at school and sings at her church.