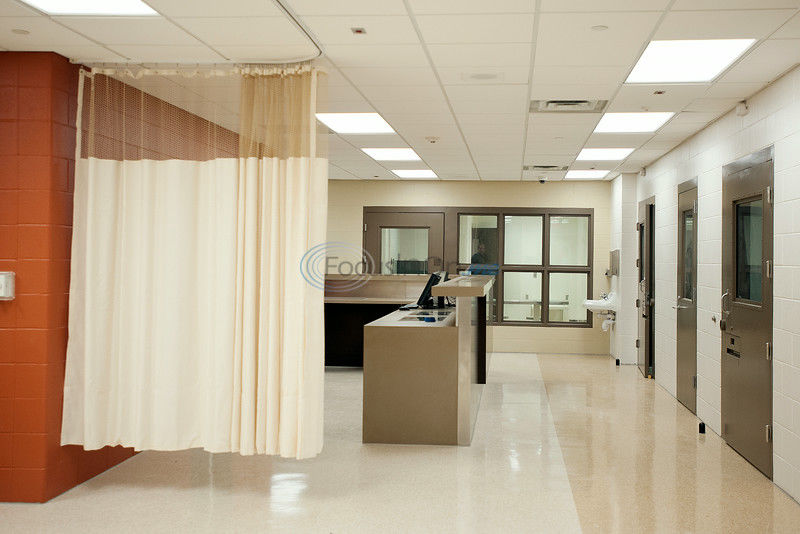 photo by Sarah A. Miller/Tyler Morning Telegraph A new addition to the downtown Tyler jail will be the infirmary for basic medial care, pictured here Monday Aug. 18, 2014. The jail renovations are set to be complete by November. 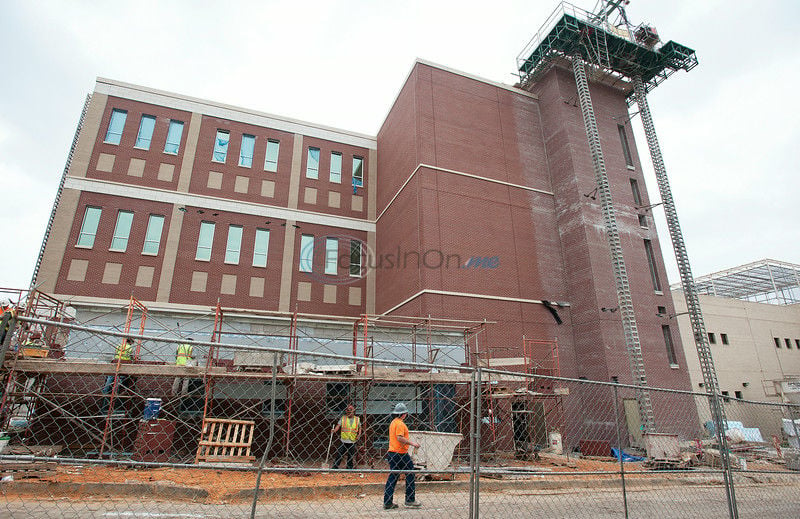 photo by Sarah A. Miller/Tyler Morning Telegraph Constructions continues Monday Aug. 18, 2014 at the downtown Tyler jail. The jail renovations are set to be complete by November. 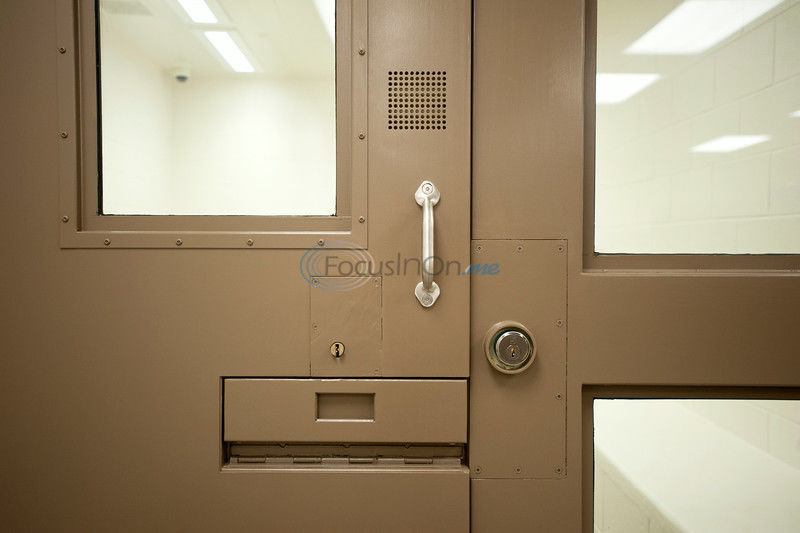 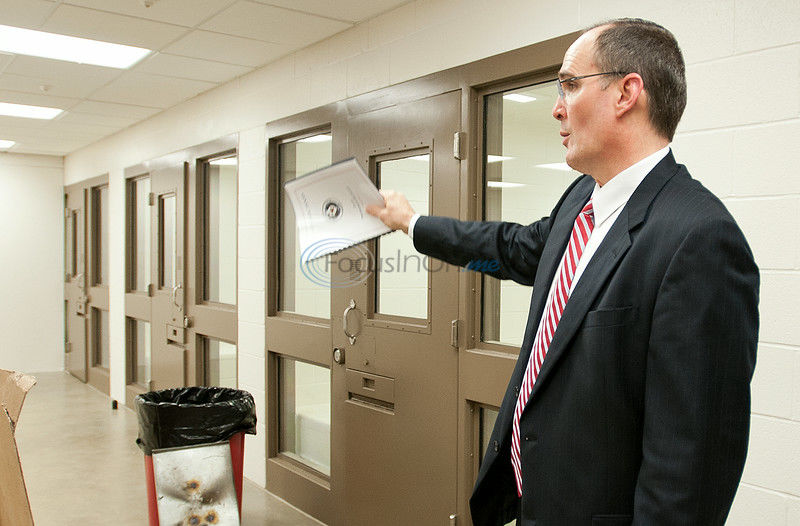 photo by Sarah A. Miller/Tyler Morning Telegraph Smith County Judge Joel Baker stands by holding cells in the new booking area at the downtown Tyler jail Monday Aug. 18, 2014. The jail renovations are set to be complete by November.

photo by Sarah A. Miller/Tyler Morning Telegraph A new addition to the downtown Tyler jail will be the infirmary for basic medial care, pictured here Monday Aug. 18, 2014. The jail renovations are set to be complete by November.

photo by Sarah A. Miller/Tyler Morning Telegraph Constructions continues Monday Aug. 18, 2014 at the downtown Tyler jail. The jail renovations are set to be complete by November.

photo by Sarah A. Miller/Tyler Morning Telegraph Smith County Judge Joel Baker stands by holding cells in the new booking area at the downtown Tyler jail Monday Aug. 18, 2014. The jail renovations are set to be complete by November.

Now, construction on the voter-approved $35 million, six-story, 87,000-square-foot expansion of Smith County’s central jail is nearing completion. The expansion will add 384-bed “high security” beds and eventually end inmate transfers to other counties, which has been required since 2004 to meet state inmate population standards.

Commissioner Jeff Warr said the expansion/renovation project is slated to be open for use in October and for a public tour for interested residents in November.

The new tower adjoins the downtown facility on the corner of Fannin Avenue and Erwin Street. It adds 384 double-occupancy cells for around $22 million, or $290 per square foot.

It would bring the downtown occupancy to 660.

As Phases 2 and 3 near completion, Warr and county officials invited the Tyler Morning Telegraph to tour the jail Monday and view progress.

Phases 2 and 3 include renovating the downtown jail’s book-in area, with county and state officials calling existing facilities inadequate and unsafe for jailers and the public.

The existing space includes holding cells that can accommodate 30 prisoners, a 10-by-12-foot book-in station, a narrow hallway and benches for suspects.

The new 5,400-square-foot intake area includes new features to keep jailers safe, improve their available work space and keep offenders brought to the jail for everything from traffic warrants, drunkenness and murder, separated appropriately as they are classified to enter the inmate population or be released on bond.

The holding cells will accommodate 85 people awaiting movement to jail cells or release via the bond process.

There will also be benches inside the booking area, where people arrested for minor charges and traffic warrants will sit and wait to be released or booked.

Warr said the space would add efficiency to the justice process, allowing those arrested for minor crimes to be processed more quickly, reducing prisoner backlogs and crowding.

“The flow is horrible (now) when they are busy,” County Judge Joel Baker said.

Addressing the flow of the entire downtown facility was a major part of the project. Areas were renovated to maximize space and movement of inmates as they are processed through the legal system. Features, such as administrative space, will help staff and other law enforcement agencies do their day–to-day work. For the first time, jail staff and in-house physicians and nurses will perform the majority of health-related care inside the jail rather than shipping inmates to local hospitals. Lawyers and their clients will have new, more secure space to discuss their cases.

More than $3.3 million, an average of almost $130 a square foot, was spent on a visitation area, office and administrative space, a vehicle sally port and an infirmary.

The sally port, where various county wide law enforcement officers drop off suspects and the Texas Department of Criminal Justice picks up convicted felons, will enter and exit on Fannin Avenue rather than Elm Street.

The old sally-port area was renovated into the book-in area and part of the new infirmary. The old kitchen and laundry area, which was moved to the county’s Low Risk Facility on U.S. Highway 69, created most of the space for the infirmary, where inmates’ basic healthcare will take place.

Warr said the infirmary would also add efficiencies and reduce costs because inmates could be cared for in-house rather than transported to local hospitals under jailer supervision.

Inmates enter the jail with a gamut of health care issues including pregnancies and diabetes, or become injured. The infirmary includes space for beds, treatment areas, isolation rooms for inmates with communicable diseases, and basic dentistry.

“Anytime an inmate leaves the jail there is a risk of something bad happening,” he said. “It’s best that once they’re in here, they’re in here until they are released or go to prison.”

The security level of the jail is being improved as new cells continue to be placed inside the “tower,” Warr said.

Cells are pre-fabricated and craned into the structure, then moved into their permanent place. Each two-story pod will allow one detention officer to control activity of up to 48 prisoners, in what is called a “direct supervision” setting.

Cells open to a dormitory-style living quarter with tables and common areas with the officer controlling movement from a station within the pod.

The county upgraded the cells to “high risk,” to reduce situations that might limit available prisoner space. High-risk cells can be occupied by lower security level inmates, but high-risk inmates cannot be housed in lower security locations.

Warr said he has received numerous compliments about how the outside of the jail expansion ties in with existing buildings around downtown.

“A lot of people have said it would be hard to recognize it as a jail,” he said. “It just looks like a nice building downtown.”

Downtown construction within a working jail that includes high- and medium-risk inmates has been a daunting task for contractors, Warr said. He said the amount of work to keep jail operations up to the state jail commission’s requirement cost time and money but that the project won’t go over-budget because there was a guaranteed maximum for the project.

The guaranteed maximum, the amount the county can be charged by the contractor, is $35 million, Warr said. Warr believes the project would have gone well over budget because the project had to tie in to a working jail.

Warr said residents would rather pay for parks and roads rather than a sewer system or a jail but that the latter are important needs. The court appears poised to phase in entry to the jail expansion, which means it could continue shipping inmates for the next year.

But Warr views the expansion as the end of renting jail space versus owning it. He said voters stepped up to end inmate shipping, which has cost the county around $2 million each year for the past decade.

“Nobody wants to build a jail but it’s something a community has to have. We’d spent $20 million renting (jail space) in other counties,” Warr said. “The taxpayers are going to have a good product that can be used for decades upon decades.”

“But he said to me, ‘My grace is sufficient for you, for my power is made perfect in weakness.’ Therefore I will boast all the more gladly about my weaknesses, so that Christ’s power may rest on me.” (2 Corinthians 12:9)