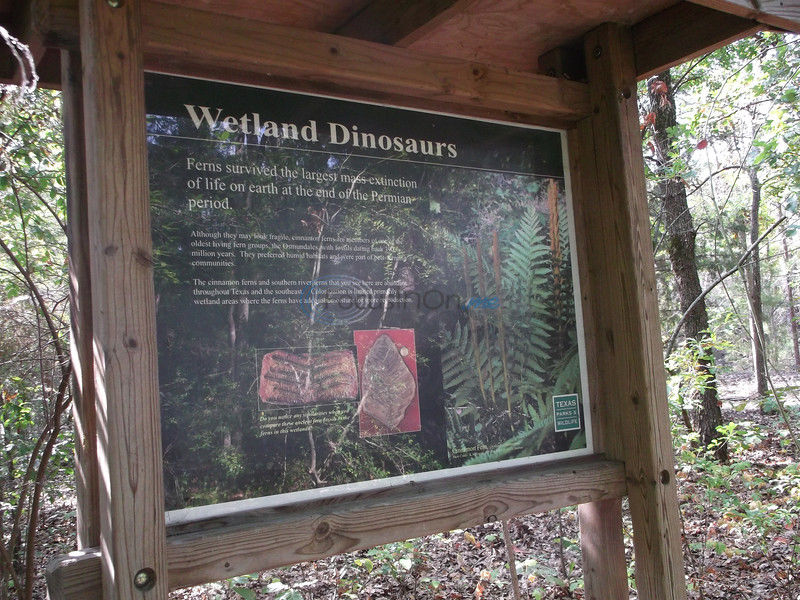 Betty Waters/Staff Ferns, which survived the Permian extinction event, are the topic of a kiosk on the wetlands trail at the Texas Freshwater Fisheries Center in Athens. 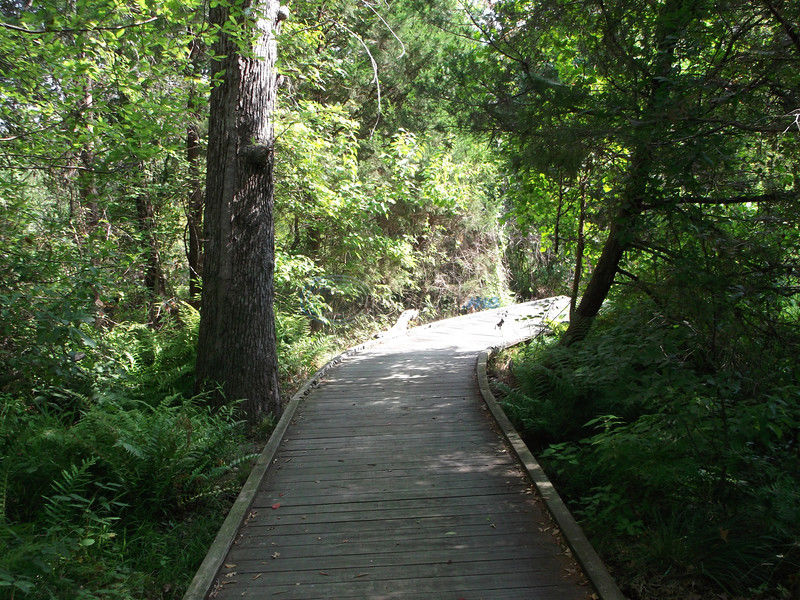 Betty Waters/Staff The trail meanders through a wooded area and provides information about plant and animal life. 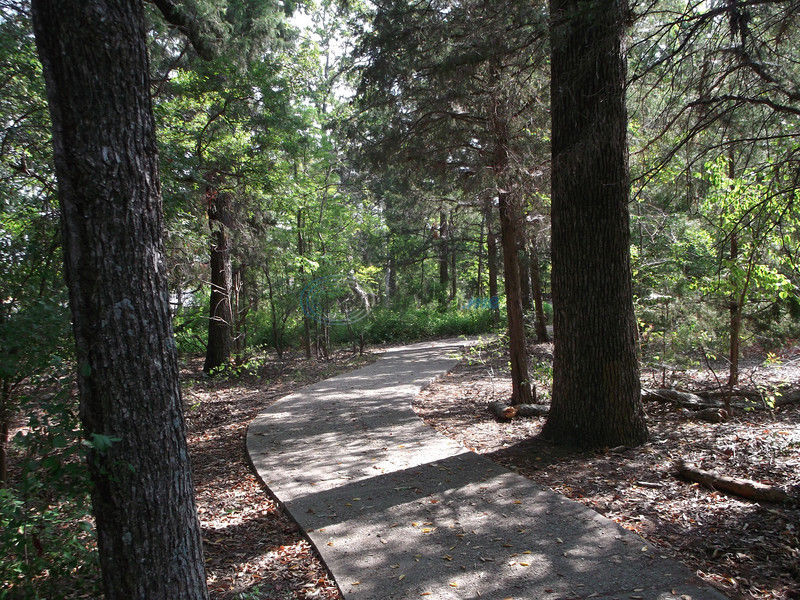 Betty Waters/Staff Ferns, which survived the Permian extinction event, are the topic of a kiosk on the wetlands trail at the Texas Freshwater Fisheries Center in Athens.

Betty Waters/Staff The trail meanders through a wooded area and provides information about plant and animal life.

ATHENS — The wetlands trail at the Texas Freshwater Fisheries Center gives visitors an up-close, educational and leisurely look at plant and animal life in the wetlands. Wetlands are areas soaked in water along the banks of streams, rivers, reservoirs and the Gulf coast.

The wooded, concrete trail meanders about 1.3 miles and is accessible to the handicapped.

Special attractions on the wetlands trail include an observation beehive and a nature communication center. Kiosks provide interesting information about nature, wildflowers, plants, birds and wildlife.

Walkers along the trail explore a fascinating but rapidly vanishing ecosystem.

According to an exhibit on the trail, wetlands provide natural flood and erosion control, filtering pollutants out of fresh water runoff before it reaches the Gulf. It also offers food and shelter to fish, waterfowl and other wildlife as well as recreation to people.

Beneath the surface of a tranquil pond beside the trail is a frenzy of activity, an exhibit states.

Cattails, water lilies, lotus and other plants help purify the water by trapping and absorbing pollutants — their roots, stems and leaves slowing the destructive flood of rain storms. The display notes that wetlands are so effective in cleaning water that some cities now utilize them for wastewater treatment.

Plants especially adapted to living in saturated soil thrive in wetlands as do migratory waterfowl, turtles, fish and other aquatic animals, while deer and small mammals join song birds and game birds feeding in the wetland lush vegetation, states a trail exhibit. The wildlife in turn attracts predators like snakes, coyotes and alligators.

Pitcher plants are perhaps the most bizarre plants found in wetlands, a kiosk near a bog containing Texas Trumpet Pitcher Plants states. They are carnivorous with modified leaves shaped like a hollow tube to trap and digest insects.

A wooden shed at the end of Honey Lane houses a honeybee hive with several informative posters about the life cycle of the honeybee, the role played by different bees and life in the colony.

An illustration notes honeybees communicate information about food sources with a set of gyrating movements, known as the waggle dance.

A recording that trail visitors can listen to in the shed states that of all the insects in the world, honey bees are undoubtedly the most beneficial to man since they provide a sweet-tasting nutritious honey to eat, and also yield bees wax used in the candle industry and in floor and furniture waxes, lipsticks and ointments.

Bees also are valuable in pollinating fruits and vegetables.

A "bee facts" poster notes that honey is the only food that does not spoil. To make one pound of honey, worker bees in a hive fly 55,000 miles and tap two million flowers. A productive hive can make up to two pounds of honey a day.

The queen bee is the only fertile female in the hive, according to the poster. A queen can lay her weight in eggs, producing one egg per minute day and night, or 1,500 eggs over a 24-hour period and 200,000 eggs per year.

The hive that visitors see contains about 5,000 bees.

Farther along the trail are wildflowers, with the fisheries center having more than 100 wildflower species.

A kiosk about wildflowers points out Texas has more than 5,000 species of flowering plants, but only about 1,000 are in the category of wildflower. They include the Texas blue bonnet, black-eyed Susan, golden rod, prairie spiderwort, crimson clover and Indian paintbrush.

"A wildflower area for much of the year looks like a weedy mess but in the spring and fall can be a riot of color," the kiosk states.

Another kiosk shows waterfowl nesting in the wetlands. Water fowl and other migratory birds depend on nutrient-charged wetlands to nourish their young, and many species of birds fly thousands of miles to return to their wetland breeding grounds, where they find suitable nesting sites and food for their young, the kiosk states.

The nature communication center is an octagonal-shaped structure along the wetlands trail that displays several exhibits and also features recorded audio presentations.

Communication can be visual, auditory, tactile or chemical, with animals using communication to attract mates, warn off predators, mark territory and to identify themselves to their young.

From the roar of a lion to the chirp of a tiny cricket, sound is categorized by its frequency or pitch, which is expressed in hertz, according to the exhibit.

But it notes examples of tactile communication, such as cats and dogs licking and nuzzling their babies, primates grooming each other and bear cubs wrestling.

In chemical communication, the exhibit states that many animals use their scent to mark territory or attract mates, and they use the scent of other animals to identify or to find prey.

For example, cougars, bobcats, lynx, bears, wolves and coyotes leave posts marked with urine or feces to delineate the boundaries of their territory and to warn intruders. Domestic cats use scent glands near their mouth, on their foreheads and at the base of their tails to claim an object as their property.

A bird can sing two notes at the same time or even sing a duet with itself because birds have an organ called an syrinx resembling an upside down "Y" with part resting in each bronchi and each half capable of making a sound, the exhibit states.

But nearly half of the birds in the world do not sing and singing is limited primarily to perching birds and usually only the male sings, according to the exhibit.

Visitors can push buttons under the pictures of various birds to listen to their sounds.

Mammals have the most complex communication systems in the animal kingdom, the exhibit points out. For example, a cat is capable of making at least 19 different types of meow, which differ in pitch, rhythm, volume, pronunciation and the situation in which they are used. Purring is used for contentment and self-assurance.