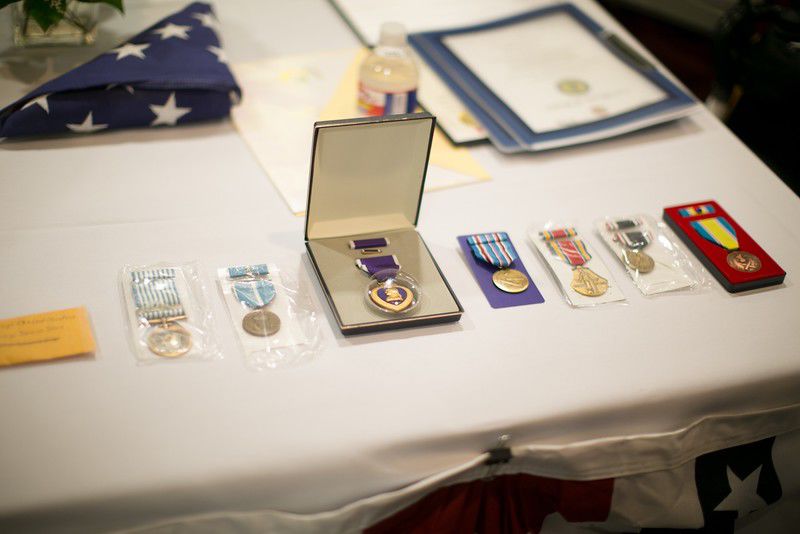 Courtesy Nine medals are displayed that U.S. Rep. Louie Gohmert presented to Puett Wilcox of Longview, who is believed to be the last East Texas surviving World War II prisoner of war 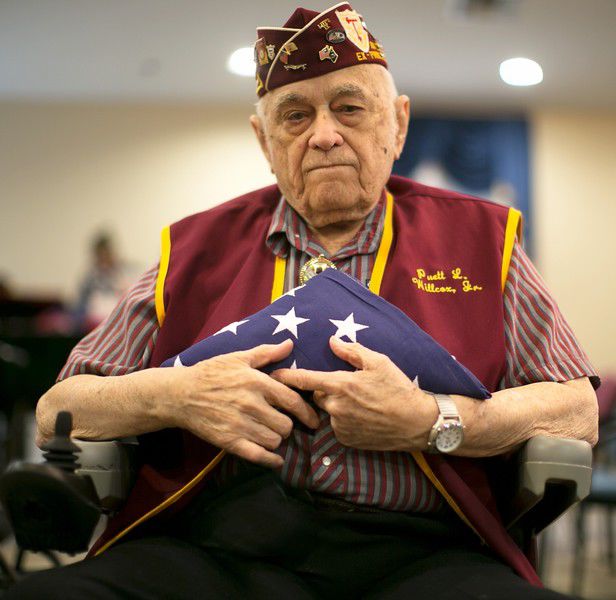 Courtesy Puett Willcox, a resident of Buckner Westminster Place retirement community in Longview, who is believed to be the last surviving East Texas World War II prisoner of war, clasps a U.S. flag after he was presented several medals on Oct. 25 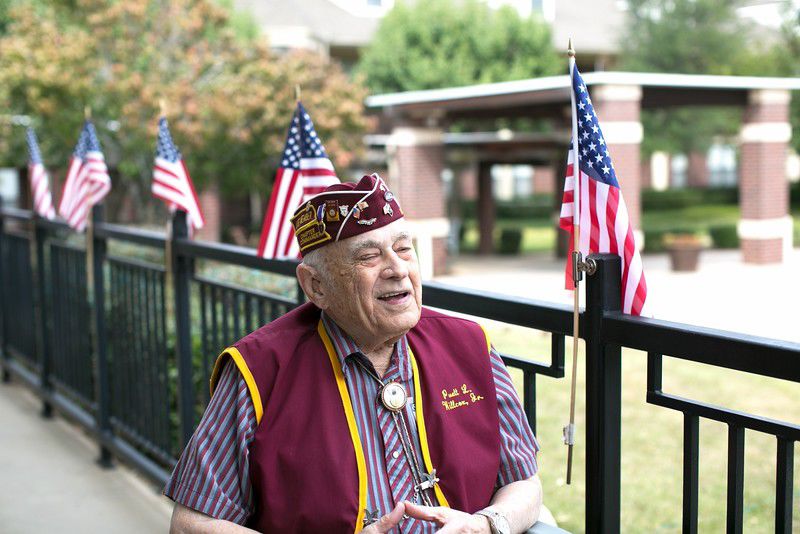 Courtesy Nine medals are displayed that U.S. Rep. Louie Gohmert presented to Puett Wilcox of Longview, who is believed to be the last East Texas surviving World War II prisoner of war

Courtesy Puett Willcox, a resident of Buckner Westminster Place retirement community in Longview, who is believed to be the last surviving East Texas World War II prisoner of war, clasps a U.S. flag after he was presented several medals on Oct. 25

As he strapped his harness into place, he could feel something terrible was going to happen on this particular mission. His faith assured him he would be taken care of, so off he went as a ball turret gunner in the B-24 he was accustomed to crewing.

The date was May 10, 1944, 17 days before his 20th birthday. His aircraft was flying at 28,000 feet when Germans began firing cannons from the ground. One of the shells smashed through his aircraft, splitting the B-24 in half and knocking him unconscious. The plane blew up with him still inside.

When he awoke, he was tangled in ammunition and control cables, hanging upside down from the wing of the plane and spiraling toward the ground at hundreds of miles per hour. He pried himself free and was about to open his parachute when another chunk of debris slammed into him. At 2,000 feet, after several seconds of free falling, he finally had the clearance he needed to open his parachute. Just when the chute opened, a hail of gunfire from 30 German soldiers pierced the parachute’s cloth, missing him by only fraction of an inch. When he hit the ground the Germans captured him and declared him a prisoner of war. He would be held captive for a year before being released.

This story is the real-life experience of World War II veteran Puett Willcox, a resident of Buckner Westminster Place, a Longview retirement community. He is believed to be the last prisoner of war remaining in East Texas.

To commemorate his service and the brutalities he endured, U.S. Rep. Louie Gohmert presented Willcox with nine awards, one of which is a Purple Heart, during a special ceremony Oct. 25. The awards are in addition to ones he received previously.

Willcox shared his story to educate people about WWII and the perils that he and fellow comrades endured. These stories, he insists, are not covered by today’s history books.

“I am 92 years young, and I believe it is of vast importance for veterans to share their stories so that people know our individual experiences and what happened during those times of war,” said Willcox.

“Many young children don’t have a formal education on these wars in their history books. There is one history book I looked through that only had one sentence devoted to WWII. Other books have a page, maybe two that discuss the war. When I started traveling to schools to share my story, the children were really intrigued and had several intelligent questions for me. I was happily surprised and eager to share anything I could with them. Many soldiers and veterans make the mistake of not sharing their stories with anyone, not even their families. If I could offer some advice to anyone who has served our country and gone through hell, it’s this – get it all off your chest by telling people about it. Tell your loved ones your stories. No matter how gruesome they may be, you need to talk about it.”

Willcox learned that the other five crew members he was captured with who returned to East Texas didn’t tell their families anything about their service. Willcox then spent time with some of the families after their deaths, enlightening them with what their loved ones went through. He stayed with one family for three days answering their questions so they could understand. The families were relieved to finally know, as the men had kept their pain hidden for years.

For Willcox, interjecting humor and stories of camaraderie makes sharing the stories of pain a little easier. He also worked to forgive the people who hurt him and fellow comrades, such as the German soldier who towered at 7 feet tall with a monstrous build. That soldier was so strong he grabbed an American POW by the shoulder and squeezed him until his collarbone snapped.

“This is why we are receiving Purple Hearts,” said Willcox. “We shed blood as prisoners of war, wounds that were sometimes as severe as combat wounds. During boot camp we were encouraged to harass guards if we were captured. If we gave them a hard time, they were likely to put more guards on us as opposed to putting them on the front line. Our prison camp had about 17,000 American prisoners, and in Europe there were about 148,000 in total. My group was comprised of 4,000, and I can say that we never fought over food even though it was incredibly scarce. I weighed 160 pounds when I was captured and dropped to 92 pounds within the first 43 days. When I was released I weighed a mere 78 pounds. We were all skin and bone, yet we shared. Unlike us, the Russians fought over their food and there was a terrible sense of morale.”

One night, 75 of the prisoners were put in a barn, and alongside one wall of this barn were 58 milk cows. Willcox learned how to milk when he was 2 and a half, so at 1 a.m. he set about collecting containers and milking the cows so the men could have a taste of milk. People kept coming with the containers and he kept pushing, even though his arms and hands were utterly exhausted. He kept at it until everyone in that barn had 8 ounces of milk. He even made sure not to exhaust the cows' milk supply of so the farmers yield wouldn’t be hurt. The prisoners supported each other as best as they could.

“On May 2, 1945, we were 700 days into a death march headed west to Brussels when we stopped at an intersection,” said Willcox. “The commander went forward and came back with the British Second Army who liberated us. We were then processed in Brussels and sent to France where we awaited ships to take us home. I came to Longview where my sweetheart was waiting for me and was happily reunited with her. During my time away, I was able to write four postcards a month at the camps. I kept in touch with her and other family. After our meeting, I tried reaching out to family and learned they were all at the hospital visiting my grandmother on her sickbed. I walked in just as they were reading her a letter they had just received from me that I wrote a month back. I took her by the hand at the conclusion of the letter and said that I meant every word of it. She beamed at me and was filled with joy.”