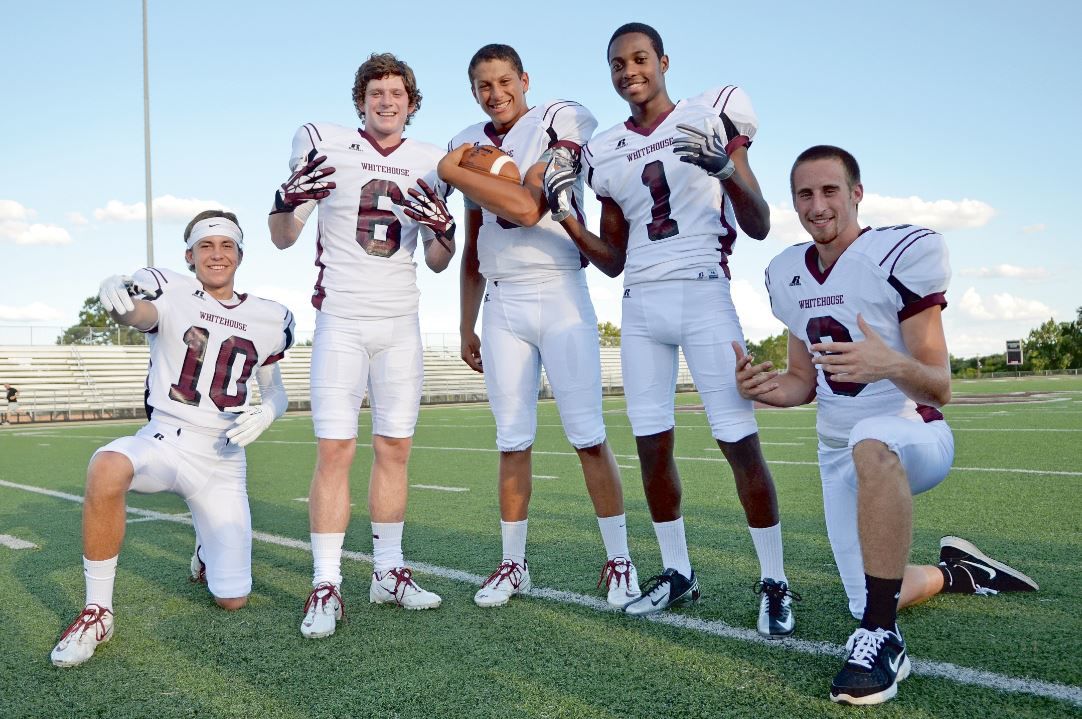 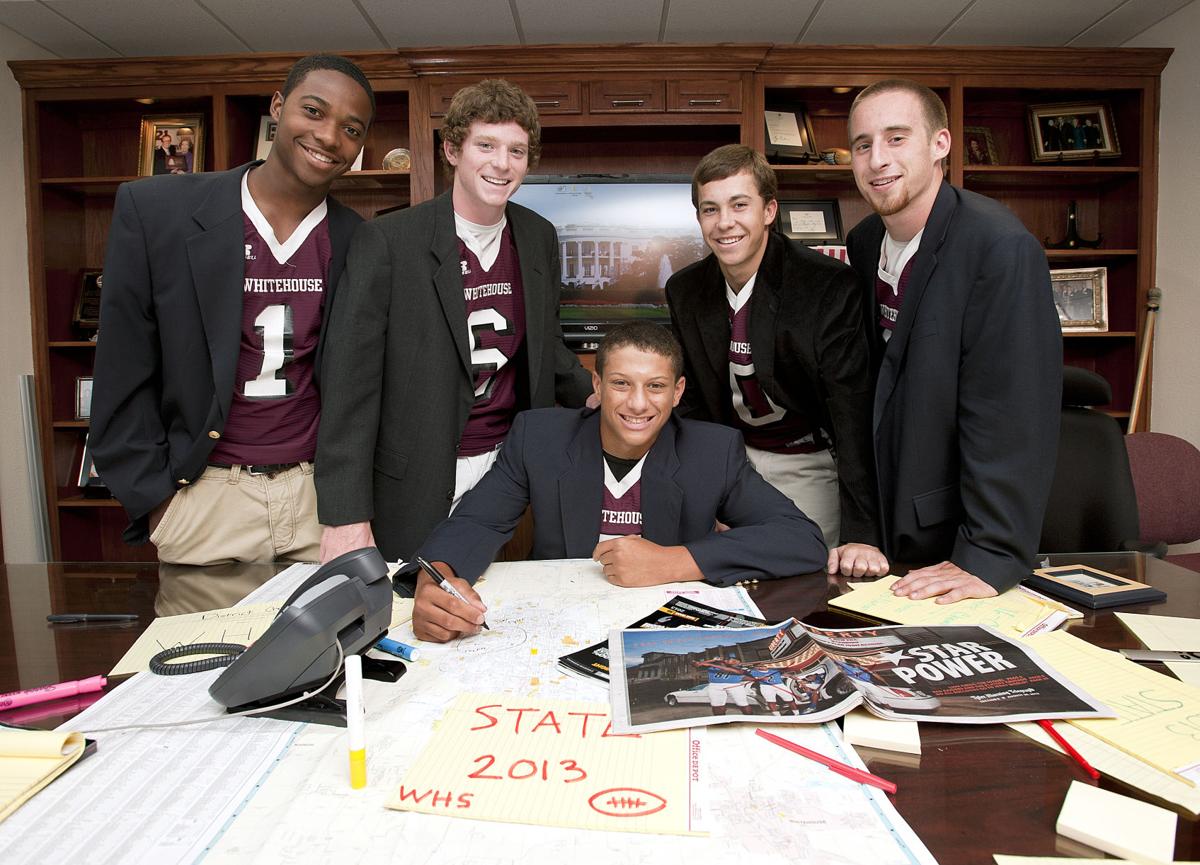 In this 2013 Tyler Morning Telegraph Pigskin Preview photo, the Whitehouse Wildcats were shown planning strategy for the coming season — from left, Jaylon Dews, Coleman Patterson, Patrick Mahomes, Jake Parker and Ryan Cheatham. While Mahomes has gone on to become NFL MVP and lead his Kansas City Chiefs to the Super Bowl, he has maintained friendships with his buddies, some dating back to elementary school. 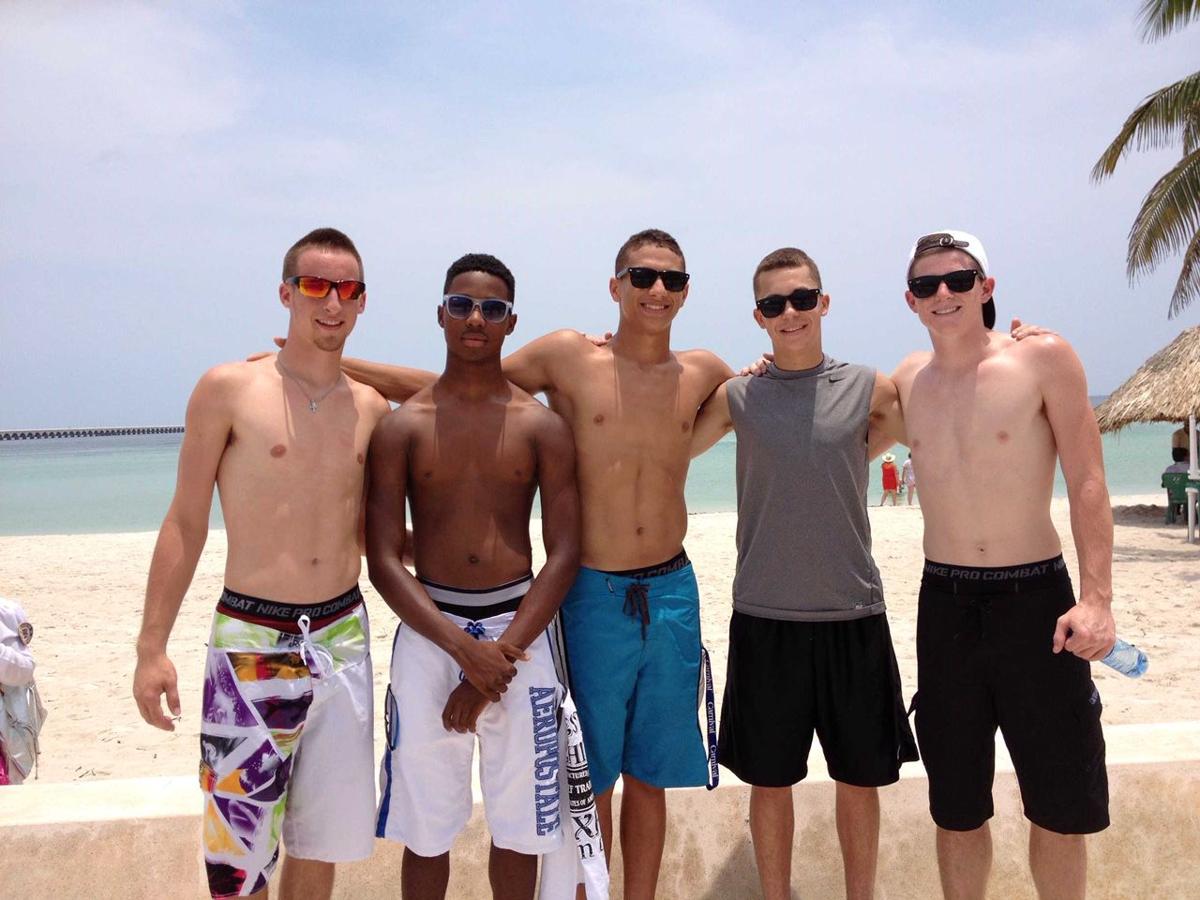 Patrick Mahomes and his friends have been close buddies, many from their elementary school days. Here is a photo of when they took a trip to Cozumel, Mexico (from left, Ryan Cheatham, Jaylon Dews, Mahomes, Jake Parker and Coleman Patterson).

In this 2013 Tyler Morning Telegraph Pigskin Preview photo, the Whitehouse Wildcats were shown planning strategy for the coming season — from left, Jaylon Dews, Coleman Patterson, Patrick Mahomes, Jake Parker and Ryan Cheatham. While Mahomes has gone on to become NFL MVP and lead his Kansas City Chiefs to the Super Bowl, he has maintained friendships with his buddies, some dating back to elementary school.

Patrick Mahomes and his friends have been close buddies, many from their elementary school days. Here is a photo of when they took a trip to Cozumel, Mexico (from left, Ryan Cheatham, Jaylon Dews, Mahomes, Jake Parker and Coleman Patterson).

On Sunday, Patrick Mahomes will be on America’s biggest sports stage.

The Kansas City Chiefs star quarterback has become one of the more visible players in America’s favorite league, the National Football League.

Advertisers are craving to be associated with the humble and magnetic personality, who is a genuine good guy.

Mahomes is all about family, friends and faith.

In fact, some of his best buddies are who he met in elementary school. The Group of Five from Whitehouse High School appeared in the Tyler Morning Telegraph’s Pigskin Preview back in 2013. For the cover story, the quintet was in The Situation Room planning for the coming season. Not only were they best friends, but Mahomes, of course, was the quarterback, with his top receivers — Ryan Cheatham, Jaylon Dews, Coleman Patterson and Jake Parker.

Patterson and Parker went on to join Mahomes on the Texas Tech football team, while Dews played at Southern Arkansas and Ryan Cheatham chose the baseball path where he helped Tyler Junior College and UT Tyler to national championships.

The friends all played Little League, Little Dribblers and select baseball together and in high school it was all about Wildcat football, basketball and baseball.

“We first became friends (in elementary school),” Patterson said. “In high school, athletics is different from Little League and Little Dribblers. You are together everyday, hour after hour, traveling together. It was football, basketball, baseball every year.”

Parker added, “At first, Patrick was going to school at All Saints and I was going to school in Tyler. We were 9 or 10 years old when we became friends and our families moved to Whitehouse. We played on the Junior League World Series team that went to Taylor, Michigan. We won the United States championship before we lost to Chinese Taipei.

“I remember growing up around Patrick’s dad (Pat Mahomes), and thinking how cool it was, this guy played in the Major Leagues.”

Both Patterson, a Texas Tech marketing graduate who resides in Fort Worth, and Parker, who returned to playing football at Howard Payne University in the fall, both knew Mahomes was “a phenomenal athlete” and both thought he would go the baseball route.

“In high school, we were always thinking about college, college, college; where we could go to college for scholarships and to help defray costs,” said Patterson, who works for Science Forward, a pharmaceutical company based in Houston. “I really hadn’t thought of Patrick going to the pros until our sophomore year at Tech when we beat Arkansas (the Red Raiders won 35-24 in Fayetteville, Arkansas, and Mahomes hit on 26 of 30 passing attempts). I knew he had the talent and I thought now this is for real. Then it was wow, OK, he’s going to make it.”

Parker’s timeline was about the same.

“We were freshmen at Texas Tech. Patrick got into a few games and I was redshirting,” Parker said. “I thought OK, he is going to have a great college career. Then the next year when we were sophomores, I thought wow, he can play in the NFL. During the offseason between freshman and sophomore he grew to love football even more.”

Patterson, son of UT Tyler athletic Director Dr. Howard Patterson, feels that he, Mahomes and their friends are “thankful” to be raised in this area.

“We always credit growing up in East Texas, having great role models and believing in team, not individualism,” Coleman said. “That’s what Patrick is all about.

“You look at athletes in Tyler and Whitehouse, they are never ‘me, me, me,’ it is always ‘team, team, team.”

After working in the oil fields for a couple of years, Parker, whose dad Chad coached the team that went to the Junior League World Series, decided to go back to college, not only to get his degree but also play football again.

“I love the game and I didn’t want to look back and say I should have played,” said Parker, who had 32 catches for 415 yards for Howard Payne, an NCAA Division III school that competes in the American Southwest Conference.

The games kept Parker from attending a Chiefs game until the AFC Championship, a 35-24 KC victory over the Tennessee Titans.

“Luckily, Patrick had tickets for Jake, (Cheatham) and myself,” Patterson said. “We are hoping for the first of many Super Bowls for Patrick. The sky is the limit for Patrick.”

“It’s great to get to go to the Super Bowl and look out there and your buddy is playing,” Parker said. “It will be so surreal.”

Read all of our Patrick Mahomes articles HERE