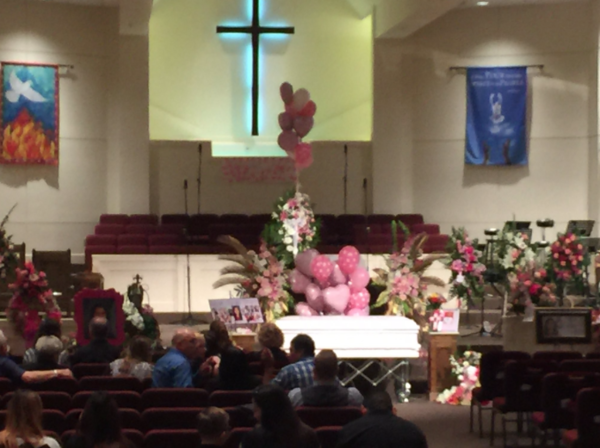 Mourners begin to gather at Lanes Chapel United Methodist Church before 1 p.m. Tuesday for the funeral of Kayla Gomez-Orozco. 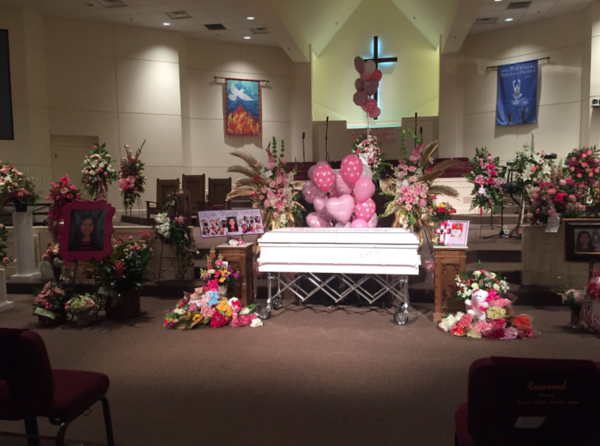 Photo by KYTX CBS19's Andrea Martinez via Twitter at @KYTXAndrea

Mourners begin to gather at Lanes Chapel United Methodist Church before 1 p.m. Tuesday for the funeral of Kayla Gomez-Orozco.

Photo by KYTX CBS19's Andrea Martinez via Twitter at @KYTXAndrea

The funeral was followed by internment  at Rose Lawn Cemetery, just blocks away from Dr. Bryan C. Jack Elementary School where Kayla was in fourth grade.

A memory book has been set up for the family of Kayla Gomez-Orozco. If you can't make the service, send me your message to the family pic.twitter.com/rGPlROfXhC — Cory McCoy (@TMT_Cory) November 9, 2016

During the funeral, several family members spoke about Kayla and offered hope to those mourn.

"When I heard the news, I kneeled down, and as time went by, the pain got bigger," Jorge Orozco said. "We heard the news Saturday afternoon. My heart was broken. It was crushed, totally crushed, and I wanted to question God, but I couldn't question God."

Jorge Orozco said while he may not understand why Kayla was taken, he and all who are broken-hearted can find hope amid their pain in knowing God and trusting that through Him those who loved Kayla will see her again in Heaven.

"She leaves us a sign of hope, an example for us to follow — to follow her innocence, to imitate her innocence and her pureness ... her smile. She was always smiling. She was so kind that only a heart full of Jesus Christ can be like that and can only be found through some parents who will educate her in the ways of the Lord.

"They taught her about the love of God — the love that is testing all of us," he said.

Kayla was described as a kind, sweet girl who smiled a lot. A person who was a friend to everyone. She enjoyed playing soccer, excelled at school, and she wanted to learn to play the guitar, so she could worship God. She wanted to be a doctor.

Kayla's brother, Kenneth Gomez, also spoke, beginning by thanking the many people who had shown his family love and support over the last week.

"I thank everyone, my professors, my classmates, my family," Kenneth Gomez said. 'We never expected this much support. I wasn't aware of how amazing my neighbors were."

Kenneth Gomez said Kayla was his princess and he would miss how every night when he'd come home from either work or school, Kayla would wait on him, so he could kiss her goodnight.

Kenneth Gomez spoke about how he enjoyed pleasing his little sister.

"She'd be by my side, hugging her. That was my way of having her by my side, pleasing her. I could tell looking in her eyes she could never have enough time with her brothers.

"Just being with her for a few minutes, I knew I made her day," Kenneth said. "And the rest of the week, she'd remind me, thank you, thank you, brother."

He said Kayla was selfless and was always worrying about others more than herself.

"She was not one to ask for many things," Kenneth Gomez said. "She never complained. She wouldn't come to you with her problems; she'd try to solve your problems."

He said many are asking where Kayla's family is finding their hope and strength. He said the family has hope, knowing Kayla is in a special place.

He encouraged the mourners, saying Kayla is singing with an angelic choir without limit, without pain, without being tired.

"There is also no better place where she can feel as secure as in the presence of God," Valera said. "The most wonderful place one can have this joy is being close to our Savior Jesus Christ. There is no doubt that Kayla is in this place enjoying that eternity."

He said many gathered there have fond members of Kayla, of her smile, of her viewpoint on life.

He said these things should remind everyone in attendance to seek God themselves, and this tragedy should encourage them to consider their own eternity.

"First I want to thank God. Even though this is a painful moment, but because of Him, we are here together, with one feeling, with one pain," he said.  "It's not easy. ... Thanks to everyone, and everyone of you, personally. In the name of my aunt and uncle, of all my whole family, we have no words to say thank you. So many prayers. So much love. So much support they have given us these last couple of weeks. Today our princess Kayla is resting."

Gonzalez reminded everyone of how special Kayla was and how she transformed the lives of those who were close to her, and now, even those who never met her but over the last week were touched by her.

"She was so special. From the first moment to the last moment, she was special," he said. She might not be with us in the physical, but she's going to live within our hearts and our minds, and there's going to be so many things that will remind us of her. From the time that my uncle and my aunt received the notice they would be blessed with a precious angel, with someone very special, someone so beautiful.

"This angel sent by God united us, cities, states and even outside this country," he said. "We were united in praying for her."

"Maybe this is the mission from Kayla, to unite us, each one of us, to show us what we have forgotten — there is an almighty God who is willing to help us, willing to rescue us, willing to transform your life."

The funeral closed with everyone in attendance linking hands and praying together.

You can see Kayla's school, Jack Elementary, from the spot where she will be laid to rest. She will forever be watching over her classmates pic.twitter.com/N1xu4bnNgt — Cory McCoy (@TMT_Cory) November 9, 2016