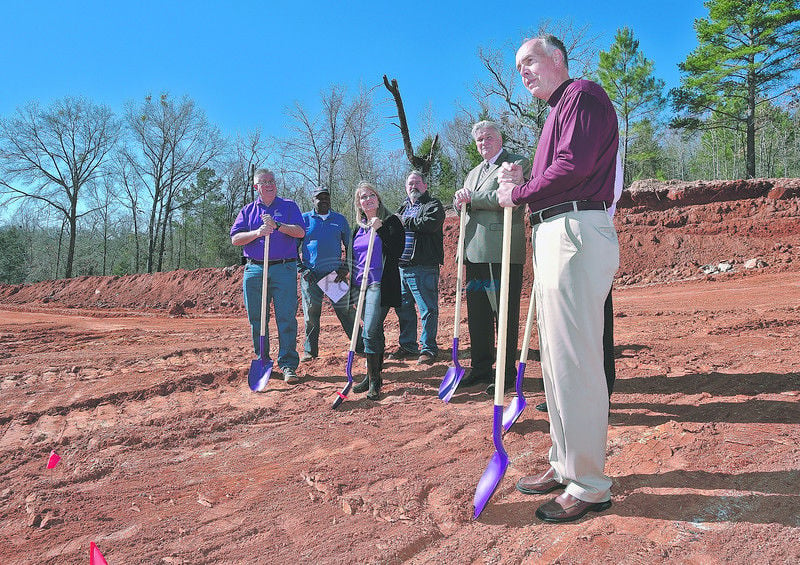 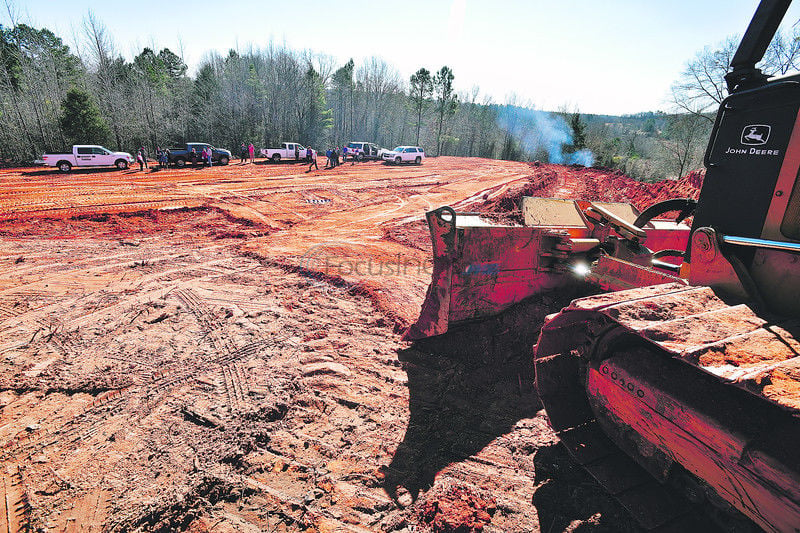 Earth moving equipment waits atop a hill before a groundbreaking ceremony Friday at the site of the future Hope Haven of East Texas long-term foster home for girls east of Lindale. When completed, the 6,500 square foot facility will have dormitory-style, long-term housing for 16 girls from the foster system aged 13 to 17 years, Hope Haven Chairman Paul Christman said. Andrew D. Brosig/Tyler Morning Telegraph 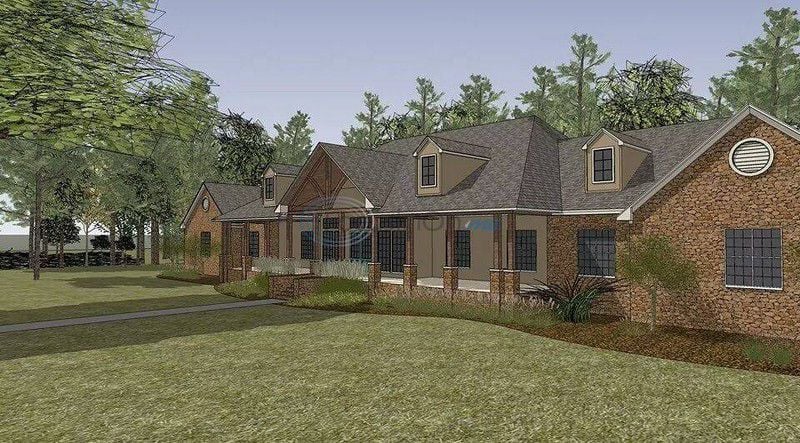 Pictured here is a rendering of what the Hope Haven of East Texas long-term foster home for girls will look like once completed. Hope Haven leaders and supporters broke ground on the facility Friday east of Lindale. When completed, the 6,500 square foot facility will have dormitory-style, long-term housing for 16 girls from the foster system aged 13 to 17 years, Hope Haven Chairman Paul Christman said. Courtesy 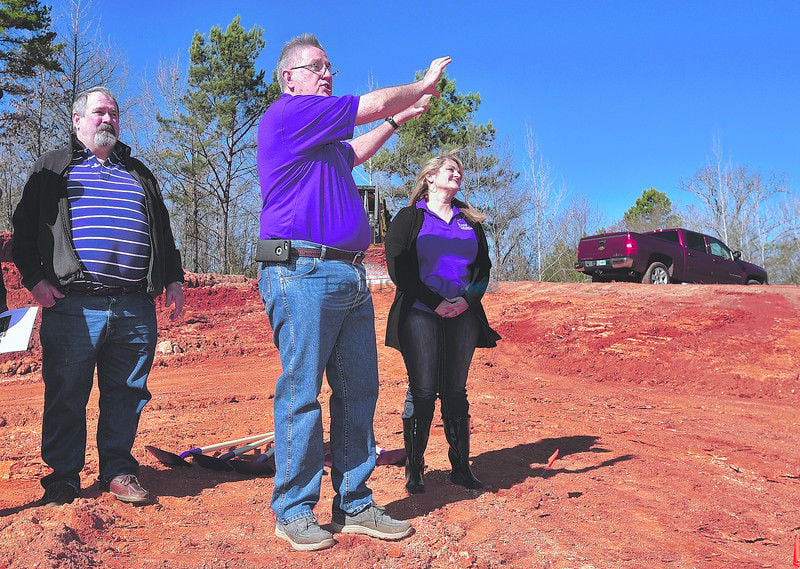 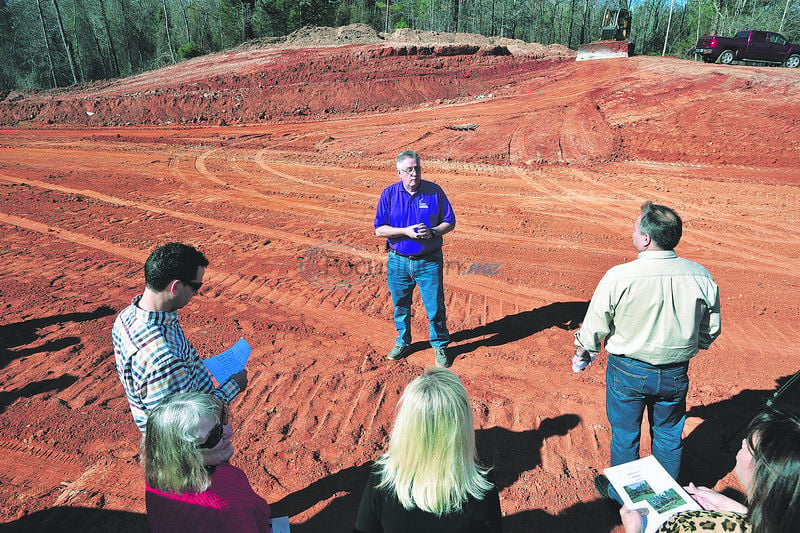 Earth moving equipment waits atop a hill before a groundbreaking ceremony Friday at the site of the future Hope Haven of East Texas long-term foster home for girls east of Lindale. When completed, the 6,500 square foot facility will have dormitory-style, long-term housing for 16 girls from the foster system aged 13 to 17 years, Hope Haven Chairman Paul Christman said. Andrew D. Brosig/Tyler Morning Telegraph

Pictured here is a rendering of what the Hope Haven of East Texas long-term foster home for girls will look like once completed. Hope Haven leaders and supporters broke ground on the facility Friday east of Lindale. When completed, the 6,500 square foot facility will have dormitory-style, long-term housing for 16 girls from the foster system aged 13 to 17 years, Hope Haven Chairman Paul Christman said. Courtesy

A dream formed in Lisa Ferguson's heart when she met Stormy. At 18, Stormy was staying in a local emergency shelter. She was about to age out of the state's foster care system and had no place to go, no family to contact and no real support system.

Ms. Ferguson saw in Stormy - and the other girls she met at the shelter - the girl she once was, and she knew they needed more.

Now, six years later, and with a great amount of support from the community, she is on the brink of realizing her dream.

On Friday, Ms. Ferguson, who is the founder of Hope Haven of East Texas, joined a group of the organization's board members and community supporters to break ground on a long-term home for teen foster girls.

Hope Haven Board Chairman Paul Christman said they found the ideal location because the property gives them privacy, but it is also within 5 miles of the Lindale schools, where the girls will attend.

Construction is expected to take nine months once it begins, with a planned completion date of late October or mid-November, Christman said.

"We think that for 16 girls that it eventually is going to provide them with a tremendous amount of opportunity to make a transition from adolescence to adult living and that's where they have the real difficulty," Christman said.

In fiscal year 2014, the latest data available, the state removed 1,265 children from their homes in the Tyler region, which includes 23 counties.

Of those children, 168, or about 13 percent, came from Smith County. That was the most for the region, followed by 125 in Henderson County and 112 in Gregg County. Every other county in the region had less than 100 removals. That same year, some 1,883 children in the Tyler region were in foster care.

When a child is removed from their home and placed in the state's care, there are a few options for where they can end up.

Some are placed in foster homes, with relatives or adopted. Others are placed in residential treatment centers or emergency shelters, among other options.

Judge Carole Clark of the 321st District Court in Tyler said teenage girls are the hardest children to find a place for in foster care.

This oftentimes is because of the issues they are dealing with or have experienced in their lives. Some are involved in drugs or adult behaviors. Others have emotional issues and/or came from chaotic, abusive homes.

And more than half of the girls in foster care have been sexually abused by a family member, she said. Because of this, finding and keeping a placement for these girls can be difficult.

Christman said the nearest home that can house girls in the East Texas region is in Marshall. There are three group homes in Smith County, but they accept only boys, he said.

Because of this, youth can sometimes get sent out of the region because there is nowhere to house them here, Christman said. This is where a home like Hope Haven can help.

Hope Haven will operate as a licensed residential treatment center, meaning it will provide a structured setting for girls with mid-level emotional and mental health issues.

The Hope Haven home will have eight bedrooms, with two girls per room. The bedrooms will be arranged suite style so two bedrooms share a bathroom.

There also will be a bedroom, bathroom and office for the director, as well as a staff bedroom and bathroom and counseling office.

The house will include a large kitchen, pantry, laundry room, recreation and dining areas, a living room and several porches and patios.

Christman said the estimated annual operating cost is $500,000 and the nonprofit will rely on a combination of donations and state funds to pay for that. The state provides the facility a certain amount of funds per child per day, he said.

The house will be staffed with at least 10 people including an executive director and administrator. There also will be a licensed counselor and case manager, among others.

The hiring will be completed this year in accordance with Texas Department of Family and Protective Services standards, Christman said.

Though the facility could serve girls from all over Texas, organizers hope it will serve primarily girls from Smith County or East Texas, Christman said.

Christman said Hope Haven is a faith-based organization and the girls who live there will have the opportunity to incorporate faith into their lives, though it will not and cannot be required per state guidelines.

He said faith is the basis and the motivation for what the people involved with Hope Haven is doing. The leaders will be looking for people of faith to work for the organization.

Beyond the house, Christman said it is important for the girls who stay there to be involved in the community.

He said they will go to Lindale ISD schools and the hope is that they will get involved at their respective schools, not only academically, but also with extracurricular activities.

"What we'd like to do is create about as normal a childhood as a young woman could have," Christman said.

Beyond this initial home, the organization is looking ahead to creating a transition home for 18- to 23-year-olds. This home would provide a support system for the young women as they transition to adulthood in hopes that they will be successful.

"This is not the end," Christman said. "This is what we see as the beginning for young women that don't have the same advantages as everybody else does."

$1 million for construction, land and furnishings

16 girls can be housed there

6.4 acres to house the center

Hope Haven is always in need of financial donations and volunteers. In addition, the nonprofit welcomes people with building or construction-related expertise who want to help or donate supplies during the construction process. Call 903-312-1829, email info@hhofet.org or visit www.hhofet.org for more information.