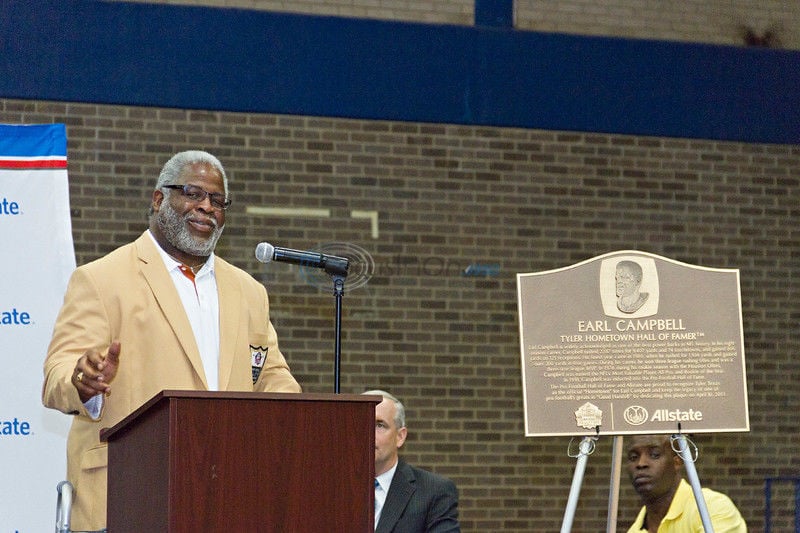 At the ceremony at John Tyler High School to honor Earl Campbell as a Tyler, Texas Hometown Hall of Famer, Mr. Campbell speaks to students and public in attendence about making positive choice so that you will be proud when you "look back in 50 years and say, what did I do with the gift God gave me?" ( Shannon Wilson / Tyler Morning Telegraph) 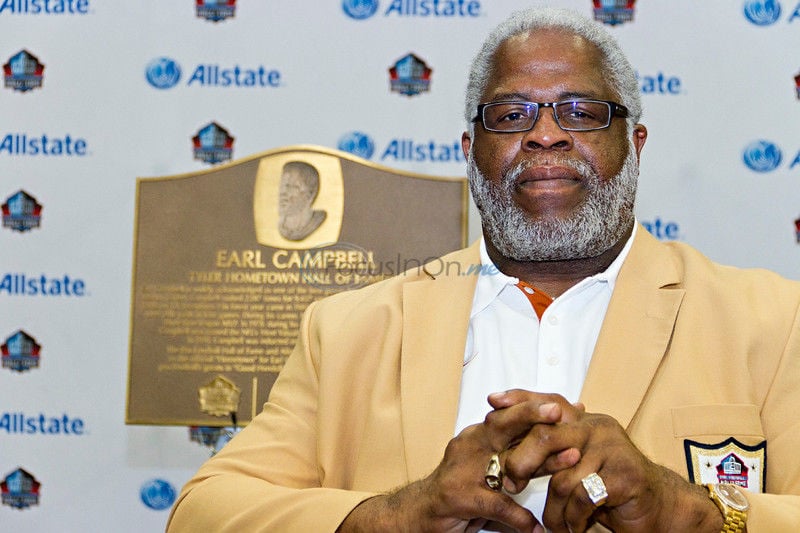 Earl Campbell poses for photos in front of the plaque that will be placed in John Tyler High School. (Photo by Shannon Wilson / Tyler Morning Telegraph) 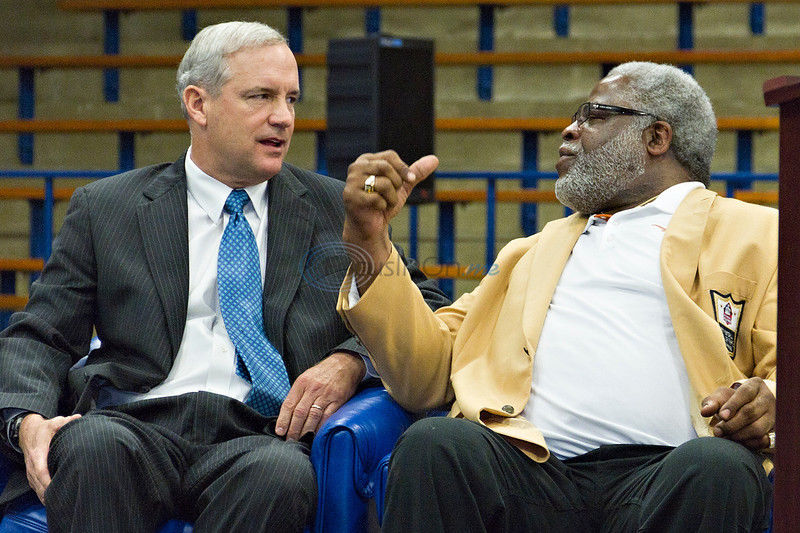 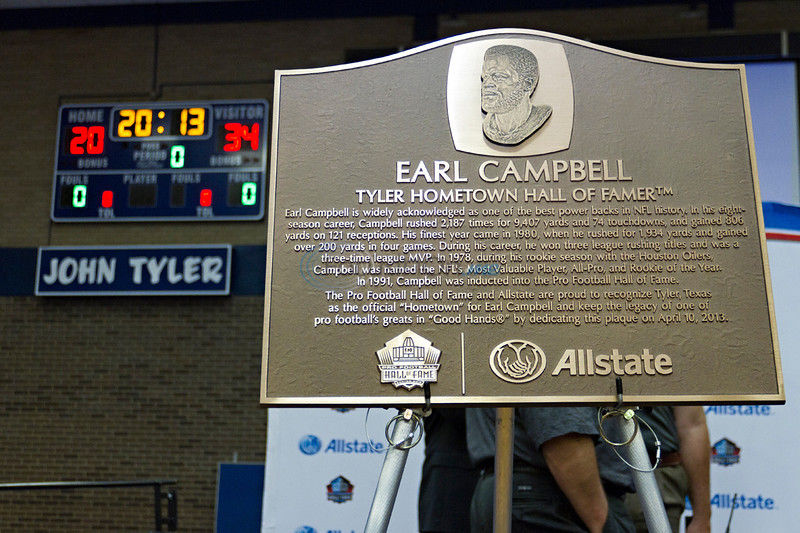 The plaque that will be placed in John Tyler High School with Earl Campbell's jersey number on the scoreboard, 20 when he played for John Tyler and the University of Texas at Austin and 34 when he played professionally football for the Houston Oilers. (Shannon Wilson / Tyler Morning Telegraph)

At the ceremony at John Tyler High School to honor Earl Campbell as a Tyler, Texas Hometown Hall of Famer, Mr. Campbell speaks to students and public in attendence about making positive choice so that you will be proud when you "look back in 50 years and say, what did I do with the gift God gave me?" ( Shannon Wilson / Tyler Morning Telegraph)

Earl Campbell poses for photos in front of the plaque that will be placed in John Tyler High School. (Photo by Shannon Wilson / Tyler Morning Telegraph)

The plaque that will be placed in John Tyler High School with Earl Campbell's jersey number on the scoreboard, 20 when he played for John Tyler and the University of Texas at Austin and 34 when he played professionally football for the Houston Oilers. (Shannon Wilson / Tyler Morning Telegraph)

The Tyler Rose returned to the halls where his fame first blossomed, full grown and still blown away by a school and city that set the stage for a Hall of Fame career.

Earl Campbell accepted his Hometown Hall of Famers plaque on the same John Tyler campus where 40 years earlier he starred for the Lions' 1973 state championship team.

The Pro Football Hall of Fame and Allstate Insurance Company partnered to create a program designed to pay homage to the hometown legacies of some of the most iconic names in pro football history starting in 2011.

The plaque pictures Campbell's face as displayed on his Hall of Fame bust, with his name below and "Tyler Hometown Hall of Famer" inscribed beneath his moniker.

The half-hour ceremony at the John Tyler varsity gymnasium featured a highlight reel and ended with Campbell taking the stage at the Lions Den, where those in attendance showed their appreciation by rising to their feet for multiple standing ovations.

"I had a dream," Campbell told the John Tyler students of hundreds on hand. "God gave me a talent. I wanted to be the best at what I did. I hope while you're young you think one day I'm going be like Earl Campbell and think, ‘What did I do with the gift God gave me?' I want you to know it's a pleasure to come back here."

John Tyler became the 67th high school in the country to be an extension of the Pro Football Hall of Fame.

"Take that as an inspiration, not just on the football playing field," said George Veras, Pro Football Hall o Fame president and CEO. "What got him there was community support. Take that lesson with you."

In addition to John Tyler receiving a plaque, the city of Tyler also received two commemorative Hall of Famer road signs to display in honor of the man credited with putting the Rose City on the map.

"He's the most famous Tylerite and John Tyler (student) ever," said Brad Brookshire, chairman of the board for Brookshire Grocery Co., who presented Campbell with the historic plaque.

"It's at this school his love and passion for football developed. You wouldn't believe how excited the city of Tyler was in 1973 — Earl was the hero."

After starring at John Tyler, Campbell transferred his stellar play to the next two levels, winning the Heisman Trophy at Texas in 1977 and, later, three Most Valuable Player awards in the NFL with the Houston Oilers. Campbell entered the Hall of Fame in 1991 after rushing for 9,407 career yards.

Campbell is one of only three men to win the Heisman Trophy, be taken with the first overall pick in the NFL draft, and be inducted into the Hall of Fame, and is believed to be the only first-year player named Rookie of the Year and Most Valuable Player in the same season.

"It's amazing," Campbell said of being a member the Pro Football Hall of Fame. "It's no doubt you're in a fraternity, to be recognized as one of the guys that was the best at what he did for a living, which was football, and to be able to sit down in Canton, Ohio."

When reminiscing about his John Tyler days, the famed runner throws out names such as mentor Lawrence LaCroix, an assistant on the Lions' championship team; former John Tyler coach Corky Nelson and teammates such as fullback Lynn King, quarterback Larry Hartsfield and others.

"The (year) we won the championship, our city was in a position to go back to the 60s or go forward," Campbell said. "Because of coach LaCroix and Corky Nelson and those guys, we won the state championship and that turned our whole city around."

The 1973 season saw Campbell rush for 2,036 yards and 28 touchdowns in the equivalent of 10 1/2 games. Campbell turned it on in the postseason in particular.

JT opened the playoffs with a 34-0 win over Plano at Rose Stadium, with Campbell rushing for 219 yards and three TDs. Campbell carried six players 14 yards downfield on a legendary run.

"I always said, even in high school, I wanted more than one guy to stop me," said Campbell, a three-time NFL rushing champion who is widely considered one of the most physical runners in the history of the game. "I wanted to get the max out of my ability and that's how I played."

Campbell scored the game-winning TD with 2:04 left as JT won 10-7 at No. 1 Conroe in the second round. Campbell continued his tear in the third round with 189 yards and four TDs, including scores of 73 and 65 yards, in a 34-12 win over Arlington Heights in Fort Worth. In a 22-7 win over Arlington Sam Houston in the state semifinals, Campbell scored on an 85-yard run in Waco.

Campbell capped the stellar year by stepping off 164 yards and two TDs in a 21-14 victory over Austin Reagan in the state championship game at the Houston Astrodome, including the game-winning score with 51 seconds left.

"It feels like just yesterday," said Campbell of the '73 season, in which he did everything from carrying the offensive load to blocking kicks, completing passes and making critical stops on the defensive side. "I talk to Lynn King a lot. It's amazing what football does, what winning does. It brought a bunch of friends together, guys like Michael Johnson and Tuffy Wilson."

Even while heading a successful business, Earl Campbell Meat Products, the Tyler Rose remembers the role his roots played in it all.

"I find myself every day of my life reading the Tyler Paper no matter where I go," Campbell said. "My wife (Reuna, a John Tyler graduate and former Majorette) tells me that I'm addicted to that paper.

"I keep up with John Tyler quite a bit. Me and my older brother, Willie, he's always calling me on Friday nights and he tells me everything about John Tyler."

Campbell credits Tyler for providing the launching pad to a career constantly being remembered locally and nationally from documentaries on the legend, to fields and streets in town bearing his name.

"I believe to this day because of our team, everything that happened was because I had a chance to go through the city of Tyler and I had a great family," Campbell said. "I accepted the fact that I wanted to be a great football player when I was a junior in high school, and that was right on John Tyler's campus."

“I pray that out of his glorious riches he may strengthen you with power through his Spirit in your inner being.”