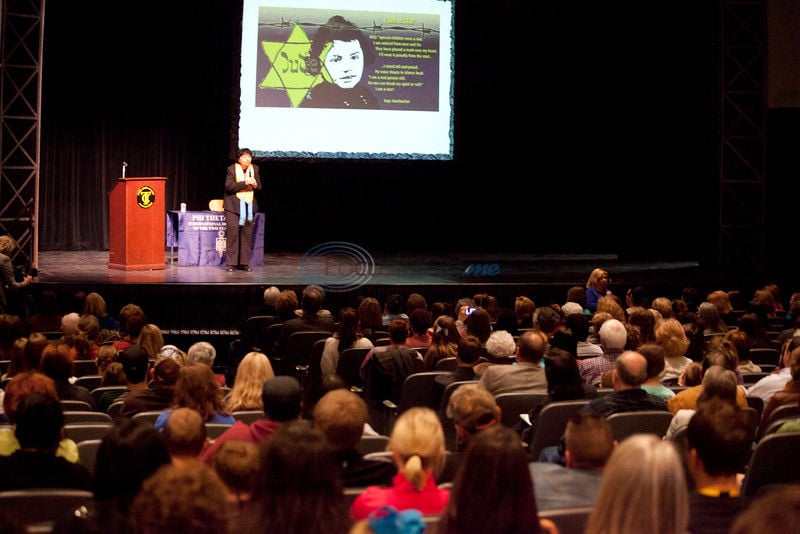 Photo by Haylee Bazil/Staff Photographer.On Tuesday November 25, Inge Auerbacher a child Holocaust survivor talks to audience about growing up as German Jew and surviving in the Terezin concentration camp in Germany at the Tyler Junior College Wise Auditorium. 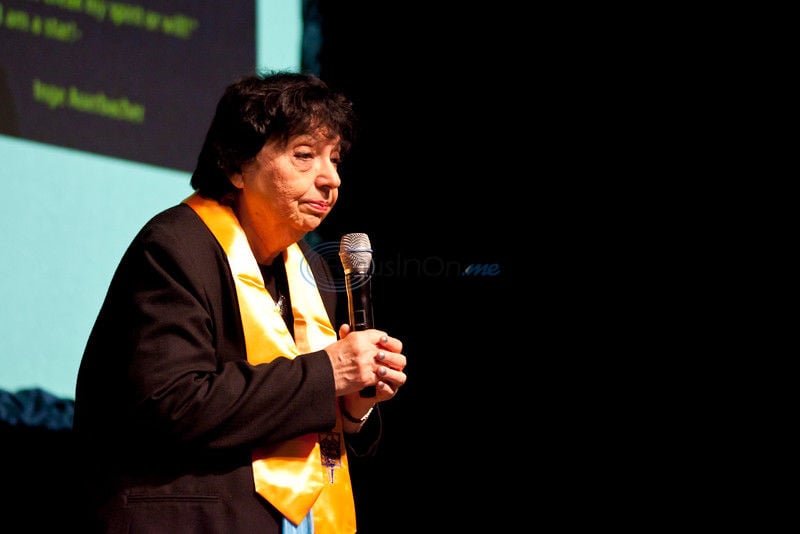 Photo by Haylee Bazil/Staff Photographer.Inge Auerbacher the only child survivor of the German Concentration Camp Terezin addresses audience about growing up as German and then being rejected by her homeland for being Jewish. 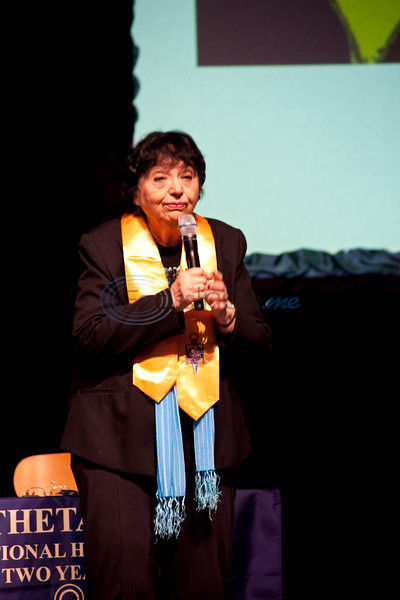 Photo by Haylee Bazil/Staff Photographer. Holocaust child survivor Inge Auerbacher, speaks to audience about growing up as German Jew and surviving in the Terezin concentration camp in Germany.

Photo by Haylee Bazil/Staff Photographer.On Tuesday November 25, Inge Auerbacher a child Holocaust survivor talks to audience about growing up as German Jew and surviving in the Terezin concentration camp in Germany at the Tyler Junior College Wise Auditorium.

Photo by Haylee Bazil/Staff Photographer.Inge Auerbacher the only child survivor of the German Concentration Camp Terezin addresses audience about growing up as German and then being rejected by her homeland for being Jewish.

Photo by Haylee Bazil/Staff Photographer. Holocaust child survivor Inge Auerbacher, speaks to audience about growing up as German Jew and surviving in the Terezin concentration camp in Germany.

A Holocaust survivor showed the yellow Star of David she was required to wear and recounted her concentration camp experiences during a speech at Tyler Junior College.

Eleven million innocent people were slaughtered during the Holocaust, Ms. Auerbacher said. Of those, six million were Jewish.

"Hitler had a special hatred against the Jewish people and wanted to kill every single one in Europe," she said.

The other five million killed, she said, were Jehovah Witnesses, gypsies, people with different sexual orientations, people with physical and mental problems, some Poles and anybody against Hitler.

"It's so important for the survivors to speak up and share their stories that this will never ever be forgotten," Ms. Auerbacher, 79, said. "I will talk about it as long as I can because when all the survivors are gone … and pretty soon, we all will be gone … then you have to read it in books."

Taking issue with people who have say the Holocaust never happened, she said it is pretty stupid, there were records of everything and hers is not a made-up story. She was among 15,000 children imprisoned in the Terezin concentration camp in Czechoslovakia, of whom about 1 percent survived.

Ms. Auerbacher was born in a village in southwestern Germany where she said 60 Jewish families lived peacefully among the town's approximately 2,000 population. "I was the last Jewish child to be born in that village," she said.

In an ironic twist, a Nazi soldier who was the only doctor in the village helped deliver her, but Ms. Auerbacher said he did terrible things later on. Saying her family was happy, she showed pictures of her making mud pies as a child and holding her doll, named Marlene, the only object she later brought out of the concentration camp.

"In 1938 everything changed. My whole life turned upside down," Ms. Auerbacher said. That was when the first riot occurred against the Jews, called the Night of the Broken Glass, when Jewish synagogues were burned.

Ms. Auerbacher, her mother and grandmother hid in a back yard shed. All Jewish men and boys over the age of 16, including her father and grandfather, were arrested and sent to the Dachau concentration camp, even though her father was a disabled decorated World War I veteran who fought in the German army.

Some returned home later, "broken down in heart and spirit," Ms. Auerbacher said. They had to wear a blue and white striped prison uniform and stand at attention in bitter cold. "If someone wanted to wipe his nose, they were hosed down with ice cold water. That happened to my father two times," she said.

When she was 6, she went on a train to a Jewish school. Everybody Jewish 6 years old or older had to wear the yellow Star of David. Jewish children were not allowed to go to school with Christian children. She went to school six months and did not finish first grade.

At the age of 7, she was the youngest person on a transport of about 1,200 people headed to a concentration camp. People just watched and stood by as the Jews were deported, Ms. Auerbacher said.

They thought they were going to a beautiful apartment, she said. The trip on a crowded train with very little food and water took two days. When they arrived in Czechoslovakia, they were told to drop everything except a bedroll and metal dish.

"We marched two miles into the camp; many people couldn't do that and they fell by the wayside," Ms. Auerbacher said. "When we were marching into the camp and they were whipping us, my parents put me between them that I should not be whipped … should not be hurt."

"Marching into the camp in broad daylight, people saw us and nobody cared — nobody," she said.

It actually was an army garrison town built in the late 18th century surrounded by thick walls with high barbed wire, and nobody could escape, Ms. Auerbacher said.

Between 1941 and 1945, approximately 140,000 people went through the camp. "Two-thirds were shipped to the killing center at Auschwitz, and close to a third died of malnutrition and disease," Ms. Auerbacher said.

"I remember seeing white sheets on the floor, and I looked underneath. There were bodies," she said. "People died like flies."

Soon after her arrival, a fever broke out among children.

"I got it almost immediately," she said. Two children were put in each bed, her partner was a baby, and she remembers the bed was always wet.

"There was a lot of vermin, lice and bedbugs; those were our companions," Ms. Auerbacher recalled. "We could take maybe two showers a year with permission. Hunger was always with us, constantly."

She spoke of many friends and relatives killed by the Nazis.

"I never stopped believing in God. I still have my faith," she said.

After the Russians liberated her and her parents, they went back to Germany and emigrated to the U.S. in 1946. Ms. Auerback became very sick and was put in a charity hospital for two years.

Finally at the age of 15, she was allowed to go to school, finished high school in two years and started college but became sick again. Ms. Auerback eventually received a doctor of humane letters degree from Long Island University. She is a retired chemist, having served 38 years in medical research and chemistry research. She is also the author of several books.