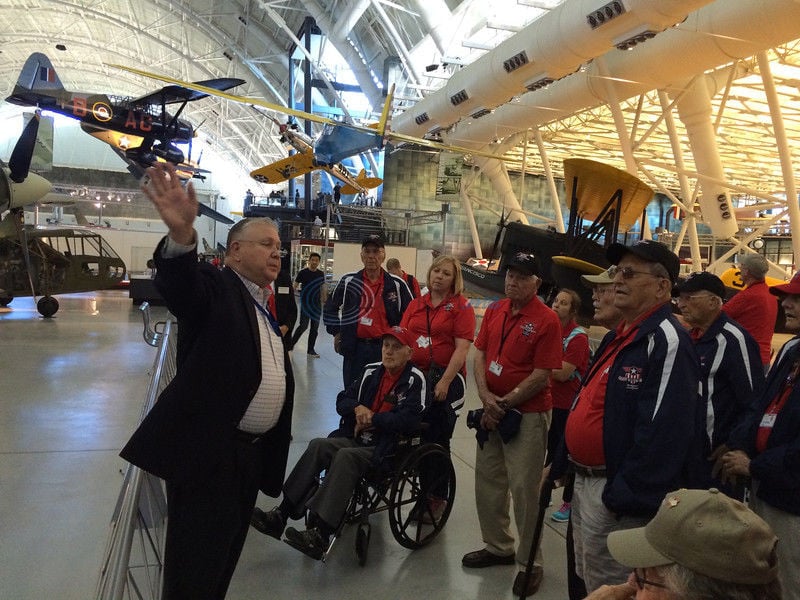 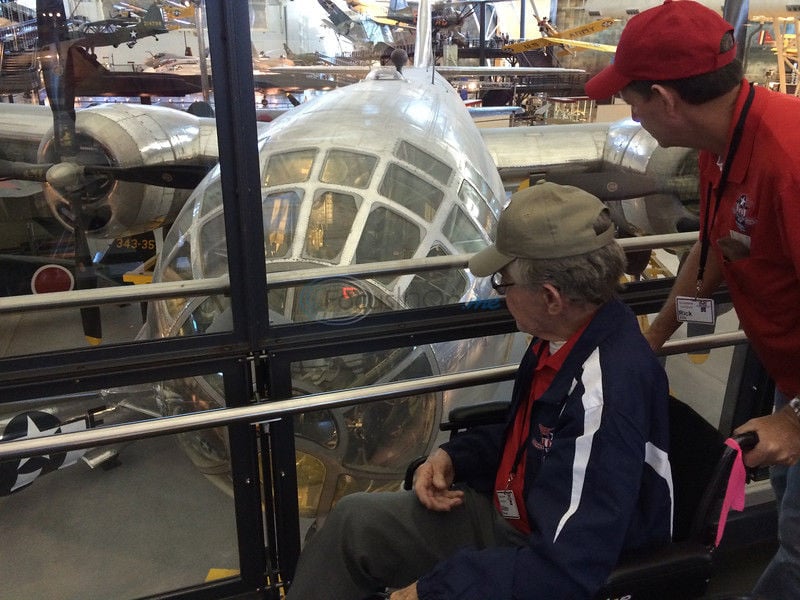 Dave BerryStaff Allen Brown, a Tyler Navy veteran who served on submarine chasers in the South Pacific, and Rick Ellis, Brookshire’s VP for Marketing, examine the B29 Enola Gay, the plane that dropped the atomic bomb on Hiroshima and speeded the surrender of Japan. The National Air and Space Museum was the final stop on the Brookshire’s/ Super 1 Foods Heroes Flight. 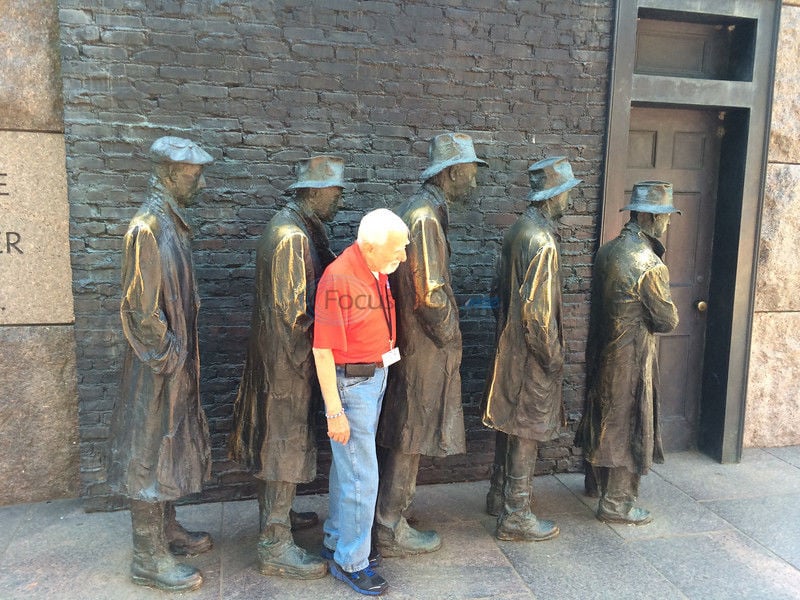 Dave Berry/Staff Ben Weber, an Army veteran from Pollok, clowns around standing in the unemployment line at the FDR Memorial.

Dave BerryStaff Allen Brown, a Tyler Navy veteran who served on submarine chasers in the South Pacific, and Rick Ellis, Brookshire’s VP for Marketing, examine the B29 Enola Gay, the plane that dropped the atomic bomb on Hiroshima and speeded the surrender of Japan. The National Air and Space Museum was the final stop on the Brookshire’s/ Super 1 Foods Heroes Flight.

Dave Berry/Staff Ben Weber, an Army veteran from Pollok, clowns around standing in the unemployment line at the FDR Memorial.

Twenty-six weary but exuberant veterans of the Second World War returned Saturday evening from a three-day whirlwind tour of the nation's capital, compliments of the Brookshire Grocery Co.

The Brookshire's/Super 1 Foods WWII Heroes Flight was the eighth such flight undertaken in the past four years by the company. More than 200 East Texas and Louisiana veterans have been escorted on Heroes Flights — free of charge — to Washington, D.C., to see the World War II Memorial and others historic sites.

The veterans on this trip were a mix of Texans and Louisiana residents. One group of 12 flew on from Dallas-Fort Worth International Airport to Shreveport. Another 14 East Texans flew in to Tyler Pounds Regional Airport, where they were met by an enthusiastic group of family members and flag-waving supporters welcoming them home.

The final day in Washington was almost as full as the previous two. After a quick stop at the FDR Memorial, the busload of veterans headed for the Smithsonian National Air and Space Museum at Dulles International Airport.

There, they saw historic planes, such as the Enola Gay that dropped the atomic bomb on Hiroshima and helped bring their war to an end. They walked around and under the Space Shuttle Discovery. And they saw an IMAX presentation about the D-Day invasion at Normandy, the 70th anniversary of which is coming up Friday.

To a man, the veterans said the Heroes Flight was a "trip of a lifetime," and something they could not have done on their own. Sam Anderson, Brookshire's community involvement manager, returned the salute by saying the 26 men had been "a delightful group to be with" and that he gets a special thrill out of escorting World War II vets to "your memorial."

The fight began early Thursday morning with a 4:30 check-in at Tyler Pounds Regional Airport. Another group flew from Shreveport to DFW, where the groups merged for the trip to the nation's capital. A group of "guardians" — Brookshire's employees and other volunteers — accompanied the group to tend to their every need.

Thursday afternoon, veterans toured the Navy Museum before going through security checks and receiving a three-hour personal guided tour of the Capitol Building. The tour was led by Congressman Louie Gohmert, who praised the veterans for doing what had to be done and answering their nation's call when the future of the world hung in the balance.

Friday began with the "Changing of the Guard" at the Tomb of the Unknowns in Arlington National Cemetery, followed by a special "just for the veterans on-the-bus" lecture by one of the 3rd Army's elite tomb sentinels.

From there, the group stopped at the Marine Memorial before heading back across the Potomac to the National Mall, where they visited memorials to World War II, the Korean War, Lincoln and the Vietnam War.

The site the veterans most wanted to see was the World War II Memorial, where they posed for pictures, had lunch in the shade of the trees and enjoyed the attention of an endless string of tourists and school children, who filed by to shake their hands and murmur a polite "thank you for your service."

Back on the bus, the group took in the Air Force Memorial, then enjoyed a meal, entertainment and dancing (if they wanted) at the Arlington Knights of Columbus Hall.

By the tour's end, the group was tired, excited by what they had seen and ready to head home to their families to share what they had seen. They had made new friends, seen things they thought they would never experience and teared up as they humbly accepted the applause of the crowds at every memorial and airport along the way.

The smiles were broad as the Texas veterans emerged from the plane and walked into the waiting arms of their loved ones. Some still clutched bulging Manila envelopes full of letters written specifically for each of them by school children back home.

The Heroes Flight had given them something they would never forget.

Dave Berry is editor of the Tyler Paper. An escort on this trip, he has now accompanied four Heroes Flights. His wrap-up story on the trip will appear in next Sunday's Tyler Paper.