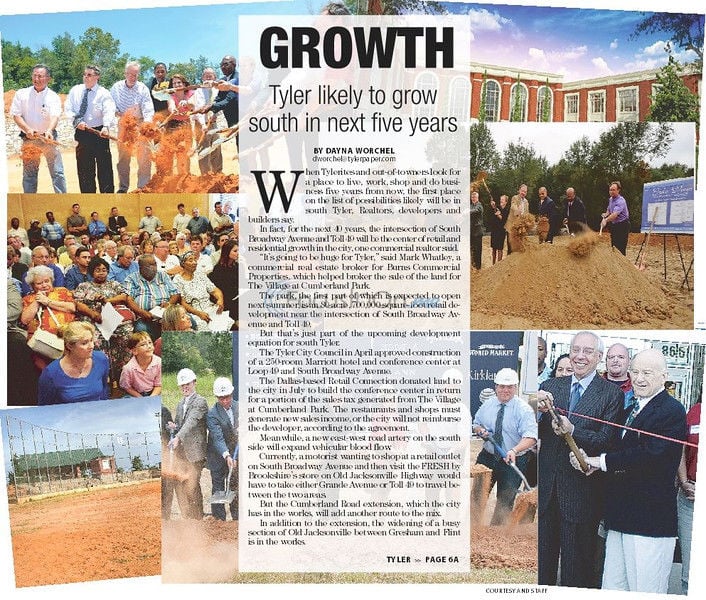 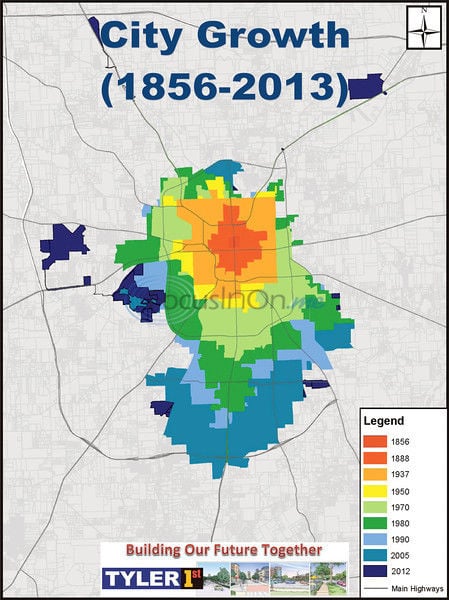 When Tylerites and out-of-towners look for a place to live, work, shop and do business five years from now, the first place on the list of possibilities likely will be in south Tyler, Realtors, developers and builders say.

In fact, for the next 40 years, the intersection of South Broadway Avenue and Toll 49 will be the center of retail and residential growth in the city, one commercial realtor said.

"It's going to be huge for Tyler," said Mark Whatley, a commercial real estate broker for Burns Commercial Properties, which helped broker the sale of the land for The Village at Cumberland Park.

The park, the first part of which is expected to open next summer, is an 80-acre, 700,000-square-foot retail development near the intersection of South Broadway Avenue and Toll 49.

But that's just part of the upcoming development equation for south Tyler.

The Tyler City Council in April approved construction of a 250-room Marriott hotel and conference center at Loop 49 and South Broadway Avenue.

The Dallas-based Retail Connection donated land to the city in July to build the conference center in return for a portion of the sales tax generated from The Village at Cumberland Park. The restaurants and shops must generate new sales income, or the city will not reimburse the developer, according to the agreement.

Meanwhile, a new east-west road artery on the south side will expand vehicular blood flow.

Currently, a motorist wanting to shop at a retail outlet on South Broadway Avenue and then visit the FRESH by Brookshire's store on Old Jacksonville Highway would have to take either Grande Avenue or Toll 49 to travel between the two areas.

But the Cumberland Road extension, which the city has in the works, will add another route to the mix.

In addition to the extension, the widening of a busy section of Old Jacksonville between Gresham and Flint is in the works.

"When developers come to town, they all know they can branch out there on south Broadway," Whatley said.

Oh, and don't forget the new middle school that the Tyler school district is building near FRESH.

Whatley said more businesses and offices are building or relocating to the south side, making it convenient for the employees who live in that area.

For example, Merrill Lynch relocated its offices to the 6000 block of Old Jacksonville Highway several years ago from the downtown area.

"The people who work there love it because most of them live out there," he said. And there will be continued residential development in Flint and Gresham, he added.

The city's expansion to the south began with the purchase of a large tract of land there in the 1990s. It was developer Bob Garrett's company, Broadway South Development, which made the decision to buy that land then. "We got zoning, access and signage from U.S. Highway 69 south and put in utilities," Garrett said.

The company also sold 80 acres to The Retail Connection, which is developing The Village at Cumberland Park.

But he is careful to say that growth to the south doesn't exclude growth in other parts of the city, such as the north side.

Garrett said now that Toll 49 is connected to Interstate 20, more shopping centers and growth could be coming to the north side of Tyler. "You have connected everyone in south Tyler and in southern Smith County with the completion of Toll 49," he said.

It's that toll road that also will make all of the difference with that commuter time from I-20 to the south side of the city, Whatley said.

"If you're coming from Van on I-20 to see a movie at the Carmike Cinema on south Broadway, you would have gotten on Loop 323 and gone through all of the stop signs to get to the movie theater," he said. "But now, if you use the toll way, you are saving 20 minutes off of that commute time."

Most Realtors, developers and builders say that the completion of the Cumberland Road extension will contribute to that south side growth by adding another east-west corridor to the city. And city of Tyler officials agree.

"This extension will provide for growth and development along Cumberland just like it has with Earl Campbell Parkway," City Engineer Carter Delleney said. It also provides for faster response times for police officers and firefighters, he said.

A police substation is coming on the south side of Cumberland Road near Faulkner Park, and it should be finished at the same time as the Cumberland Road extension, Delleney said.

Residents have said in the Tyler 1st Comprehensive Plan surveys that having more east-west routes in the city is important, said Heather Nick, city planner.

"Once the extension is complete, people can drive from south Broadway to Old Jacksonville on the Cumberland Road extension," Ms. Nick said.

A small piece of Cumberland Road already exists from Broadway Avenue to the western edge of Faulkner Park, she said. Once it is completed, Cumberland Road will extend to Old Jacksonville with a four-lane divided road with sidewalks and medians, similar to Earl Campbell Parkway. Cumberland Road will have landscaping and a large bridge to go over West Mud Creek, along with a center turn lane.

"We haven't started construction yet — but 80 percent of the design is done," Delleney said. "We will have all new road between Blue Mountain to Faulkner Park."

There will be advantages for Fire Station No. 9 on Paluxy Drive, which will help with response times, Carter said.

"Estimated costs for the construction are $17 million, which will come from the city's Half-Cent sales tax fund," Carter said.

Construction on the extension could begin in the summer 2014 and be finished in summer 2016, Carter said.

"We are anticipating putting in two miles of hike and bike trails to connect Faulkner Park to the trail along Grande Boulevard," he said.

On the north side of Tyler, the synergy of I-20 comes into play, Garrett said. He pointed to the retail growth of Lindale along that interstate, with the restaurants and Lowe's Hardware.

"Lindale Independent School District is an award – winning school district and people want to live there because of that," Garrett said.

He added that Tyler is the largest retail center between Shreveport and Dallas.

The city has taken steps to move this growth on the north side forward — with the annexation of a portion of U.S. Highway 69 North, and an area around the Tyler Pounds Regional Airport, Ms. Nick and Delleney said.

These areas are included in the city's priority annexation areas. They pointed to examples that included the 92-unit Saige Meadows multi-family development at the corner U.S. 69 and James Fair Parkway, and Ed Thompson's North Chase Development.

Thompson, who also sits on the city's Affordable Housing Committee, began to invest in the future of the north end in 2010 with the building of the 140 unit Lakeview complex on 18 acres for residents ages 55 or older. The city of Tyler spent $1.8 million to put in water and sewer infrastructure in 2011.

That complex, on North Broadway Avenue at Loop 323, along with the construction of the 140-unit Pinnacle at North Chase, an affordable housing complex for residents of all ages, followed shortly afterward. The Pinnacle is across the street from the Lakeview complex.

The acreage — including the Pinnacle apartment complex development, the senior citizen's development of Lakeview and the Forest Meadows townhomes and detached home development totals 405 acres. There were 370 acres left to develop, Thompson said in June. He is planning for a multi-use retail development to include restaurants and stores near those housing developments.

District 6 Councilman John Nix, owner of Nix Construction, said he believes that south Tyler's growth will continue to be strong.

"We are seeing a change in our products with higher quality, smaller footprint and rental housing being the big demand," Nix said. "I think that as Tyler's developments take shape in the south, we are going to see a continued focus on access to medical services (three local hospitals have a presence in south Tyler), shopping, eating, and outdoor activities. With these trends we expect to see strong growth in housing and service industries in south Tyler."

His company built 40 rental units in the city last year, he said.

He sees south Tyler as a place where people can eat, shop and experience entertainment without getting in their cars. And south Tyler is becoming like that with the Cumberland Road extension, the shopping and development he said.

Kris McGeary, a residential Realtor who works for Coldwell Banker, said she believed several factors are contributing to the growth in South Tyler.

"We have new retail moving into South Tyler, our public schools are going through positive and expansive changes, and the cost of living is still fairly low," she said.

She said she sees a lot of people leasing in south Tyler, but mostly it is people new to the area who are renting while they wait for their home to sell elsewhere.

Garrett said he didn't want to speculate on where the center of Tyler might be some day, with all of the growth happening in the south.

City officials said the intersection of Broadway and Loop 323 is considered to be the geographic center of town. He pointed to the Dallas-Fort Worth metroplex as an example of continued growth.

"It's a solid town from the Red River to Midlothian. I can see down these major arterial corridors going south, such as I-35," he said.

I-20 also is a huge factor in that development, he said. And Dallas County is made up almost entirely of all of the city of Dallas, Garrett said.

Although the growth to the south is strong and steady, the city's growth is limited to a five-mile extra territorial jurisdiction, Ms. Nick said, because of its population of 100,000.

"Bullard and Whitehouse and Noonday to the south each have their own ETJ, and so does Lindale — the city doesn't do involuntary annexations," she said.

A years-long territory dispute between Tyler and Lindale came to an end in June 2011 after both communities agreed to define boundaries near the interstate so both communities could develop.

As Tyler and Lindale experienced booming growth in recent years, their boundaries started butting into one another and overlapping, officials said.

The new agreement resolved that issue for the next several years. Mayors of both cities said earlier they were satisfied with the arrangement.

"Mayor (Barbara) Bass, City Council and the city of Lindale came to an agreement about where cities would meet instead of fighting," Garrett said.