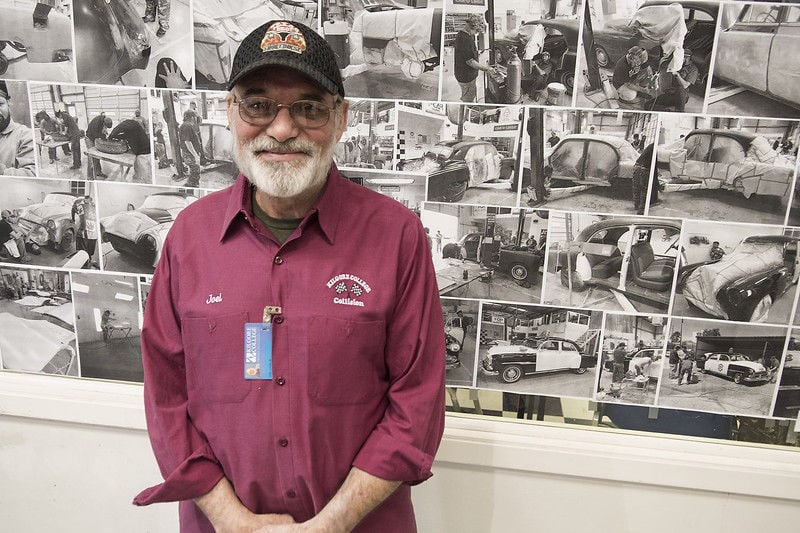 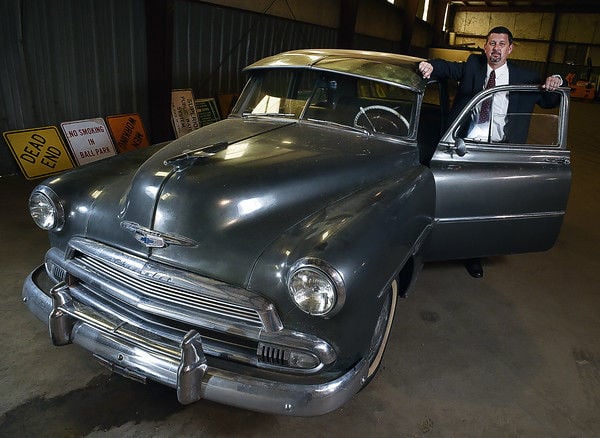 Police Chief Robert Vine poses with a 1951 Chevrolet Deluxe in late July at a city warehouse in Gladewater. Students in the auto body program at Kilgore College helped restore the car to resemble a period police patrol vehicle for the Gladewater department. File photo by Andrew D. Brosig/Tyler Morning Telegraph 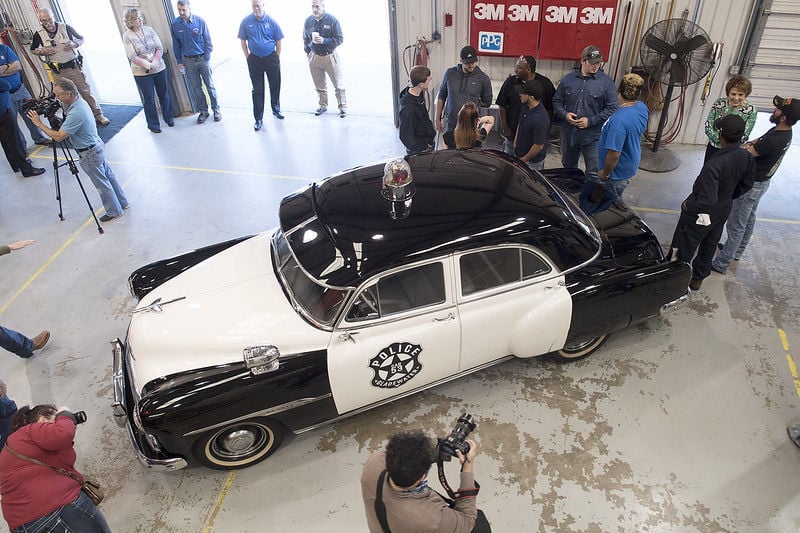 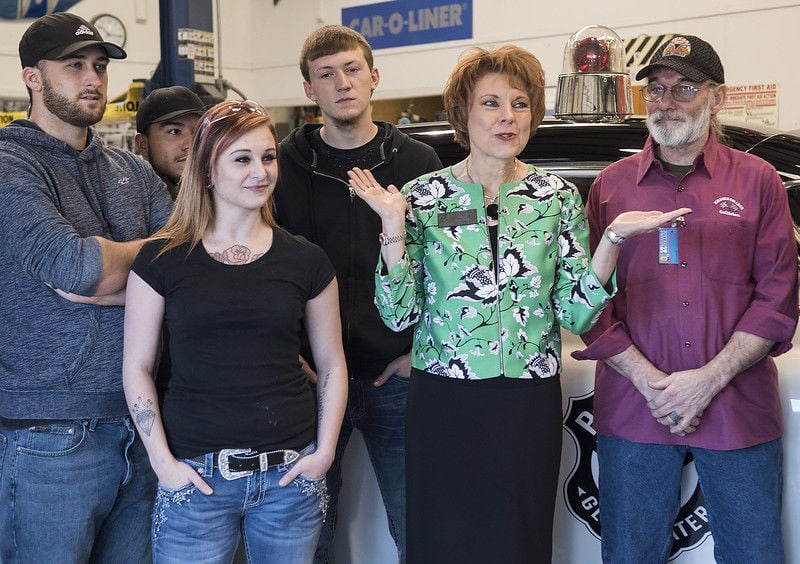 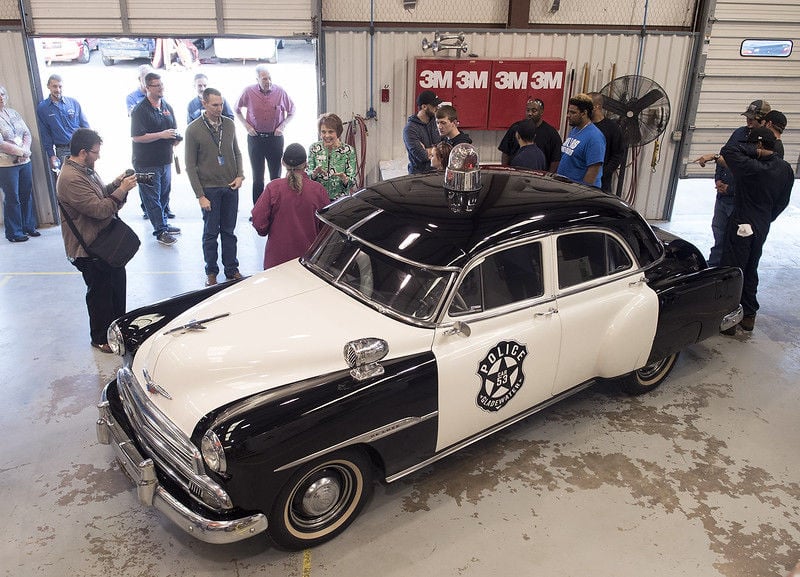 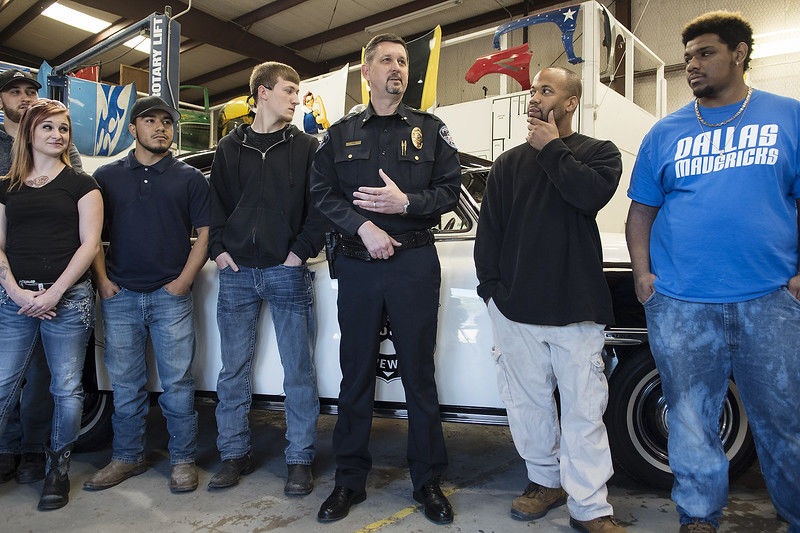 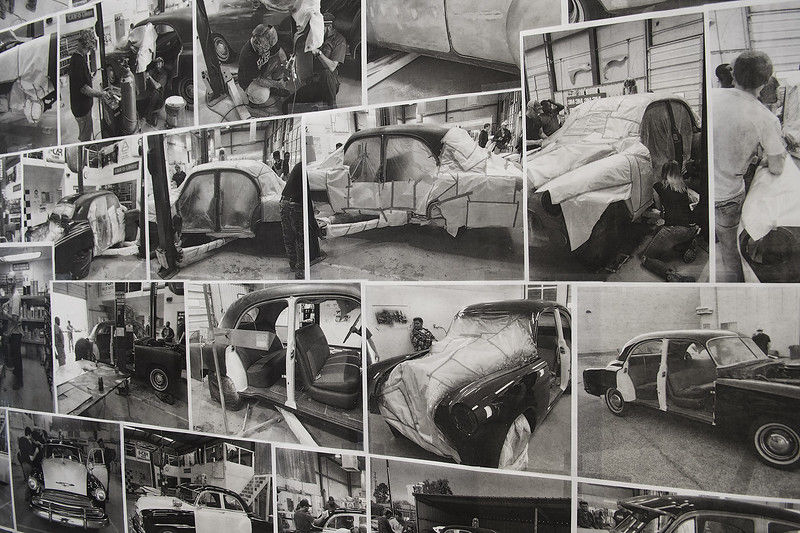 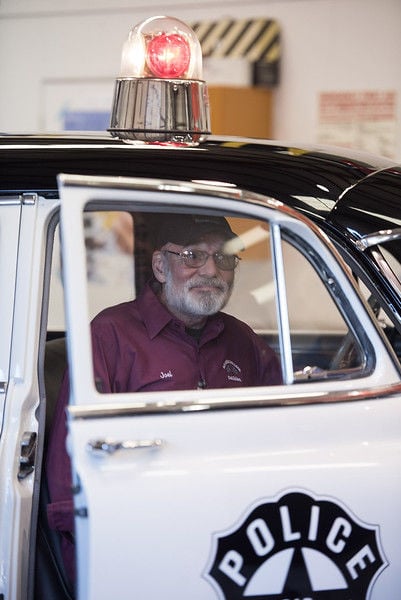 Police Chief Robert Vine poses with a 1951 Chevrolet Deluxe in late July at a city warehouse in Gladewater. Students in the auto body program at Kilgore College helped restore the car to resemble a period police patrol vehicle for the Gladewater department. File photo by Andrew D. Brosig/Tyler Morning Telegraph

KILGORE – Police in Gladewater are breaking in a rookie and heads are turning.

The department's newbie isn't a traditional cop, but a classic car that's been converted from family cruiser to finely tuned crime fighter.

"It's definitely going to be a great thing for the community," the chief said Friday morning shortly after unveiling his newest department member - a four-door, mostly original 1951 Chevy Deluxe, dubbed Unit 53.

The union between car and this unique car isn't a coincidence.

It's the result of a public/private partnership between police and Kilgore College's auto body department, headed by instructor Joel Laws.

A SEARCH KICKS OFF

The journey to transform Unit 53 was years in the making.

Vine is an admitted classic car guy who believes some well-designed vintage rides can outperform their modern counterparts.

He had a long-held dream of converting an old-school ride into a working police vehicle, and for fun started tossing around the idea within the community.

It apparently wasn't a difficult project to sell, given the fact that Gladewater is the known as the Antiques Capital of East Texas.

So when a chance encounter unfolded one day with Kilgore College President Dr. Brenda Kays, Vine peeled off his idea and posed a key question.

"He said, ‘Is that something the college could possibly help us with?" she said, recalling their conversation.

The answer was a resounding "yes," given the learning potential and opportunity to collaborate with a community partner, she said.

Kilgore College wasn't the only entity to buy into the project.

The police department's dream project received an outpouring of support from the community.

McKaig Chevrolet Buick and private donors stepped up, giving cops the green light and about $11,000 to pull off their grand plan.

"We thought it was a good idea," said Mark Abernathy, of McKaig Chevrolet.  "It made since to us, since Gladewater is the antiques capital of East Texas."

Police said the goal was to locate an early mid-century era vehicle that was long on comfort and short on issues.

The chief said everyone knew it could take time to locate a car that was serious enough to wear a badge, yet fun enough to draw a crowd.

It had to be functional, not just eye candy, and solid.

A possibility popped on the radar in Missouri - a reasonably priced monster of a car with smooth lines, pristine interior, a solid engine and a body with ample amounts of gleaming chrome.

After a little negotiating, Unit 53 started on its journey to its new home in Gladewater … with a slight detour to Kilgore.

AT THE BODY SHOP

Laws, a veteran paint and body expert, and an eager collection of student volunteers are credited with pulling off the project, gratis.

In a matter of months, they transformed a faded gray-green family car into a racy, black and white squad.

There were plenty of headaches, it seems, primarily involving rust.

But Laws, a veteran auto body expert and owner of Laws Collision, knew the opportunity to overhaul a classic ride in great condition doesn't knock twice.

"It was a pain …" said Kal Metcalf, 19, of Shelbyville, with a grin. "We had to make sure it was perfect. He's (Laws) going to teach you the right way and is the kind of teacher you need."

It took months to complete the project, due largely to semester schedules, but in the end, the results speak for themselves in the snazzy cruiser with a wailing siren and bubble strobe light.

"It looks good," Laws said. "I'm happy with it. Seeing the light come on is the cool thing."

For the students who toiled to bring the project to fruition, watching police take possession of their semester-long project seemed bittersweet.

"It makes you feel good on the inside," said auto body student Rossinex Jackson, 34, of Longview, watching Unit 53 pull away, headed home to Gladewater. "I might even go to Gladewater to see it."

"It's a great feeling," he said, noting the difficult hours were well worth it. "Joel is one of the most knowledgeable people in this line of work."

Even Gladewater's mayor seems giddy over the results, even though Unit 53 may never see a high-speed pursuit.

"Oh yes, I think other places will be jealous," teased Mayor Harold Wells. "I think other towns are going to copy us."

For police, it's simply a dream come true.

"When I envisioned what it would look like, this is it," the chief said.