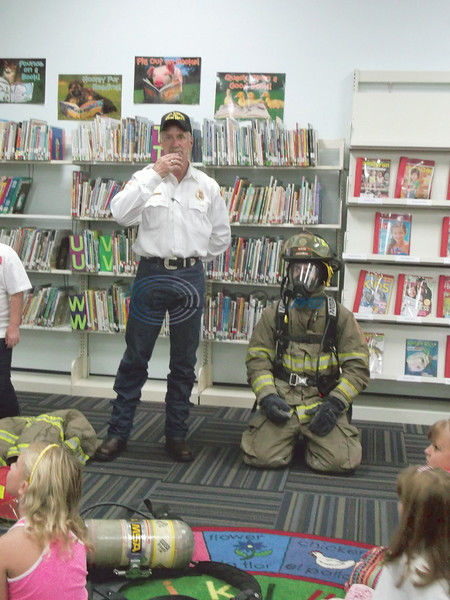 Betty Waters/Staff Rick Farner, (left) founder of the HUG a Firefighter safety program, and firefighter Justin Farmer, dressed in his firefighting garb, teach children how to save themselves in a fire emergency. The lesson was part of the summer reading program at Palestine Public Library. 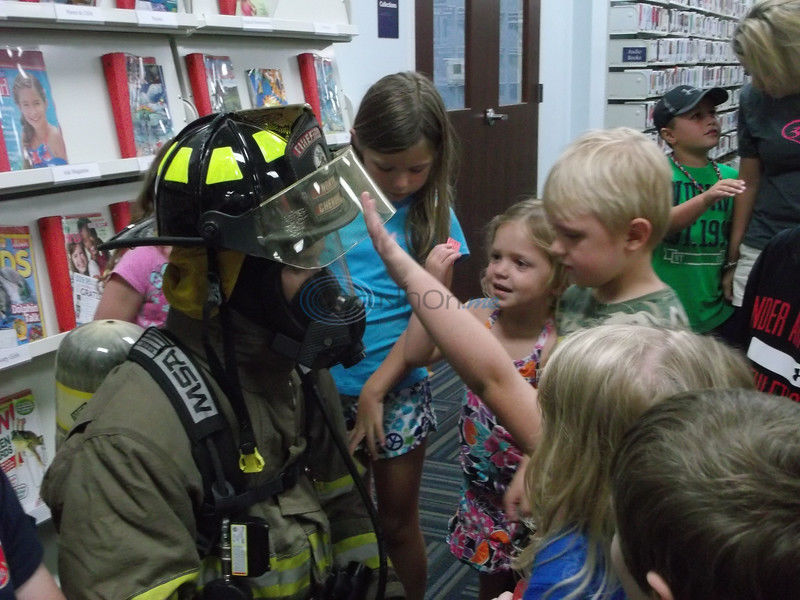 Herb Nygren Jr./Staff Children crowd around firefighter Justin Farmer to touch his gear and overcome their fear of the sight of firefighters during a presentation of the HUG a firefighter safety program during Palestine Public Library’s summer reading program.

Betty Waters/Staff Rick Farner, (left) founder of the HUG a Firefighter safety program, and firefighter Justin Farmer, dressed in his firefighting garb, teach children how to save themselves in a fire emergency. The lesson was part of the summer reading program at Palestine Public Library.

Herb Nygren Jr./Staff Children crowd around firefighter Justin Farmer to touch his gear and overcome their fear of the sight of firefighters during a presentation of the HUG a firefighter safety program during Palestine Public Library’s summer reading program.

Wearing an air tank, mask and other gear, a firefighter in full uniform may look like a "space man" or a "monster" in the eyes of young children, firefighter Rick Farmer said.

The sight of a fully-suited firefighter often scares children and causes them to hide, perhaps in a closet or clothes hamper, during a fire when they should run to the firefighter, Farmer, founder of HUG a Firefighter, said.

"If they hide and that house is burning, it's going to take me a long time to find them," Farmer, captain of North Cherokee Volunteer Fire Department, said.

With that in mind, Farmer conceived the "HUG a Firefighter" safety program that he and other firefighters present upon request in schools, day care facilities, churches, libraries, even home schools.

They have given the program in Tyler, Jacksonville, Overton, Arp and other places in East Texas, most recently to children participating in the Palestine Public Library's summer reading program.

HUG is an acronym for "Hurry Up Grab a Firefighter."

"What we are doing is we are suiting up in front of children and letting them come touch us," Farmer said. Some children become so frightened that they cry.

"In just about ever class we've done so far, there's been kids in there that were just terrified," Farmer said.

When that happens, he said, "I make my firefighters undress to regular clothes. Then they will slowly suit back up." Firefighters let scared children help them put their suit on by handing them a mask, helmet, gloves and other gear.

"When they participate, they are not as scared," Farmer said. "If we have a child that's real scared, we do one-on-one with that child until the child is not scared anymore."

The purpose of the presentation, Farmer explained, is to get children to the point that they will run to a firefighter in the event of a fire rather than become frightened at the sight of a firefighter and hide.

When firefighters arrive at a house fire, Farmer said, the first thing they do is go around the house to make a perimeter check.

"If we see a kid in a window, if he would stay at the window, we could go to the window and get him out, but that's usually not what happens. They don't know us and we have fire suits on. We start to go to that window and they take off," Farmer said.

One lesson firefighters in the HUG a Firefighter program teach children is to go to a window if they cannot get out through a door.

Because a burning house will be "blacked out with smoke," a standard procedure for firefighters is to crawl through the house staying against the wall to feel their way as they search for people, Farmer said.

"We teach kids not to hide. We are teaching these kids to close their door, put something at the bottom of the door to block the smoke, go to the window and scream," Farmer said.

Children will probably see a firefighter before the firefighter sees them, Farmer said. "If it was pitch black, the house on fire, you are already scared and I come around the house suited and looking like a space man, they are going to run. We want them if they see us, to come to us," he said.

During a presentation, the firefighters simulate a full rescue to show children how they want them to come to firefighters in a fire, but the main part of the program consists of firefighters suiting up and letting small children come close and get over their fear.

"I want it to be reality, this is what it really looks like. I want them to see exactly what happens," Farmer said.

"We want to do this (give the presentation) every year continuously. It's going to get bigger and bigger. We just want this to spread. We are trying to go nationwide with this," Farmer said.

Most fire departments do an excellent job of going into schools and teaching the standard lesson that if a person catches on fire, they should stop, drop and roll, Farmer said. But he has not heard of another department teaching what the HUG a Firefighter program teaches children to do in the event their house catches fire.

He has received enquiries from other fire departments as far away as Australia and Dublin, Ireland, asking how they could get the program.

The HUG a Firefighter program is being set up as a 501c3 nonprofit organization with a 12-member board.

"It's growing real fast. We want to make sure we do everything right so we can make sure everything gets established on a solid foundation so it can spread," Farmer said.

Farmer hopes that the program will eventually be able to pay for dogs that are trained to work with fire departments to find live people. "We are trying to raise the money; we are trying to get a dog grant program set up," he said.

Another project in the mill is development of "safe signs" for distribution at schools and to the public.

One sign can be posted by the door of a house, Farmer said, to tell firefighters how many family members there are, how many are children and if someone in the house takes oxygen which could explode in a fire.

"We (firefighters) know what we are looking for when we pull up at a house in a fire truck and see the sign," Farmer said.

All families ought to have a designated safe spot where they gather in the event of a fire, Farmer advised.

To raise funds to support the HUG a Firefighter program, a trap shoot is being planned in early to mid-September at the Prairie Creek Shooting Range on Texas Highway 155 near Interstate 20.

The HUG a Firefighter program needs volunteers, Farmer said. It is mandatory that volunteers undergo a background check. Persons interesting in volunteering can reach Farmer at 903-258-4256 or at www.hugafirefighterllc.org.