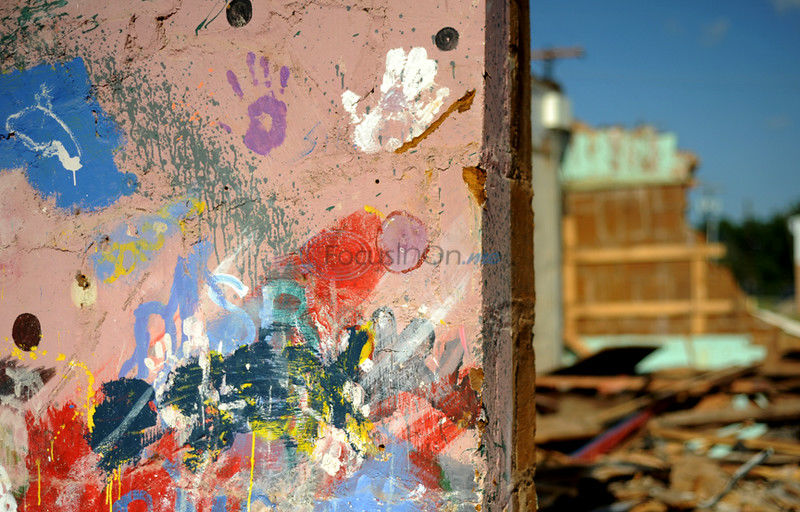 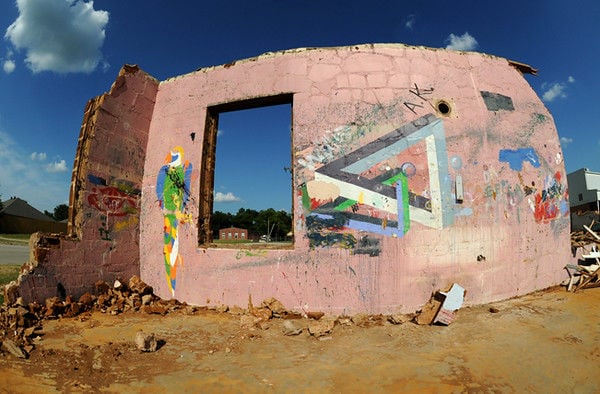 An old building outside of Bullard Intermediate School, affectionately referred to as the "Alamo," is in the process of being torn down after serving as an agricultural education building, an art/band facility and as a storage/maintenance area. The building has stood since the 1930s, when it was built by the Works Progress Association. The bulding is being torn down to accomodate wider lanes to ease congestion during pickups and dropoffs. (Victor Texcucano/Staff) 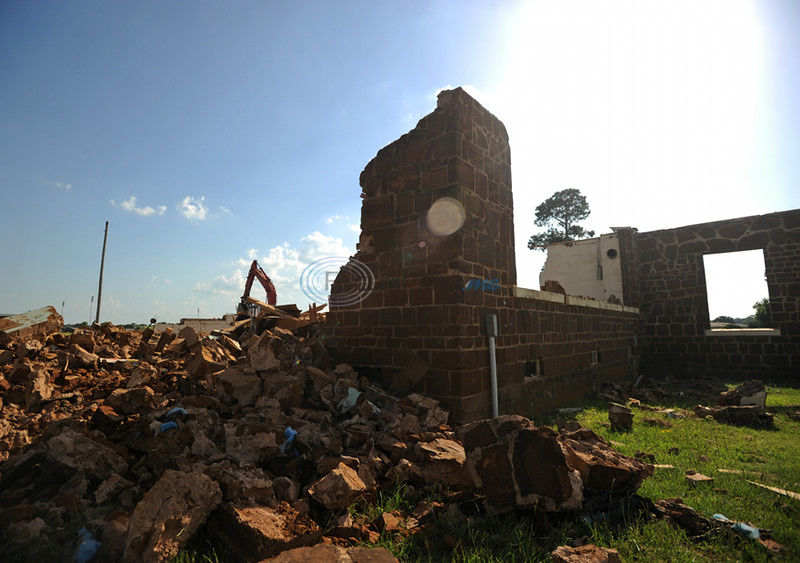 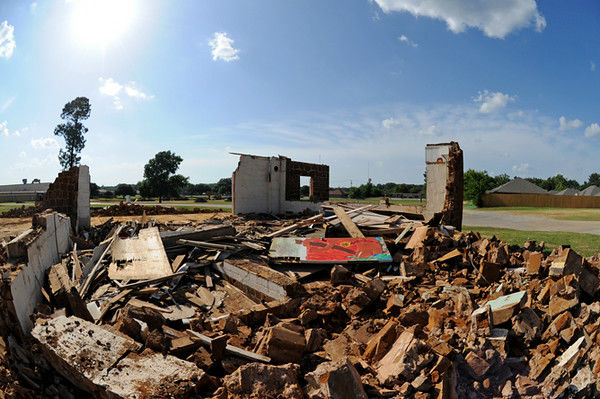 A colorfully-painted door sits among the rubble of the building. (Victor Texcucano/Staff) 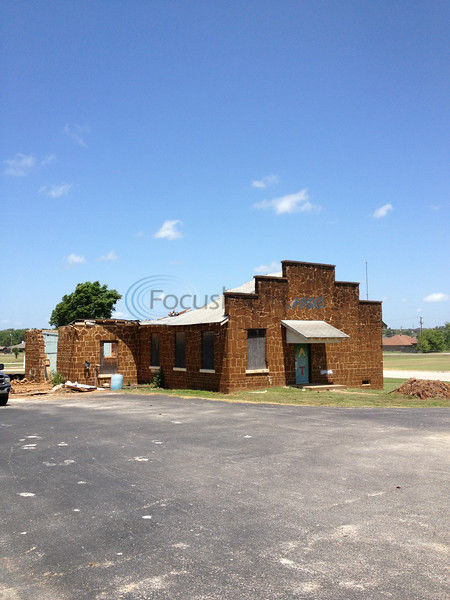 An old building outside of Bullard Intermediate School, affectionately referred to as the "Alamo," is in the process of being torn down after serving as an agricultural education building, an art/band facility and as a storage/maintenance area. The building has stood since the 1930s, when it was built by the Works Progress Association. The bulding is being torn down to accomodate wider lanes to ease congestion during pickups and dropoffs. (Victor Texcucano/Staff)

A colorfully-painted door sits among the rubble of the building. (Victor Texcucano/Staff)

BULLARD — A building resembling a key Texas battleground made its last stand.

The building — affectionately known as "The Alamo" to generations of Bullard residents — was torn down last week after years of neglect to make way for roads that will relieve traffic congestion during pick-up and drop-off times at Bullard Intermediate School.

The building was constructed in the mid-1930s as part of President Franklin D. Roosevelt's Works Progress Administration, which sought to give jobs to struggling workers during the Great Depression, said Charles Ray, a longtime Bullard resident and retired science teacher.

Ray said it was built of sandstone with bits of iron ore inside.

"They quarried the rock just south of Teaselville in County Line Creek on (Farm-to-Market Road) 346. … (They) quarried some of the rock there and some east of Bullard," he said.

Ray said his father worked on a similar project as part of the National Youth Administration to construct a bus shed at 16. He helped quarry some of the rock, which was cut using an old-fashioned two-man saw.

Ray, a 1968 Bullard ISD graduate, said the building served as the Ag shop for decades.

"It's been a multitude of things," he said. "It was maintenance building; after that, it was a bus barn. … It served a lot of different things."

The Alamo housed art classes and beginner's band for several years as well.

"I remember doing art over there in middle school," Trisha DeMoss, of Lubbock, said on Facebook. "I developed some of my best friendships during those hours of art class."

Dana Popkie, of Tyler, said it was a place for antics as well.

"We used to sit on the old propane heater in the wintertime and see who could stay on the longest before burning our butts," she said via Facebook. "Making (the band director) mad during band was a daily activity in the Alamo."

It was where Samantha Almeida, of Bullard, watched the second plane hit the twin towers on Sept. 11, 2001.

Bullard ISD Superintendent Keith Bryant said the building was on the chopping block for a long time because of its neglected state.

Board officials approved a master traffic plan in 2011, and the final piece involves taking down the building to expand travel ways to the intermediate school. It will create two drop-off areas for students and help alleviate traffic on Schoolhouse Road and Farm-to-Market Road 344. The new route is expected to be functional by the beginning of the school year and be finished by the end of September, Bryant said.

Bryant said removing the building was a difficult decision to make.

"We did talk to contractor about bringing it up to code," he said. "The estimate (was) about $450,000. It was infested with termites, the exterior block was cracked (and the) roof was in poor shape."

Bryant said he could not say for sure when the building held its last class, but it served as a storage unit when he arrived in 2008, and its condition continually worsened.

"When you leave a building unoccupied, it will rundown over time, and it will become too much of a money pit to do anything with," he said.

The district will finish taking down the structure this week, but residents are invited to take the sandstone as a memento or for a project.

The city and district are also proposing two projects to memorialize the building.

Dr. John Alexander, Place 3 school board member, and some residents will present a proposal to the board on July 21 on a memorial project about the Alamo and other WPA projects completed in the city. If approved, it would rest somewhere on the Alamo's foundation.

"They did more work than just that building," he said. "WPA efforts benefited (both) the school district and Bullard."

"We're looking for a way to acknowledge the history of the building that means so much to the people who live in Bullard and all those who went to school in Bullard all their lives," she said.