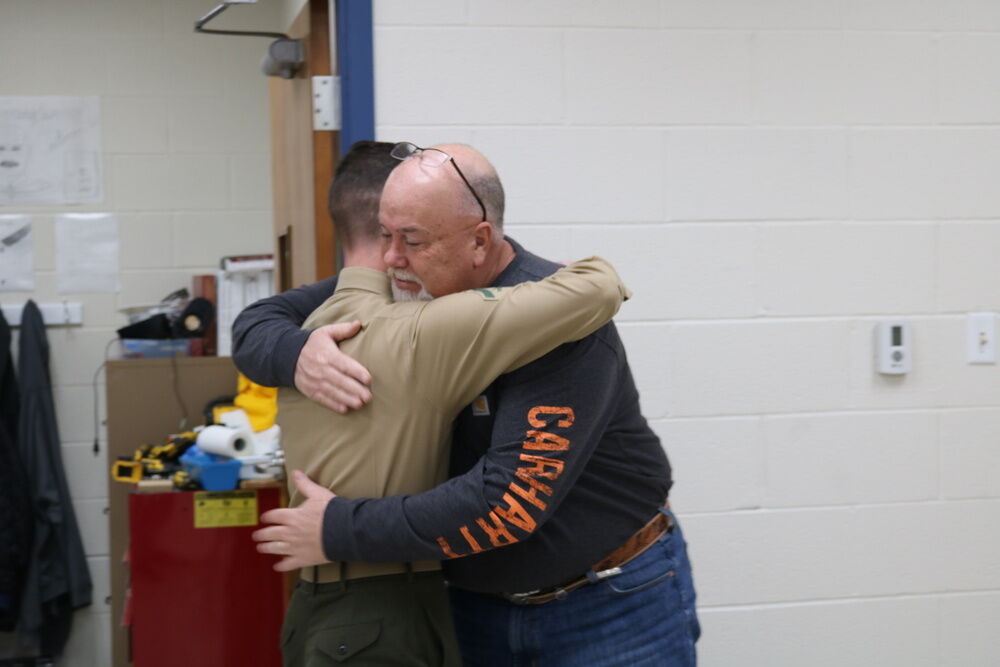 Tobie Herring, a lance corporal with the United States Marine Corps, and his dad John Herring, Quitman High School geometry and construction teacher, hug each other after Tobie Herring, 21, surprised him Monday at the high school. 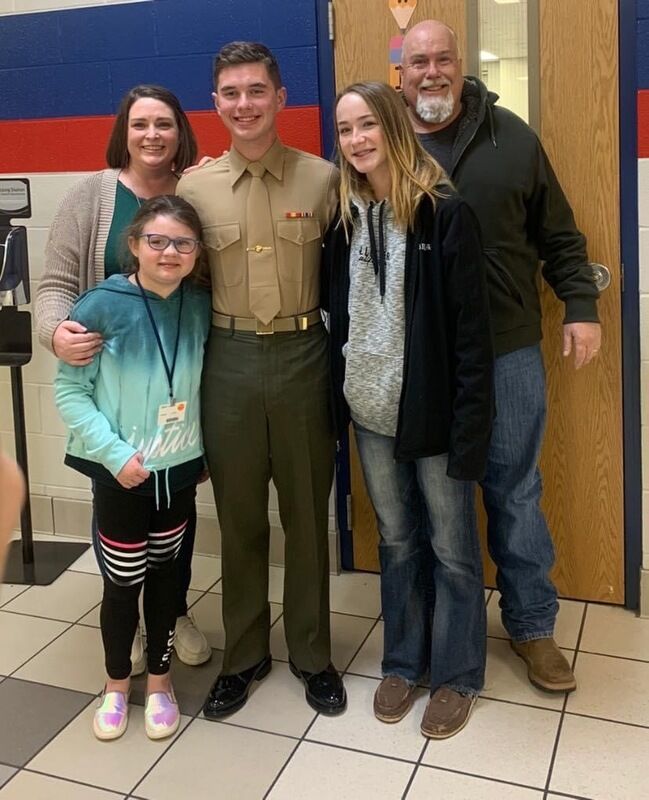 The Herring family stands together for a photo after Tobie Herring, a lance corporal with the United States Marine Corps, surprised his dad and younger sisters with a family reunion at Quitman High and Elementary on Monday. 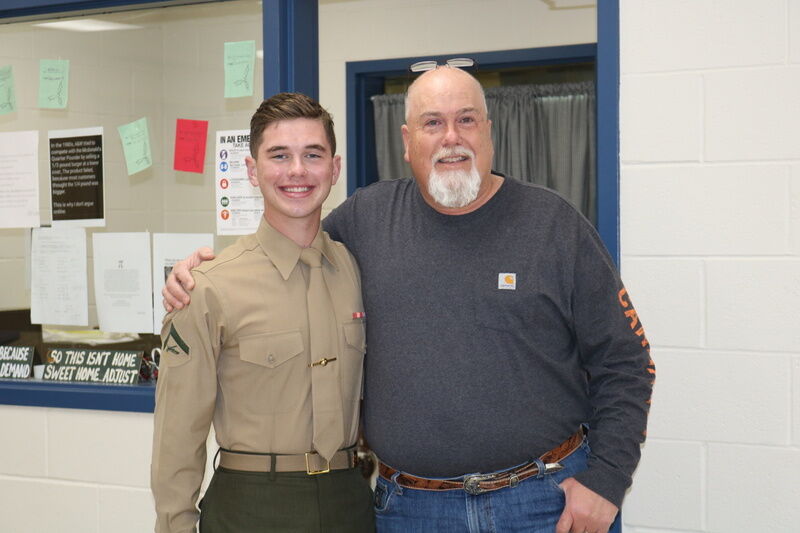 Tobie Herring, a lance corporal with the United States Marine Corps, and his dad John Herring, Quitman High School geometry and construction teacher, hug each other after Tobie Herring, 21, surprised him Monday at the high school.

The Herring family stands together for a photo after Tobie Herring, a lance corporal with the United States Marine Corps, surprised his dad and younger sisters with a family reunion at Quitman High and Elementary on Monday.

Tobie Herring, a lance corporal with the United States Marine Corps, gave his dad and younger sisters one of the best gifts on Monday — a family reunion.

He hadn’t seen his dad, Quitman High School teacher John Herring, since Father’s Day weekend last year in June when his dad visited him in San Angelo briefly, and it was even longer since he’d seen his sisters, Elizabeth, 16, and Millie, 9, and his stepmom Lindsey.

He enlisted in the USMC in December 2019 after graduating from Van High School in 2018. He graduated from boot camp on March 14 last year, but due to COVID-19 the family had to watch the ceremony on video.

It was over a year and a half since the whole family was together until Monday when Tobie Herring visited both Quitman High and Elementary to surprise his family members.

With the help of his stepmom, Tobie Herring, 21, walked into his dad’s classroom for an overwhelming surprise followed by a large hug.

“It was a very nice surprise,” John Herring said. “It’s so good to see him, and we’ve missed him the last two Christmases because he was in the Marines.”

John Herring said his son then spoke to his construction geometry students about being in the Marines.

After that he went over to his sister Elizabeth’s AP English class and she was filled with joy to see her brother.

The family joined together to surprise his third-grader sister Millie at Quitman Elementary cafeteria. When he surprised her, she jumped up to hug her brother.

“That’s all she wanted was her brother to come surprise her at school, and she definitely was surprised,” John Herring said. “The little girl she just cried. The elementary kids understood what was happening and were clapping.”

Tobie Herring said he was really happy to see his dad and sisters and it felt great to see them excited for the family reunion.

"Being able to see them in person and hold them and a talk to them, it's a real experience to be able to do that," he said.

He said he's been spending time with family, seeing old friends and showing people how the Marines have helped him become a better person.

While it's been difficult to adjust from the Marines, he's enjoyed seeing family after not seeing them for a long time except through video phone calls.

He is based at Camp Pendleton in California, where he is an aviation rescue firefighter. In that role, he puts out fires on aircrafts in case of an emergency and then tries to save the pilots' life.

He wants to continue with the Marines, and once he retires join a fire department by using certifications earned during his military service.

"My family have been teachers and that's really what I 'd like to do as well," he said.

He’ll have about two weeks to spend time with family before returning on March 16. The father and son duo plan to go hunting along.

Tobie Herring said he joined the Marines when he was unsure of what he wanted to do after high school. Since joining, he's learned discipline, honor and self-respect.

"Everything's been great for me now since I've joined," he said. "I'm excited and gung-ho about waking up each and doing what the Marine Corp wants me to do."

John Herring said he’s extremely proud of his son for serving in the Marines.

“It was just overwhelming. I couldn’t even begin to describe the feeling of him being a Marine and proud. His whole family we’re all so proud of him,” John Herring said. “It’s awesome. It’s just indescribable the sacrifice we have to make but I know that he is serving his country. He has other family members in the armed services and he just wanted to be the best that he could be.”