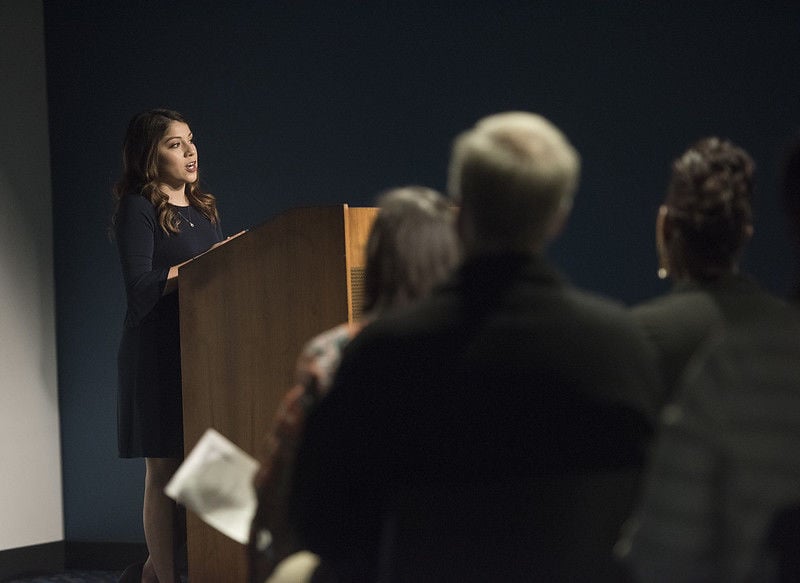 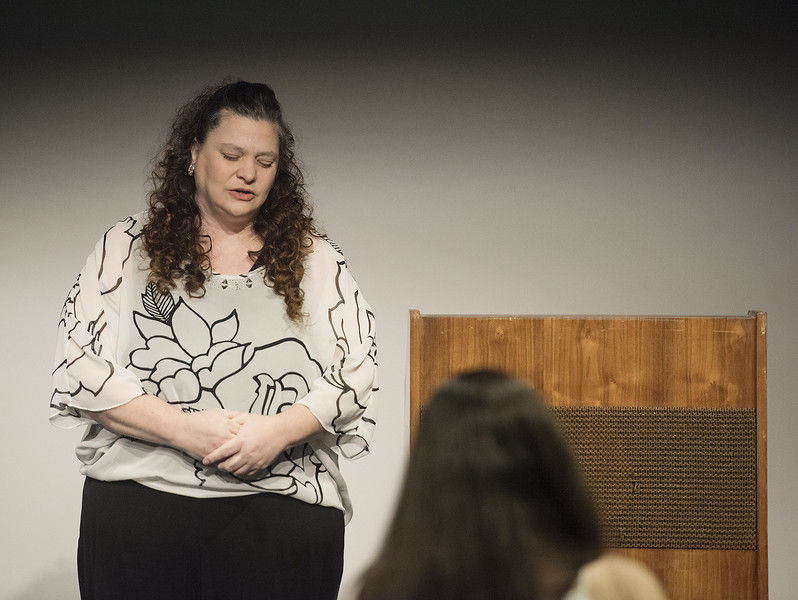 Marie Davis leads the invocation at the East Texas Crisis Center Hope Awards ceremony held Thursday April 27, at Tyler Public Library's Taylor Auditorium. April is Sexual Assault Awareness Month. Awards were presented to outstanding citizens who have gone above and beyond as volunteers and professionals to help victims of sexual violence. (Sarah A. Miller/Tyler Morning Telegraph) 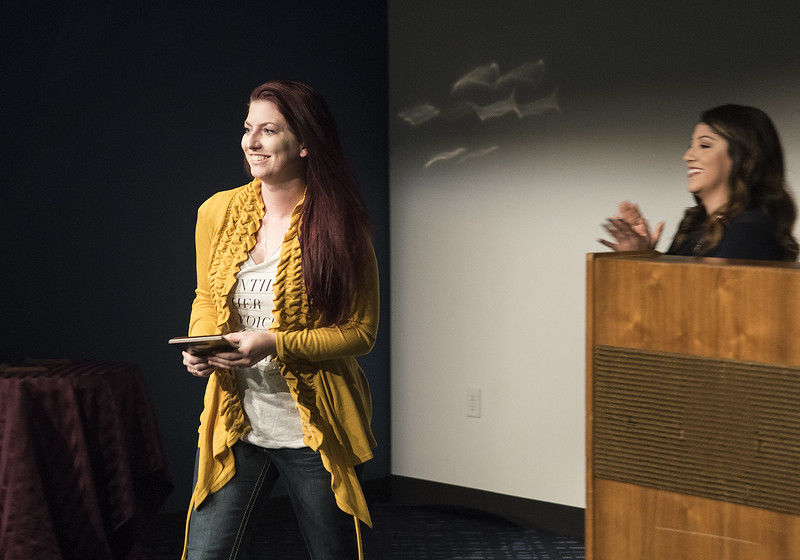 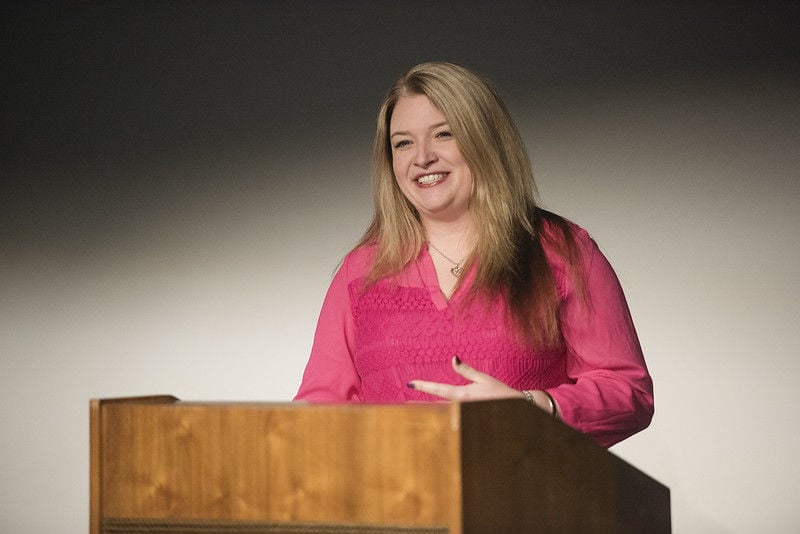 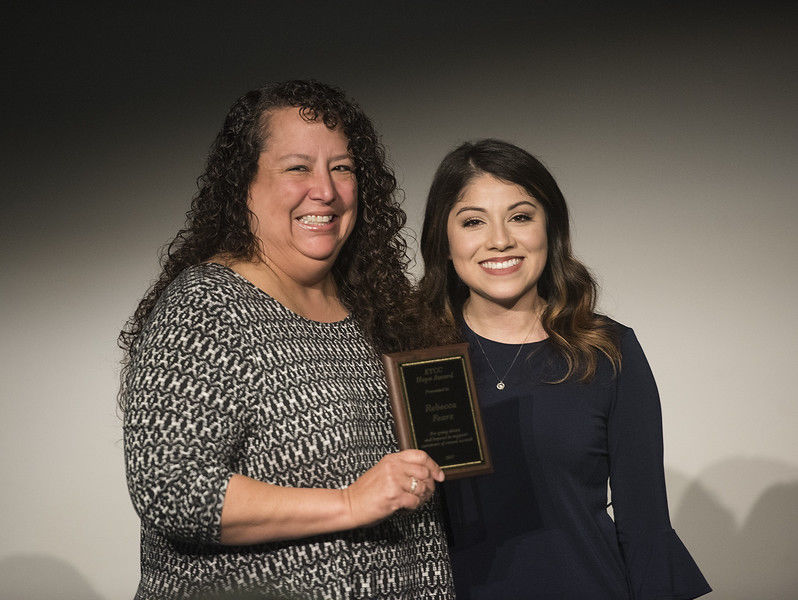 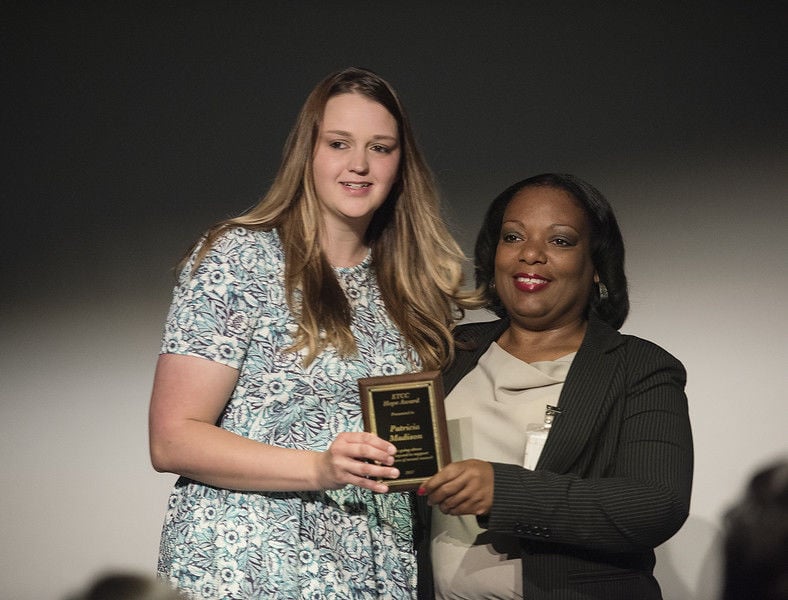 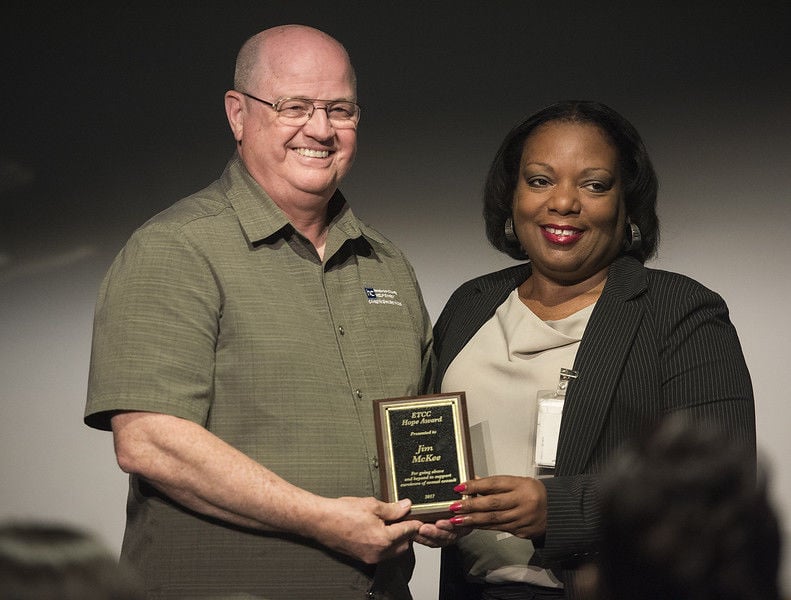 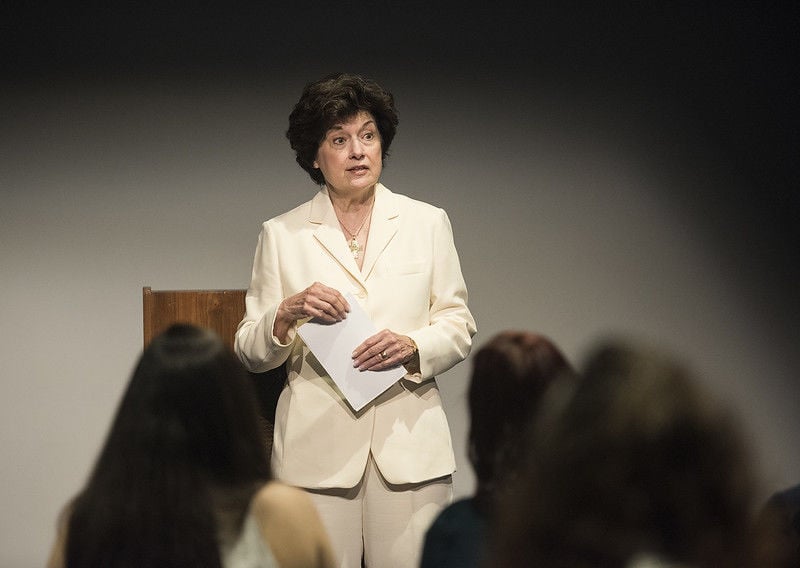 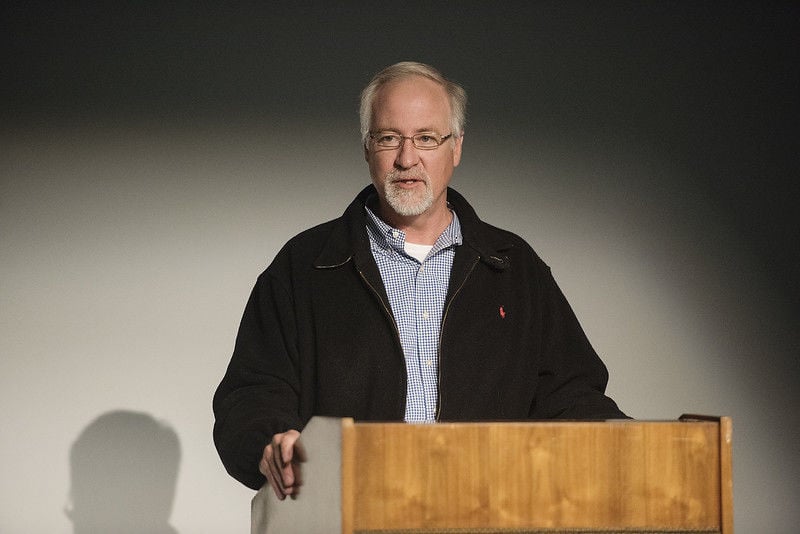 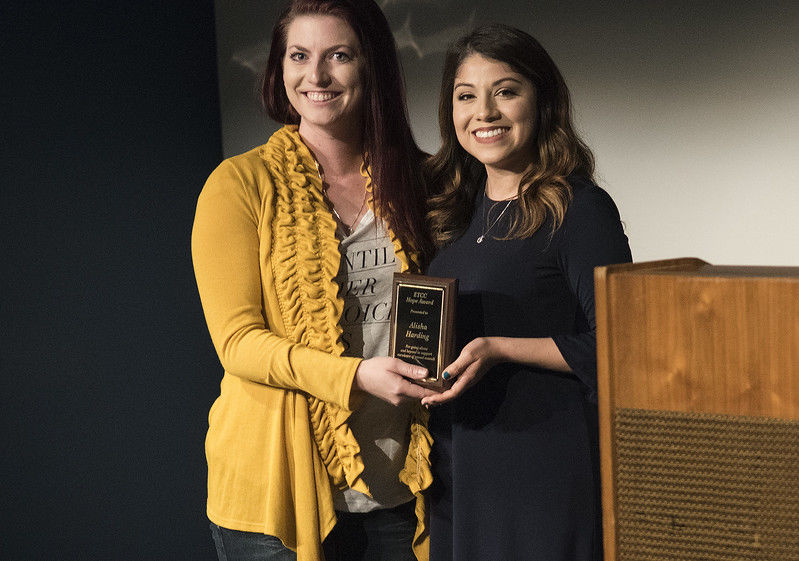 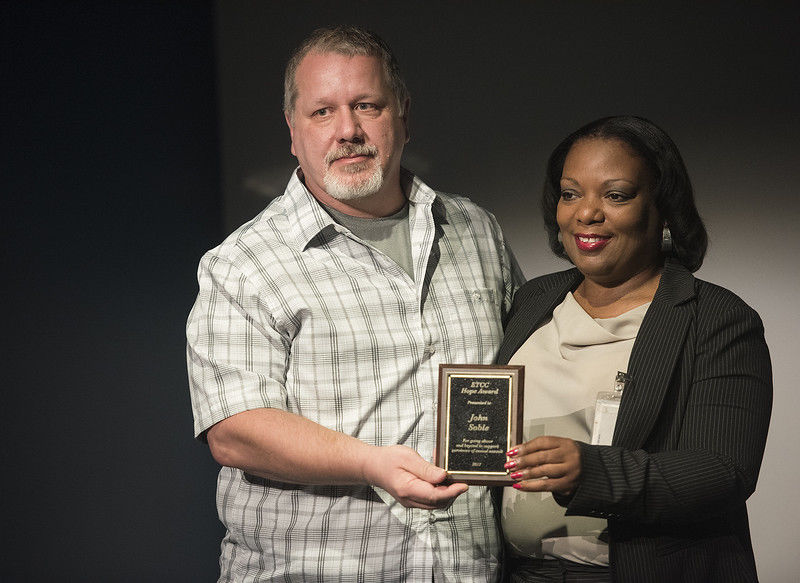 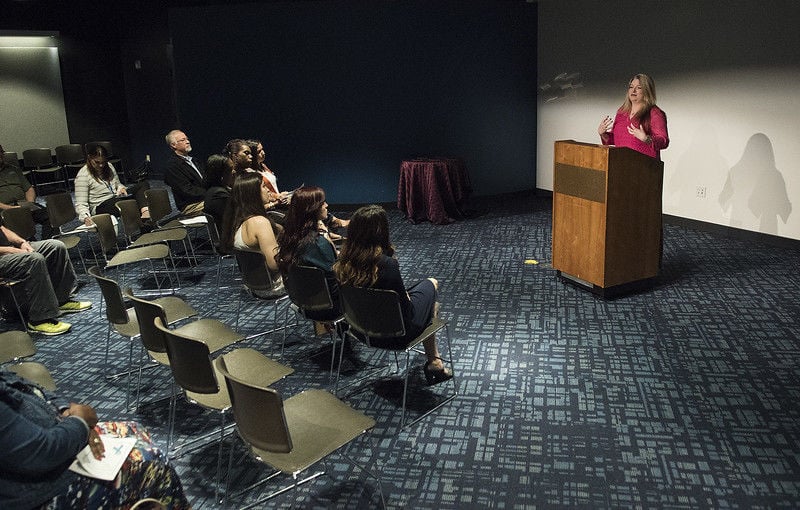 Marie Davis leads the invocation at the East Texas Crisis Center Hope Awards ceremony held Thursday April 27, at Tyler Public Library's Taylor Auditorium. April is Sexual Assault Awareness Month. Awards were presented to outstanding citizens who have gone above and beyond as volunteers and professionals to help victims of sexual violence. (Sarah A. Miller/Tyler Morning Telegraph)

Every day the East Texas Crisis Center works with law enforcement, local hospitals and volunteers to coordinate care for victims of sexual assault. In 2016, the crisis center helped 163 survivors of sexual assault in Smith County.

About 25 friends, family and co-workers gathered in the Tyler Public Library’s Taylor Auditorium for the annual East Texas Crisis Center Hope Awards. Two nurses and three volunteers were honored as Hope Award recipients for their efforts in the community with sexual assault survivors.

Mayor Martin Heines read a proclamation declaring April Sexual Assault Awareness Month in the city of Tyler. He encouraged all residents to support the East Texas Crisis Center and help survivors of sexual assault throughout the year.

“Sexual Assault Awareness Month calls attention to the fact that sexual violence is widespread and impacts every community and neighborhood in Smith County,” Heines said. “Whereas a community we recognize that we must all speak out to change the culture that places blame on survivors rather than their attacker and to prevent sexual violence and sexual assault at its roots. We must promote healthy relationships and respect for every individual by shifting our attitude and beliefs so that the perpetrators will be held accountable at every level.

This year, the East Texas Crisis Center wanted to bring attention to sexual assault and violence with a theme that focused on culture change. “Believe Survivors and Change the Culture” was chosen as the theme for Sexual Assault Awareness Month in Tyler.

During the keynote speech, Meghan Richardson, the East Texas Medical Center’s Sexual Assault Program coordinator, said the stories she hears are difficult. The myths that surround sexual assault make it hard for people to come forward and report the assault.

“Words have a lot of impact,” she said. “The words, ‘I believe you,’ make a huge difference in a survivor’s life. Survivors have very little incentive to come forward. They recant a traumatic experience to people who may not believe them. They are picked apart as a victim to find out how perfect of a victim they are.”

In Texas, where 2 in 5 women  and 1 in 10 men experience sexual assault in their lifetimes, the Hope Awards recognize people in East Texas whose life work and volunteer service is to help survivors.

“When sexual assault victims come into the ER, they are triaged as level 2, they may not be physically dying, but their heart and soul are breaking,” said Rebecca Fears, Sexual Assault Nurse Examiner at Christus Trinity Mother Frances Health System. “I don’t want anyone with a bad attitude to take care of them. I don’t allow any aspect of their care to be marginalized while I collect evidence and address their needs.”

The East Texas Crisis Center provides support and helps each and every survivor of sexual assault.

“This is another step forward into the talk that can change the culture of initial disbelief,” said Alisha Harding, Sexual Assault Nurse Examiner at East Texas Medical Center. “There is physical pain and pain that cannot be measured or seen. If I am able to be there for a survivor, I can create a different attitude for that person.”