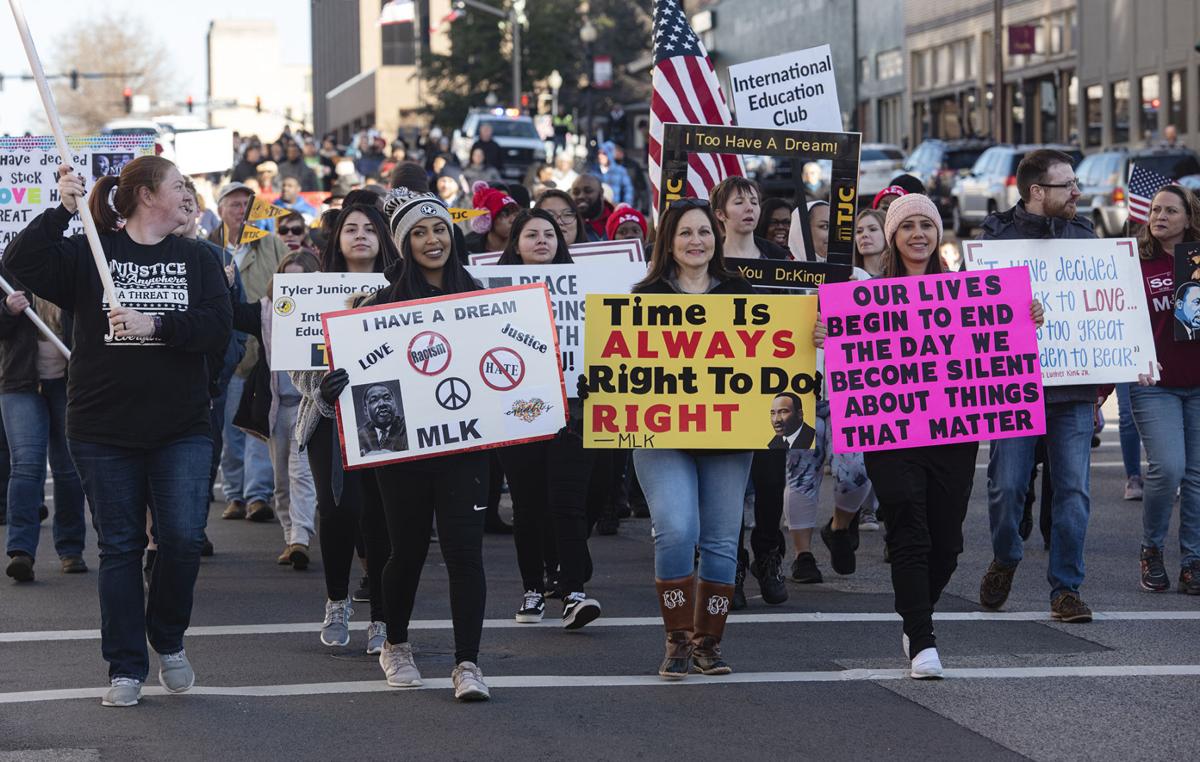 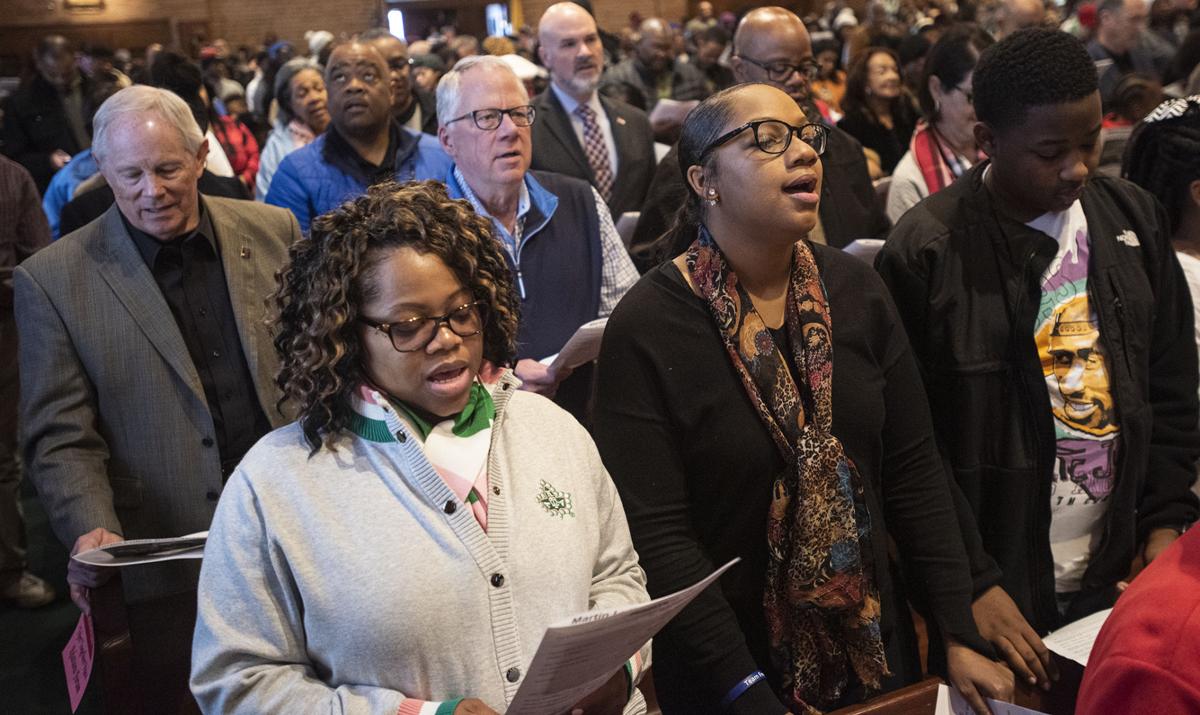 Nikishia Allen and Ambra Phillips of the Tyler Together Race Relations Forum sing “Lift Every Voice & Sing” along with other attendees of the 34th Annual Martin Luther King Jr. Interfaith Community Program held at Cathedral of the Immaculate Conception in Tyler. 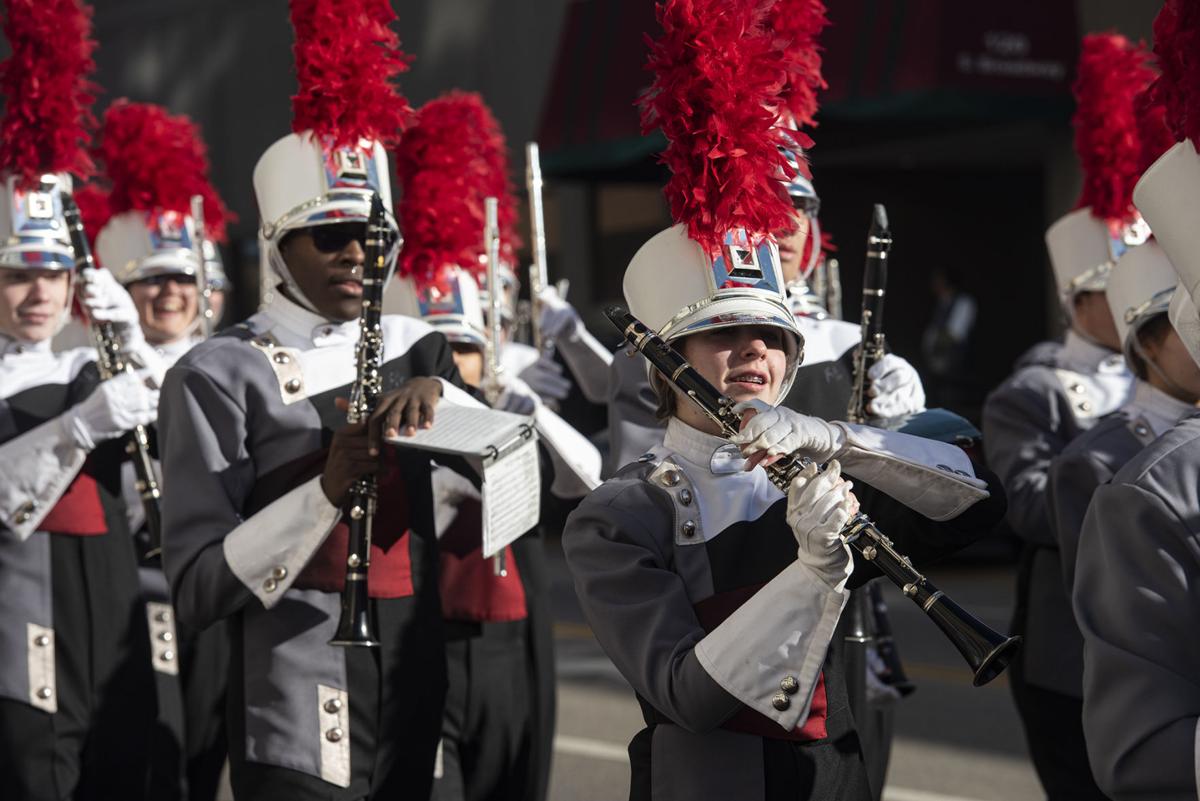 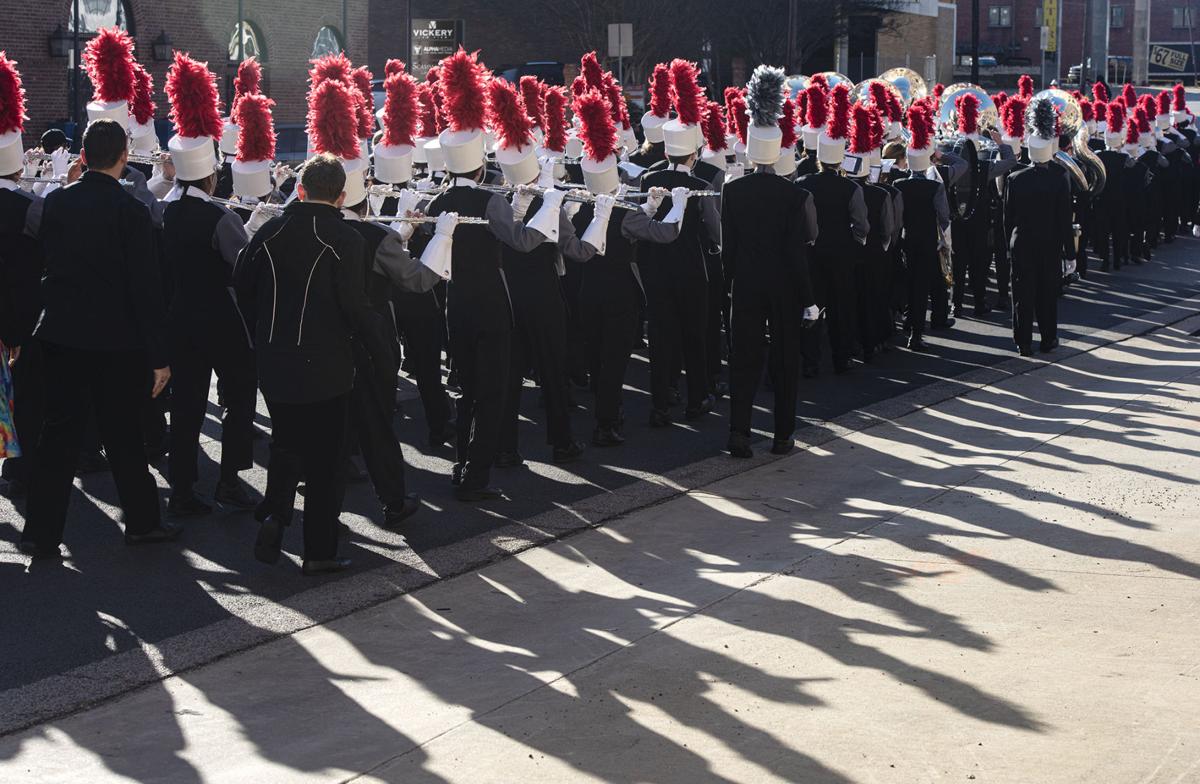 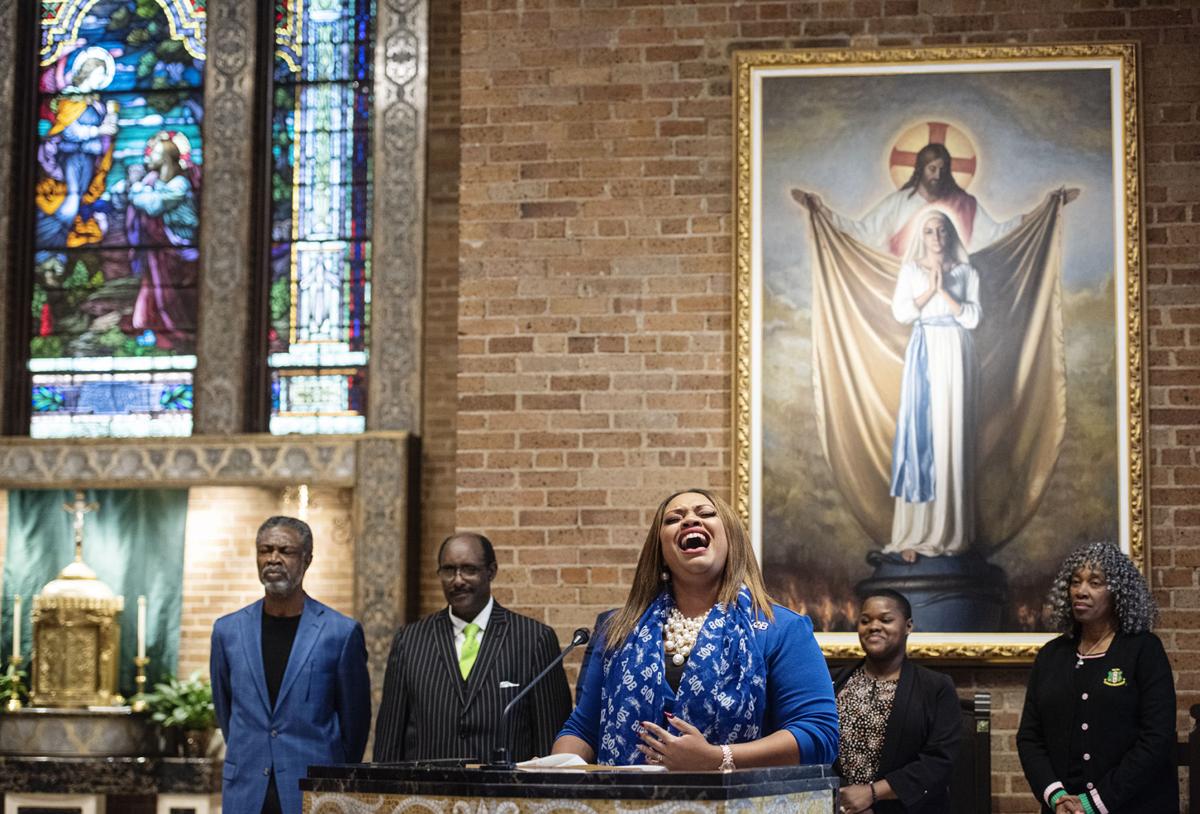 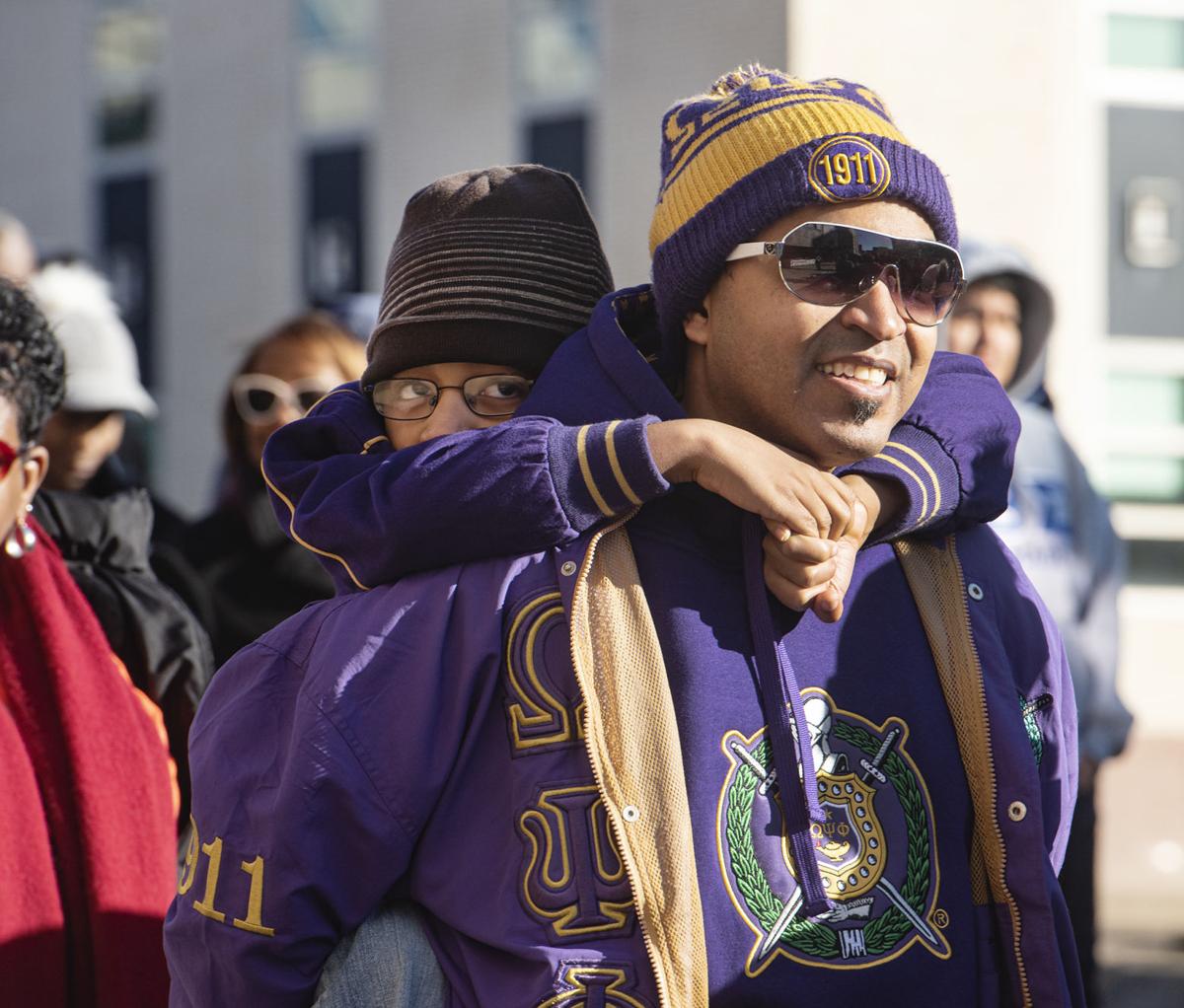 Charles E. Coleman IV, 9, rides on the back of his father Charles E. Coleman III as they participate in the Martin Luther King Jr. march in downtown Tyler, Texas on Monday, Jan. 20, 2020. (Sarah A. Miller/Tyler Morning Telegraph) 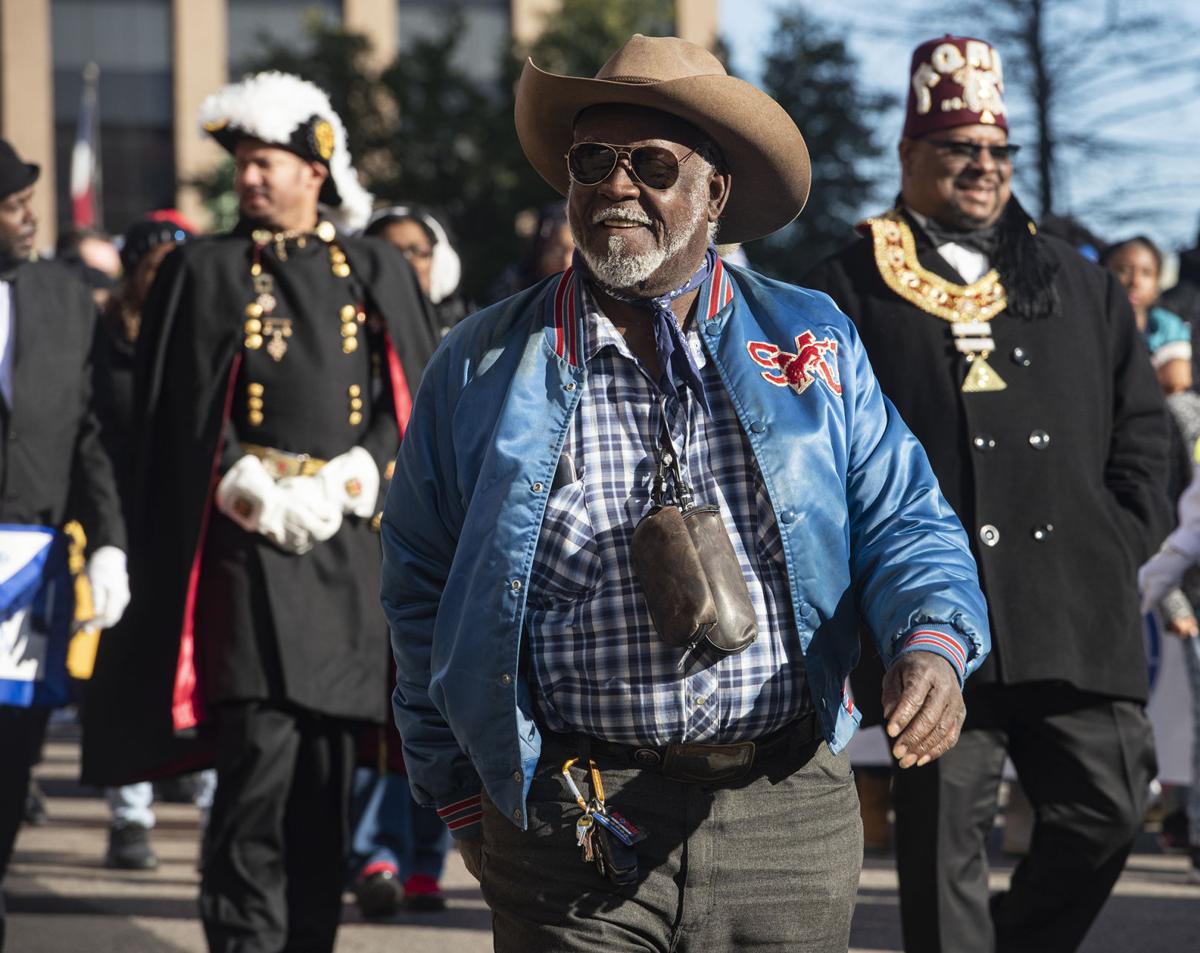 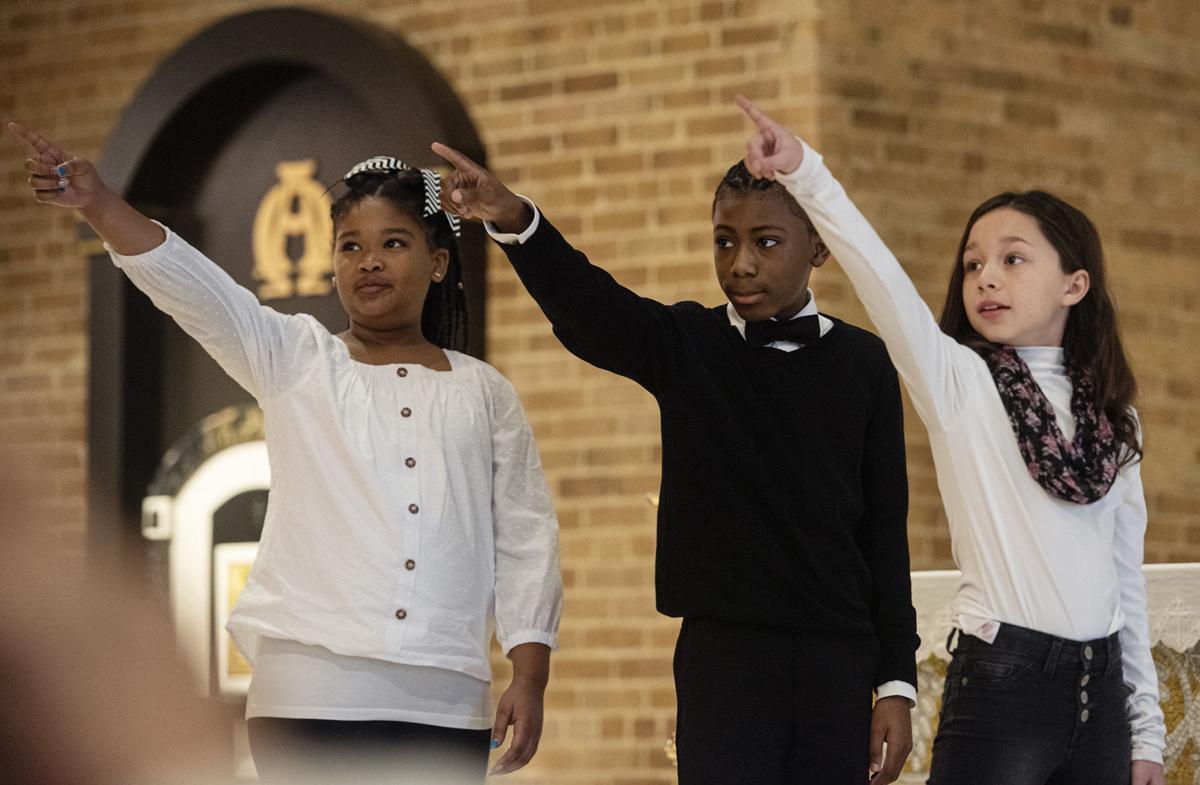 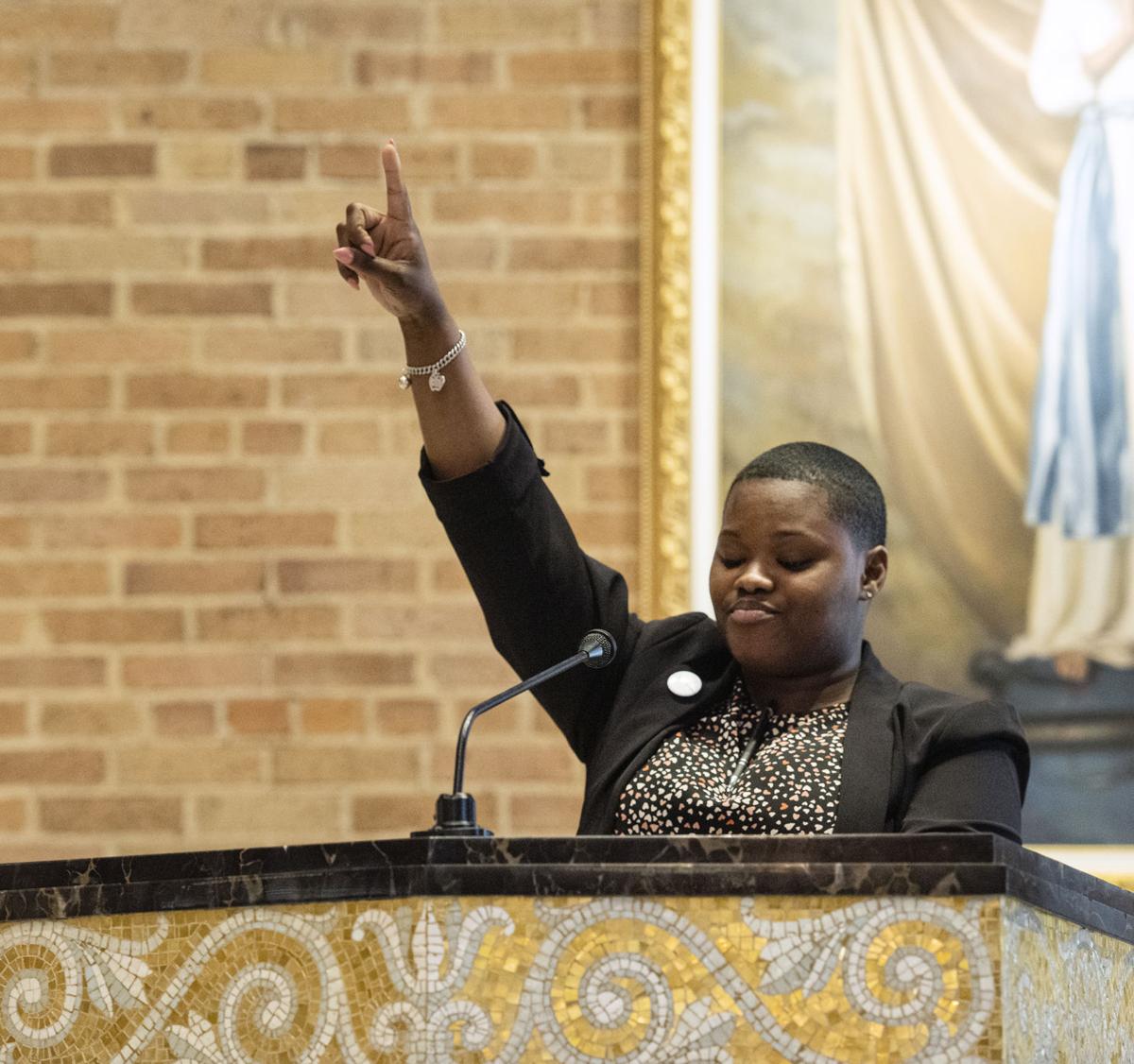 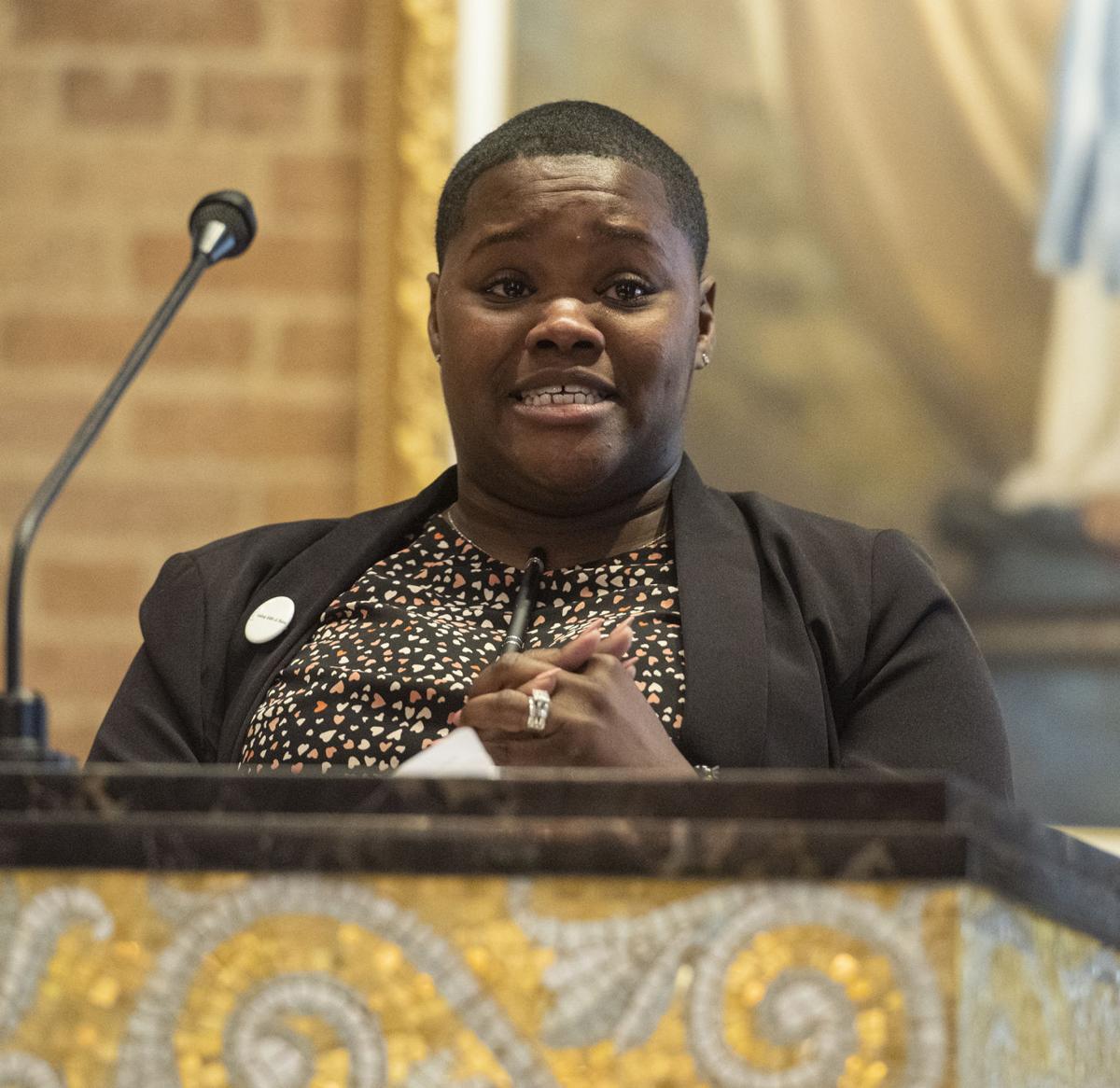 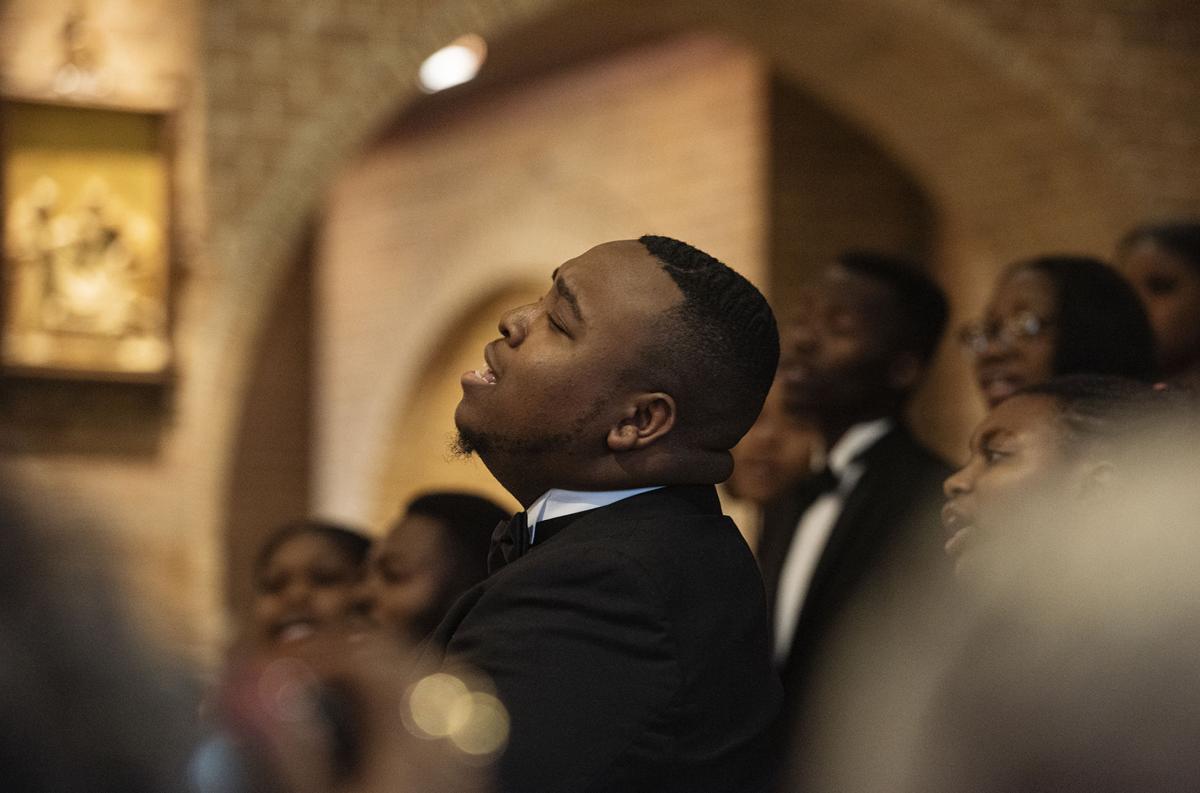 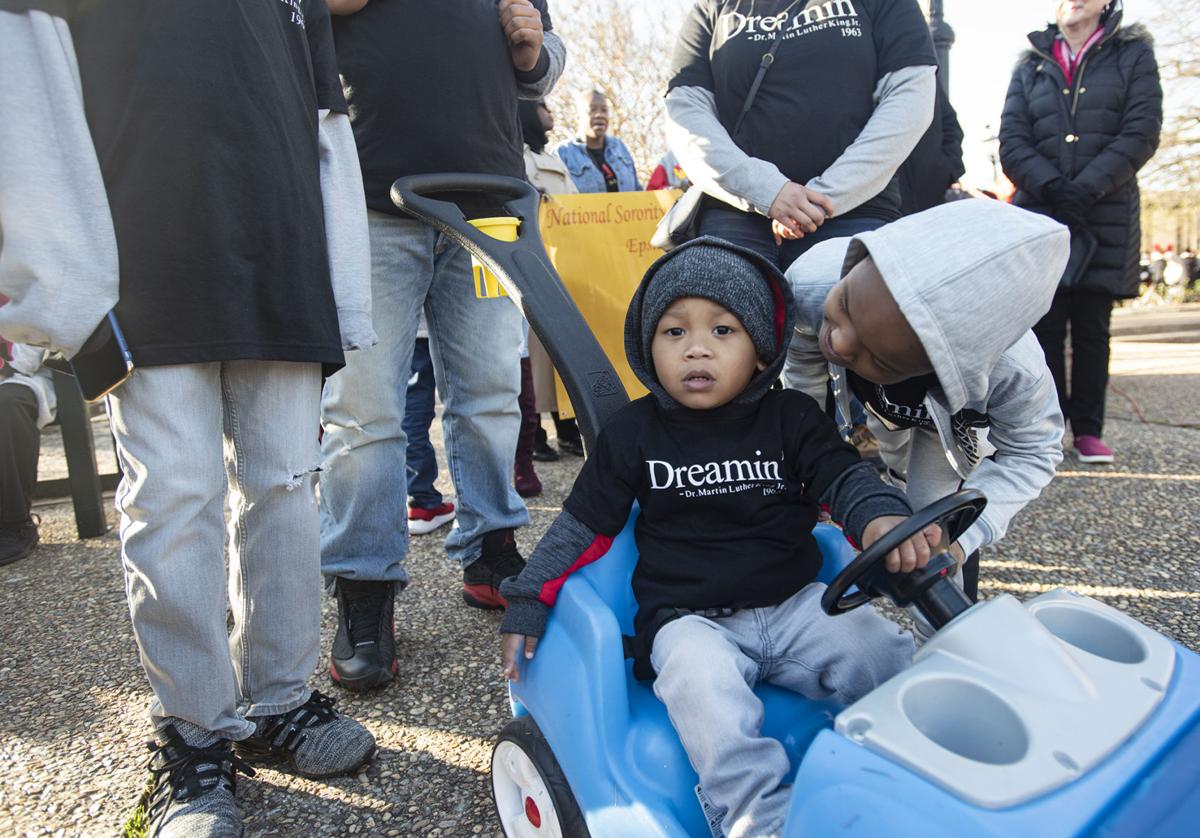 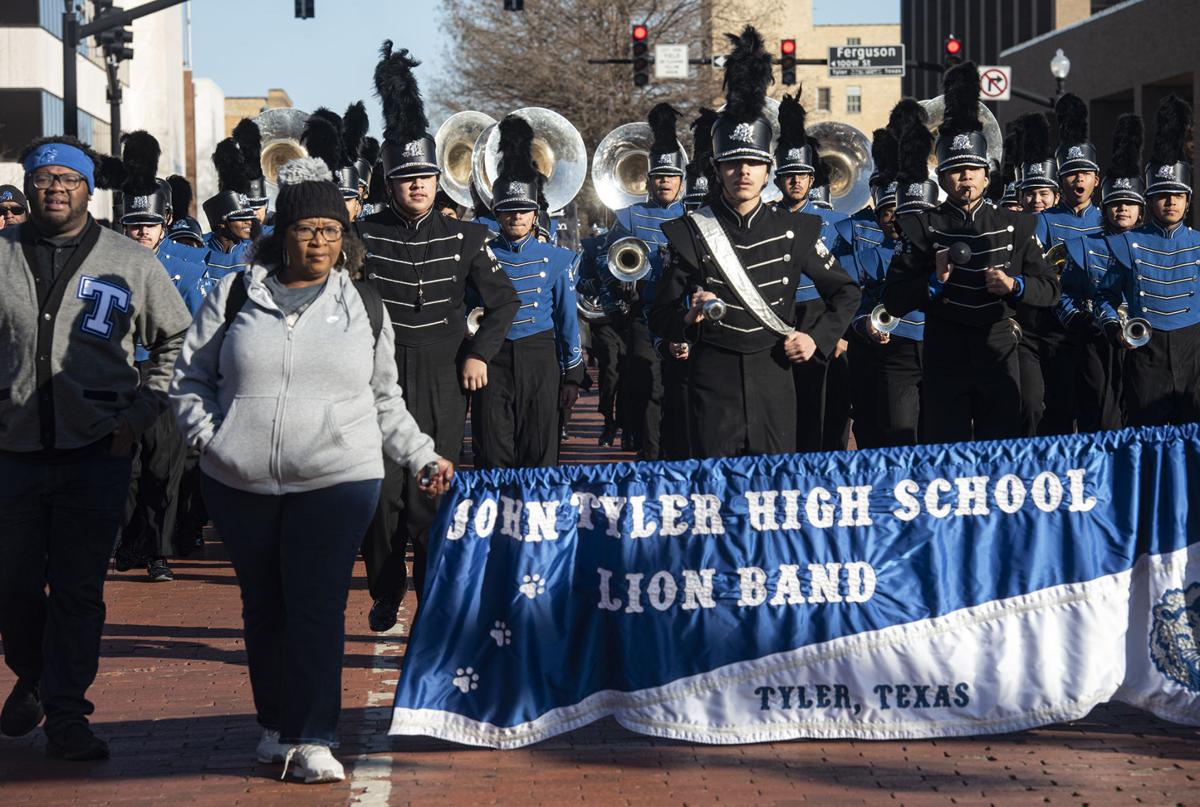 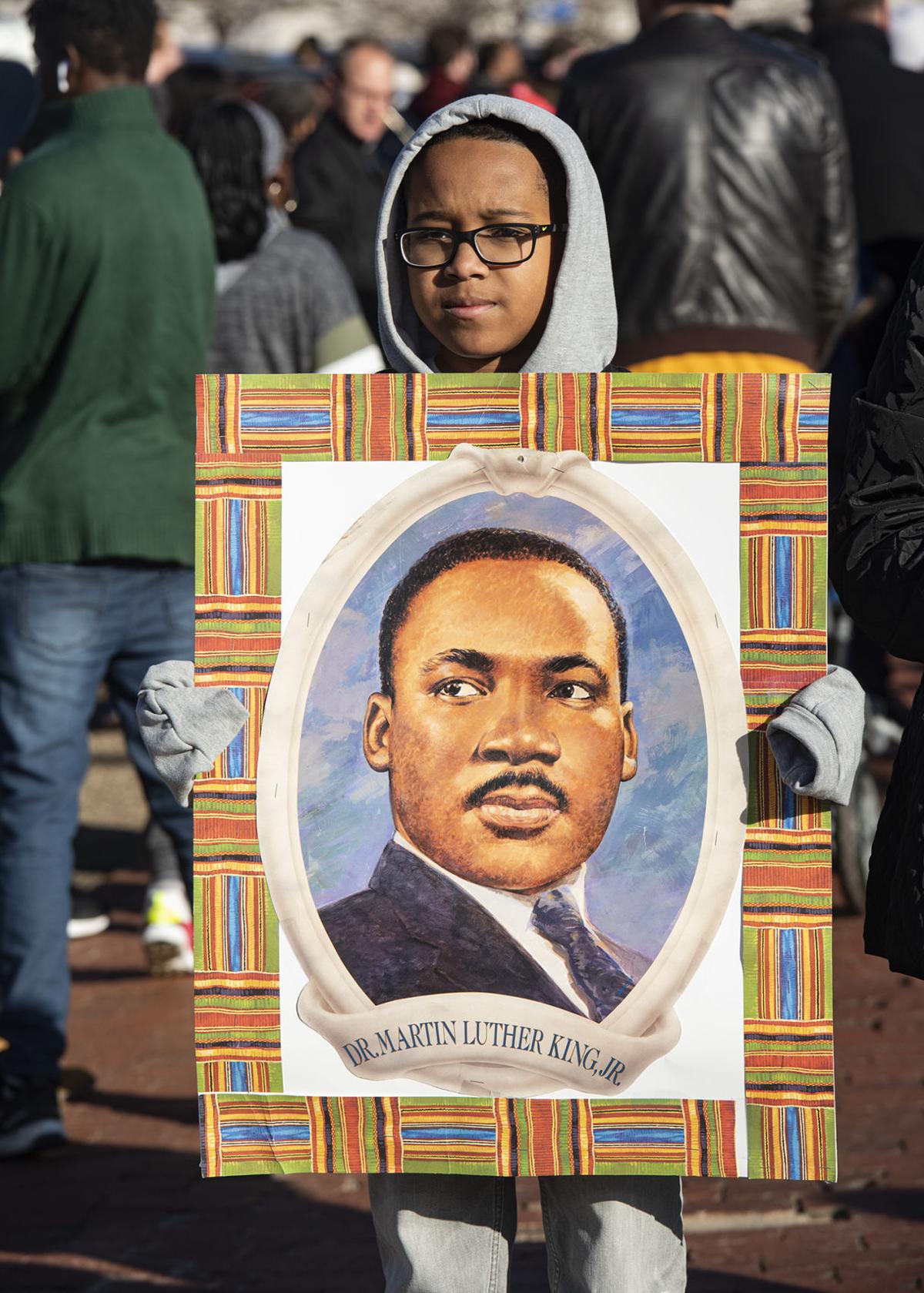 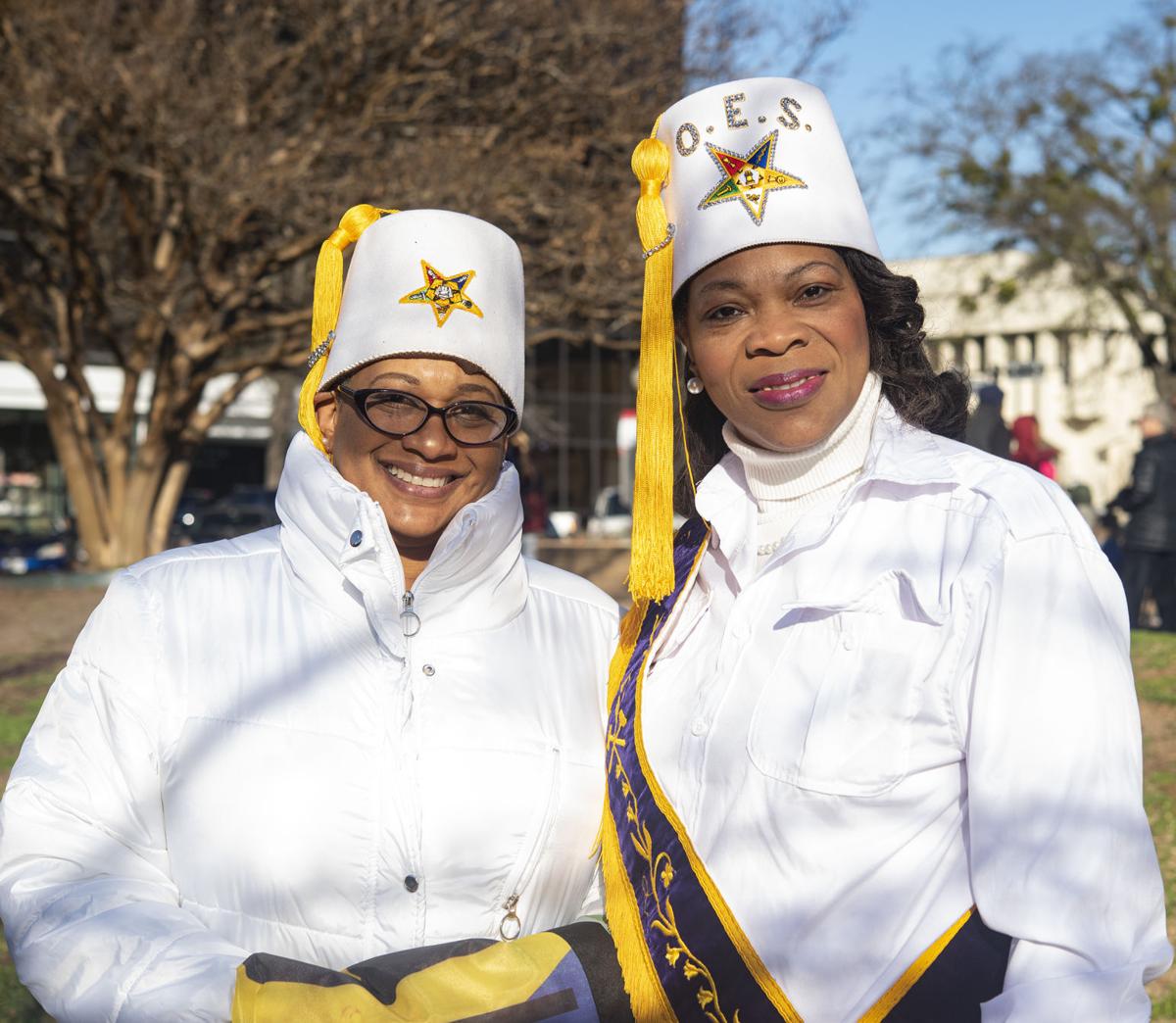 Nikishia Allen and Ambra Phillips of the Tyler Together Race Relations Forum sing “Lift Every Voice & Sing” along with other attendees of the 34th Annual Martin Luther King Jr. Interfaith Community Program held at Cathedral of the Immaculate Conception in Tyler.

Charles E. Coleman IV, 9, rides on the back of his father Charles E. Coleman III as they participate in the Martin Luther King Jr. march in downtown Tyler, Texas on Monday, Jan. 20, 2020. (Sarah A. Miller/Tyler Morning Telegraph)

To see all races come together, cousins Angela Jackson and Alberta Davis, of Henderson, came out for the first time to Tyler’s Dr. Martin Luther King Jr. Day celebration Monday.

Davis, 62, said she had the notion to come to the celebration. She said the King’s legacy is to help people and bring peace.

Hundreds came out to the Tyler Together Race Relations Forum’s 34th annual Dr. Martin Luther King Jr. Day Interfaith Community Program with the theme “Only in the Darkness Can You See the Stars.”

Led by the John Tyler High School marching band, the parade began at T.B. Butler Plaza in downtown Tyler and ended at the Cathedral of Immaculate Conception, where the main program featuring music and various speakers was held.

Donald Ravenell, 61, alongside his wife, Alma, of Tyler, came out to celebrate King for the first time in Tyler. He said it’s a day they’ve been waiting for a long time.

“To see the people out here is beautiful (white, black, hispanic, young and old),” he said. “That’s what the dream is all about.”

For black people, Martin Luther King Jr. Day is almost like a day of freedom, much like the Fourth of July (Independence Day), Alma Ravenell said.

“It’s good to see a lot of leaders as well,” she said.

At the program, Smith County Precinct 4 Commissioner JoAnn Hampton encouraged those present to be the love and change agents the community absolutely needs.

“On behalf of the Smith County Commissioners Court, we are grateful to serve this community and will continue to be the change we all want to see,” Hampton said. “Making the dream of Dr. King and others a true reality.”

Tyler Mayor Martin Heines told the crowd his favorite quote from King is, “Life’s most persistent and urgent question is, ‘What are you doing for others?’” He stressed the importance of helping others in need.

“Tyler, Texas, is a better place because of y’all’s involvement,” Heines said. “Thank you for everything you have done.”

He was proud to see how global the world has become.

Keynote speaker Sha’Rell Webb, founder of Coding With a Twist, told of obstacles she overcame over the years. She said she was raised by her aunt and uncle because her mother is addicted to cocaine.

She moved to Houston to finish high school and was accepted to Jarvis Christian College in Hawkins, where she graduated.

Feeling alone in college, Webb told attendees she tried to commit suicide twice, but she made it out of that state of mind.Webb then became a science teacher and wanted to educate students who were underestimated.

“I made science fun but relatable,” Webb said. “Science will be culturally relevant and not paint the picture of a white man in a lab coat.”

She founded Coding With a Twist to bring computer science, coding and robotics to students.

Webb emphasized the importance of having dignity, being the best you can be and being committed to beauty, love and justice.

“By all means, keep moving,” she said.

Tyler Together Race Relations Forum President Jeff Williams said there is a need to build bridges, not walls.

“It takes hard work. We have to learn to get out of our own comfort zones,” Williams said. “Over time, we learn to work together.”

Williams concluded his remarks with King’s quote, “We may have all come on different ships, but we’re in the same boat now.”

KATD was recognized with the 2020 Rev. Jerome Milton Award for Non-Violent Social Change. Doris Batson, executive creative director and founder, expressed her gratitude to the community and said without a dream, there is no vision.

At the church, performances included the Jarvis Christian College choir and Jessilyn Yaber sang the “Star Spangled Banner.” Attendees also sang, “Lift Every Voice and Sing,” which is known as the National Black Anthem.

Jonah Carston, 44, of Tyler, said he comes to the program in Tyler every year to celebrate King’s dream and how it came true.

“I loved the program,” Carston said. “The program was exciting, especially Jarvis Christian College and the keynote speaker.”