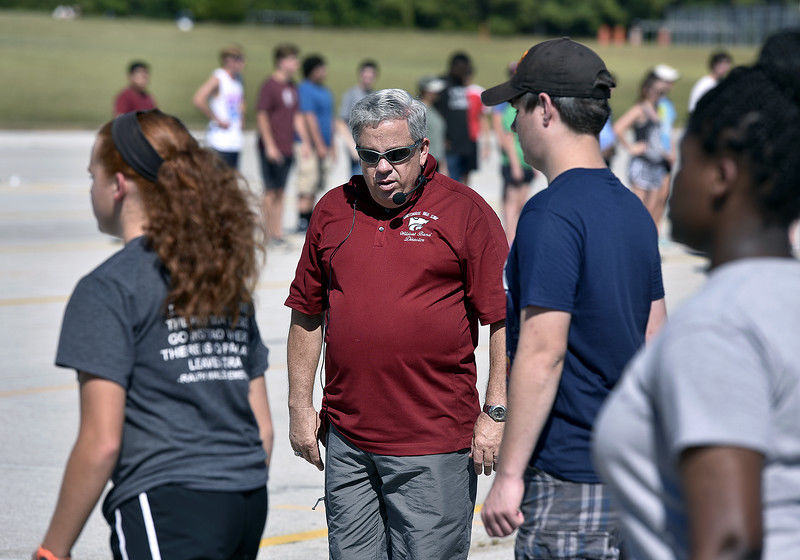 Wildcat Band Director Denny Whitley, center, watches the feet of one of the squads as students learn marching band technique on Thursday, Aug. 4, 2016, at the high school parking lot in Whitehouse. It was the first day of marching practice outside for the band as it prepares for the upcoming school year. Andrew D. Brosig/Tyler Morning Telegraph via AP 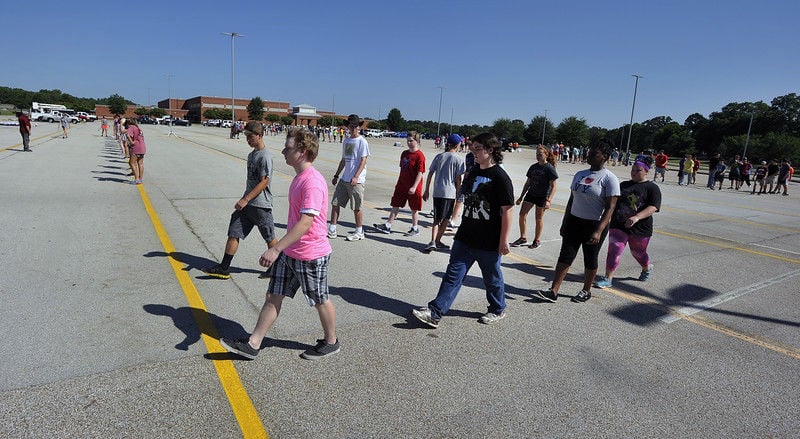 A band section marches by in unison as the rest of the Wildcat Band practices on field techniques Thursday, Aug. 4, 2016, at the high school in Whitehouse. Andrew D. Brosig/Tyler Morning Telegraph via AP 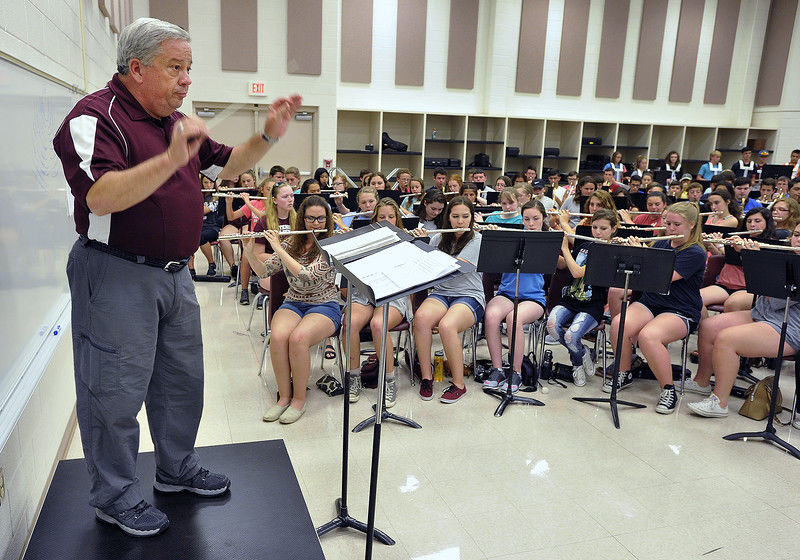 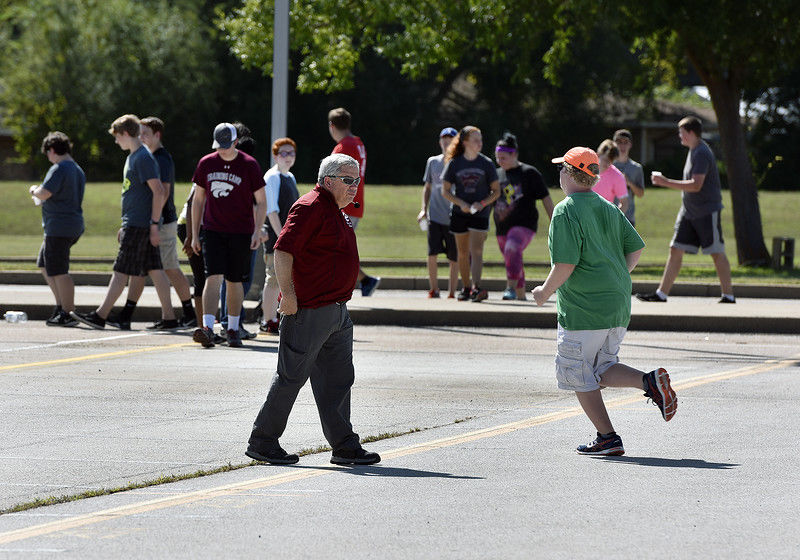 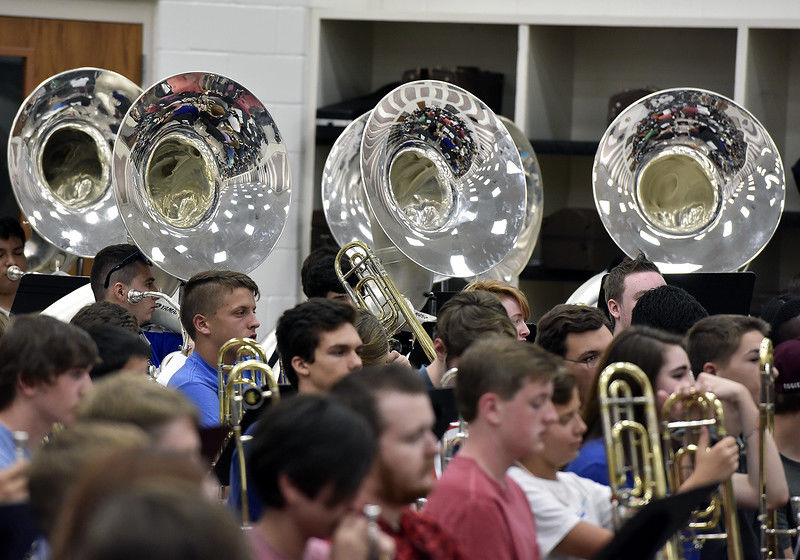 The bells of the tuba section reflect the light during a preseason rehearsal of the Whitehouse High School band on Monday, Aug. 1, 2016, at the school band hall. Director Denny Whitley received the 2016 Meritorious Achievement Award for Outstanding commitment to Music Education from the Texas Bandmasters Association during its convention in July in San Antonio. Andrew D. Brosig/Tyler Morning Telegraph via AP 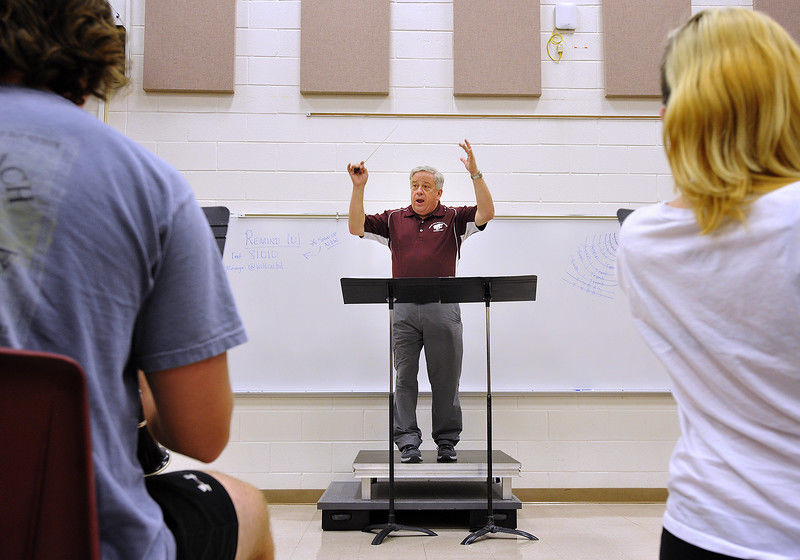 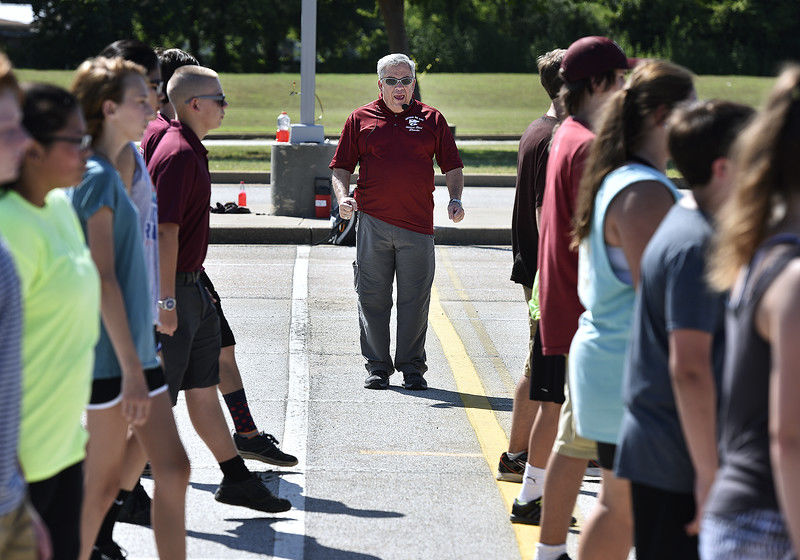 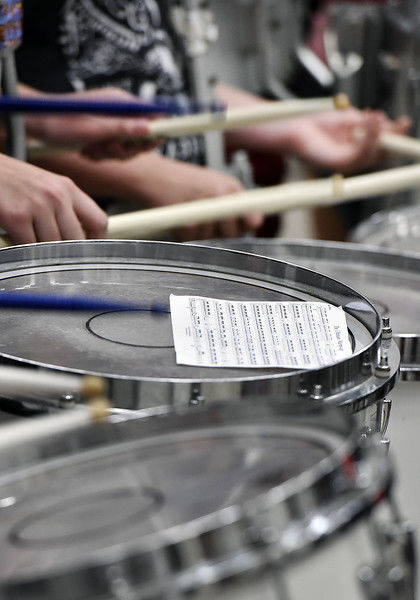 Wildcat Band Director Denny Whitley, center, watches the feet of one of the squads as students learn marching band technique on Thursday, Aug. 4, 2016, at the high school parking lot in Whitehouse. It was the first day of marching practice outside for the band as it prepares for the upcoming school year. Andrew D. Brosig/Tyler Morning Telegraph via AP

A band section marches by in unison as the rest of the Wildcat Band practices on field techniques Thursday, Aug. 4, 2016, at the high school in Whitehouse. Andrew D. Brosig/Tyler Morning Telegraph via AP

The bells of the tuba section reflect the light during a preseason rehearsal of the Whitehouse High School band on Monday, Aug. 1, 2016, at the school band hall. Director Denny Whitley received the 2016 Meritorious Achievement Award for Outstanding commitment to Music Education from the Texas Bandmasters Association during its convention in July in San Antonio. Andrew D. Brosig/Tyler Morning Telegraph via AP

That first football game of the season is nothing new for band director Denny Whitley. But even after 27 years leading the Whitehouse High School Wildcat Band and 45 years total teaching band and music in Texas, Whitley still gets excited to watch his students step foot on the marching field for the first time.

"It's exciting when you take kids that are all working for a common purpose, and their goal is to be very successful," he said. "They always make it work."

Putting others' success before his own is something of a life theme for the director. And it's a quality that recently earned him recognition from his peers across the state.

"Mr. Whitley is highly respected in our region and across the state," said Lindale High School head band director Steven Moore. "His leadership in Region 21 and mentorship of the younger directors in our region helps to keep Region 21 moving forward in a positive direction."

Moore is the president of the Texas Bandmasters Association, which in July honored Whitley with the 2016 Meritorious Achievement Award for Outstanding Commitment to Music Education during the organization's 69th annual convention/clinic in San Antonio. The association recognizes those who have made a difference in the lives of band students in Texas.

This tradition dates back 16 years and honors those who exemplify the qualities of an exemplary band director. For Whitley, success means constantly working to bring out the best in others and push them to excellence.

His motto is "Make your best better."

When a student was struggling with a piece of music and couldn't play it very well, he remembers telling her that if that was her best she had to make her best better. Those words are what former students remember when they move on to college and adult life.

Whitley said it was his own elementary and high school band teachers who motivated him to pursue the profession, even though his mother wanted him to be a dentist.

Whitley graduated from Honey Grove High School in 1967. He went on to East Texas State University in Commerce (now Texas A&M - Commerce) and majored in music education. His teaching career started in 1971 at Tipson and continued in Clarksville, before Whitley got hired in Whitehouse in 1989.

"I'm still having fun," Whitley said. "I'm getting to the age where I feel like I need to think about going fishing or something, but right now, I'm still doing this and still having fun. I'm taking it a day at a time."

Whitley admits new laws and technology have taken a little of the fun out of being a teacher.

"I'm not a technology person. I'm old school," he said. "They asked the composer John Williams how he wrote all of his songs, and he said that ‘I still use my yellow pad, a pencil and my piano.' I don't use the computer like everyone else does. That's where I'm at."

Keeping kids interested in music in a technologically advanced society is not always easy, especially in the East Texas heat and humidity, where high school bands spend many hours rehearsing and learning drills. Keeping more than 300 kids in the Whitehouse High School Wildcat Band motivated to perform at their best is a testament to Whitley's dedication and love for music.

"They have to enjoy it," he said. "It's fun for them, and it's very rewarding. The traditions that we've established at Whitehouse are what the kids want to live up to."

Whitley said many of his students have gone on to be doctors and lawyers and have other successful professions and jobs. More than 20 have gone on to become band directors, and many of them are working in East Texas. They are passing along the knowledge and wisdom they gained from their years in the Whitehouse band under his direction.

Chelsye Emmons, assistant band director at Chapel Hill High School, like many kids in East Texas, started band in the sixth grade. She was Whitley's drum major during her junior and senior years at Whitehouse High School and has many fond memories from her years in his band.

"I decided my junior year in high school to become a band director," she said. "I wanted to tell my students one day to ‘make your best better.' I wanted to touch young kids' lives the way he touched mine.

Audra Smith Haney, former feature twirler at the University of Missouri Marching Mizzou and current producer for the Christian Broadcasting Network, also was a drum major and graduated in 2001 from Whitehouse High School. She described Whitley as a "leader who created leaders".

"When I think of the hundreds of students that have been under his direction, I'm overwhelmed at the possible scope of his influence in the world," she said.

Another former student wanted to grow up to become president of the United States. That student, Nathaniel Moran, went on to be a lawyer and was recently sworn in as the acting Smith County judge.

"I have no doubt that he will one day run for president," Whitley said.

Whitley has taken his high school bands on trips throughout the United States. His most memorable was to Washington D.C. where they were mistaken as the president's band or the "Whitehouse" band, not the band from Whitehouse, Texas.

Whitley also is known as a devoted family man and Christian. He and his wife, Regina, have four children and three grandchildren.

Whitley is very humble and appreciative to have been selected as one of the recipients of the 2016 Meritorious Achievement Award for Outstanding Commitment to Music Education.

"I couldn't talk about it for a long time when the Texas Band Master's Association president Steven Moore told me about it," he said. "When I look at the list of people who have won this award and now my name on there, for me to be with them on that list and in their presence is mind boggling to me. I'm very humble and appreciative. I never saw this happening to a boy from Honey Grove. I'm very proud of it.

"I share this Meritorious Award with every director that has worked alongside of me and every student that has sat in front of me for 45 years." Whitley said.

Even though the 2016-2017 school year has not begun, the 320 members of the marching band are rehearsing daily. Whitley and his staff are preparing for another successful year at Whitehouse High School.

Best Advice he ever got: "Be yourself. It's hard to be someone you're not"

Advice to new band directors: "Be honest and sincere. Teach the kids as if they are your own kids"

WHAT WHITLEY'S ALUMNI HAVE TO SAY

"When I became a drum major, I watched Mr. Whitley closer, really seeing what all his job entailed. I saw how he was building long-lasting relationships with students and parents. He treated every student the same; everyone was equal in his eye. I knew I wanted to be just like him. I decided my junior year in high school to become a band director."

"Without a doubt, Mr. Whitley was the most influential presence in my formal education. For years I thought I was learning about quarter notes, marching drills and conducting. But,what he knows and knew all along is that with each interaction with each student, he was instilling pride, respect, discipline and faithfulness. There is not a day that goes by in my career, family life and spiritual life where I am not benefiting from the values, skills, and passion he lovingly ingrained in my character."

"Mr. Whitley is a shining example of how one person can shape the future of thousands of students. We are honored to celebrate the Meritorious Award with Mr. Whitley, his sweet wife, Regina, and the entire family. Denny Whitley's commitment to the Whitehouse High School band program for 27 of his 45 total years in public education is a testament to his love for music and students."