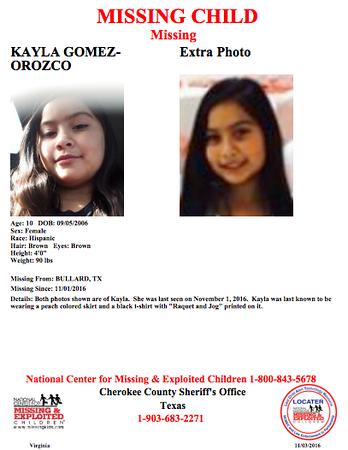 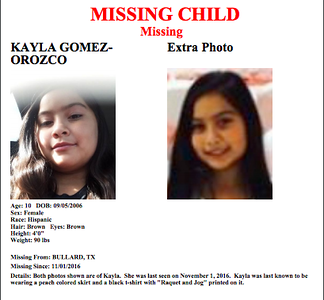 Two full days into the search for Kayla Gomez-Orozco, law enforcement officials said they remain optimistic she will be found as they continue their search efforts, bolstered by a $13,000 reward they hope will encourage tips that lead to the missing 10-year-old.

As many as 100 law enforcement officers from across the country continued to search Thursday for Kayla, who went missing after a Tuesday night church service in Bullard.

Campbell said officials are working every possible angle, though he declined to comment on specifics of the investigation.

“We are working on all the leads and doing homework, interviewing people,” Campbell said. “There’s lots of agencies and people involved in this. It’s the largest operation that I’ve seen since I’ve been sheriff (for 22 years). Everyone is pulling together and working together well.”

Law enforcement agencies, including the Smith and Cherokee County sheriff's offices, Bullard and Tyler police departments, Texas Rangers, Department of Public Safety, U.S. Marshals Service and the FBI, as well as area fire departments and constables, have been searching for Kayla since she was reported missing after a Tuesday evening church service at Bullard First Assembly church on U.S. Highway 69.

Officials hoped the announcement Thursday of a $13,000 reward offered by Cherokee County Crimestoppers would encourage people to call in tips that could lead to Kayla’s whereabouts.

Tips can be called in to Crimestoppers at 903-586-7867 or to the FBI tip line at 972-559-5711. The reward likely will grow as donations continue to come in to the account. Contributions can be made at any Austin Bank in the “Jacksonville Crimestoppers” account. Donors must make a note that the donation is for Kayla’s fund.

Campbell said law enforcement has received tips from the FBI line, but could not comment on how many. Officials said no tip is too small and all will be aggressively pursued.

Several locations were searched Tuesday night and, on Wednesday, search dogs from the Texas Department of Criminal Justice and a helicopter were brought in to help with the ground search. Those specialty units were not active on Thursday.

However, the ALERT Academy, or Air, Land, Emergency Response Team, was in Bullard on Thursday conducting a ground search. Jesse Boulden, an instructor for the academy, said they focused on the area near Bullard First Assembly church to ensure she wasn’t overlooked in nearby fields and wooded areas.

Boulden said the group, a nonprofit organization based in Big Sandy, uses what it calls a loose grid search where a group of people line up to methodically search an area. Boulden said he has not been told if they will be needed to search other areas.

Kayla, a fourth-grader at Jack Elementary School in Tyler, is 4-feet tall and weighs 90 pounds. She has waist-length brown hair and brown eyes, and was wearing a black Racquet and Jog shirt, a peach skirt and black shoes when she disappeared.

“We are checking every tip we get, talking to lots of people, going door-to-door and taking advantage of all the resources and the FBI and Texas Department of Public Safety have provided,” Campbell said.

The sheriff said parents should be cautious of their surroundings, but urged that right now they are working a missing person case.