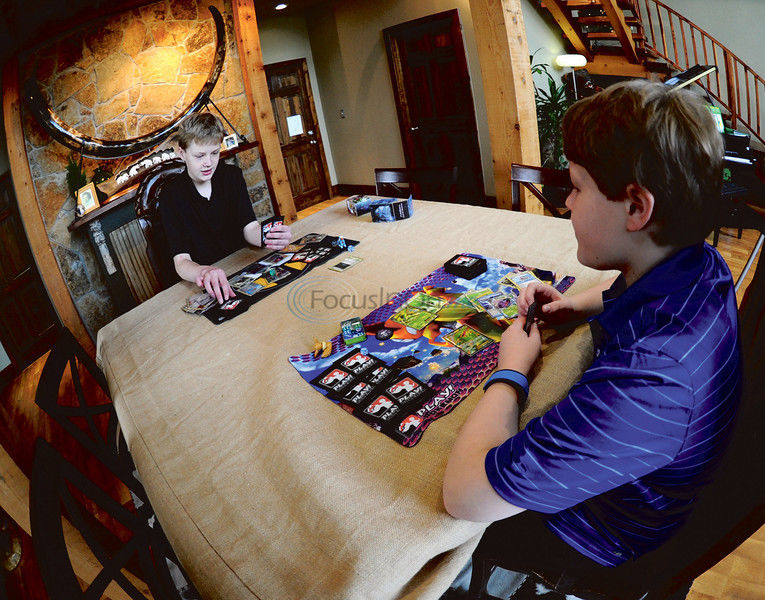 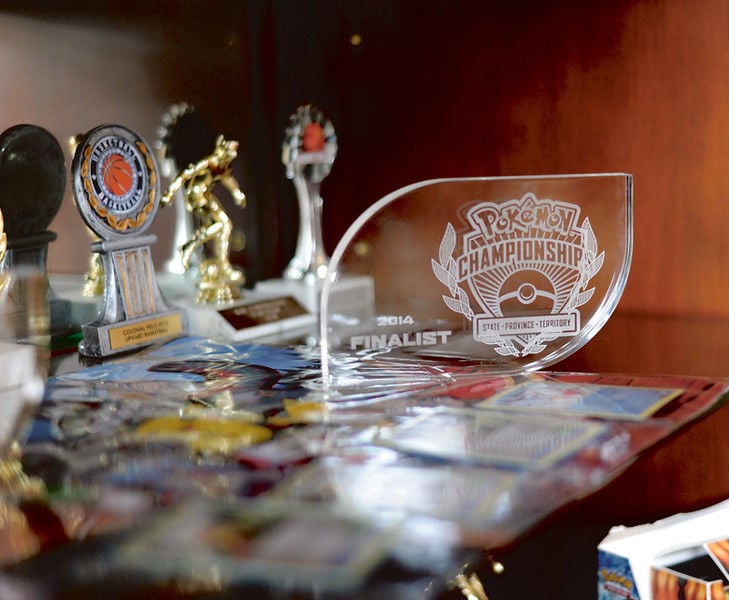 Luke's trophy sits on a trophy case in his home. (Victor Texcucano/Staff) 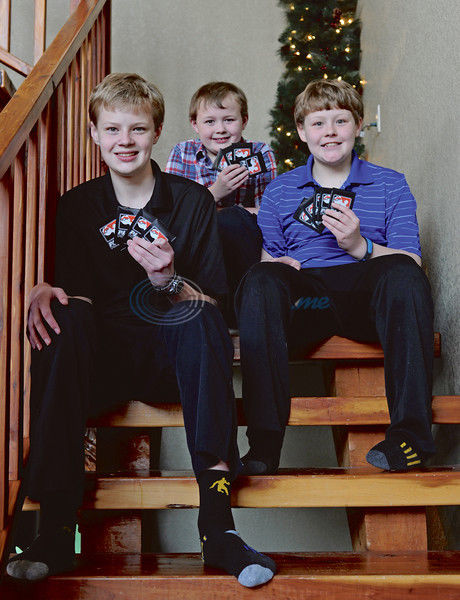 Luke Cunningham (left), 13, sits on a staircase in his home with his brothers, Sam (right), 11, and Hatch (middle), 9. Luke recently clinched first place at the 2014 Pokemon TCG (Trading Card Game) State Championships in Hot Springs, Ark. He and his brothers all compete in the trading card game. (Victor Texcucano/Staff)

Luke's trophy sits on a trophy case in his home. (Victor Texcucano/Staff)

Luke Cunningham (left), 13, sits on a staircase in his home with his brothers, Sam (right), 11, and Hatch (middle), 9. Luke recently clinched first place at the 2014 Pokemon TCG (Trading Card Game) State Championships in Hot Springs, Ark. He and his brothers all compete in the trading card game. (Victor Texcucano/Staff)

WHITEHOUSE — A Whitehouse teen won a state championship for a popular video game-themed card game and is heading to the national championships.

Luke Cunningham, 13, of Whitehouse, was deemed Pok￩mon state champion in an Arkansas tournament earlier this month. The win scores him a guaranteed seat in the national competition and gives him a shot at world competition.

"I won by a long shot I got really lucky," the quiet teenager said.

Pok￩mon is a popular animated series, video game and card game featuring fictional creatures of all shapes and sizes who battle one another with their special powers at the command of a handler (or trainer), according to the brand's website.

There are more than 700 different creatures with their own names, special abilities and traits.

Luke said he got into it three years ago when his aunt bought him his first set of cards. He really enjoyed the game and began looking up strategies and card combinations that would bring him to the top.

"I got into Pok￩mon in the first place to have something to compete in, and you make a lot of friends in Pok￩mon, but not everyone you meet is really nice — there are some people who make the game sour," Luke said.

His effort piqued the interest of his two brothers, 11-year-old Sam and 9-year-old Hatch, and all three play against one another and attend tournaments.

"We are all about even, and we can beat each other," Luke said.

Ariana Cunningham, the boys' mother, said her sons are each very good at the game, but Hatch and Luke have a friendly competition going. Each wants to garner enough competition points to go to nationals first.

"I really like the fact that he took on something and he learned it himself without a lot of help," Mrs. Cunningham said. "He worked very hard at it without mom and dad."

The Cunninghams said the game is difficult to master and has a lot of rules.

Each player starts with a deck of 60 cards — including the Pok￩mon character cards, energy cards and items that help weaken the opponent or strengthen the character.

Each then picks seven cards to play from and six "prize cards," which the opponent wins by defeating the Pok￩mon characters.

Each player can only have seven cards in their hand at once and attempts to strengthen the characters' defense and attack to beat the opposing characters.

There are three ways to win — by winning all of the prize cards, by making the opponent run out of cards or lack a character card to play.

Tournaments are set up across the country, and each player competes for points. The number of points each receives count toward earning a spot in the national or world competitions. Luke won an automatic spot in the nationals for winning the top spot in Arkansas.

Luke and he already started competing for the competition, which will get started in a few months, and his brothers are working to earn a spot to go with him.

"The state competitors were an exceptional group this year and we look forward to watching as they continue to compete on the path to the 2014 Pok￩mon World Championships," said J.C. Smith, director of consumer marketing for The Pok￩mon Company International.