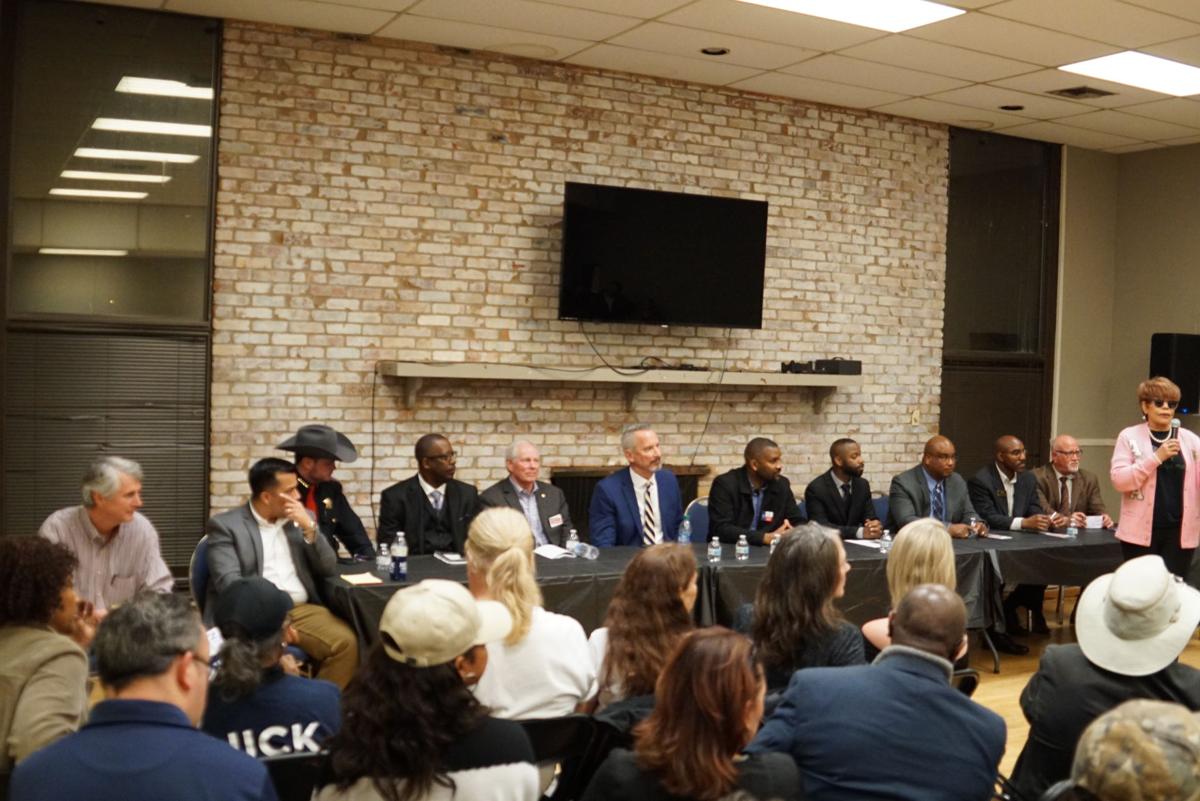 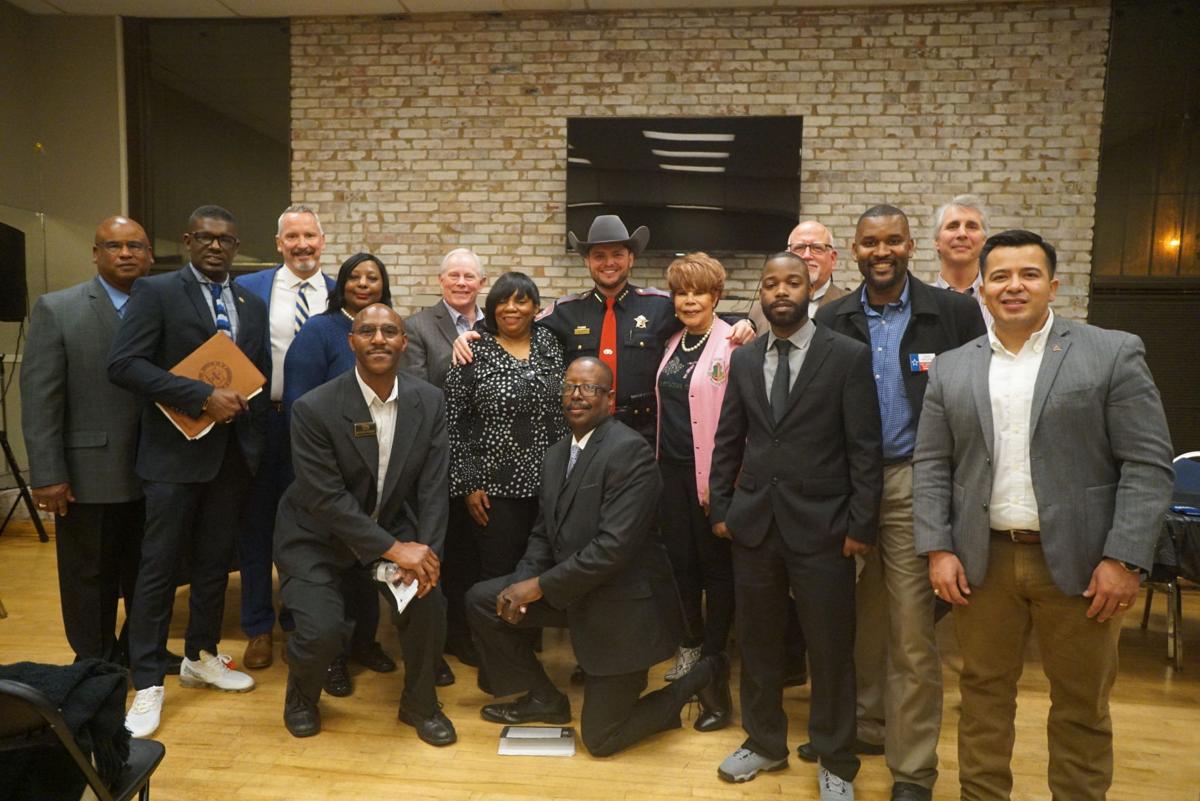 Local candidates for public office pose for a picture with forum sponsors from NAACP Tyler and Black Nurses Rock at the Tyler Metro Chamber of Commerce.

Local candidates for public office pose for a picture with forum sponsors from NAACP Tyler and Black Nurses Rock at the Tyler Metro Chamber of Commerce.

Collaboration and experience were some of the qualities discussed among city, county and federal candidates at a forum hosted by the NAACP Tyler and Black Nurses Rock.

For city of Tyler races, the filing period for candidates begins Wednesday and continues until Feb. 14. The election will be May 2, and early voting runs from April 20 to 28.

In Smith County races, the Republican and Democratic primaries are March 3. The last day for voter registration for the primary is Feb. 3. Early voting starts Feb. 18.

There are three Democratic candidates running for constable in Precinct 1: Constable Bobby Garmon, who was appointed to the post; Precinct 1 constable’s deputy Willie Mims; and Texas Juvenile Justice Department corrections officer Curtis Traylor Harris. No Republicans have filed to run for the seat.

Garmon was appointed in 2017 after the previous occupant of the office, Henry Phillip Jackson, was sentenced to six months in federal prison for income tax evasion.

Garmon said he has about 40 years experience in law enforcement, including 33 years at the Smith County Sheriff’s Office.

“People in the precinct asked me to run for the job because they were tired about seeing the negative about constable Precinct 1,” he said. “So they wanted somebody that was qualified to run the office.”

Garmon said when he came into office there were no radios in the cars and the vehicles were not marked. He’s now ordered laptops for the cars.

Garmon said he favors community policing, such as patrolling neighborhood areas, but the constable’s office should not be locking up swimming pools and laundry rooms. Garmon ended the practice of having Precinct 1 deputies monitor apartment complexes in Tyler. The program started under Jackson, but Garmon allowed the contracts with two remaining security complexes to expire.

“I would have community policing for the whole precinct,” he said. “I don’t think that the department should be under the contract to be a community policeman.”

Garmon said he filed a lawsuit to remove Mims from the ballot because candidates should follow the rules. His lawsuit questions the validity of the required signatures on Mims’ candidate application.

Mims, a lifelong Tyler resident, said he’s running for constable because of his love for the community. He has been a Precinct 1 constable deputy since 2005.

“This community has stood behind me for many years and I want y’all to continue to stand behind me. I know y’all will,” Mims said. “I’m the constable for the people. I’m a constable y’all can trust.”

He said the driving force of what made him run is what was done to Jackson.

He is in favor of bringing back the office’s community policing program. He said he will start the program back if the commissioners court allows it.

“Everybody doesn’t have to go to jail,” Mims said. “When they call us first, we go out, we talk to them, educate them and involve them in what’s going on.”

He added that there’s a need to increase manpower within the department.

Harris, who has been a corrections officer since 2007, said he hopes to add professionalism to the position.

“I’m in the race because Precinct 1 constable’s office has lacked professionalism for a very long time,” Harris said. “I am removed from both administrations. Precinct 1 is need of a complete revamp.”

He wants to add a comprehensive internship for young people interested in law enforcement to be a change for the future.

He also wants to bring back the community policing program, but not based on contracts. The office would patrol and do security for public events, neighborhoods and school zones, Harris said.

“I’m running for community engagement. What’s lacking in the constable’s office has been how we reach out to the youth in this community.”

He also wants to fight human trafficking and have a woman as second in command.

District 4 includes neighborhoods in the eastern part of downtown, the Azalea District, the Brick Street District, the hospital district and Tyler Junior College, among others.

At the forum, Pesina emphasized the need to adjust for the continued growth in Tyler. He believes being on City Council will bring a fresh perspective that hasn’t been there in a long time.

“This race is about the future. We have the opportunity to change the course of Tyler,” Pesina said. “It’s about the continued growth because whether we like or not, Tyler is growing. And with that growth comes challenges and with challenges comes opportunities.”

He also wants to innovate the city’s Half Cent Sales Tax Board, invest in infrastructure and bring opportunities to Tyler residents.

“We’ve got so much that’s here,” he said. “We’ve got to give those college students a reason to stay here.”

Wynne told attendees he has the time and business experience for City Council.

Joplin, who has been in the role since 2017, is running for reelection. He was the only candidate in the race to attend the forum.

He said the office has become more involved in the community for everybody in the precinct, instead of the people who are involved in certain political areas.

Patrolling in the area and the school zones and manpower has increased under his administration, Joplin said. He also told guests he is a lifelong resident of Precinct 4.

Joplin said he knows what is needed to make positive changes.

He said his opponents want to go back to an 8 a.m. to 5 p.m. Monday through Friday office schedule serving papers and being a bailiff in court.

“I’m the only constable in the county that provides a deputy full time at night until 2 a.m.,” he said. “I work hard for my people. I take care of my people because I’m one of the people and I’m from that community.”

Tolbert has been chair since the 2016 general election. He said Democrats have the opportunity to be competitive and win in 2020.

“The thing that distinguishes the Democratic Party is that we are advocating so that everyone can live up to their fullest potential,” he said.

Tolbert said he’s been involved in politics since middle school. He learned the only way to create change was to get people elected.

“The most powerful thing we have is information and I have experience in using that information to get results,” Tolbert said.

He claimed that Walton didn’t vote in the 2018 election; however, Walton responded by saying he’s always voted.

“In order to make a difference, we must be the difference,” Walton said. “My focus is on getting the voters out. There’s things in our party that need to change. I have the leadership and ability to get it done.”

He added that the hostile environment within the Democratic Party has to change.

He emphasized the need for county precinct chair seats to be filled.

“We have to make sure all voices are heard,” Walton said. “If you need someone, I’m there.”

The Republican candidates for this seat are incumbent Terry Phillips and Tyler District 5 City Councilman Bob Westbrook. Laura Alexander is the Democratic candidate.

Westbrook was the only candidate to attend the forum. He emphasized his experience on City Council and business ownership and the need for collaboration.

“The first thing you’ve got to do is show up,” Westbrook said.

He’s been making the rounds and seeing that the biggest concerns are road and bridge, first responders and law enforcement, but also wastewater treatment due to growth.

“You can’t have those conversations unless you’ve been exposed to them,” he said. “It’s (county commissioner’s job) about the collaborations that you bring together to solve the bigger questions.”

He said there’s a need to prepare for the growth within Tyler and Smith County.

The Republican candidates for this seat are Neal J. Franklin, Pam Frederick and Paul Perryman. The Democratic candidate is Peter Milne. Incumbent Jeff Warr is not running for reelection. Franklin and Milne attended the candidate event.

Franklin said he brings his many years of experience as Tyler fire chief and general manager of East Texas Medical Center EMS. He now works in strategic planning and with multimillion-dollar budgets.

He said there’s a need for a fully staffed Smith County Jail. He noted the need for mental health help within the jail.

“The jail right now is full of mental health patients, where their only issue is mental health. We’ve got to get them the help they need, but it’s not in the jail,” Franklin said. “It’s not in the emergency room and we don’t need our law enforcement officials always taking their time out for them.”

He also wants more collaboration between the county and the city of Tyler.

Milne said he has experience in budgets, roads and infrastructure. He’s worked as a business and tax attorney and engineering and mining geologist, and is a United States Navy veteran.

As an attorney who has represented indigent parents and children, he said the county needs a public defender’s office.

“It makes fiscal sense to have a public defender’s office,” Milne said. “From a justice standpoint, it makes more sense to have your attorneys working out of the same office.”

Hank Gilbert, who is running as a Democrat against Rep. Louie Gohmert, told attendees East Texas needs someone who will represent everyone.

“My idea of a representative is someone who represents all the people, regardless of political party, race, creed, sexual orientation, religion or lack thereof,” Gilbert said. “What we have now doesn’t represent that. He doesn’t represent anybody in this room.”

Gilbert said the 12 counties in East Texas need infrastructure dollars and everything the region can get to grow. He wants to put the focus on America and away from partisanship.

“This country needs to come together and we need someone in Congress representing this district that can work across party lines (and) that can work with members of each party,” he said.

Smith County Precinct 3 Commissioner Terry Phillips is going to have to fight to keep his seat for another term.

“When he had received the drink, Jesus said, ‘It is finished.’ With that, he bowed his head and gave up his spirit.”