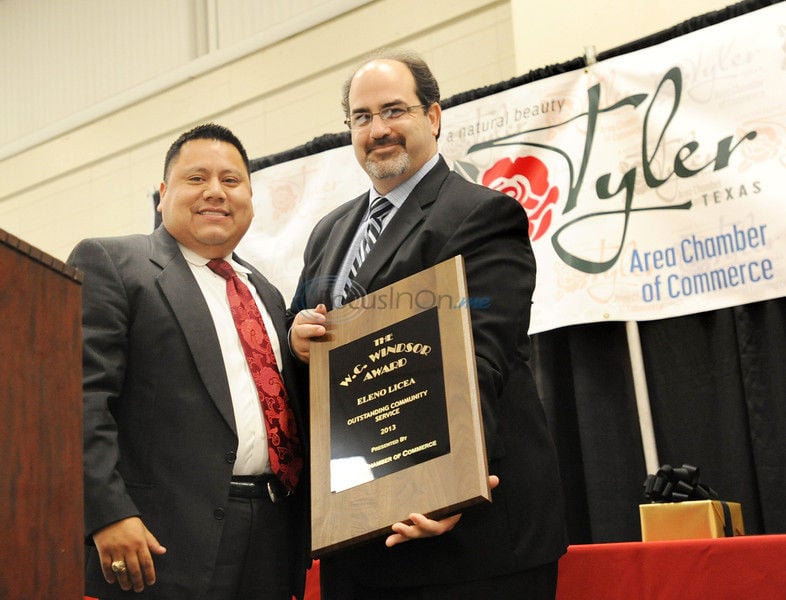 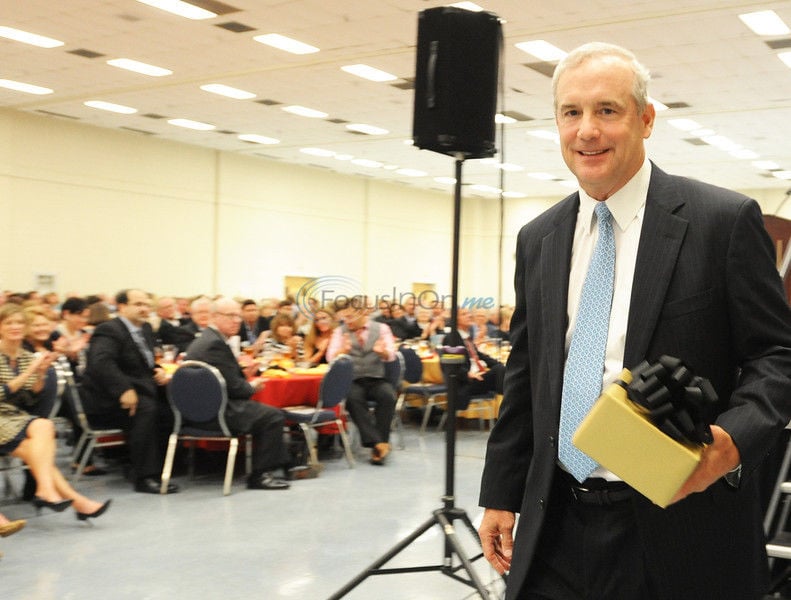 Brad Brookshire leaves the dais after acceptihg the 2013 T.B. Butler Award for Tyler's Most Outstanding Citizens given to the Brookshire Grocery Company at "An Evening in Rose City," the 2013 Tyler Area Chamber of Commerce Annual Meeting at Harvey Convention Center Tuesday night. Herb Nygren Jr 100113

Brad Brookshire leaves the dais after acceptihg the 2013 T.B. Butler Award for Tyler's Most Outstanding Citizens given to the Brookshire Grocery Company at "An Evening in Rose City," the 2013 Tyler Area Chamber of Commerce Annual Meeting at Harvey Convention Center Tuesday night. Herb Nygren Jr 100113

Brookshire Grocery Co. was honored Tuesday night with the T.B. Butler Award as Tyler's most outstanding citizen of 2012.

The 85-year-old company received the award at the Tyler Area Chamber of Commerce's Annual Meeting, An Evening in Rose City, attended by a sold-out record crowd of about 600 people at the Harvey Convention Center.

"This year's T.B. Butler Award recipients truly meet the test of the best attributes of leadership, generosity and focus of purpose," Nelson Clyde, publisher of the Tyler Morning Telegraph and president of the T.B. Butler Publishing Co., said. "Our recipient has called Tyler home for many generations. The impact it has had on the daily lives of Tylerites may arguably be the most consistent and necessary of any longtime member of the community."

"It has been a privilege for our family to present this award each year at the Tyler Area Chamber of Commerce banquet to encourage aspirations of leadership, contributions of citizenship and to recognize significant acts of service," Clyde said.

This year there was something that stood out that Clyde said he hopes is an encouragement to other individuals and organizations to emulate the selflessness and community spirit behind this year's selection.

With its World War II Heroes Flights, Brookshire Grocery Co. has taken 195 World War II veterans to Washington D.C. to tour the capitol and World War II memorial. The company will soon leave again with its seventh trip. These flights are complimentary to the veterans and the company's management team, staff and shareholders have been front and center to push wheelchairs and put these veterans in a place of honor, Clyde said, adding that the program is exemplary.

Brookshire Grocery Co.'s Chairman of the Board Brad Brookshire said the company started the Heroes Flights in 2010.

"World War II veterans are our greatest generation and they are our true heroes," he said. "To be there with them, hear their stories … it's something special."

Brookshire said 99.9 percent of the veterans have never seen the World War II memorial built in 2004 and "it's our country's way of honoring them."

Brookshire said the company has been in business for 85 years because his grandfather believed in having the very best people.

"This is a special award," he said. "On behalf of our many partners, employees at Brookshire Grocery Company, we are honored to accept this award."

Brad Brookshire's grandfather, Wood T. Brookshire, opened a small store on Sept. 1, 1928 in downtown Tyler. By 1939, there were three stores in Tyler and in the 1940s, he added stores in neighborhood communities.

In 1961, Brookshire's had two stores open in Shreveport. A 175,000-square-foot distribution center opened in Tyler to better accommodate a growing number of stores. The most popular addition of the 1970s was a wildlife museum at the corporate offices, with animals the Brookshires brought from safaris in Africa.

The first Arkansas store opened in 1978. Brookshire's and its employees survive the recession of the 1980s and even managed to add some stores and double to size of its distribution center. Healthy growth continued in the 1990s, with the purchase of a dairy plant in Tyler, a distribution facility in Monroe, La., another office and warehousing complex north of Tyler and further expansion of the company's headquarters. A plant began manufacturing Goldenbrook Farms ice cream in 1997.

Brookshire Grocery Co. has 119 supermarkets in Texas, Louisiana and Arkansas, as well as FRESH by Brookshire's in Tyler. The supermarkets include Brookshire's, Super 1 Foods and Ole Foods. The business also has three Express Lane and one Zippy B convenience store. There are 117 pharmacies, 86 fuel centers, 13,800 employees, or partners, and several distribution and manufacturing facilities.

Brookshire Grocery Co. is engaged with local communities through the Community Connections program. Partners volunteered have logged in 38,000 hours so far in 2013, assisting schools and nonprofit groups. It hosts the Spirit of Christmas Food Drive and in 2013, Brookshire's Benefit Golf Tournament raised a record-breaking $440,000 for children's charities.

"This is so unbelievable … this is something I never dreamed of," Licea said. "People talk about the American dream … I'm living it every single day."

Past W.C. Windsor Award recipient Neal Katz presented him with the award.

The W.C. Windsor Award is presented in conjunction with the W.C. Windsor family to honor an outstanding Tyler citizen younger than 40. The award was started in 1952 by the late W.C. Windsor with the purpose of encouraging leadership and community service among young people.

"This person is an example of why our community is so strong now and why we should be so optimistic for our future," Katz said of Licea. "It is people like this who give us pride in our community.

Licea, 36, owner of the Licea Insurance Group, came to the U.S. from Mexico as a young child with his parents and seven siblings. He attended Tyler Junior College and The University of Texas at Tyler, where he was the first in his family to obtain a degree. He completed the MBA's School of Mortgage Banking in 2007, and holds active real estate, securities, insurance and mortgage banking licenses. He began his career as a mortgage lending officer at Southside Bank and in 2008, started his own business as an insurance agent. He has been asked by several groups to serve as a mentor to people starting their careers and/or businesses.

He played a key role in the formation and initial operation of the Hispanic Business Alliance and has served as its chairman. He was presented the Knight of Nobility Award from the Junior League of Tyler in 2006. Licea also was named the 2004 U.S. Small Business Administration Dallas/Fort Worth Region Minority Business Champion first runner up.

"God has blessed me," Licea said. "God bless this country. I love it."

The Large Business of the Year Award was accepted by John Soules Foods Inc. The home grown company has become the largest beef and chicken fajita brand in the U.S., with a retail shelf presence at more than 17,000 stores in 50 states.

"We're very excited to be here … we're always excited to be a part of the Tyler community," John Soules Jr., president and co-chief executive officer, said.

He said their employees are second to none and have put the company in the position it is in today.

John Soules Sr. said "you can't create something out of nothing. You have to do it with hard work." Who would have ever dreamed the little company that started in a 12-by-12 building would be able to achieve what it has been able to do, he asked.

"This is a great award but the greatest reward we've had is to be a business in East Texas and Tyler," he said.

The company began operations in Tyler as Country Jim's Meats in 1974. The name was changed to John Soules Foods Inc. in 1984. The company has expanded several times through the years. Sales revenue for 2013 is on pace to exceed $185 million and they have more than 500 employees. Its major retail customers include Wal-Mart, Sam's Club, Kroger, Brookshire's and Albertson's.

The Small Business of the Year Award was received by Jim Toman Insurance. The independent insurance agency in Tyler represents more than a dozen insurance companies. Jim Toman has been in the insurance business for 30 years. He started in 1984 with Allstate in Houston and in 2002, moved to Tyler and purchased an Allstate agency, which he sold in 2007 to start the independent agency.

"To all of you I say thank you," Toman said. "This is an honor I will always cherish."

The Tyler Chamber's Volunteer of the Year Award was presented to Ed Thompson, of North Chase Development, for giving unselfishly of his time and talents to promote the mission and work for the Chamber. Thompson was unable to attend the event.

Cindy Smoak received the Mary Howes Award, which was created to honor a contact club member who showed outstanding performance in membership development, has been a member of the club for at least three years and achieved a minimum of five production awards.

Ms. Smoak, who has earned 24 production awards, said selling the Tyler Chamber is probably one of the easiest thing's she has ever done.

"The story takes you across our city and many of the sites and programs that have become a reality because of the private, public and business partnerships in our community – often led many times by volunteers," she said.

The books were on sale at the event and 100 percent of the book's proceeds will go to community programs. "This reinvestment level is a first in our country for such a project and one that you will be hearing more about," Mrs. Jackson said.

The membership meeting and banquet highlighted the accomplishments of the Tyler Chamber's fiscal year ending Sept. 30.

Mrs. Jackson, outgoing chairwoman, was given a plaque for her year of service after introducing incoming Chairwoman Rosemary Jones.

Chairman-elect Charles Hill, as well as the Chamber's new officers, council chairmen and directors for 2013-14, were also introduced. Seven board members who retired after three years of serving were recognized.