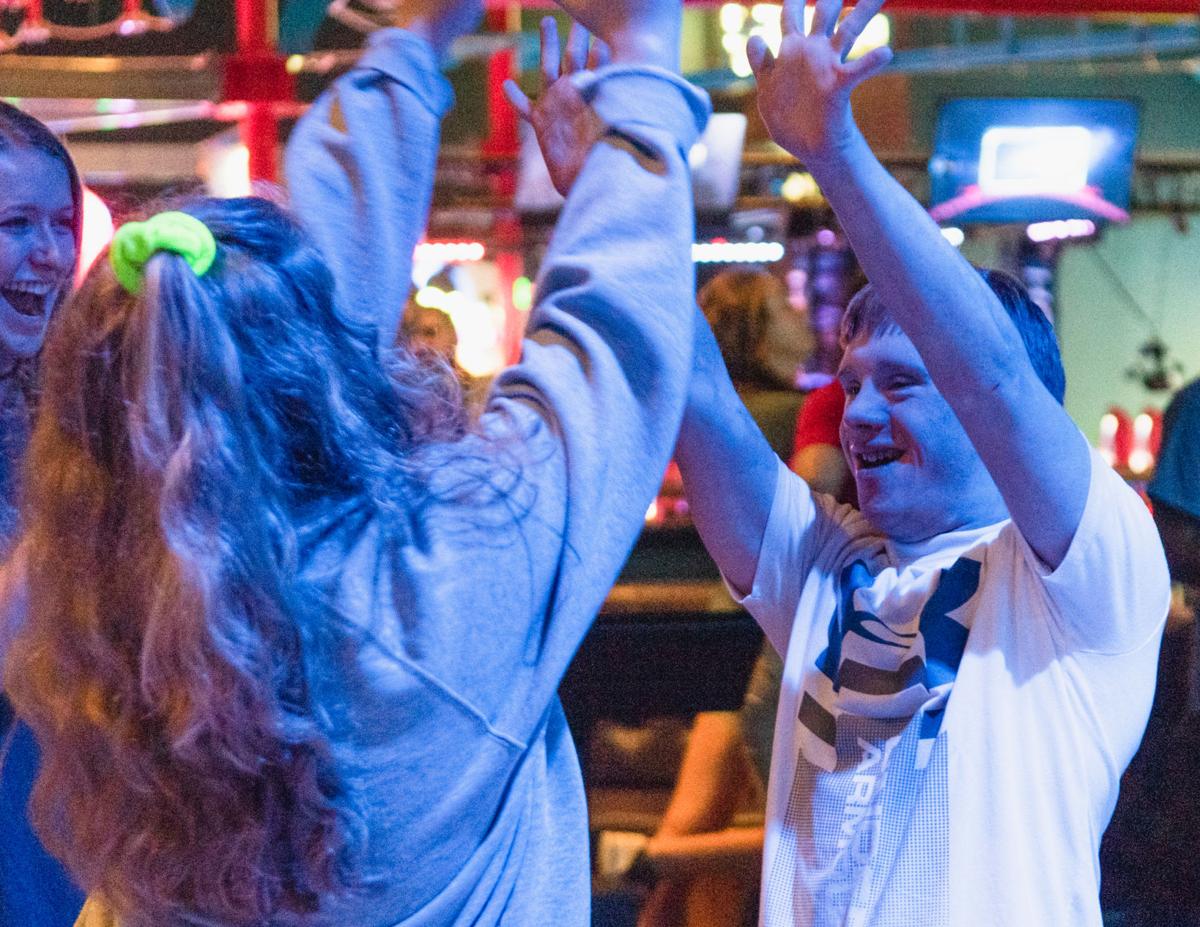 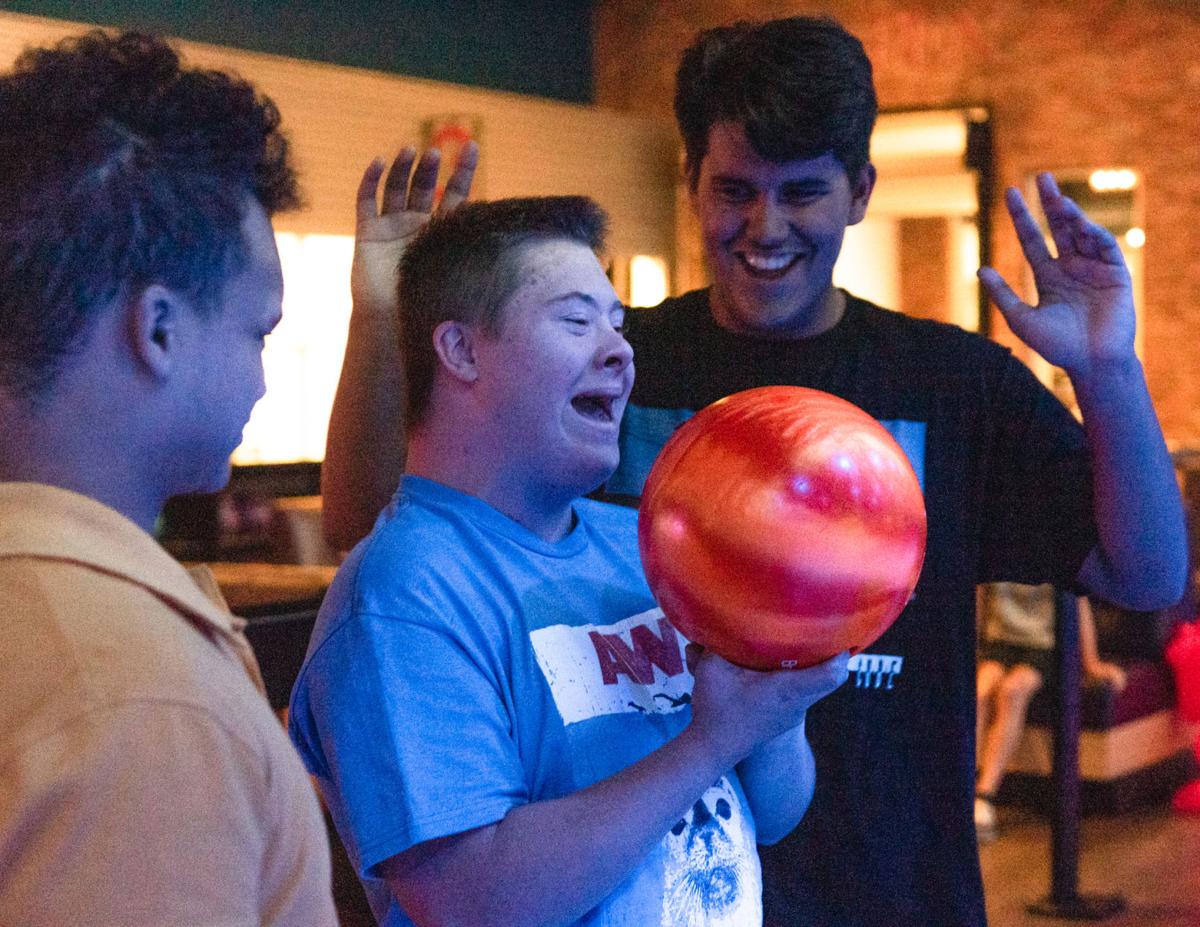 Thursday at Times Square Grand Slam bowling alley in Tyler. The event was a social kickoff for Lee’s Best Buddies organization, a program where students learn to build one-to-one friendships with fellow classmates who have intellectual and 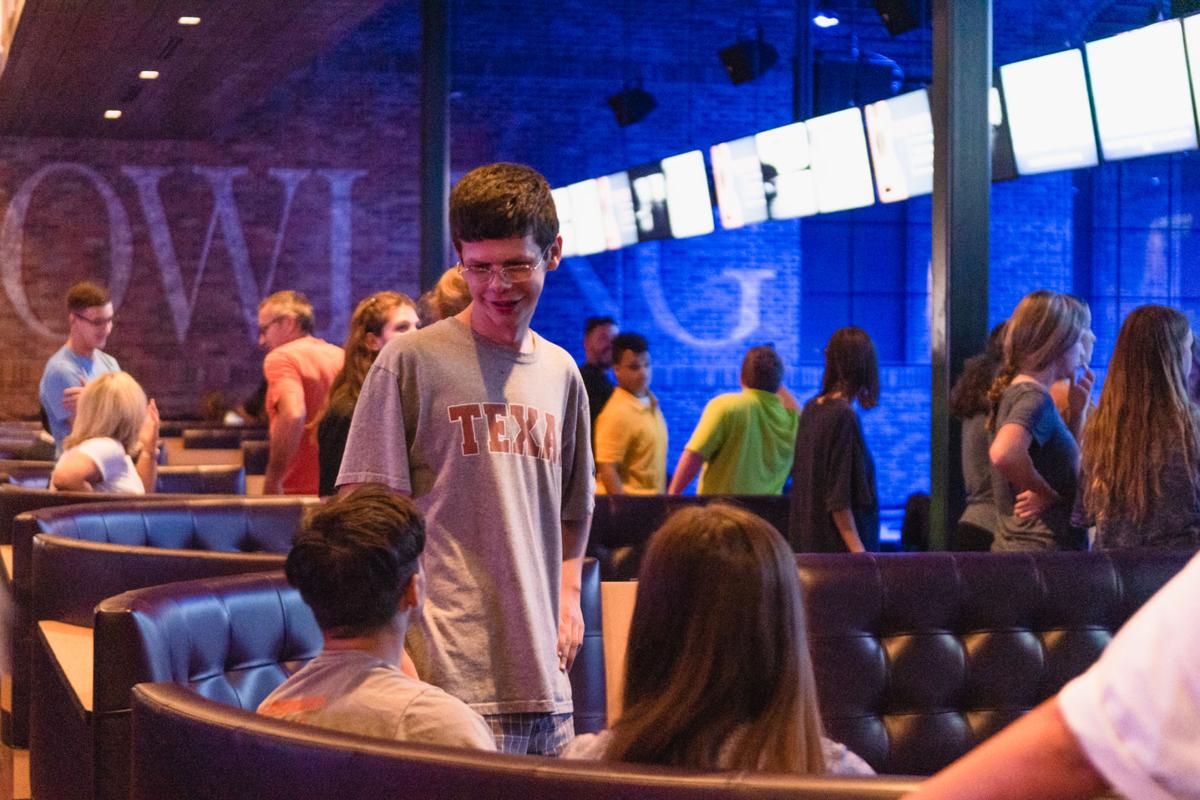 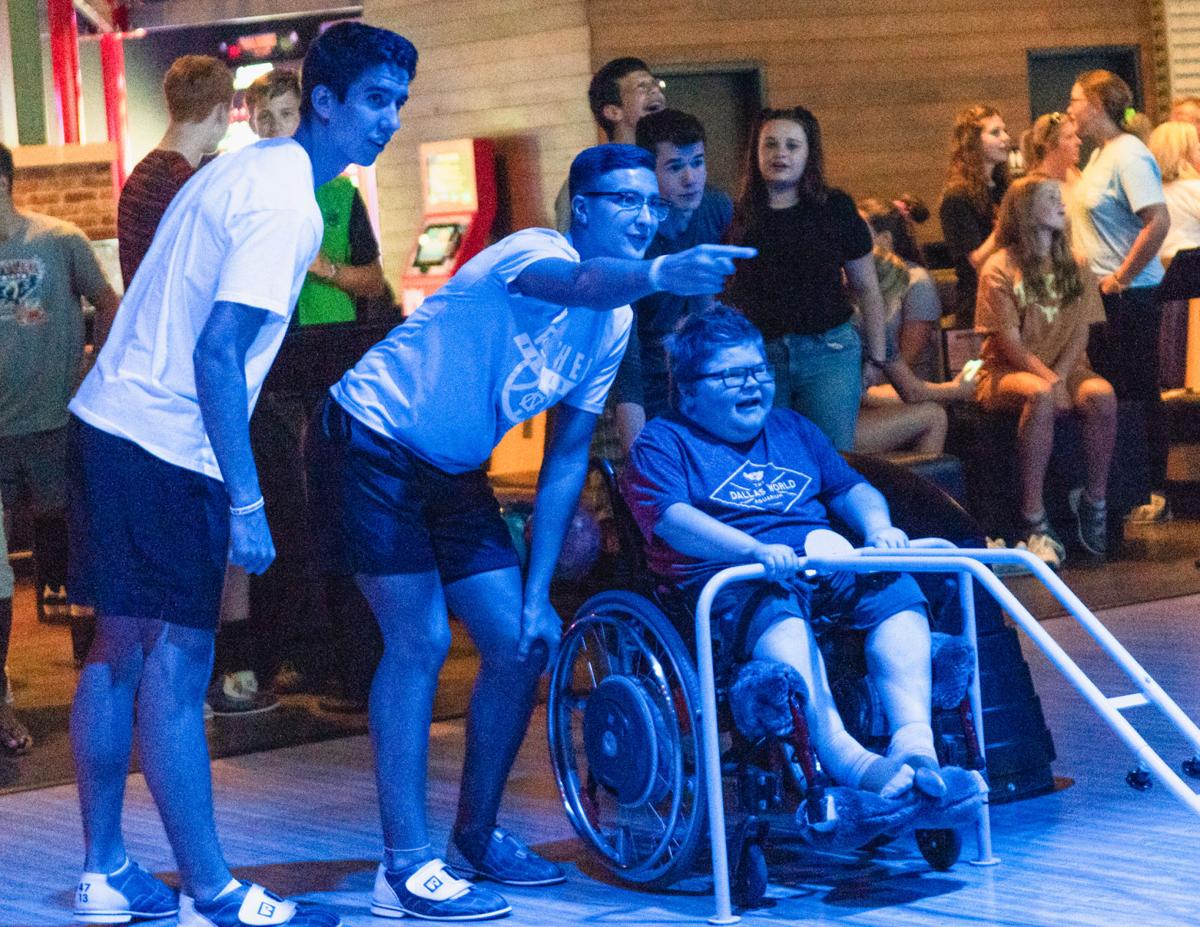 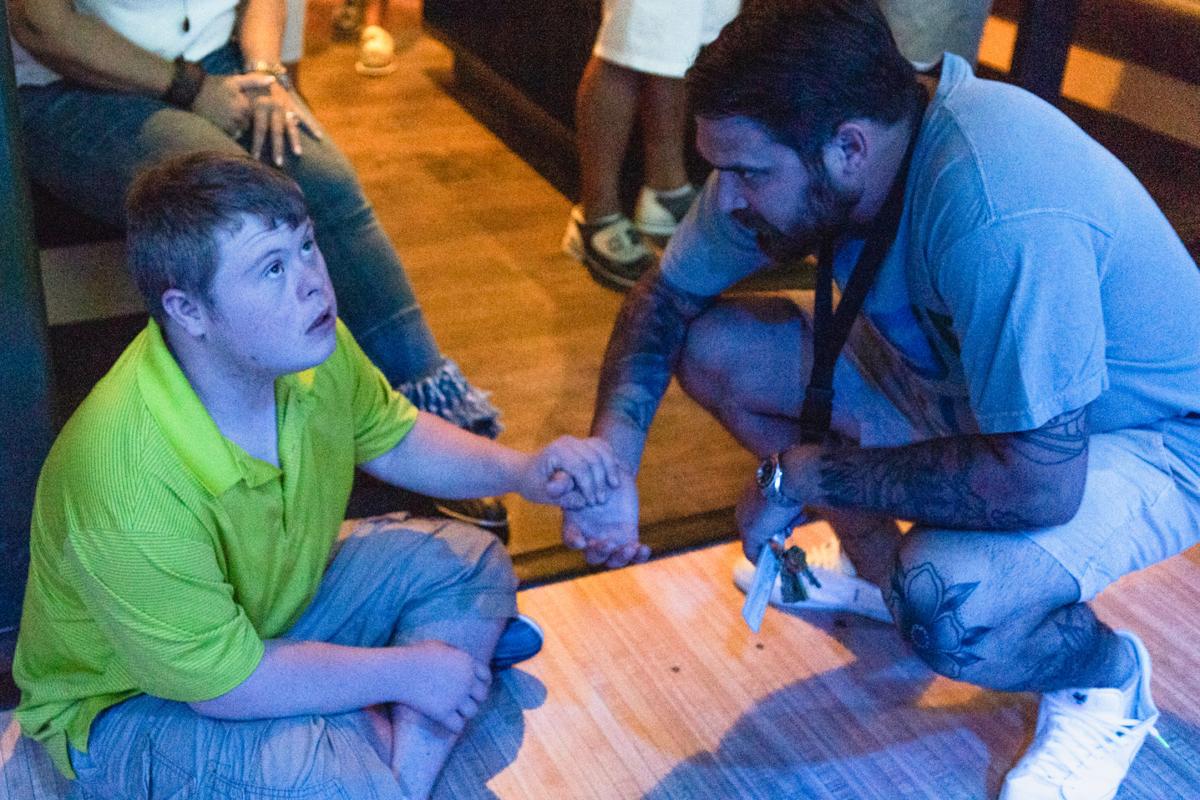 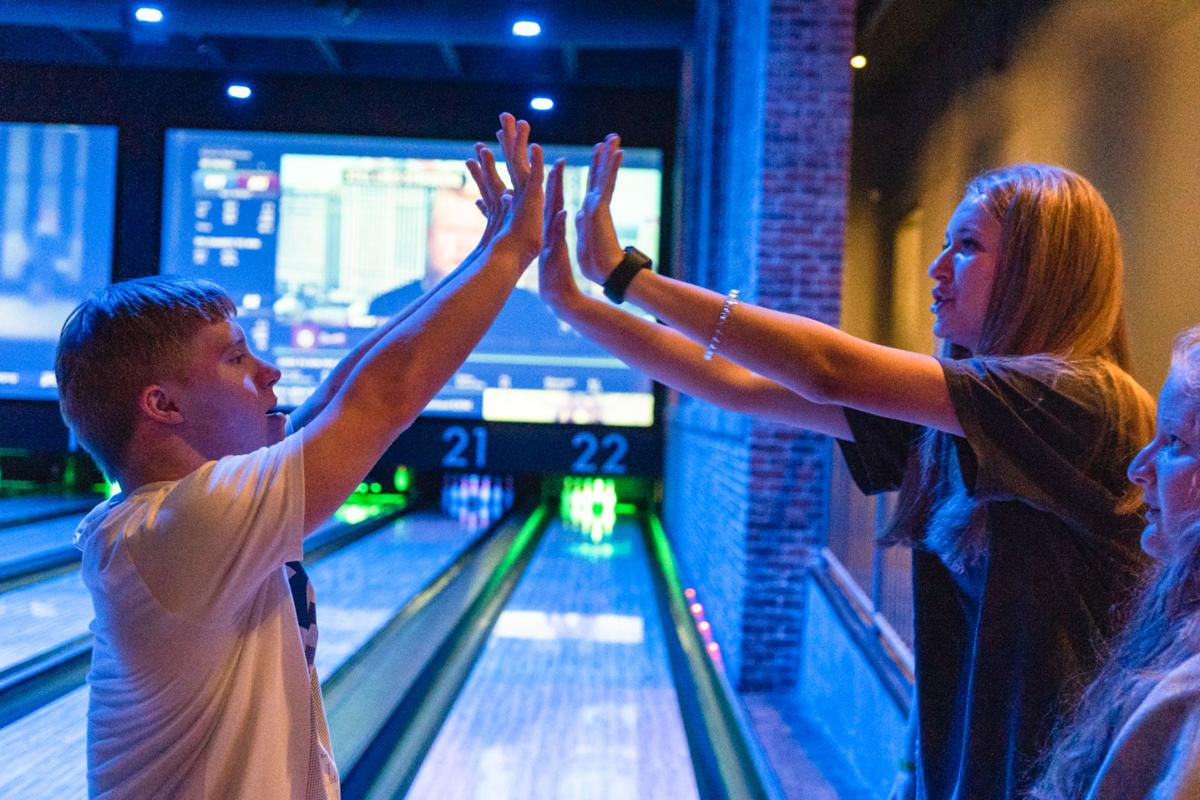 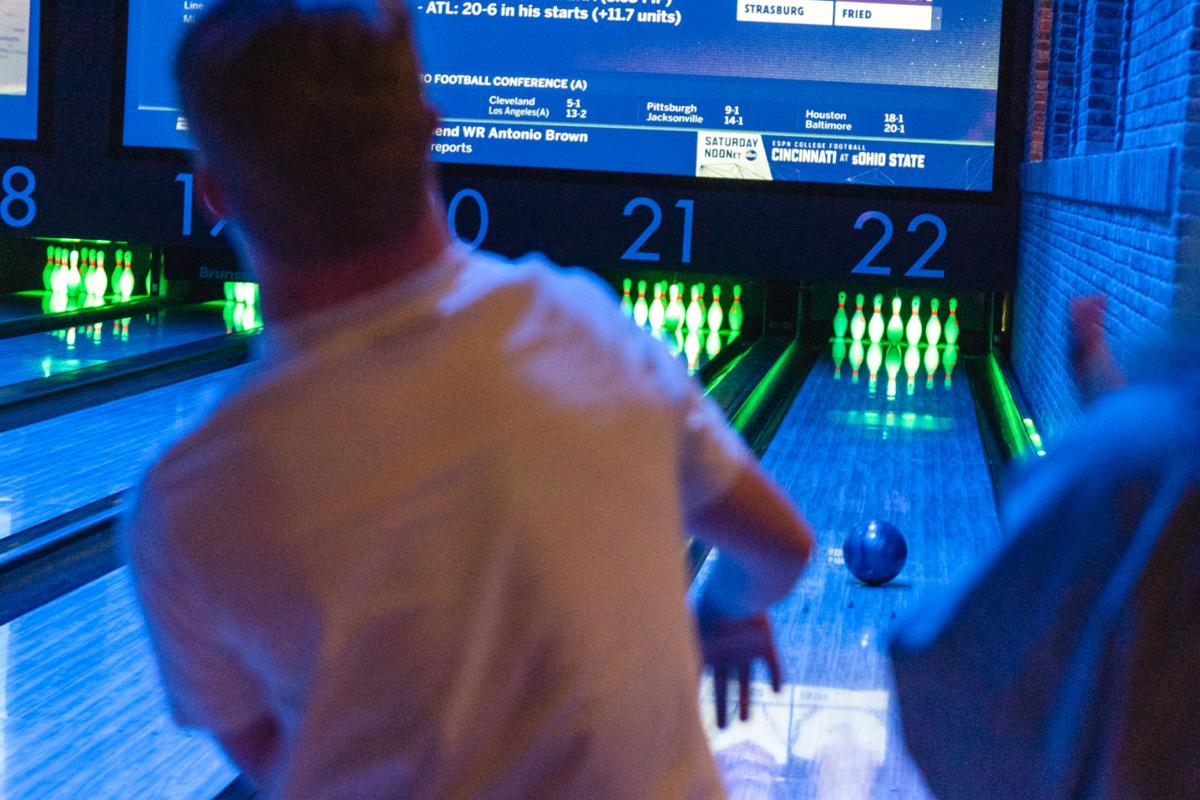 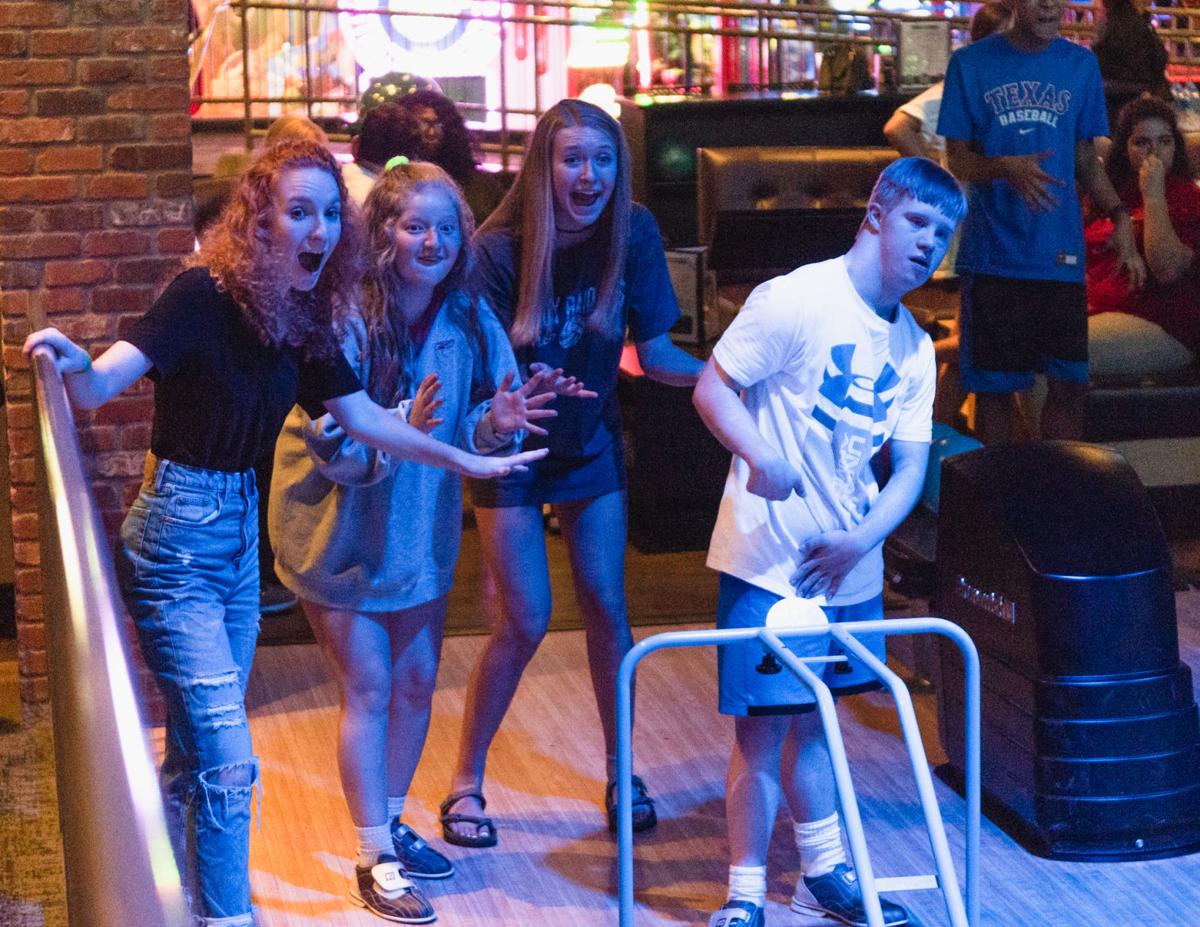 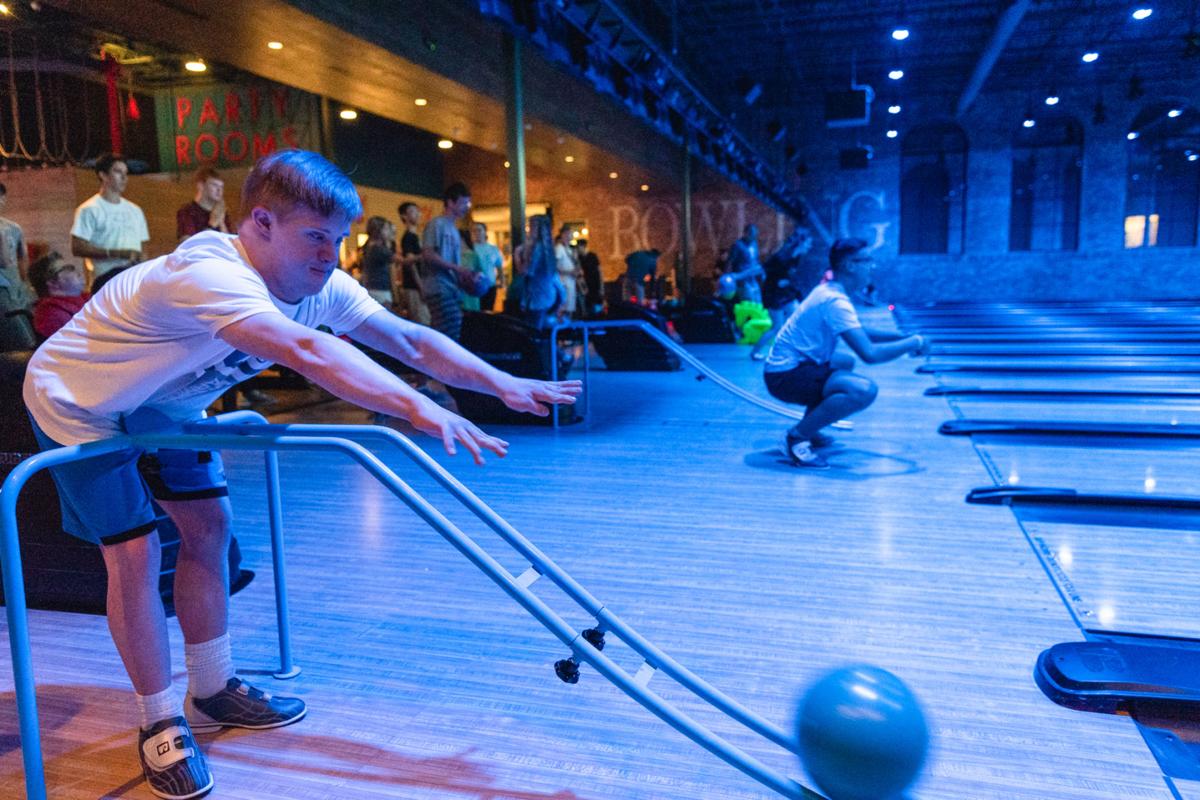 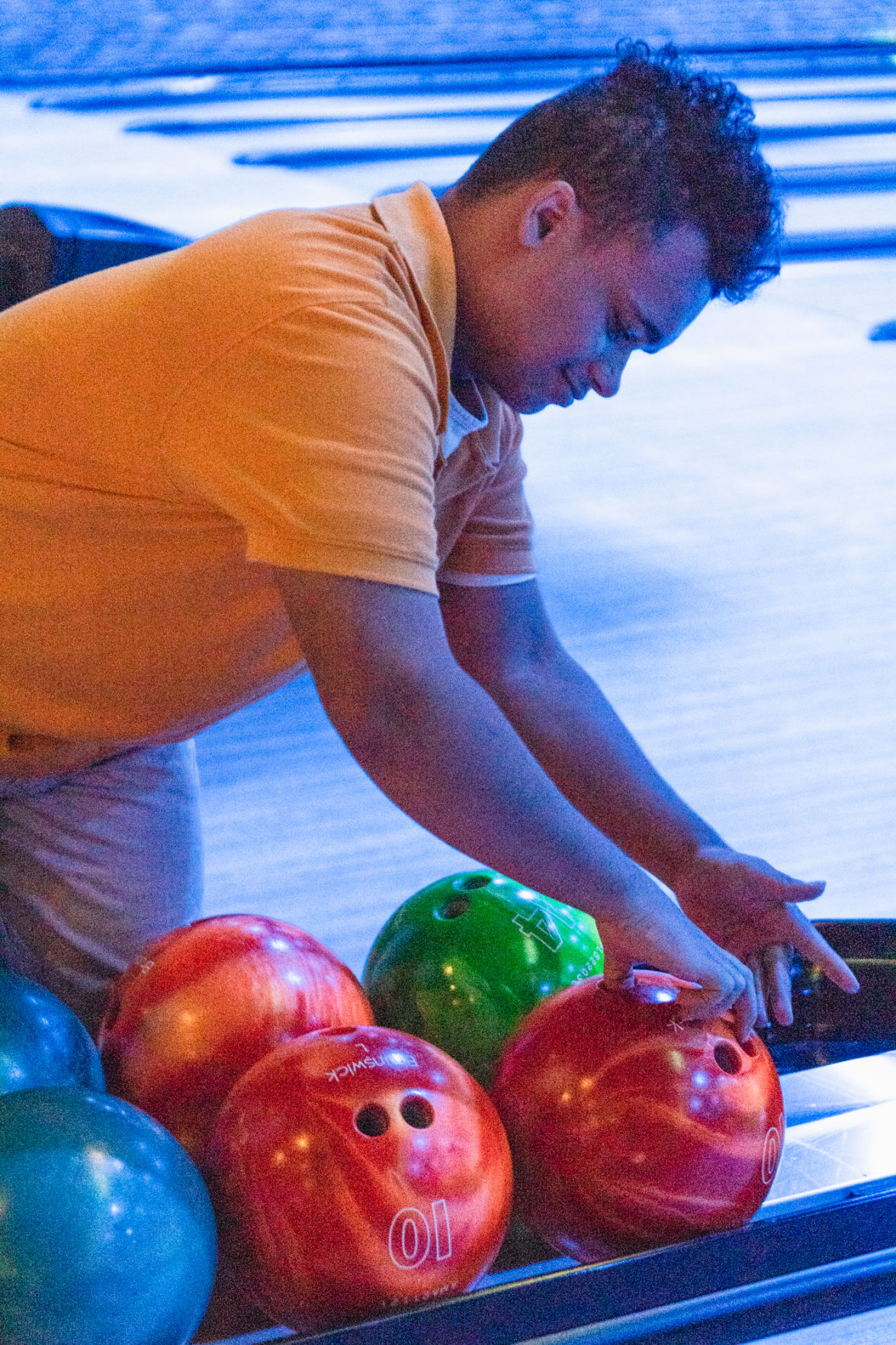 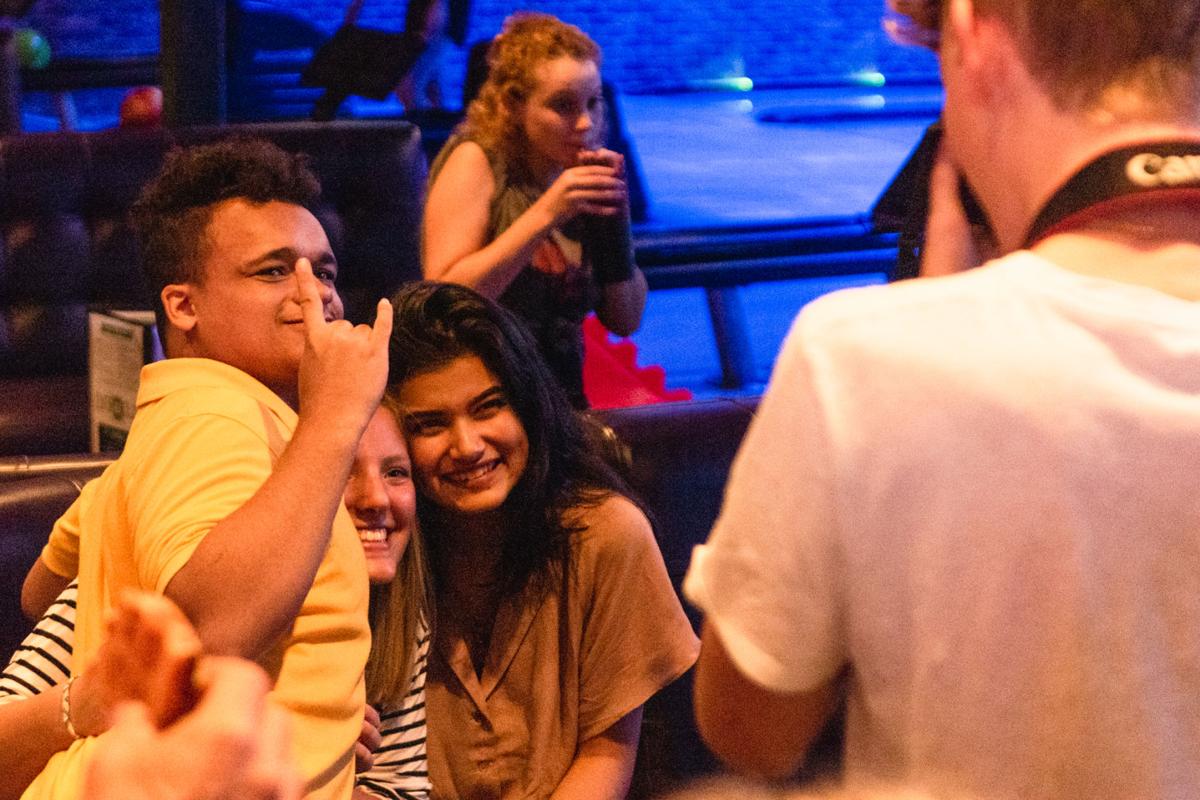 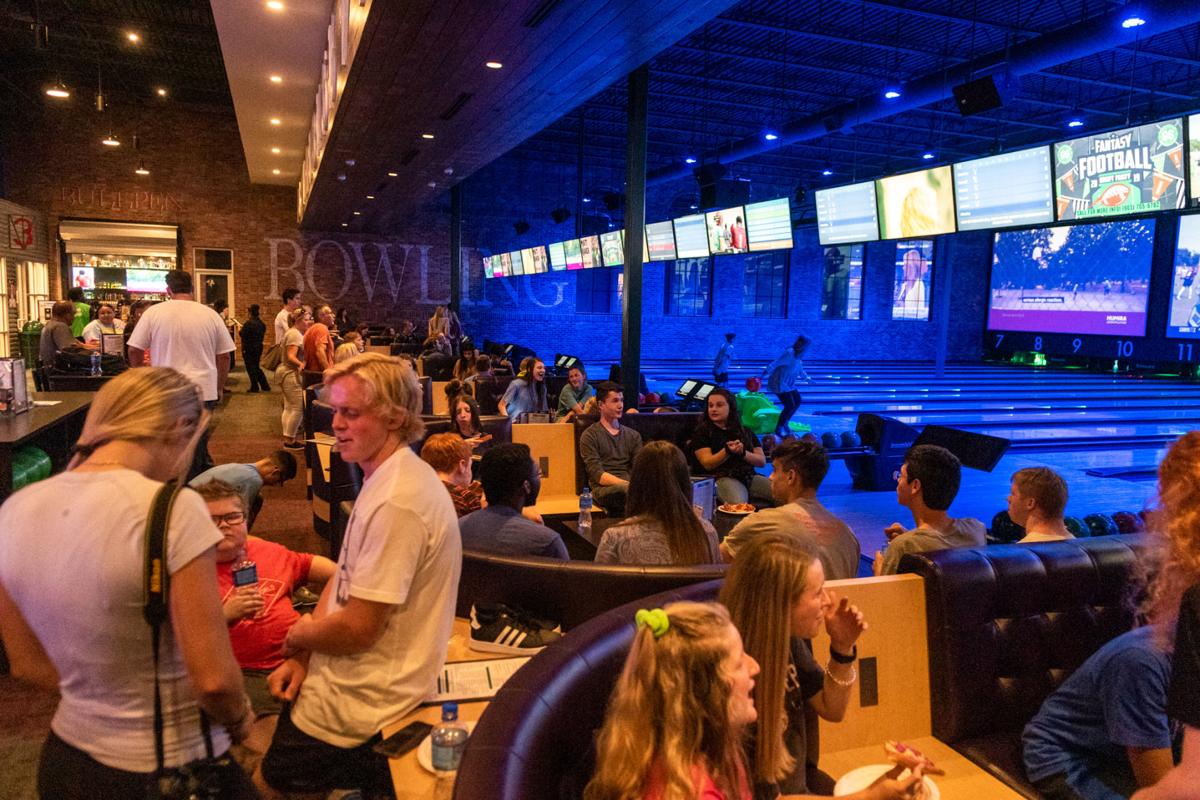 Thursday at Times Square Grand Slam bowling alley in Tyler. The event was a social kickoff for Lee’s Best Buddies organization, a program where students learn to build one-to-one friendships with fellow classmates who have intellectual and

Dozens of students from the school’s general education and special education programs laughed, danced and bonded over strikes, spares and pizza during the course of the Thursday event, cheering each other on as they bowled, and building camaraderie.

Second-year Best Buddies member and special education student, Bret Lee, said his favorite part of the night was “making friends and having fun.”

Best Buddies is an international program where students learn to build one-to-one friendships with fellow classmates who have intellectual and developmental disabilities.

The organization was brought to Lee last fall by Silva, a voluntary student aide with special education classes, and adaptive behavior teacher Austin Doyle to promote inclusion and friendship between general education and special education students.

“It’s known, if you ask anybody that’s gone through the public school system, that there’s always the group of special education kids. They’re by themselves … and we’re tired of it,” Silva said. “We wanted to facilitate friendships among everybody.”

“Our students are just amazing students that really want to get involved,” Doyle said. “We gave them the opportunity to get involved and they’re really stepping up to the plate.”

What started as an idea quickly turned into a full-fledged movement after Doyle asked Silva to preside over the organization and they began recruiting members.

“We broke the 100-member mark in about (the first) two months last year,” Doyle said.

Friendships between special and general education students are formed based on a compatibility survey and are finalized by a group of student officers and Doyle, the organization’s faculty adviser.

Throughout the year, Best Buddies hosts a variety of events for its members based around holidays, school functions and events unique to the organization to strengthen friendships and provide opportunities for students to hang out in a fun and friendly environment.

“We’ve started including each other as a family,” Silva said. “That’s really what we are.”

From hosting Friends-giving, a Valentine’s Day party, their own homecoming dance and even Buddy Bowl, based around the Lee vs. John Tyler football game this past week, each gathering is designed to bridge the gap between general education and special education students and create a safe, positive and inclusive space for everyone involved.

“I love the idea because it gives these kids a chance to interact with their peers that they don’t have in their classroom,” said Angela Buttram, mother of special education student Nicholas Buttram. “I’m just grateful to all the kids that come and pair up with our special needs children. It really means a lot to them.”

Doyle said, “At the end of the day we’re promoting inclusion in the community, on campus with our students, and it’s just hard to beat.”

Doyle and Silva have a vested interest in helping special education students because they both have younger sisters with disabilities.

Silva’s sister, Alyssa Silva, who had epilepsy and forms of psychosis, passed away in 2018 at the age of 14. He said her legacy is what motivates him to continue spreading the word about inclusion through Best Buddies.

“I’m working to honor my sister and push forward all the knowledge she gave me in 14 years, because I didn’t realize there were two worlds and two sides of this community until she was gone,” he said. “I want to make sure that everybody doesn’t see them as their disability, but that they see them as the amazing phenomenal people that they are.”

Referencing his own sister, Doyle said, “Growing up, it was my favorite thing working with her and it turned into a profession.”

Though the organization has grown leaps and bounds in its first year, Doyle plans to increase membership from 120 students to 175 students throughout the school year, and to expand the reach of Best Buddies by forming chapters at other area schools.

“Our plan is to get it to Whitehouse, Lindale, even John Tyler and some of the schools within Tyler ISD,” he said. “We’re all about promoting inclusion on campus and in the community.”

Visit bestbuddies.org for more information about the Best Buddies organization.