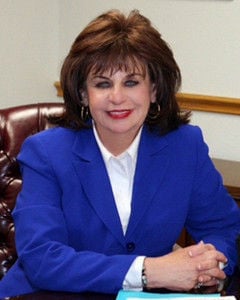 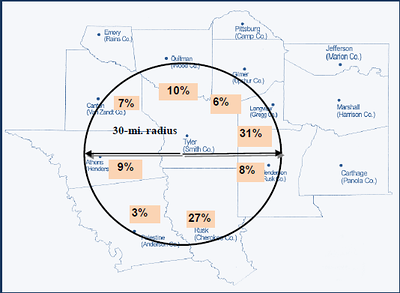 Map of County Residents Interested in Working in Smith County 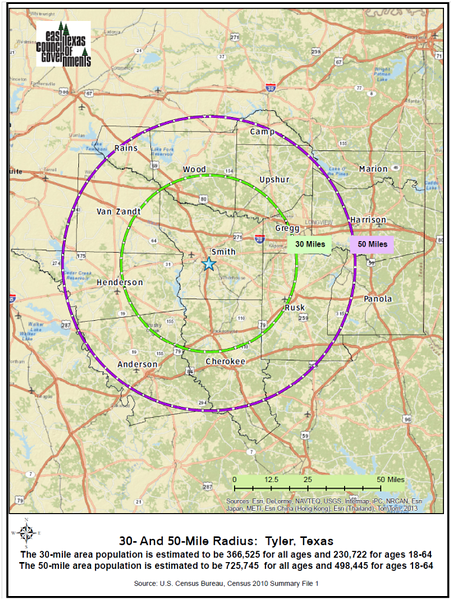 Map of County Residents Interested in Working in Smith County

Dr. Marilyn Young believes the Tyler area has a strong workforce made up of people willing to commute and be trained for new skills.

"Overall we have a strong labor force," she said Thursday. "We have people who are willing to work."

Dr. Young, professor of management for The University of Texas at Tyler's College of Business and Technology, conducted the 2014 Tyler Labor Market Survey for the Tyler Economic Development Council.

The survey, produced every three years, is a detailed assessment of the Tyler area labor force, ages 18 to 64, within a 30-mile radius of the city. The population for all ages within that area is estimated to be 366,525, compared to about 365,000 people in 2011.

She said the Labor Market Analysis Survey is good information for businesses considering moving to or expanding in Tyler and for human resource development.

"Available labor is the No. 1 criteria for most companies looking to expand or relocate," Tom Mullins, president and chief executive officer of the Tyler Economic Development Council, said. "If a community cannot provide a trained/skilled workforce, businesses will look elsewhere to invest and grow."

Mullins said they have the report done every three years because available labor is key to companies making site decisions.

"Our reports provide a more detailed profile of the labor market that is not available from monthly workforce reports," he added.

The 2014 survey results showed 88.6 percent of the respondents were employed while 11.4 percent were unemployed and available for work. The official unemployed percentage was 6.2 percent, while the hidden unemployment, 5.2 percent, included new entrants and discouraged workers.

Demographics of those surveyed included: 77 percent had lived in East Texas 10 years or longer; the median age of Smith County employees is 41; 14.5 percent had less than a high school degree; 25 percent had college or advanced degrees; and the average salary was $38,150.

The labor market is composed of 49 percent females and 51 percent males. The ethnic background of the labor market consists of 68.3 percent white, 15.4 percent black, 14.3 percent Hispanic and 2 percent other, the survey shows.

Of the employed, 82.9 percent worked full-time. Of the remaining part-time workers, 42 percent of those wanted to work full-time.

Employees had been with their company for an average of 13 years and 42 percent of those working believed they were overqualified for their jobs.

The major occupational classifications of the employed were office and administrative support, sales, food preparation, production, transportation and material moving and construction and extraction.

More than 30 percent of the labor market reported they have one more of the following skills: data entry, word processing, customer service representative, management, clerical, sales, spreadsheet, secretarial and bookkeeping.

She said most people are willing to undergo training for work and will commute. "All these years that has not changed," she said. "People are industrious."

Mullins said the major findings in the latest report were consistent with what they have found in the past. Minor changes included the distance people will travel (22 to 23 miles now compared to 27 to 28 miles before); and minimum wages needed to take a job is now close to $13 an hour compared to $10 to $11 per hour in 2011.

The former occupations of the unemployed consisted mainly of office and administrative support; sales; education, training and library; food preparation and service related; and construction and extraction classifications.

The latest survey is the ninth edition, Dr. Young said, adding that she first compiled the statistics in 1989. She used information from the U.S. Census 2010 estimates, American Community Survey, Texas Workforce Commission, 2011 Tyler Labor Market Survey and other data sources.

A copy of the 2014 report can be found at www.tedc.org/labor-survey.

“May the grace of the Lord Jesus Christ, and the love of God, and the fellowship of the Holy Spirit be with you all.” (2 Corinthians 13:14)