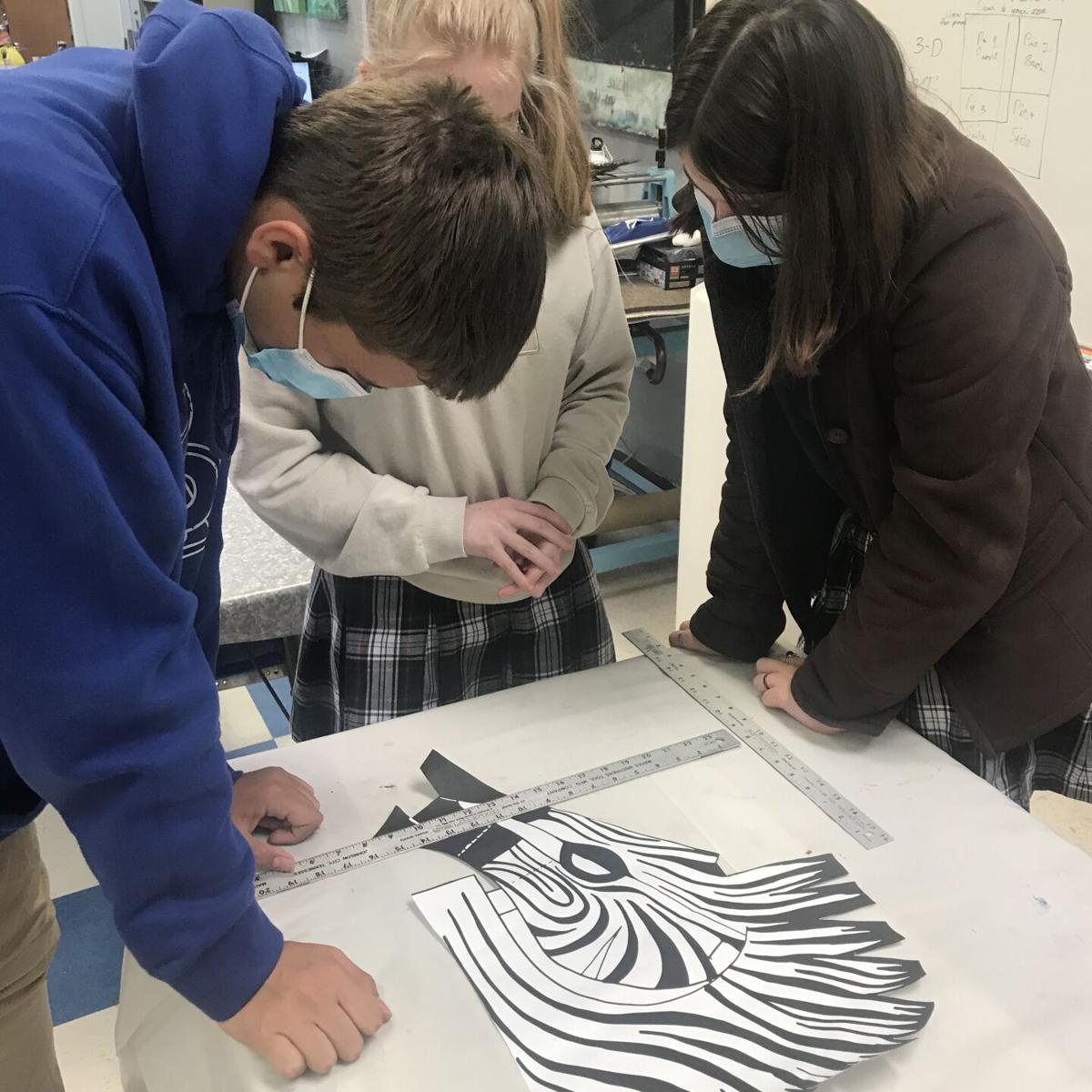 All Saints Episcopal School students work on their masks for Tyler Junior College’s “Aladdin” production. The students have been working on the project for about a month now. 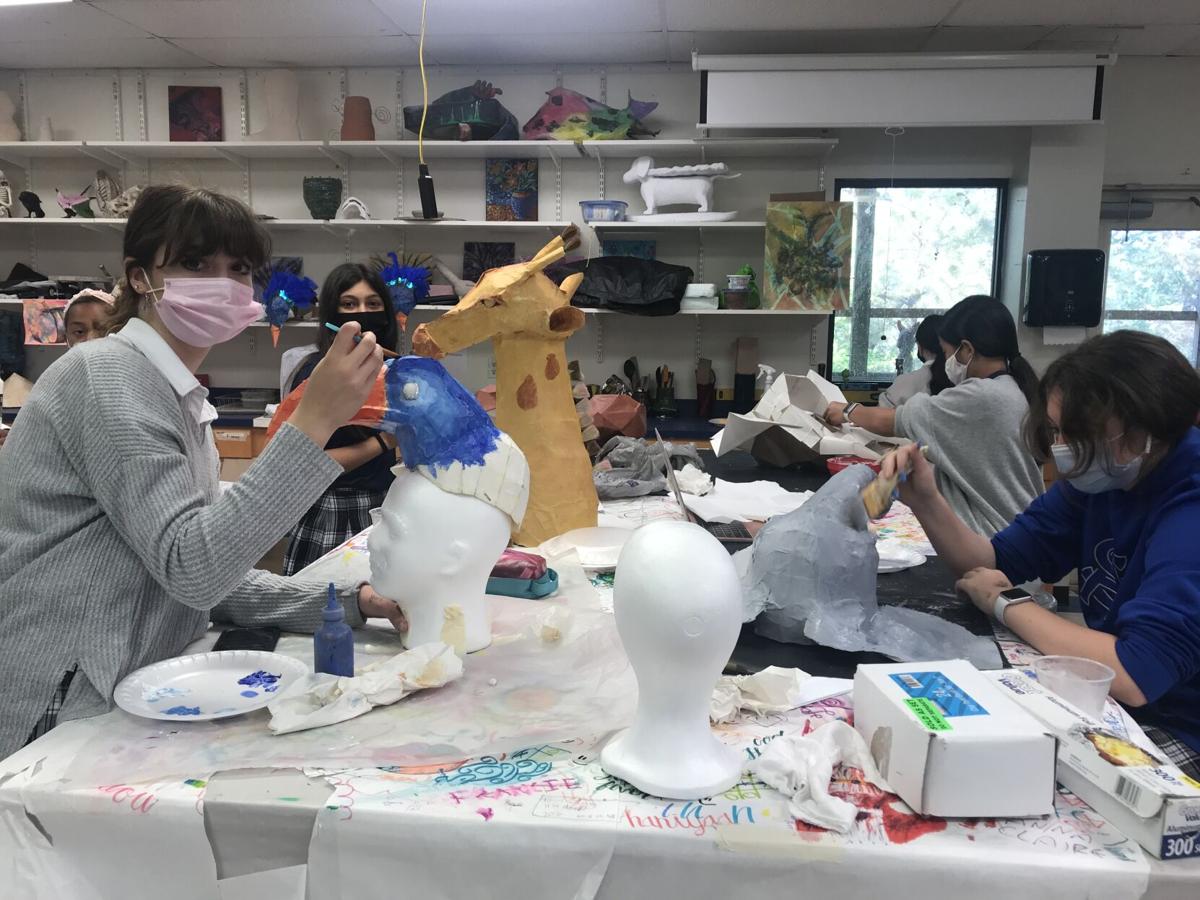 A team of All Saints Episcopal School students work on their masks for Tyler Junior College’s “Aladdin” production. The students have been working on the project for about a month now. 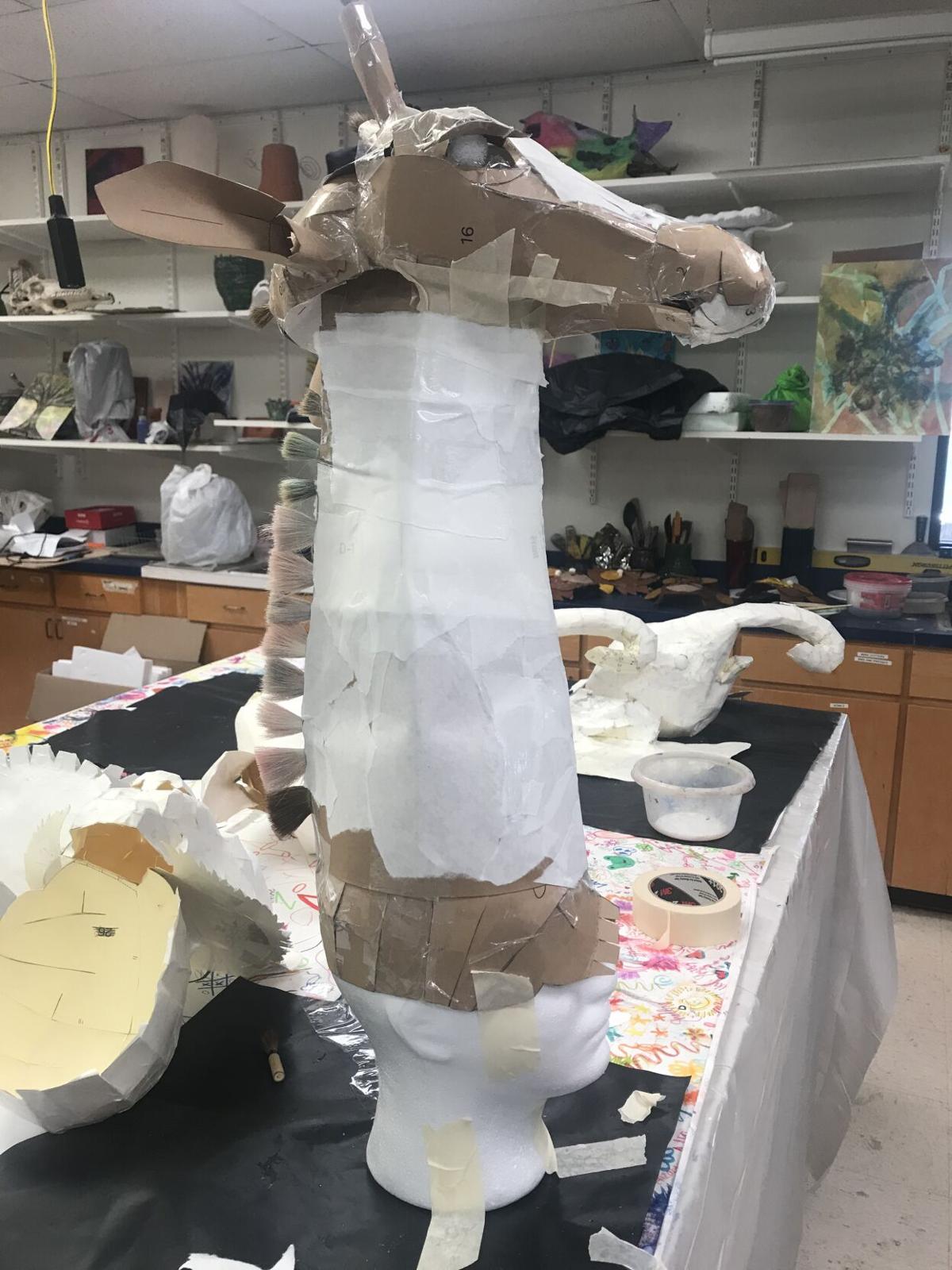 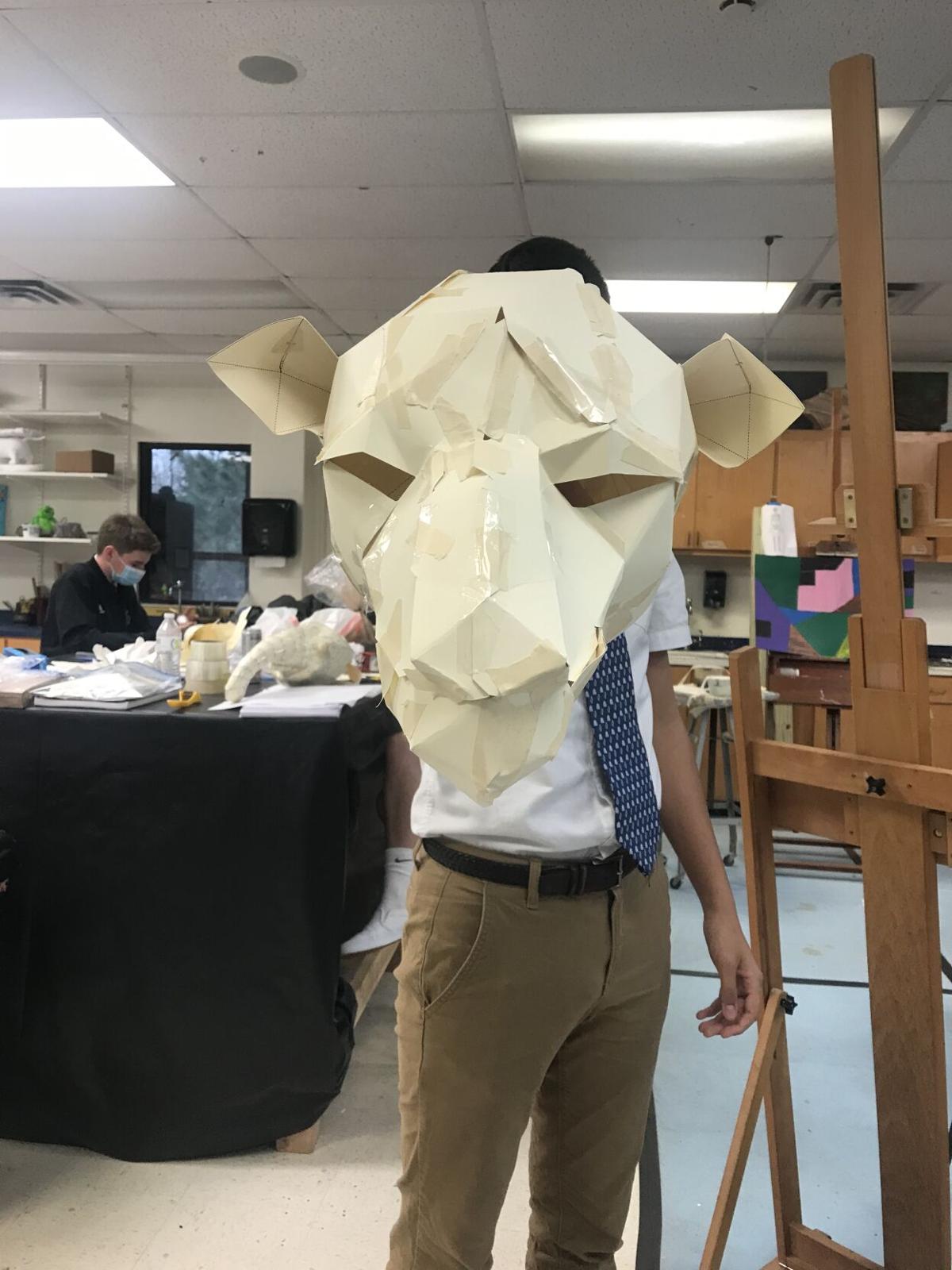 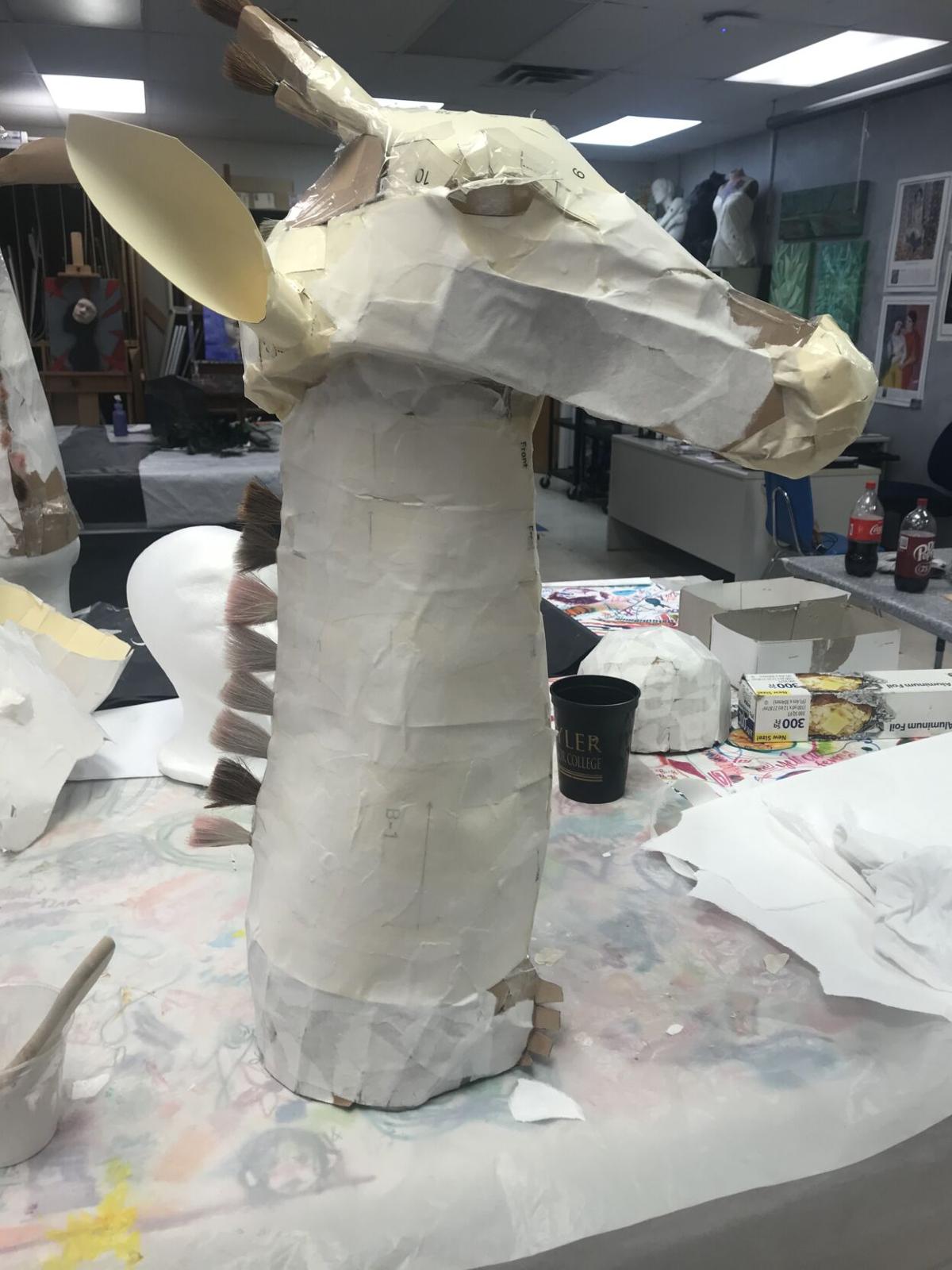 Students at All Saints Episcopal School covered the masks for Tyler Junior College’s “Aladdin” production with a papier {span}mâché{/span} glue and paper solution. The students began working on the project before the winter storm. They were able to catch up by working on the masks outside of their time in the classroom. 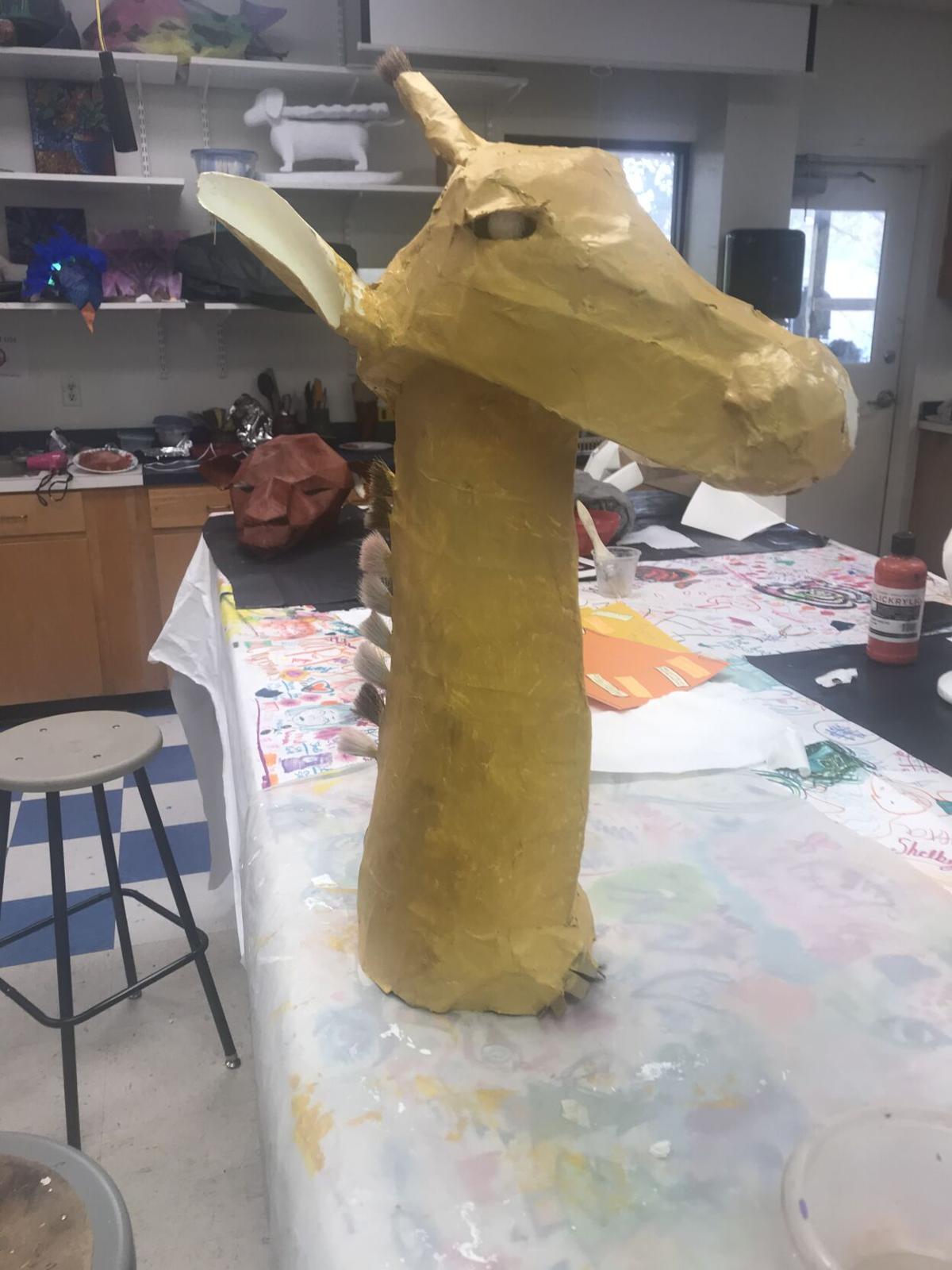 All Saints Episcopal School students work on their masks for Tyler Junior College’s “Aladdin” production. The students have been working on the project for about a month now.

A team of All Saints Episcopal School students work on their masks for Tyler Junior College’s “Aladdin” production. The students have been working on the project for about a month now.

Students at All Saints Episcopal School covered the masks for Tyler Junior College’s “Aladdin” production with a papier {span}mâché{/span} glue and paper solution. The students began working on the project before the winter storm. They were able to catch up by working on the masks outside of their time in the classroom.

It’s been some busy weeks for both the upper class and lower class students at All Saints Episcopal School, who have been spending hours creating dozens of masks for Tyler Junior College’s “Aladdin” production.

Outside of a zoo or nature preserve, a large number of “animals” won’t be found in one place as the vast array on stage in TJC’s “Aladdin.”

Students at All Saints Episcopal School have been busy designing, creating and testing the musical’s masks and puppets to ensure they function properly.

Most of the animal masks are sculpted and painted with incredible detail to allow the masks to come alive.

The actors wear special masks that all have a unique design to populate numerous realistic-looking animal puppets. Actors manipulate and voice the animal characters in full view of the audience as a Western take on Japanese bunraku puppetry.

Gale Lassiter, upper school art teacher, said her students have been working hard to ensure the masks come out excellent. The students were given the freedom to create the camels, giraffes, zebras and monkeys.

“It allowed my students to be freer with the project and to input into the project more. They would review different looks of a camel or an elephant or a giraffe and decide how they wanted to finish out their mask, and still, although some of them are a little bit different in nature with the animal, they flow together really well,” Lassiter said. “We’ve never done this as a class before.”

The students had never made 3-D masks before. They have made plaster masks, which cover faces only. The class researched masks and ultimately decided to choose a mask which mounts on the top of the head.

“We just began researching, found the kind of mask that we wanted to use and the process was first, printing these diagrams onto cardstock, cutting them out and putting them together, which some of them, like the elephants, were not an easy task. From there, we covered them with a papier mâché glue and paper solution, then began painting them to look as realistic as they could,” Lassiter said.

The students also made all of the caps that the dancers will wear on their head. Students were given the circumference of the dancers’ heads so that it would fit their heads.

When Krisi Franks, Tyler Junior College professor of dance, contacted Lassiter about the project, the students were both excited and nervous to make the masks.

“They took it on very excitingly,” Lassiter said. “This was not something that they were made to do. We started out with teams that were volunteers, they were told they could join the team if they wanted to.”

“It became a really big project of volunteers who just really wanted to get involved in this. It didn’t take persuasion, it didn’t take, ‘You have to do this for a grade’ this was something that they were doing of their own free will and wanted to participate in, not just for the experience and the fun of it, but also to represent All Saints in something that was in our community,” Lassiter said.

The class fell behind on the schedule of the project when the snow storm hit East Texas.

“Initially, it started out as a smaller project, about nine masks, and as the dance crew grew, we went ahead and assumed the responsibility of all 20 of the masks that will be required,” Lassiter said.

Some of the masks required did not have a pattern for students to follow, so students had to draw out their own patterns to create the masks from scratch.

“The (students) were very committed to the project right from the very beginning. They gave up their time even during study hall, they came in to work on them, without being asked, came to Saturday workshops to complete them, because the snow storm put us about a week behind, as did the TJC costume designer, but we’re all on track now and they’ll be delivered on Tuesday,” Lassiter said.

Olivia Goedeke, freshman at All Saints, was one of the students who participated in the making of the masks. When her teacher said they’d be working on making a project for a real-life production, Goedeke said she was intimidated.

“I was a little nervous, but also confident. When you have a piece that’s going up in front of a bunch of people you don’t know, you’re a little nervous. You want to make sure it looks really good, but I was also confident because the skills we’ve been learning throughout the year were going to come in handy,” Goedeke said.

Some skills that helped her in making the masks included the different techniques with brushes and how to make different patterns with each brush.

“We’ve probably been working on it maybe like a month. The hardest part of the process is probably just figuring out how to put the whole thing together in the early stages. It’s a lot of different pieces, you have to figure out how they fit together,” Goedeke said.

Goedeke said she has completed the full process of one mask and helped people put together their masks.

“It makes me happy because you see how you started out from the paper beginnings and you see where it ended with the all the paint and the final product and it really makes you think about how the most beautiful art pieces can really just come from paper. It’s really inspirational,” Goedeke said.

Lassiter said that at All Saints, they partner on community projects to get students involved and so they could see art can be used as more than just a class.

“I make it a point of using materials with my students, in their sculpture work, that will give them the availability of resources outside for part-time jobs, sign making, many things, the skills that they use, are used in outside activities, like a production,” Lassiter said.

She said it is important to show her students skills that allow them to see they can turn something as simple as paper into something profound, used in a safe setting as a production.

“You cross over boundaries on how their art can be used,” Lassiter said.

Lassiter has taught 2D and 3D art to her students, some who wanted to participate in mask making as well. She has two seventh-graders and 10 eighth-graders, who have given up their time after the masks were together by the upper school department, to put the paper mache product on and do some base painting of the forms.

“In 2D art, it’s more about drawing skill and painting skill, but I think the drawing skill is what really played a part with the 2D students. When you don’t have a pattern, you need drawing skill, or have to learn drawing skill to actually look at something like a zebra,” she said.

Lassiter said one of the student teams working on the masks, had to create the smaller zebra masks for the children that were going to perform in the production. So they had to use their drawing skills learned from All Saints.

“They looked at a baby zebra, drew out the pattern and created how the mask should be put together. So with 2D, it’s all about painting and drawing on flat surfaces, however when you learn to paint something on a piece of paper, it also transforms into the ability to do the same skill on a 3D object,” Lassiter said.

There has been a total of about 20 to 25 students who have worked on the masks in some way or another, according to Lassiter.

“It didn’t require 3D skill or 2D skill, it really only required wanting to work on the project, so whoever showed up, I simply gave them a task that they felt like they could handle, and if they wanted to learn a new task, like collaging or doing the final painting, or even putting them together, which is very technical, they caught on really quick and were able to do it,” Lassiter said.

The students’ deadline is Tuesday for delivery, which is when the masks will be given to the TJC Dance Company.

“It’s been nice, even with COVID, to have the opportunity to be a part of this, even though we are still restricted as far as allowing people on campus, or allowing our students off campus, this was a collaboration we could do despite COVID, which was really a big thing,” Lassiter said.

Lassiter added, “We don’t just see a student, or a student artist. We see the maker, the fabricator, the designer, the engineer, the writer, the musician. We see them as doctors, nurses, teachers, linguists, servants and givers in the community, and so much more. We see these students beyond our school and give them the opportunities to see themselves roles and possibilities for the future. If a student had an interest in something as their future. All Saints provides the opportunity to explore that direction.”

TJC’s Academy of Dance will present “Aladdin” this Saturday; however, tickets are sold out.