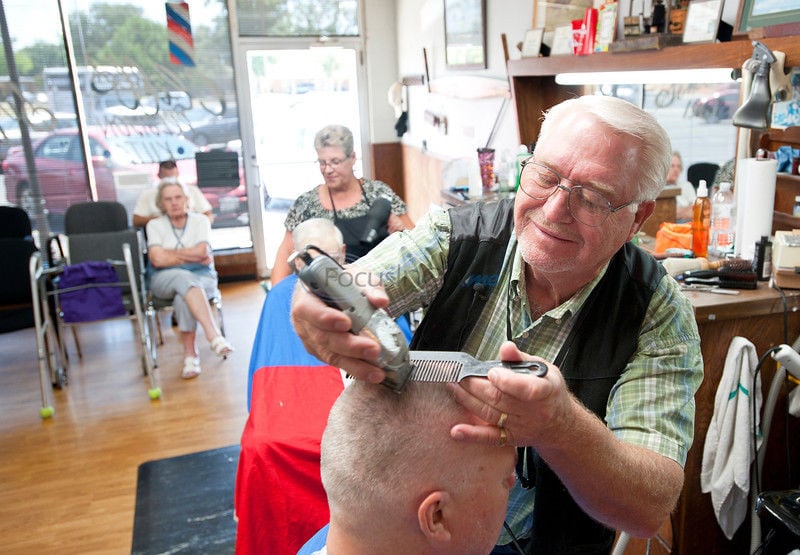 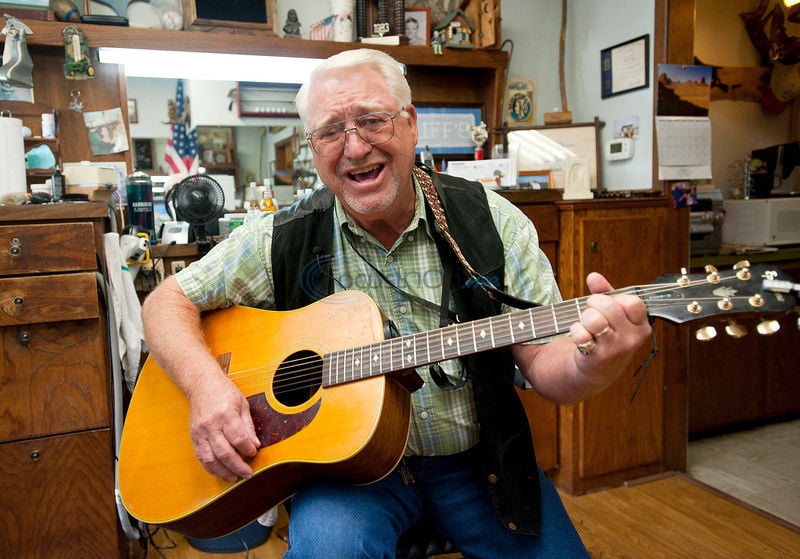 photo by Sarah A. Miller/Tyler Morning Telegraph Tyler barber Cliff Lasseter, 69, plays the guitar as he sings an original song during a lull in business Wednesday July 7th, 2013 at Cliff's Precision Kuts in Tyler. Lasseter has been a licensed barber since 1962 and opened Cliff Precision Kuts in 1968. He works at his shop with his wife of 26 years, Becky Lasseter, 58. At age 21 Cliff Lasseter took up guitar as a hobby, but says he didn't play seriously until age 62. Sometimes his customers come in and play or sing too.

photo by Sarah A. Miller/Tyler Morning Telegraph Tyler barber Cliff Lasseter, 69, plays the guitar as he sings an original song during a lull in business Wednesday July 7th, 2013 at Cliff's Precision Kuts in Tyler. Lasseter has been a licensed barber since 1962 and opened Cliff Precision Kuts in 1968. He works at his shop with his wife of 26 years, Becky Lasseter, 58. At age 21 Cliff Lasseter took up guitar as a hobby, but says he didn't play seriously until age 62. Sometimes his customers come in and play or sing too.

Cliff Lasseter wanted to be a dentist but couldn’t afford the schooling.

“I went to barber school and I’ve been married to it ever since … It’s been good to me,” he said.

Lasseter, 69, has been a barber for 52 years. “You’re not going to get rich at it, but if you make good investments, you can still do real good,” he said of the profession.

Lasseter grew up poor in Waco, the second youngest of 19 children. His dad was a ranch foreman before he bought a five-unit apartment building with a two-bay mechanic shop behind it. He intended for his family to live in part of the apartment and rent out other units. But before they knew it, both sets of Lasseter’s grandparents were living there, as well as several of the children, Lasseter said.

He recalls his mother rising up before daylight, washing and ironing clothes and getting the kids off to school before cooking her husband’s breakfast and sending him to work.

“From daylight to midnight every day,” Lasseter said of his mother. “She was something else. … Both of my parents were hard workers.”

When Lasseter was 17, he had sisters living in Fort Worth and Tyler and was asked which city he would rather move to. He decided he preferred East Texas.

“That’s how we got here,” he said. “All we had was the shirt and pants that we had on — nothing.”

His brother-in-law “conned” the barber college in downtown Tyler to let him attend school and pay later. But they wouldn’t let him graduate without paying, so his siblings took up a collection to loan him the more than $900 bill. He went to barber school in 1961 and became licensed the following year.

He began working for Bob’s Barber Shop on South Vine Avenue and worked there for six years before opening Cliff’s Precision Kuts in 1968.When he opened on South Broadway Avenue, near Loop 323, his shop was the end of town — everything beyond it was pasture — and haircuts were $1.75.

“It has really changed out here,” he said recently. “Used to the only time we had traffic like this was at Christmas.”

Lasseter went through a few barbers in his shop before meeting his wife, who has worked by his side for 25 years. “Becky (Lasseter) moved in here 25 years ago and took over this barber shop,” he said. “I had to marry her so I could keep a job.”

Mrs. Lasseter, 58, was living in Hubbard, working as a teacher’s aide and school bus driver. She met Lasseter through a friend, and they married 26 years ago. Each had three children. When she moved to Tyler, she had a hard time finding a job that would allow her time with the children. Lasseter said his wife was the only one who could cut his hair, so he sent her to barber school.

Working at the shop allowed her to leave and take care of the kids when she needed to, she said.

“We do argue sometimes,” she said of working side-by-side with her husband. “It’s hard sometimes. The customers keep it going though.”

“I’ve seen hair styles go long and short three times,” Lasseter said, referring to the biggest change he has seen in his profession throughout the years. When the military-style short haircuts were in style, business was great, but times got tough when long hairstyles became popular. He said not many kids are getting many haircuts now but, “there’s still enough to make a living at it.”

When asked what he has liked most about being a barber, Lasseter said, “eating.”

“Back in the 70s when no one got a haircut, we liked to have starved to death,” he said. During the slow years, he dabbled in real estate and training bird dogs.

“I wouldn’t want to start over,” Lasseter said of starting a business. “It’s just too hard anymore.”

He believes beauty shops have taken over and barbers are hard to find.

“I’m the last of the Mohicans,” he said.

Lasseter believes he has stayed in business so long simply “by being here,” he said. “If they know you’re going to be here, and they know they can get a haircut … give them a good fair price and personal service.”

He said he is proud of some of the customers he’s had who have become friends through the years. He said he becomes obligated to keep people looking good.

“People depend on you and it’s good to be needed,” he said.

Lasseter started his business in 1968 charging $1.75 per cut, and has gone up in price when he’s had to to keep up with inflation or competition.

“I charge them depending on how much money they got, and how nice they are,” Lasseter said jokingly. He can do crew cuts, flattops and even Mohawks, pretty much any kind of haircut, styling and shaves.

Mrs. Lasseter leaves the flattops to her husband and focuses on regular haircuts.

“I was afraid I’d run out of hair” with flattops, she said.

“He cuts a good flattop,” he said of Lasseter.

After about 20 minutes in the chair, Lasseter said, “Earl I could work on you for another hour but I can’t help your looks.”

After finishing with Rawls, Lasseter welcomed another longtime customer, Sam Vercher, 51, of Bullard, into his chair.

“I appreciate that Cliff, and I come to the best barber in East Texas,” Vercher responded. “Cliff’s an inspiration. That’s why I come here.”

Vercher brought both of his sons to Cliff’s for cuts when they were growing up, he said, adding that there are not too many barber shops like Cliff’s anymore.

“It’s a value to find a man barber who still cuts your hair the old fashioned way,” he said. “He’s a rare breed. … I’ve never had anyone fuss about cutting my flattop like Cliff. He’ll cut until you run out of hair if he has to.”

When he has a lull in business, Lasseter picks up his guitar and plays a song or two for his customers. He sings mostly country and gospel, as well as his originals.

Lasseter started playing guitar when he was 21, taking a few lessons, and singing in talent contests in family reunions throughout the years. He didn’t start “getting serious about it” until he was 62.

“I didn’t have time before. I was raising a family,” he said. “I almost waited too long. My voice isn’t holding up so well.”

Lasseter has a few customers who come into the shop and sing or play guitar.

After 52 years of barbering, Lasseter said he is still learning.

“Like the song says, life is like a whirlwind, it spends to the end,” he said. “It flies by.”

During football season, they take off an hour early for “Friday night lights” to go watch grandkids play football. One grandson is a quarterback at Texas A&M University — Commerce, Lasseter boasts.

Mrs. Lasseter said her husband has tried to cut back his work but his customers won’t let him cut back too much. They play golf once or twice a week.

“I never dreamed at 69 and a half I’d still be cutting perfect flattops,” Lasseter said. “You have to play a lot of golf and keep in shape to hold clippers up like this every day.”

When asked if he has plans to retire anytime soon, he said, “You come by next week and I might not be here.”

While his wife said he continues working to support his hobbies, he said it is because she has expensive taste.

“It’s been good to me,” Lasseter said of the business. “Tyler is a great place to live, a great place to raise a family. … When there’s that many good people in one place you’re going to make a living if you treat them right and give good service.”