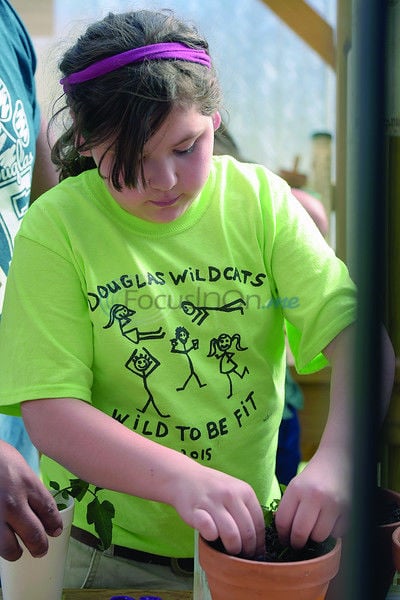 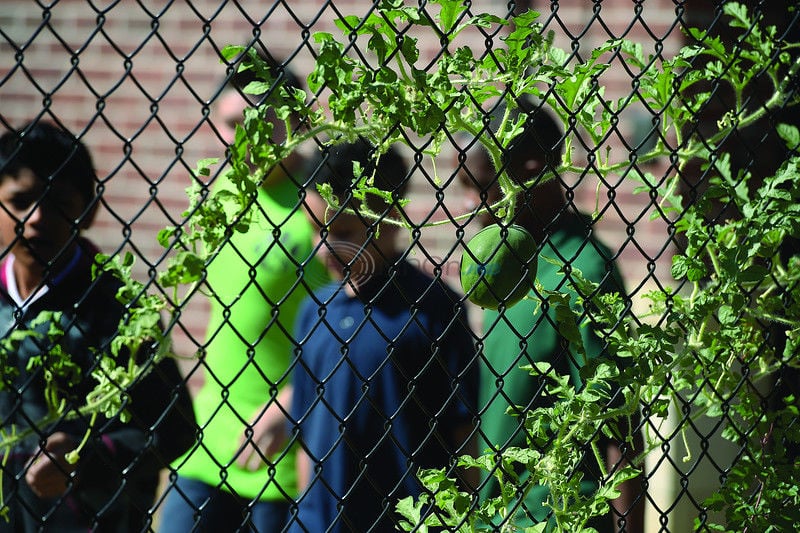 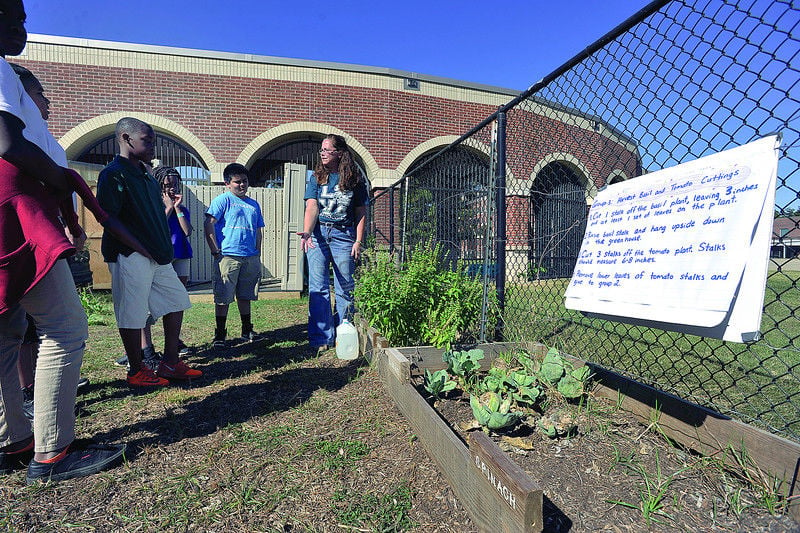 Jennette Gomez, right, explains how to harvest basil for drying during a regular session of the Friday Garden Club on Friday, Oct. 2, 2015, at Douglas Elementary School in Tyler. Andrew D. Brosig/Tyler Morning Telegraph 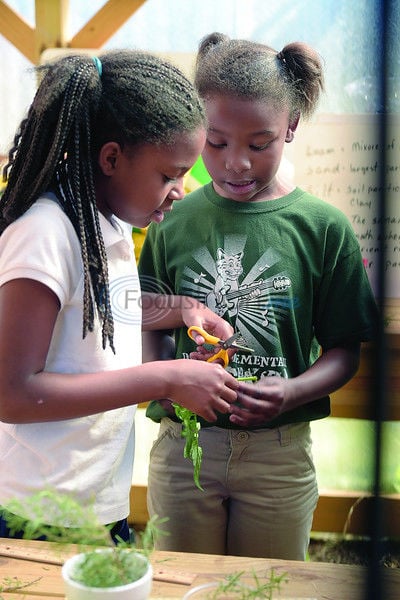 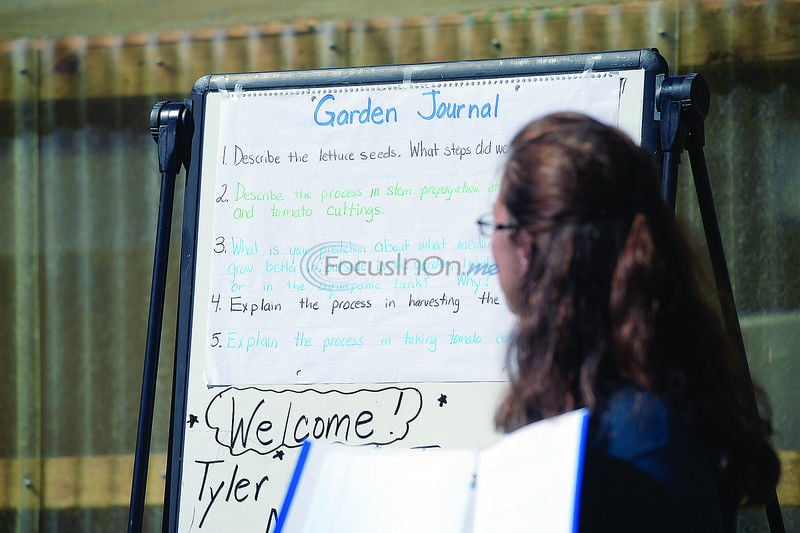 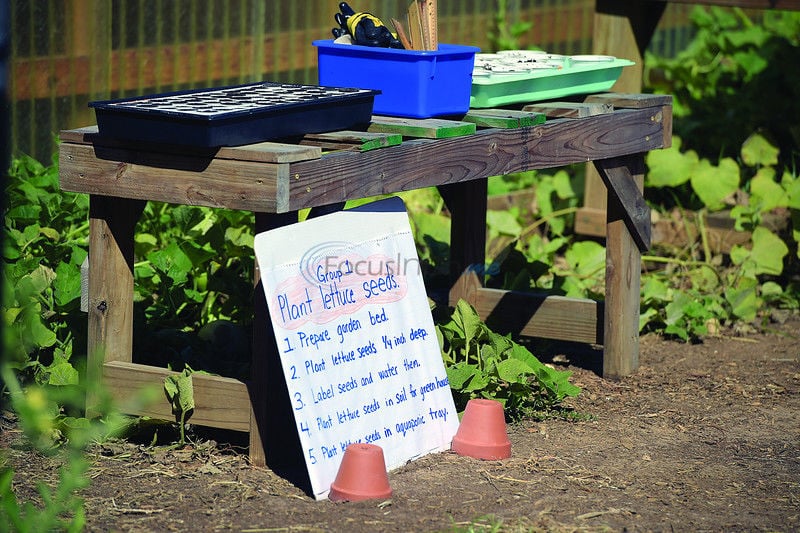 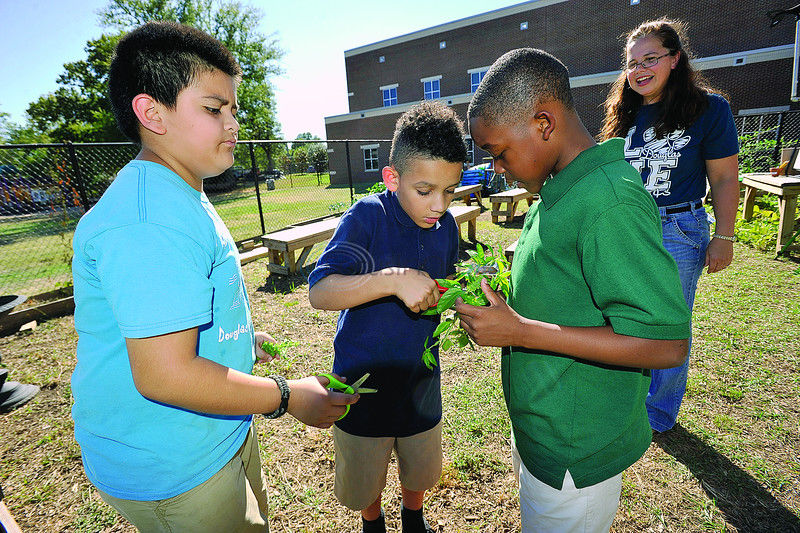 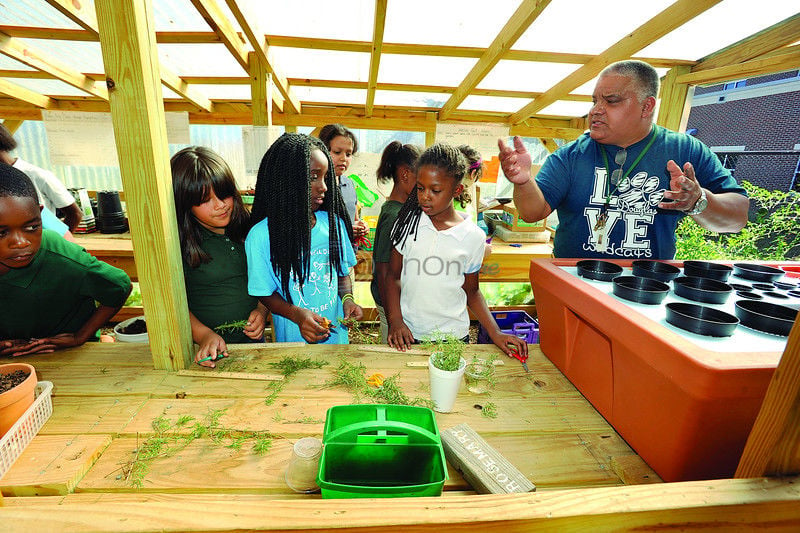 Reyes Gomez, right, works with students in the greenhouse behind Douglas Elementary School on Friday, Oct. 2, 2015, in Tyler. The students built the greenhouse themselves as one of the experimental environments for their Friday Garden Club meetings at the school. Andrew D. Brosig/Tyler Morning Telegraph 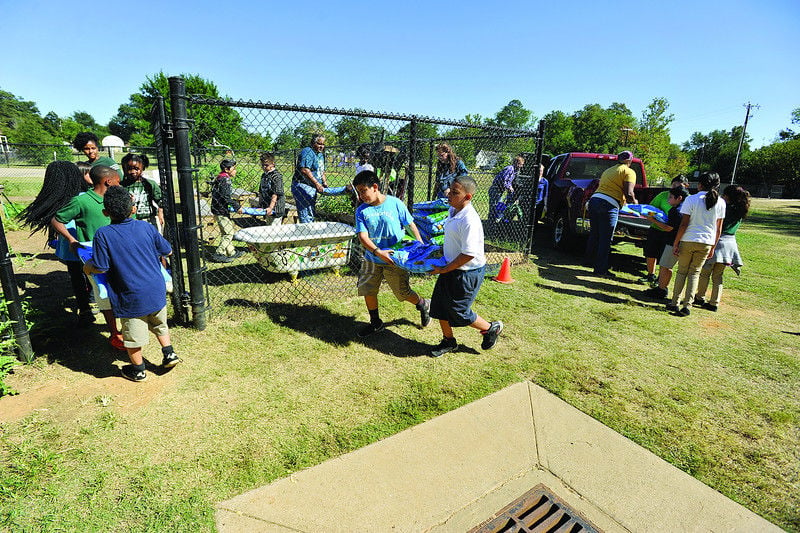 Jennette Gomez, right, explains how to harvest basil for drying during a regular session of the Friday Garden Club on Friday, Oct. 2, 2015, at Douglas Elementary School in Tyler. Andrew D. Brosig/Tyler Morning Telegraph

Reyes Gomez, right, works with students in the greenhouse behind Douglas Elementary School on Friday, Oct. 2, 2015, in Tyler. The students built the greenhouse themselves as one of the experimental environments for their Friday Garden Club meetings at the school. Andrew D. Brosig/Tyler Morning Telegraph

What started as a small but successful herb garden four years ago at Douglas Elementary School has grown into a vegetable, fruit and flower garden the size of a classroom and even has the beginnings of an aquaponics system, a symbiotic arrangement between fish and plants floating on top of the tank.

The idea for the garden originated when family and friends of the late teacher Humberto Arriola, who enjoyed the outdoors, donated $800 to $1,200 to a memorial fund at the school in his honor.

"They wanted a learning center. The decision was let's do some type of interactive garden club. Every season it comes back and there's always something new to teach the children," Principal Christy Roach said. Later Tyler ISD Foundation provided a $5,000 grant and AgriLife provided books and materials.

The memorial garden started in the school's courtyard in little above ground planting beds built by teacher Reyes Gomez. He and his wife, teacher Jannette Gomez, recruited children for an after-school Garden Club that meets from 3:15 to 4:30 p.m. Fridays.

Joining the couple as club sponsors are teachers Ashley Green and Catherine Lengua. The sponsors consider themselves directors who guide the students in what to do, but they let the students do the gardening.

That year the garden was relocated to a larger plot adjacent the school building and fenced in.

Fourth-grader Kaliyah Sanders, 9, who joined the garden club this year, said: "We get to learn the cycle of how the plants grow and the process of it. We learned how to plant and we learned how to take them out of the ground. We saw a tomato and a pepper grow. Some of us took one home. It was delicious."

The garden not only has more space now for plants but also has benches for children to sit on while sponsors teach them lessons about gardening. It also has a greenhouse.

One of last year's lessons focused on worms. Children read a book about worms and used magnifying glasses to look at the different parts of the worm and learned how the worm can be beneficial to the garden, Mrs. Gomez said. After the lesson, garden club members released worms into the garden.

Sponsors plan to expand use of the garden this year beyond the garden club to involve all teachers on campus, allowing them to utilize the garden for classes in the learning center during the school day.

A goal for the garden club is to have the members learn how to build things and become more familiar with measuring and how to use tools, Reyes Gomez said. "You'd be surprised how children having problems in the classroom will go outside and work very well."

Building the greenhouse took a full year. "We could have had it built in a weekend, but what makes this greenhouse so special is the kids actually built it," he said, saying the greenhouse does not look professionally made and there are crooked nails.

"We wanted to teach these kids how to work and teach them work ethics and how to add and subtract and use science in gardening at the same time," he said. Children brought their parents and proudly showed off what they had made.

Teacher sponsors taught the children about stem propagation. Mrs. Gomez said they started in the greenhouse where they cut off the tip of rosemary, for example, set it in water and added root activator to the water. When the rosemary began producing roots, it was transplanted to soil and after awhile, it was transplanted to the garden outside.

"We did a lot of direct seeding in raised garden beds that the children built themselves or we started seeds off inside the greenhouse as well and once everything started growing, we transplanted out into the raised garden beds," Mrs. Gomez said.

There are approximately eight raised beds about two feet wide by 16 feet long around the perimeter of the garden.

Fifth-grader Nicolas Rodriguez, 10, helped make the beds. "I'm good at building stuff and I'm a good artist," he said. "I like learning about plants and I like planting them. We got a watermelon but it was too watery inside to eat it. I like being with my friends in the garden club."

It could be a picture perfect garden if the sponsors did it or if someone was hired to do it, but the point is to let the students garden, Mrs. Gomez said. "We are hoping that their experiences in the garden will translate back into renewed interest in subjects such as math and science when they get back to the classroom," she said.

There are three compost bins in the garden where weeds are deposited and decompose for use in enriching the garden soil.

"One of the things that is so important is that the teachers are teaching (garden club members) life skills," the principal said. The garden gives them the perspective of a fresh vegetable and they can carry on at home what they learn about gardening and it transcends into other activities, Ms. Roach said.

Children even came to the school four times during the summer for gardening activities and the garden club functions year-round.

It taught them about healthy eating, how to produce their food and about different careers in agriculture in conjunction with a workforce study grant from Texas A&M AgriLife Extension Service.

The first week of school, children approached the principal asking when they could join the garden club. "Our premise has always been it's a privilege, not a right. They have to be good citizens. They have to take it seriously and be willing to get their hands dirty and they love it," Ms. Roach said. Currently, membership is limited to about 25 or 30 fourth- and fifth-graders.

"I joined this year because I want to learn how to plant vegetables and to see them grow," Khyanna Lewis, 9, a fourth-grader, said.

Rosa Tories, 9, another fourth-grader, said being in the club helps people learn more about gardening. "I learned that bugs like to eat plants," she said.

Plans for this year call for building a shed for shovels and other equipment, Yaxaira Cerda, 11, a fifth grader, said. "I like to garden," she added.

Dorsmar Rosales, 11, enjoyed being in the garden club so much while attending Douglas that even though she now attends Hogg Middle School, she comes back to assist with the club as a way of rendering community service. "I like helping out because I get to teach people new things," she said.

When she was a club member, she recalled, "I liked how it wasn't just about learning about plants. It was about learning about different ways to help plants grow and adaptation and building new things. We grew strawberries and watermelons and pumpkins and lettuce and cabbages. Now the garden is growing zucchini, watermelon, herbs and beans."

Planning began last year for an Aquaponics system that has been set up and will be placed in use this year in the greenhouse.

The system provides a way to grow plants using fish in a 55-gallon water tank/aquarium to feed the plants floating on top of the water. The plants will take nitrogen out of the water and provide nutrients for the fish at the same time. Garden clubbers researched five or six different fish and their needs before deciding to use catfish in the tank.

Children were taught about the nitrogen cycle and ph balances. They will need to measure the ph balance, temperature and size of the fish daily. They will write their findings, try to explain why things are growing or not growing and possible solutions.

"We are bringing real-life issues into the classroom and we are taking classroom issues into real life. That's why the garden club is fun and a good learning experience for the children," Gomez said.

“For the joy set before him he endured the cross, scorning its shame, and sat down at the right hand of the throne of God.” (Hebrews 12:2)