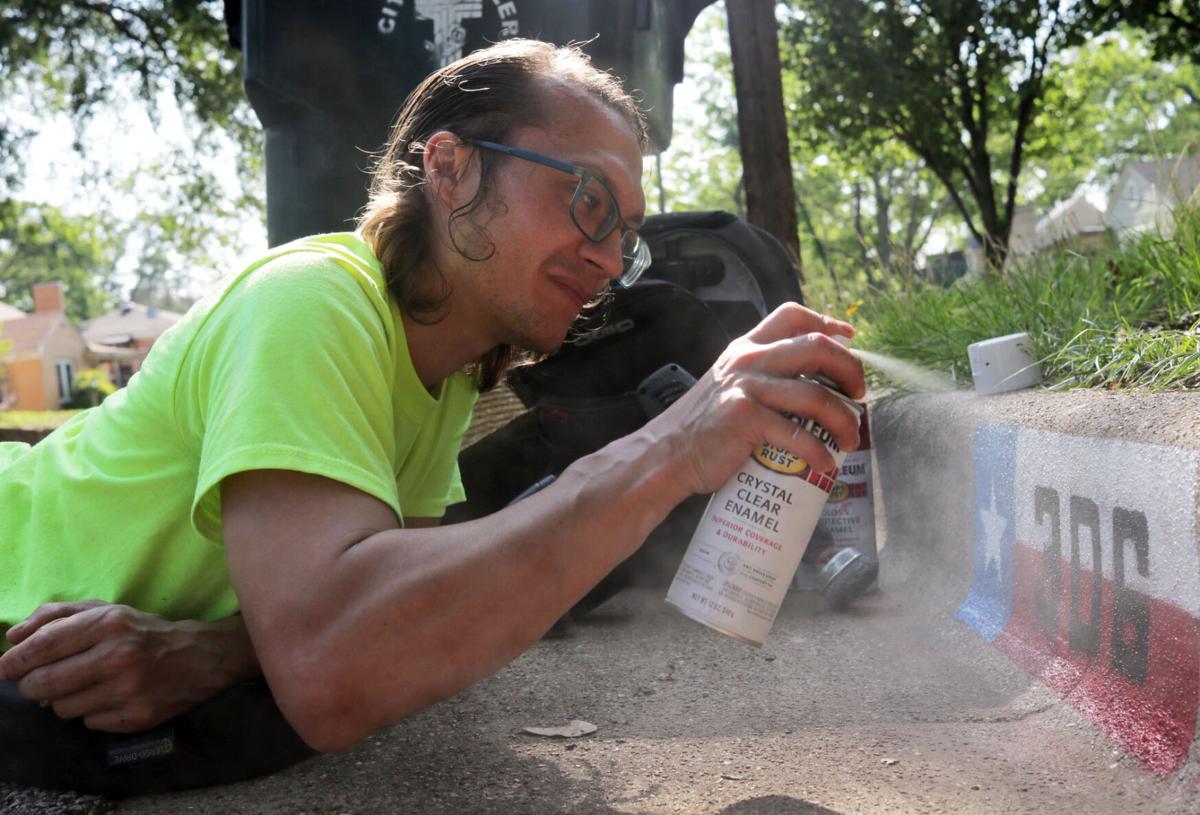 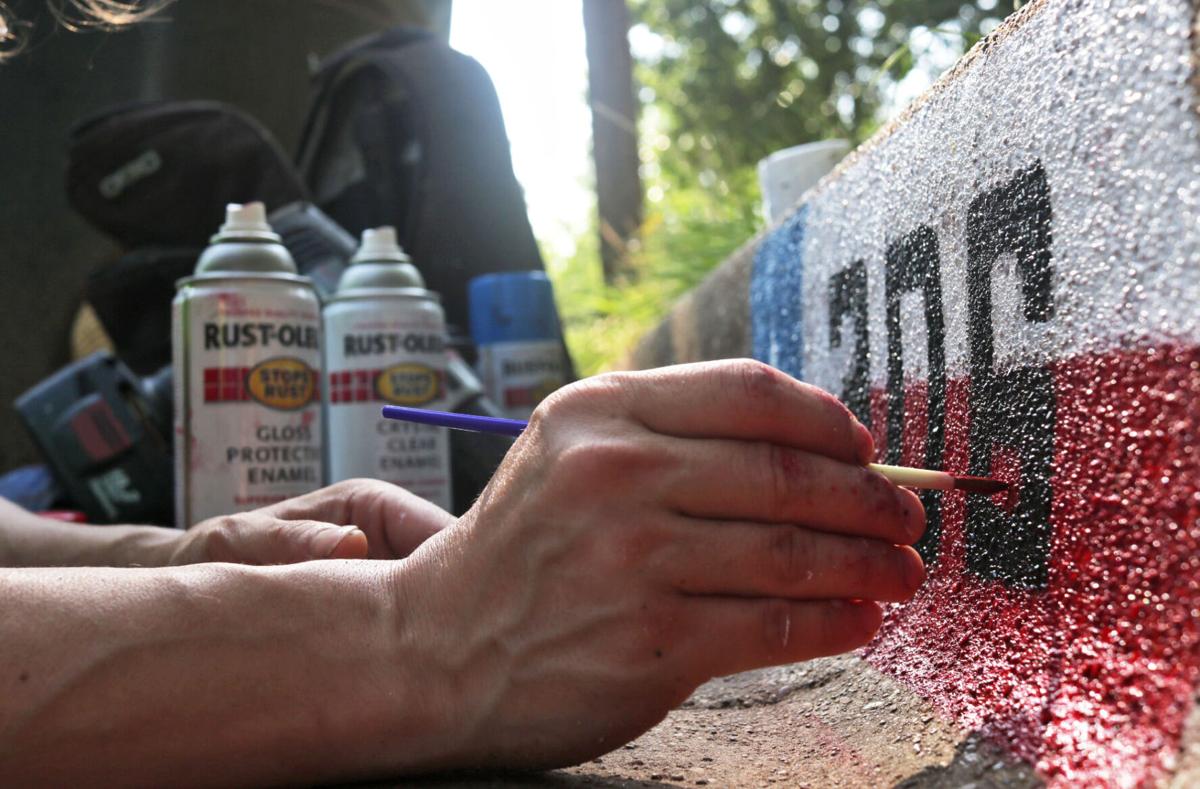 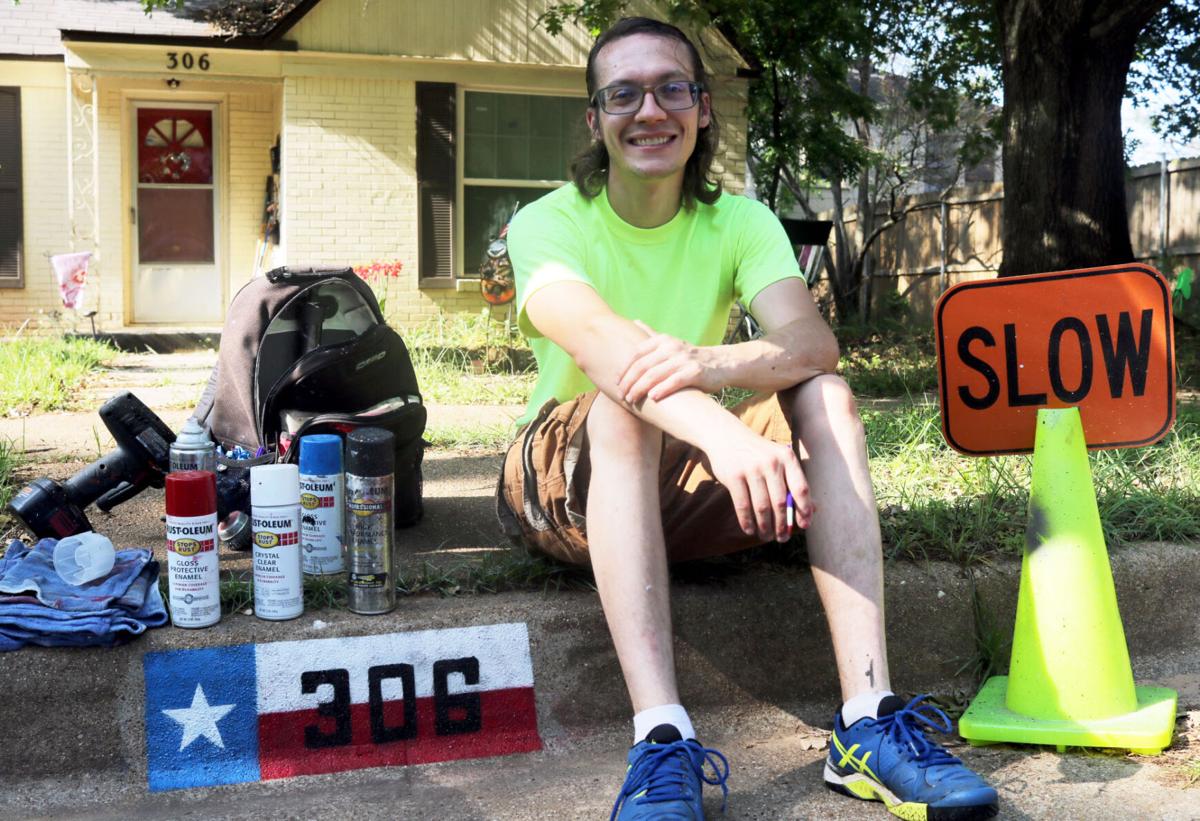 It started when a pizza delivery person couldn’t find his home one evening. His curb needed to be painted with the address’ numbers to make his home easier to find. That was the moment Tyler Prock, a Wills Point native, decided to take matters into his own hands and begin painting curbsides.

A year later, he has painted entire small neighborhoods in Tyler and has the dream of being asked to paint for a homeowner’s association.

When Prock came to Tyler to attend Tyler Junior College and eventually UT Tyler, he worked as a bookkeeper for a local business.

When the idea of painting on Tyler curbsides at local homeowners’ curbs came to him, he decided to take on the side venture as a small business known as Tyler’s Curbs.

“It came down to painting curbs and getting an ice cream truck. At the time, I didn’t have the capital for the ice cream truck, so I started painting the curbs,” Prock said.

He knew he wanted to have another business venture, so painting it was.

“I know what I would want mine to look like, so I just do my best. In addition to the spray, I also use paint brushes to make it look just perfect,” Prock said.

In order to become a certified curbside painter, Prock had to go by the city of Tyler. Prock said he was told he couldn’t do any logos or paintings, other than the numbers on the curbside.

“I went back to the city and I asked them, ‘People are asking me to (paint designs)? But the law says it’s considered graffiti. Isn’t that strange because they’re asking me to come paint it, it’s not like I’m randomly showing up, painting school logos on places,’” Prock said.

Prock said the city officials told him they wouldn’t penalize him. Prock’s response was he didn’t want the city going after anyone, not just him.

So eventually, the city changed the rule and permitted curbside art such as what Prock creates.

“It’s fun and challenging. Usually I have other work to do, but since I moved back to Denver, I haven’t gotten (a job) yet,” Prock said.

In 2016, Prock made the decision to move to Colorado with his wife. The pair suffered from body pains, such as scoliosis and fibromyalgia. According to Prock, their doctors had them on 16 strong painkillers combined, some of which kept changing to higher dosages.

The two decided to take matters into their own hands and take control of the sobriety they were determined to keep, so they moved to Colorado. Medical cannabis saved their lives, Prock said.

“We thought, let’s give medical cannabis a shot before we continue this lifetime of getting pills and such,” Prock said.

The curbside artist said he and his wife were in Colorado for a total of three months, until they were completely pill free. Since the two have moved back to Texas, Prock said they abide by the law and have turned to CBD for their medical issues.

During the time Prock was in Colorado, Tyler’s Curbs was paused. Prock had a person helping him paint for a few months, but said he wasn’t accepting new customers and was not actively painting curbs.

After living in Colorado for a few months and after the symptoms of pain eased, Prock said he and his wife decided to move back to Texas when the COVID-19 pandemic hit because they were concerned for their family members in Tyler. Both Prock and his wife’s grandparents have dementia, so moving back was the best decision to make.

“I have family and there’s young nieces and nephews, and I thought, ‘I sure do miss them’ and the city will be there, and there’s lots of things to do in Texas, too, so we’ll just live here for a little bit,” he said.

Today, Prock conducts his business mostly over social media, where people mention him after he paints their curb. He usually gets messages requesting him to visit other homes to make their curbs colorful.

His Facebook page for the business is Tyler’s Curbs. He said social media is more effective, because he also takes electronic payments from CashApp, Venmo, PayPal, to just cash.

“Most people get artwork, so it works out to about $30 a curb. Some people are gracious enough to tip,” he said.

When contacted, Prock asks the homeowner for the address so he can arrive, and the entire process of painting the curb is about an hour. If the homeowner is present, Prock said he likes to meet and talk, but if the homeowner isn’t there, he just gets his job done and leaves.

While he’s painting a curb, Prock uses a traffic cone that says, “slow,” so drivers can drive with caution while he finishes his work.

When he first started, Prock said he only painted a couple a day if he worked hard and put out flyers. Now, he does three to four per day every day, and he has a hard time keeping up.

He said the most common design requested is the Texas flag. In total, he has painted over 100 different designs in East Texas. The most interesting one he painted was a Super Mario design, he said.

“I wake up to five or 10 messages on my phone, between my Facebook page and NextDoor and just getting text messages. I usually get three or four at least a day,” Prock said. “This year has been the best year ever by far and it’s been busy.”

Prock’s greatest accomplishment since he began his small business is completing an entire neighborhood, but his dream is for a homeowner’s association to invite him to paint an entire community.

He also dreams of traveling the United States and sharing his artwork with anyone who would like their curb painted.

While in Colorado, Prock said he was heavily inspired by the various pieces of art in Denver where he lived. Since he’s come back to Tyler, he said he enjoys the artwork on the traffic boxes around the city.

Prock also wrote a book to help others start their own small businesses by painting curbs on Etsy.

“There’s a lot of curbs. There’s like 100,000 people in Tyler. I’m not going to be able to paint them all and I don’t think I want to paint them all, and it’s nice to share and that’s just how I was taught to do things,” he said.