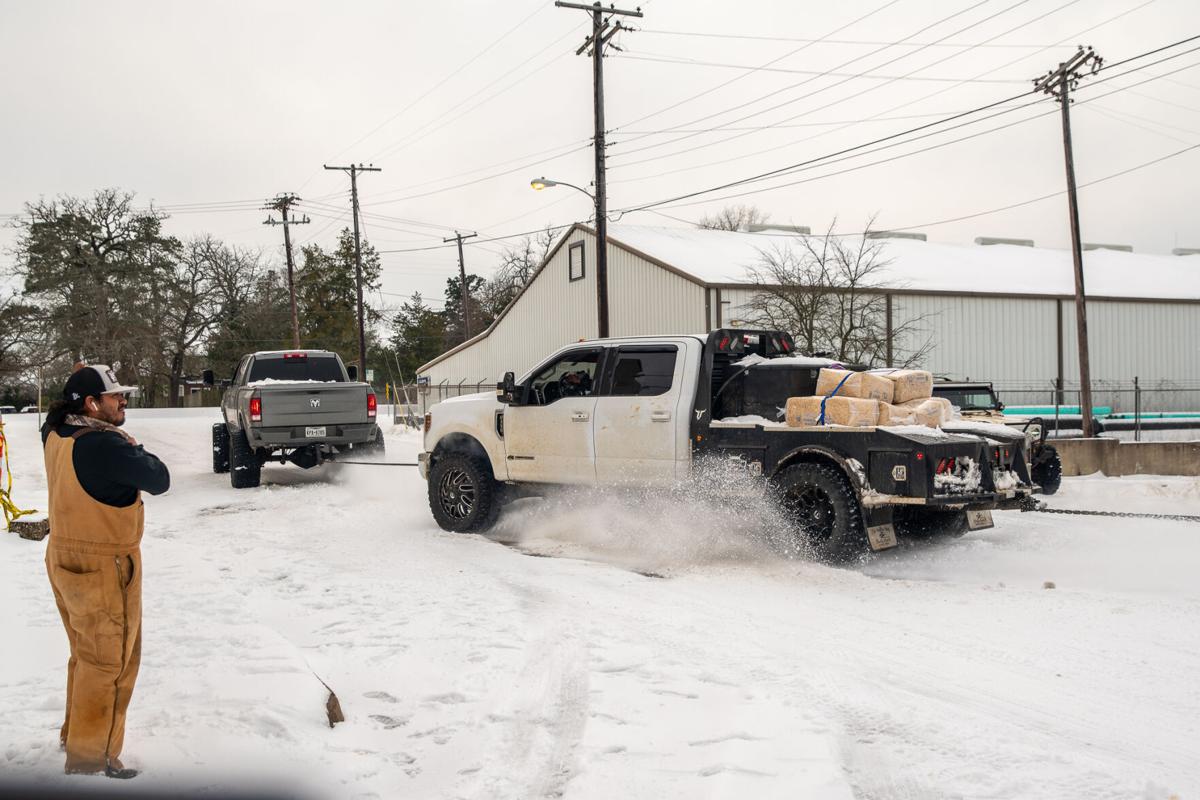 {div}{span}Ramiro’s crew David Serna and Erick Castrejon use heavy duty trucks to haul a person’s 18-wheeler that was unable to move a vehicle from downtown Tyler.{/span}{/div} 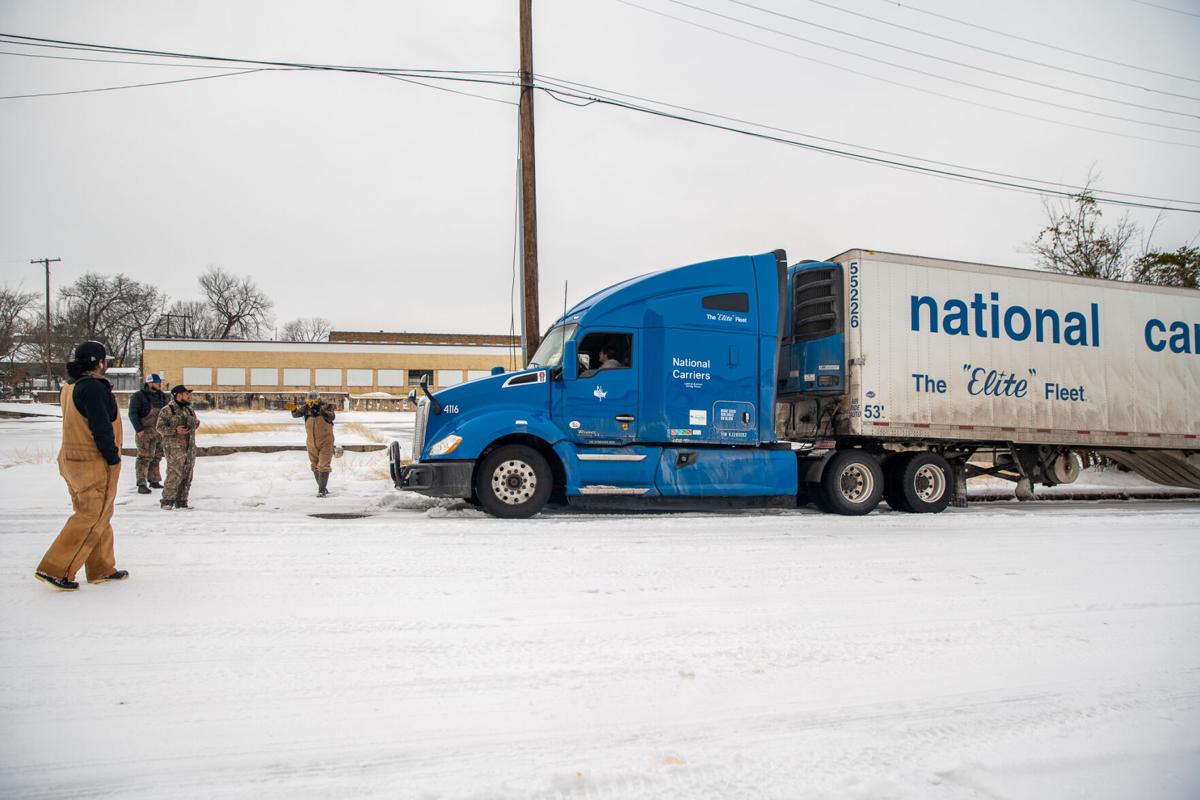 Ramiro’s crew talk as they attempt to help a person’s 18-wheeler that was unable to move a vehicle from downtown Tyler. 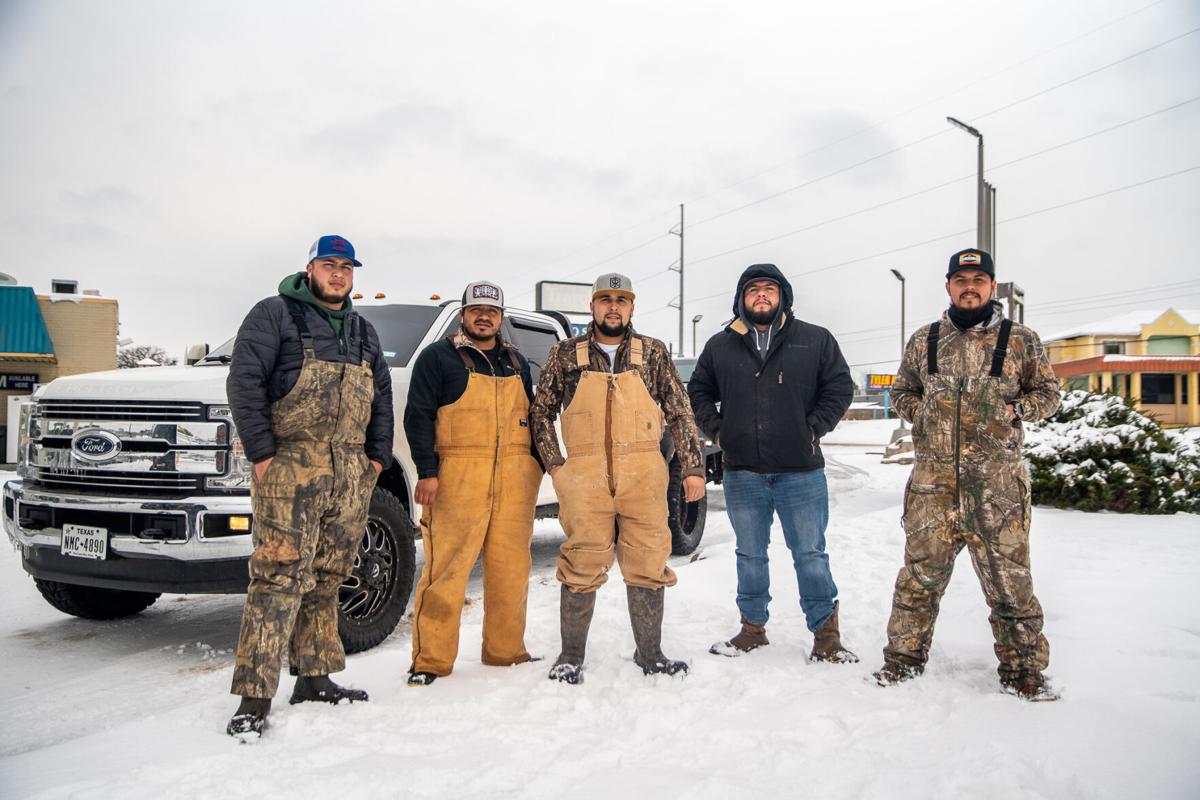 Erick Castrejon, Roman Cervantes, Jacob Arroyo, David Serna, and Ramiro Medina take a group photo while on a break after helping three people stuck in the snow around the Tyler area. 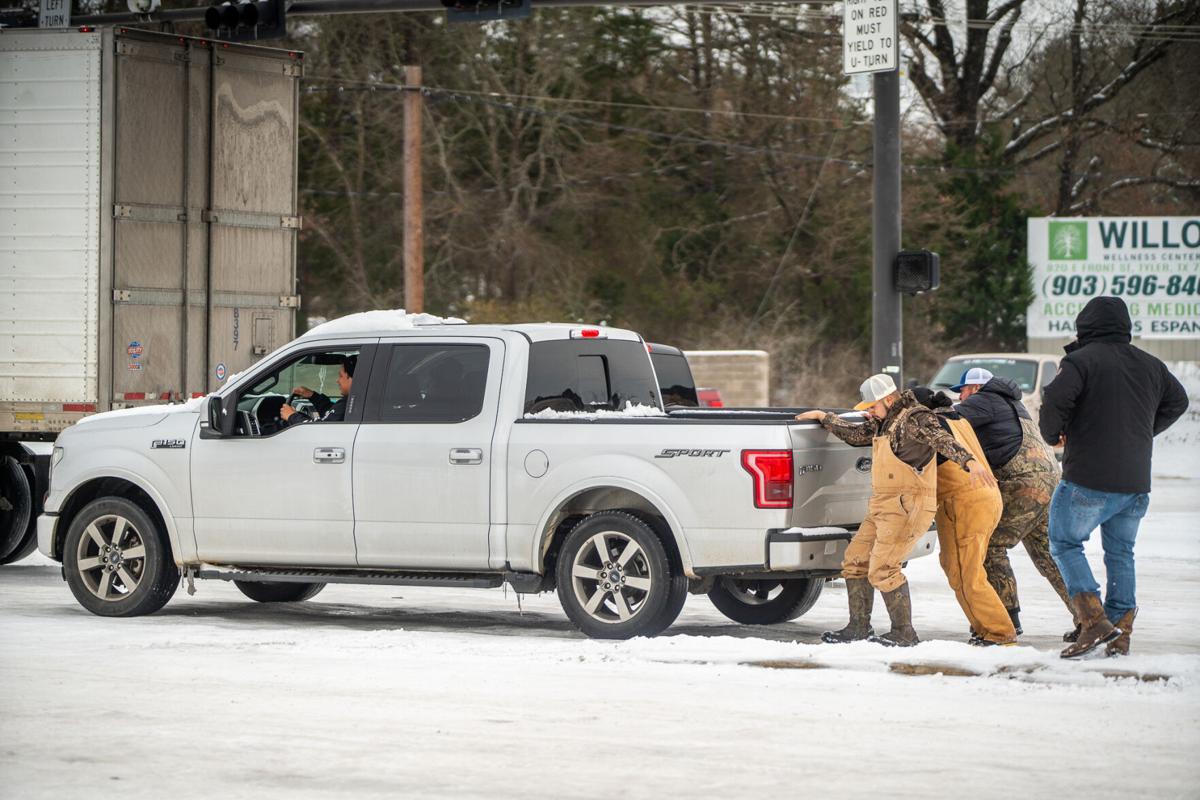 Jacob Arroyo, with help from Ramiro’s crew, help a truck after the driver got stuck crossing the Loop 323 and U.S. Highway 69 in Tyler. 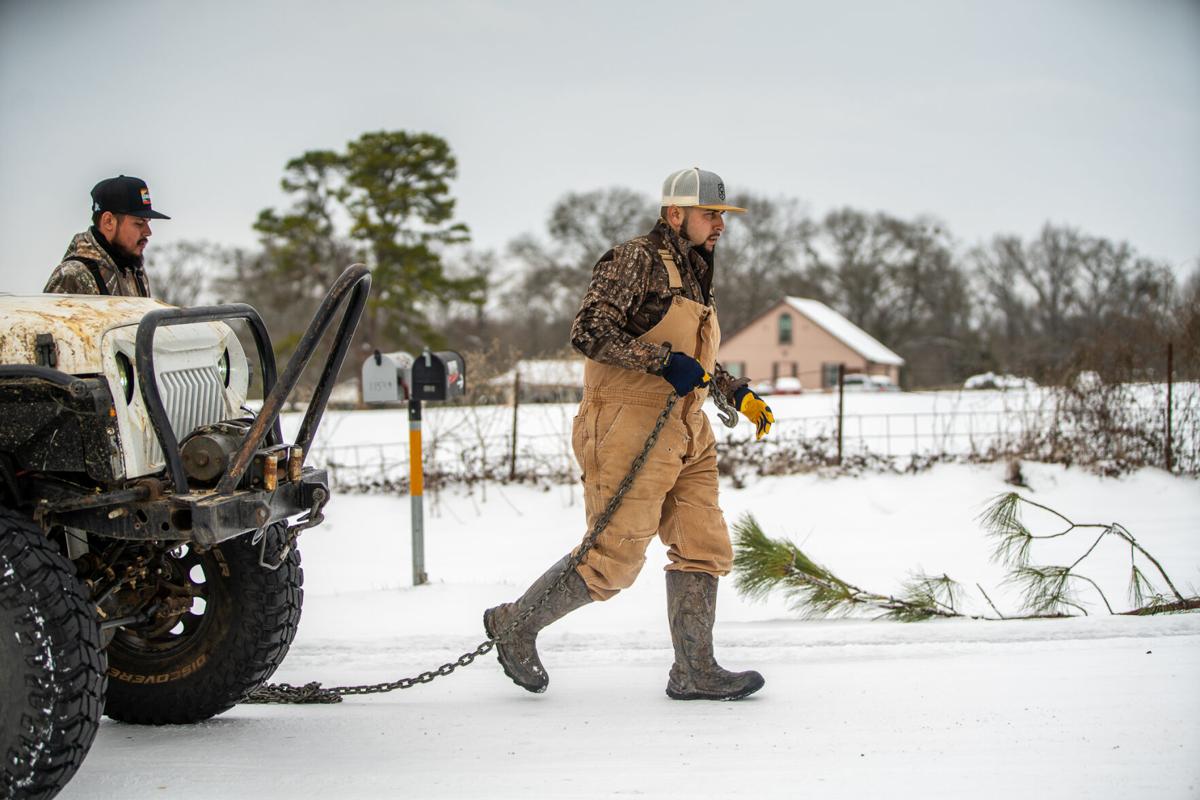 Jacob Arroyo connects chains from his Jeep to a person’s truck who was stuck after sliding into a ice ditch outside of U.S. Highway 69 toward Lindale. 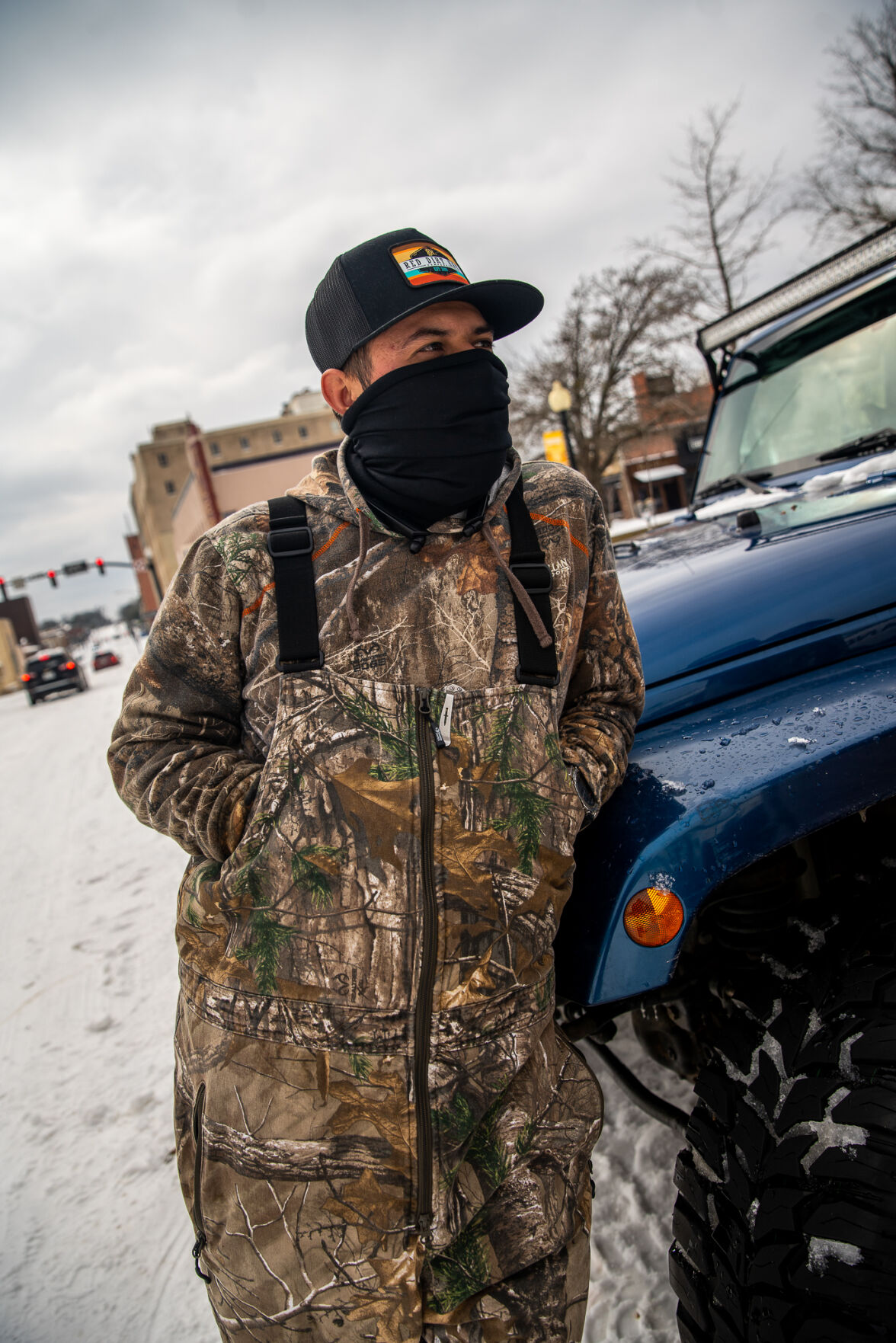 Ramiro Medina waits for more of his friends to arrive around the downtown Tyler area to begin their routine of helping people stuck in their cars due to the snow and ice.

{div}{span}Ramiro’s crew David Serna and Erick Castrejon use heavy duty trucks to haul a person’s 18-wheeler that was unable to move a vehicle from downtown Tyler.{/span}{/div}

Ramiro’s crew talk as they attempt to help a person’s 18-wheeler that was unable to move a vehicle from downtown Tyler.

Erick Castrejon, Roman Cervantes, Jacob Arroyo, David Serna, and Ramiro Medina take a group photo while on a break after helping three people stuck in the snow around the Tyler area.

Jacob Arroyo, with help from Ramiro’s crew, help a truck after the driver got stuck crossing the Loop 323 and U.S. Highway 69 in Tyler.

Jacob Arroyo connects chains from his Jeep to a person’s truck who was stuck after sliding into a ice ditch outside of U.S. Highway 69 toward Lindale.

Ramiro Medina waits for more of his friends to arrive around the downtown Tyler area to begin their routine of helping people stuck in their cars due to the snow and ice.

Before the winter storm, Ramiro Medina was busy hauling gravel and dirt with his trucking company, Medina’s Trucking.

Now his days are slower without work, but instead of staying home and waiting for the snow to melt, he’s out delivering meals his wife cooks and pulling people out of the snow with his buddies.

Medina has been fortunate enough to still have water and electricity, but he recognized quickly that not everyone is in the same situation during the winter storm.

Since Monday, Medina and his friends began having morning meetings over the phone.

“We kind of arrange who’s going to go to what side of town. If one of us needs help, we just go and help them,” he said.

Medina said he’s helped about 15 to 20 people in cars, and about 10 families with propane gas for their stoves or heaters.

Medina has a family of his own — two kids and a wife.

“It was kind of hard for me to go out because I would still think about my family, because I’m putting myself in danger out there in the streets, but I’ve just been cautious and careful,” he said.

When he gets messages for help, Medina draws out a route for the day.

“Monday, there was a man that was running out of propane gas and his daughter put a post on Facebook. I really thought about it because I didn’t know how the roads were. It started with that, and then some people reached out after him on the same post and I just called them,” Medina said.

Medina then went to pick up the propane tank and his friends decided they’d go out and help as well.

“I went prepared, too. I grabbed extra change, I had a five-gallon gas tank in the back just if somebody needed more gas, little stuff like that,” he said.

Medina said he was only providing transportation and he wouldn’t charge anyone for how much it was, but the people gave him tips and asked how much it was.

“I would tell people, ‘Y’all don’t have to pay me, it’s fine.’ They would just hand me $20 or $10, some people would just take off, I don’t mind. But at the same time, I am spending fuel, some of my time. We were taking tips, so it kind of helped out,” Medina said.

He said he was mostly providing transportation and pulling cars out of the ditch.

Medina recalled one instance when an older man was panicking about his last propane tank.

“He was like, he wasn’t going to make it. He was in a location where there was a big hill. I saw the hill and I thought I wouldn’t make it myself, so I actually walked down to his RV. He came out, he was barely able to walk out in the snow,” Medina said.

Medina said it took him five hours to get the gas tank to the man because he had stopped on the way there to help other people.

“He called me throughout the day maybe like 10 times. He thought I had I guess, stolen his propane tank. I was like, ‘No sir, I was helping other people,’ but once I got back to him, I saw he was really happy about it. He was like ‘I’m going to make it now, a couple more days’ that kind of stuck the most because he was somebody a little bit older,” he said.

Medina said that as a Hispanic man in the community, he sometimes has to prove that he’s a good person.

“People sometimes don’t see us right, but all my friends, we try to work and help out. We’re not bad people as people see us. That’s what we try to show. We’re responsible, we’re helpful, we care for anybody,” Medina said.

When he gets off of work, Medina wears his dirty work clothes. He said he’s been treated differently in those instances.

“Let’s say you go to a bank or a store, people see you some kind of way. Once you make a big transaction, they wonder how you’re doing it, and they say we’re doing some kind of illegal work, when we’re actually working the right way. We work every day, Monday through Saturday, sometimes Sunday, all day long. It’s not a couple of hours, we work 12, 13 hour days,” he said. “What we’re doing, my group, we’re hard-working people, we actually enjoy what we’re doing. Since the beginning, we just like this kind of stuff. There’s days that it starts snowing, that’s what we like. This is what we do. We’ll go out in our vehicles, get muddy, get in the lakes, we have our hunting coats for the winter, our water boots, we have our hunting gear, face, mask gear, so it’s another fun day for us.”

What Medina wished people knew about the Hispanic community, is not to judge a book by its cover.

“Always give everybody an opportunity. Don’t judge nobody because they might be somebody generous or might have a better heart than that other person, just don’t judge a Hispanic that’s walking in with a dirty pair of jeans, he’s probably fixing one of his 10 trucks that’s making the community some money,” he said.

Medina is appreciative of everyone posting messages of gratitude to his social media.

“My friends are still out and about helping people out. We’ll be out there tomorrow pulling cars left and right out. We’re going to keep on doing it until we see there’s no more need for it,” Medina said.

There are certain rush hours where the group sees more people on the roads. They see a rush in the morning, between 10 a.m. to 12 p.m., then again around 3 p.m. to 6 p.m., and then again in the nighttime.

“I usually don’t go out at night because I think it’s a little more dangerous and I have a family to come to. I try to be a little more cautious,” Medina said.

A few months ago, Medina was sick with COVID-19. Since being sick, his lungs have been affected, but he still chooses to wake up everyday and help the community. Aside from dealing with his health, he said the only other hard part about the process is the snow and the cold.

“Usually we get minor scratches on our hands, on our face, a couple of cuts here and there but nothing major,” he said. “I have to get underneath the cars, get snow on my face, on my back, get dirty, it’s cold so we start getting wet on our feet, our hands.”

Medina said pulling smaller cars is harder because they don’t have connections.

Medina’s Jeep that he’s been using to help was a graduation gift for his wife, who graduated from Stephen F. Austin State University with a degree in social work.

The family plans to continue to help people in the Tyler community until the snow clears.