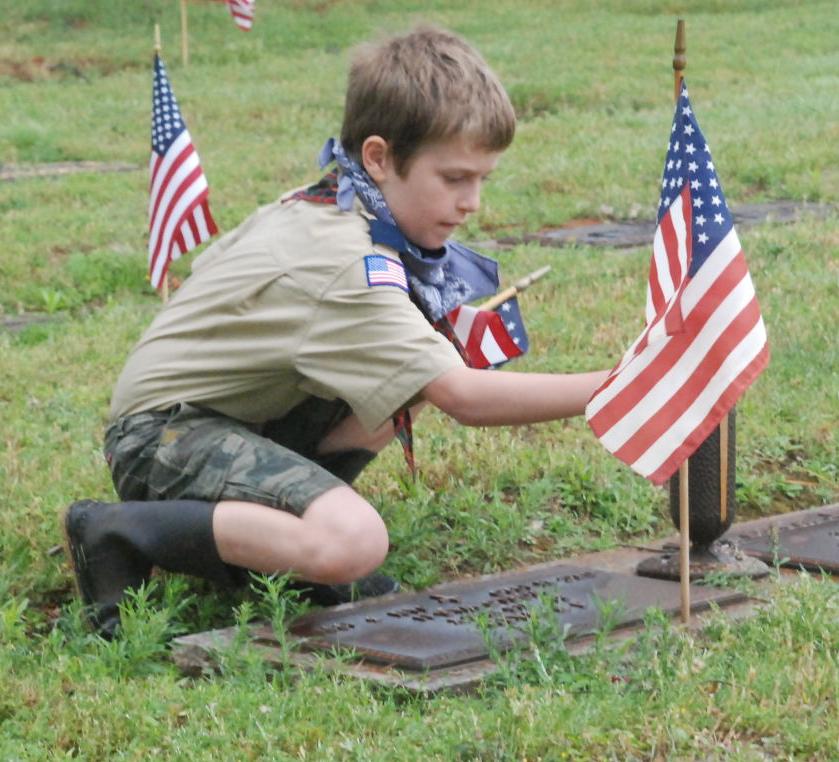 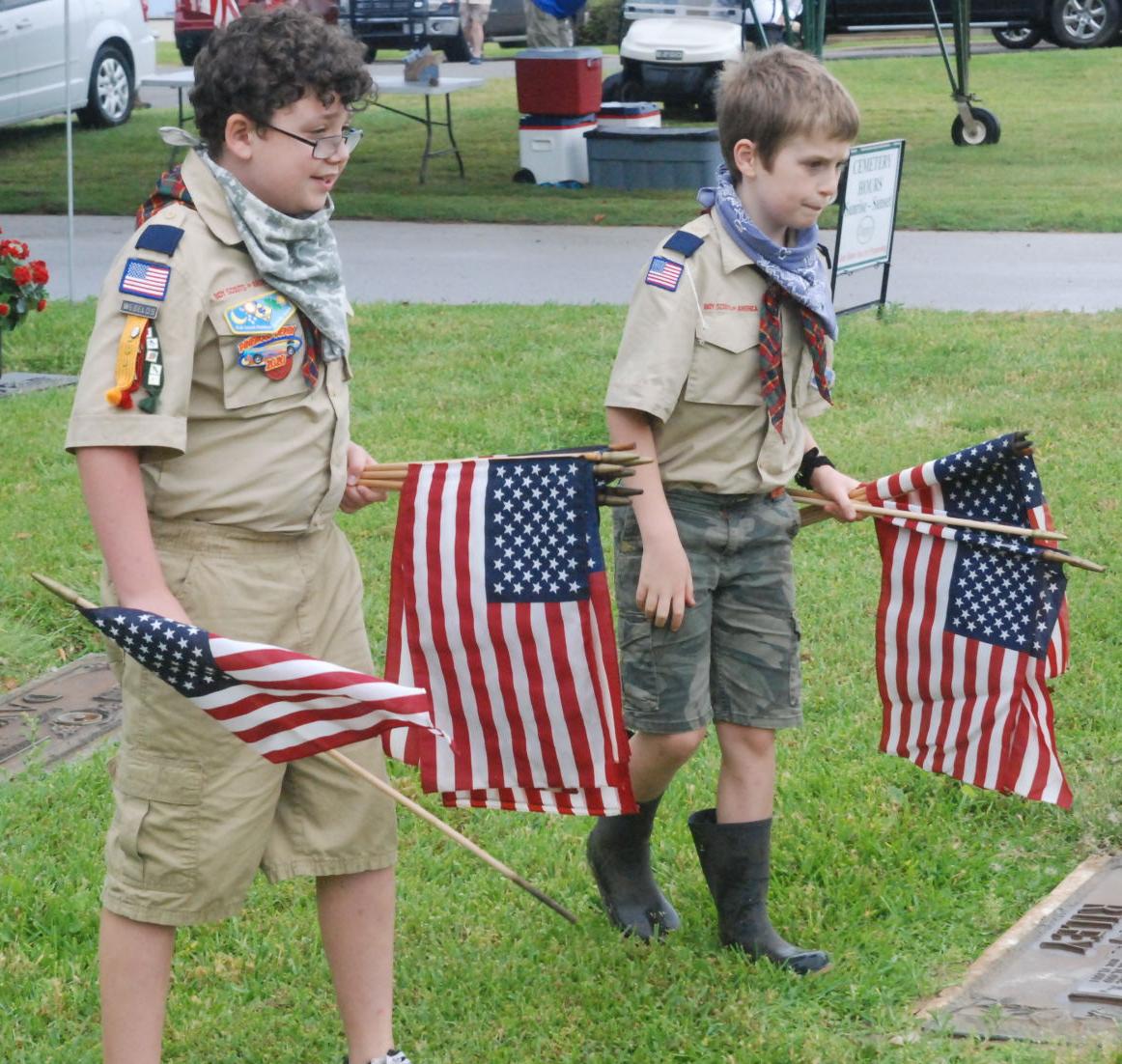 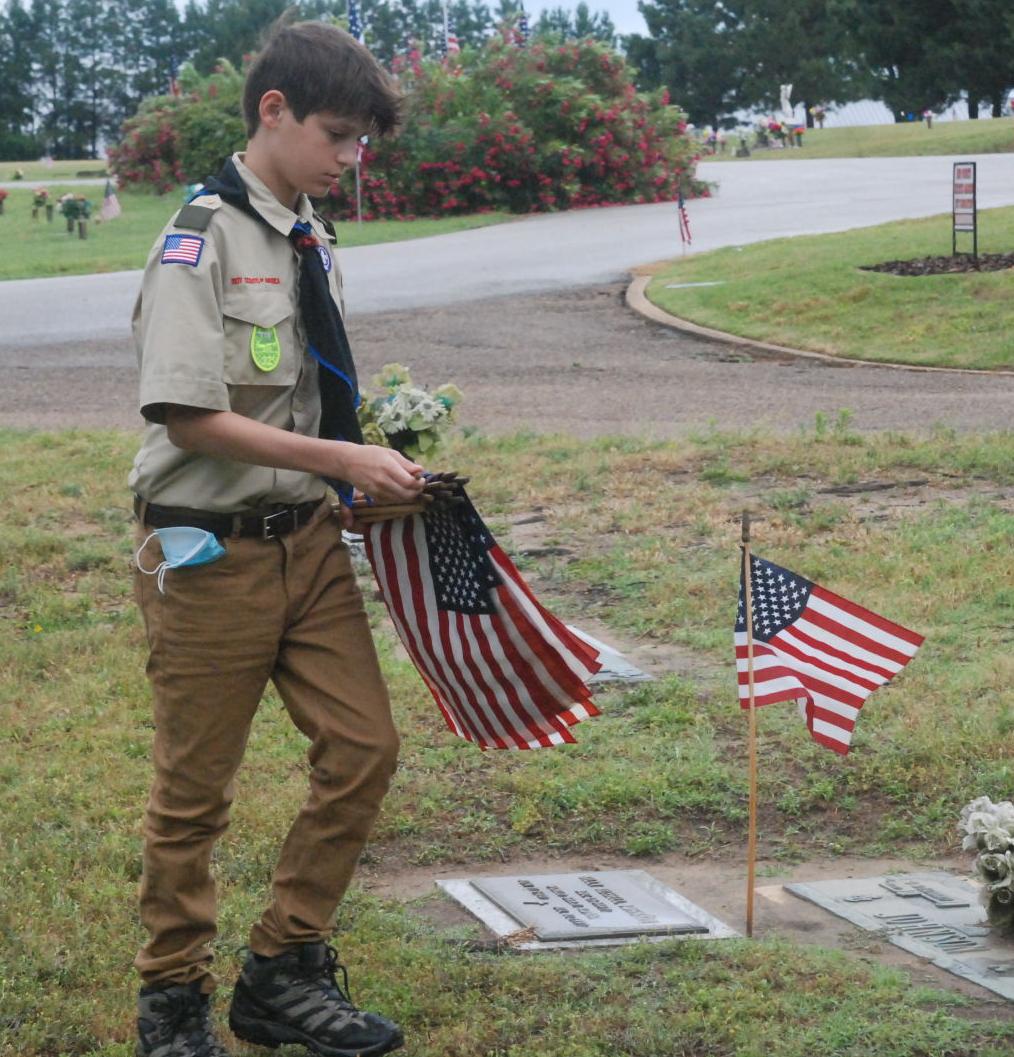 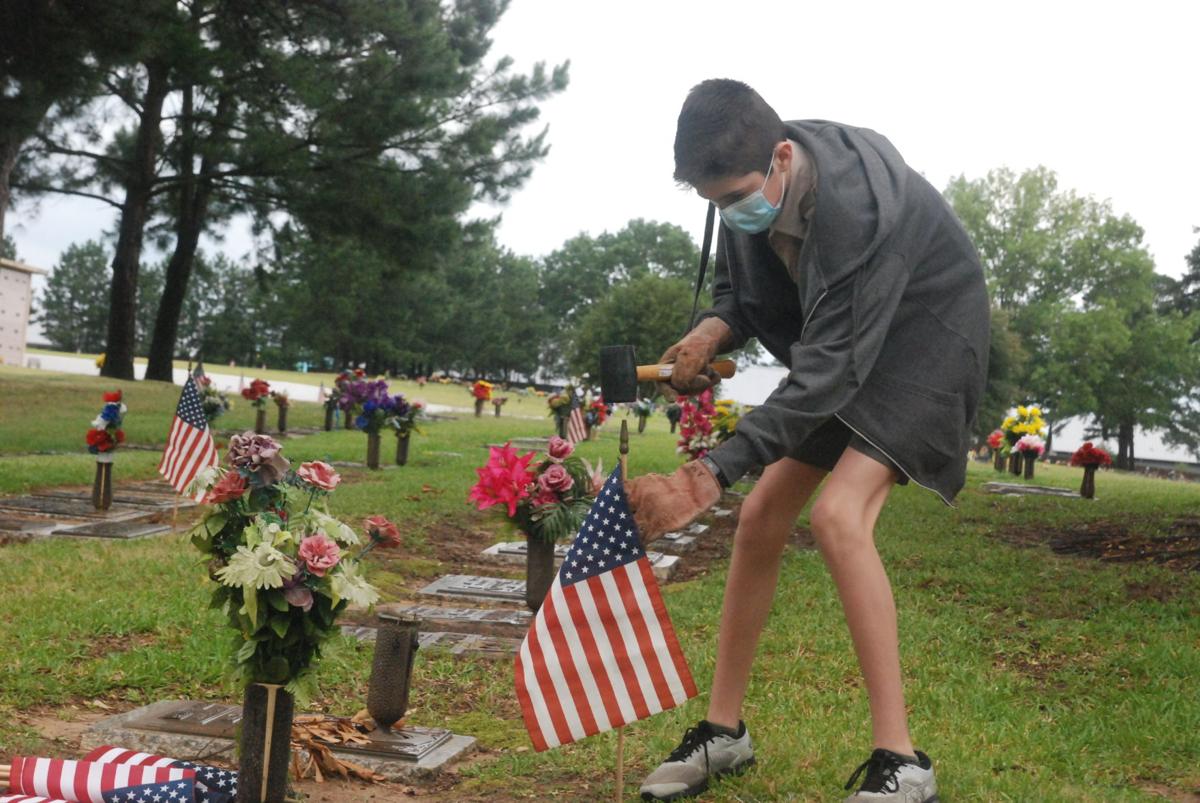 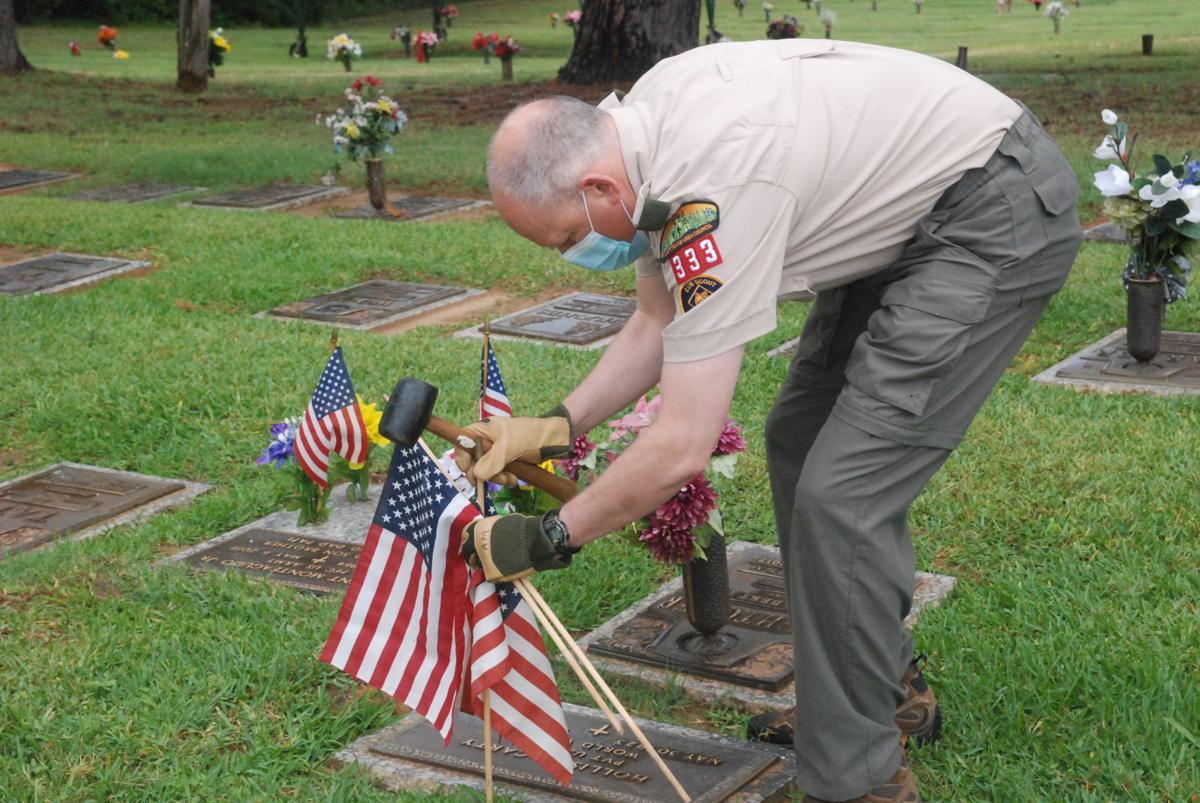 Anthony Meads, a Troop 333 assistant leader, uses a small hammer to place an American flag on a veteran’s grave at Cathedral in the Pines Memorial Garden in Tyler Saturday morning. 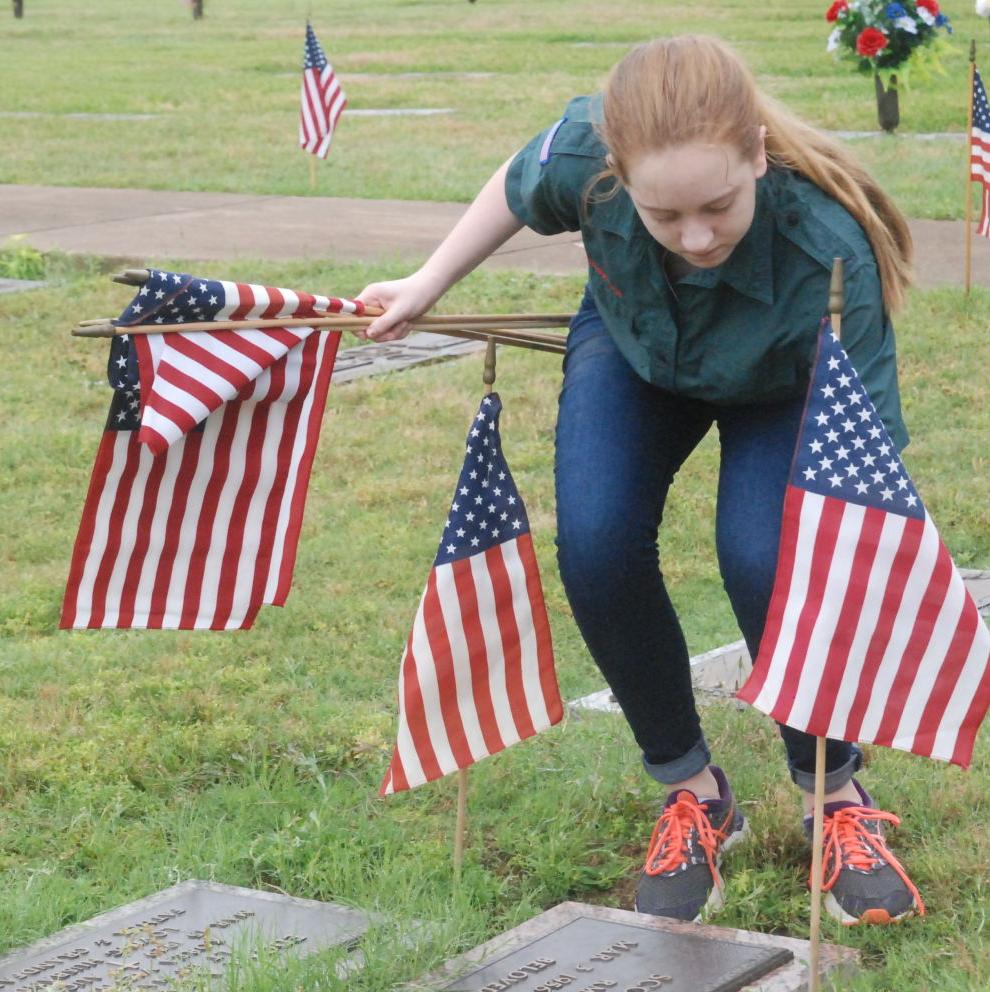 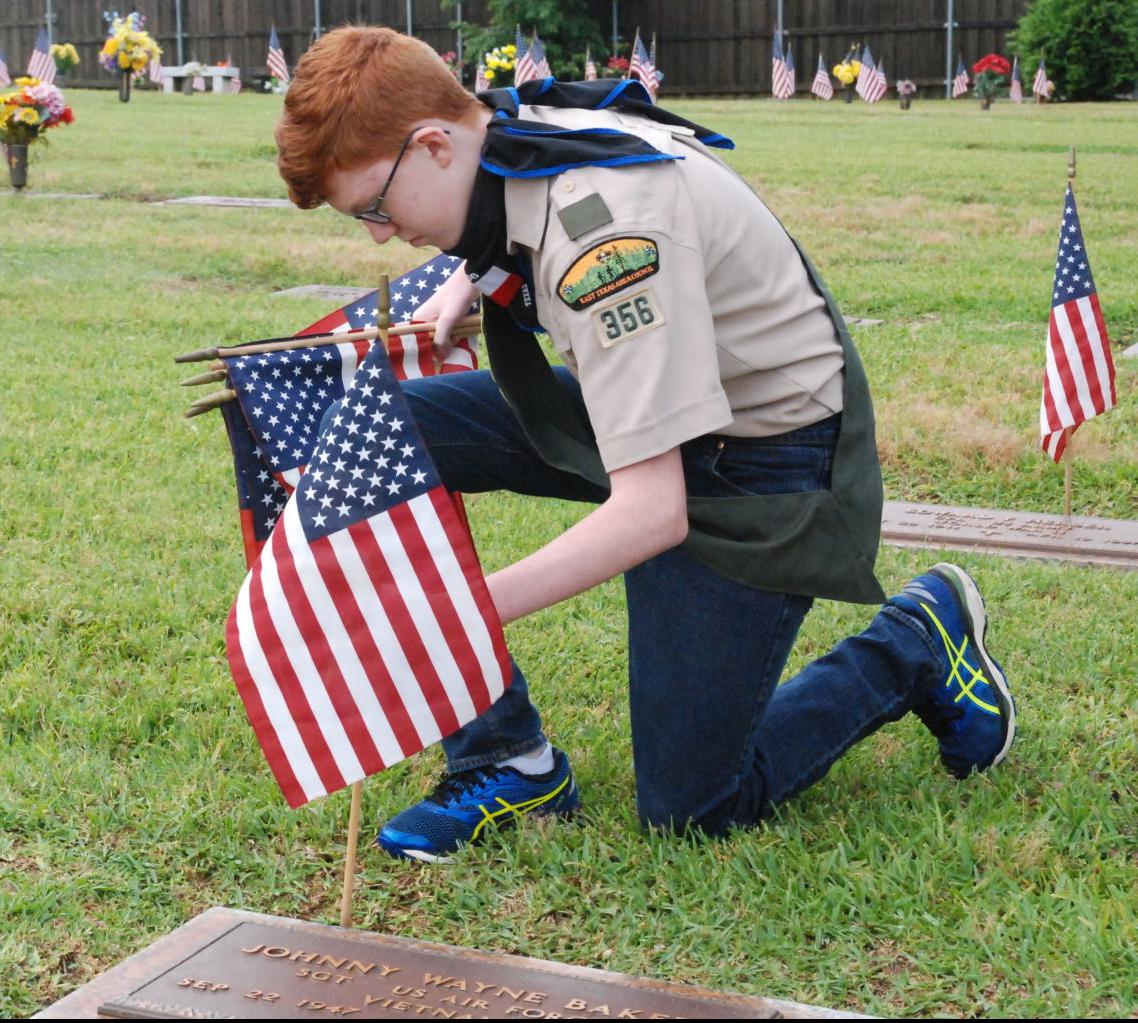 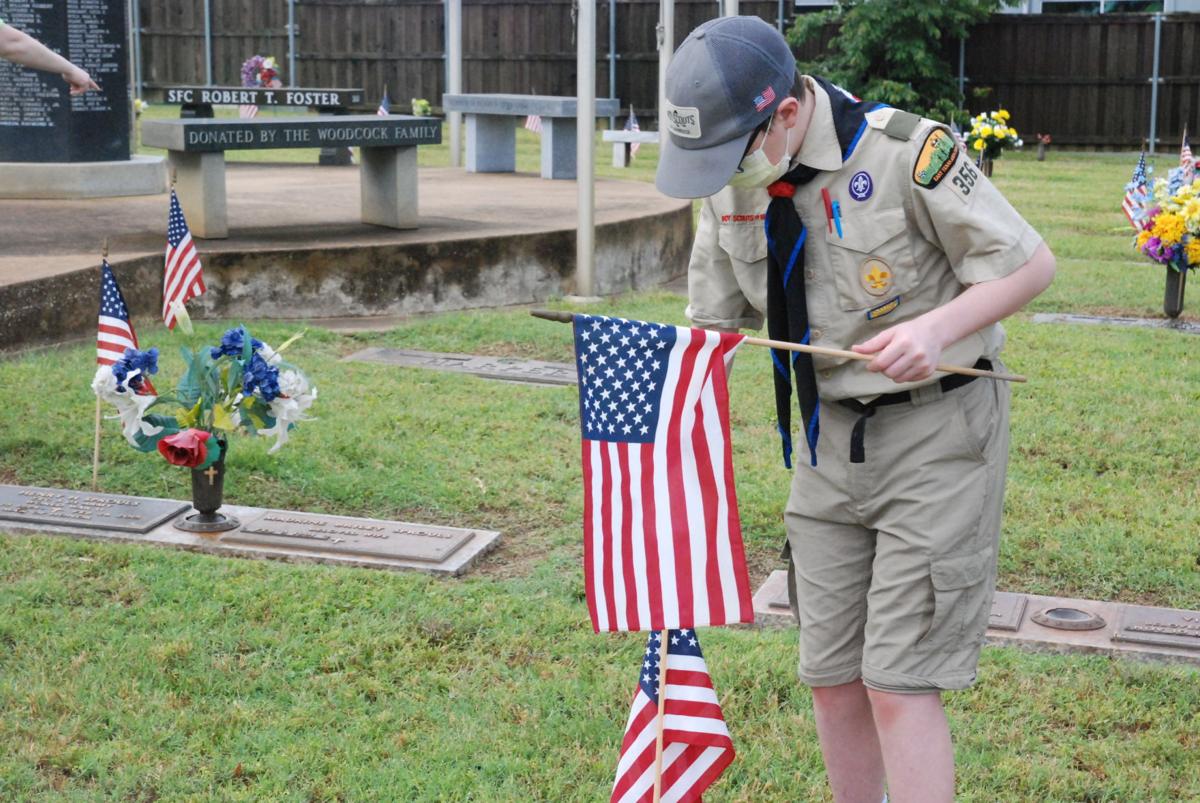 Anthony Meads, a Troop 333 assistant leader, uses a small hammer to place an American flag on a veteran’s grave at Cathedral in the Pines Memorial Garden in Tyler Saturday morning.

Boy Scout Clayton Ellis spent his Saturday morning placing American flags on the graves of veterans to honor their sacrifices ahead of Memorial Day.

Ellis, 12, said putting flags on the graves shows respect to the veterans that served in the military. This year was his second time laying out the flags for Memorial Day.

Through Saturday’s community service, Ellis said he learned the importance of hard work. He is a member of Troop 356 based out of Lanes Chapel United Methodist Church.

Ellis was among several Tyler area Scout Troop members who placed flags on the veterans’ graves at Cathedral in the Pines Memorial Garden and Tyler Memorial Funeral Home — Cemetery and Mausoleum in Tyler.

Ellis has been a part of the Boy Scout organization for seven years, including five as a Cub Scout and two as a Boy Scout.

“I like the summer camps and I like the community and hanging out with friends,” he said.

Alexander Opella, 12, a Troop 356 Boy Scout, said he enjoys helping people and placing the flags shows support to veterans and their sacrifices.

“It teaches some of the things they learn about in school,” he said. “We’re happy that we can come and provide this service.”

Planting flags at the cemetery also gave the Scouts a chance to have face-to-face interactions after not being able to physically meet with their troop members since early March, George said.

Ellis’ dad, Robert, said he and his son are looking forward to in-person troop meetings returning, after the COVID-19 pandemic caused the meetings to become virtual.

Alice Osburn, 16, a Venturing Crew member, has been placing the flags at the cemetery for about three years.

Venturing Crew is a Boy Scouts of America program for both males and females from ages 14 to 20, according to the BSA website.

Michael Shaw, Scoutmaster for Troop 370, said the greatest lesson is reminding the Scouts of the real reason for Memorial Day, which is to honor military service members who sacrificed their lives.

“Scouts are all about serving and how to do it cheerfully and with a good attitude,” Shaw said. “I think it’s good for the community to see the youth doing something they’re not getting a reward for but being good community servants.”