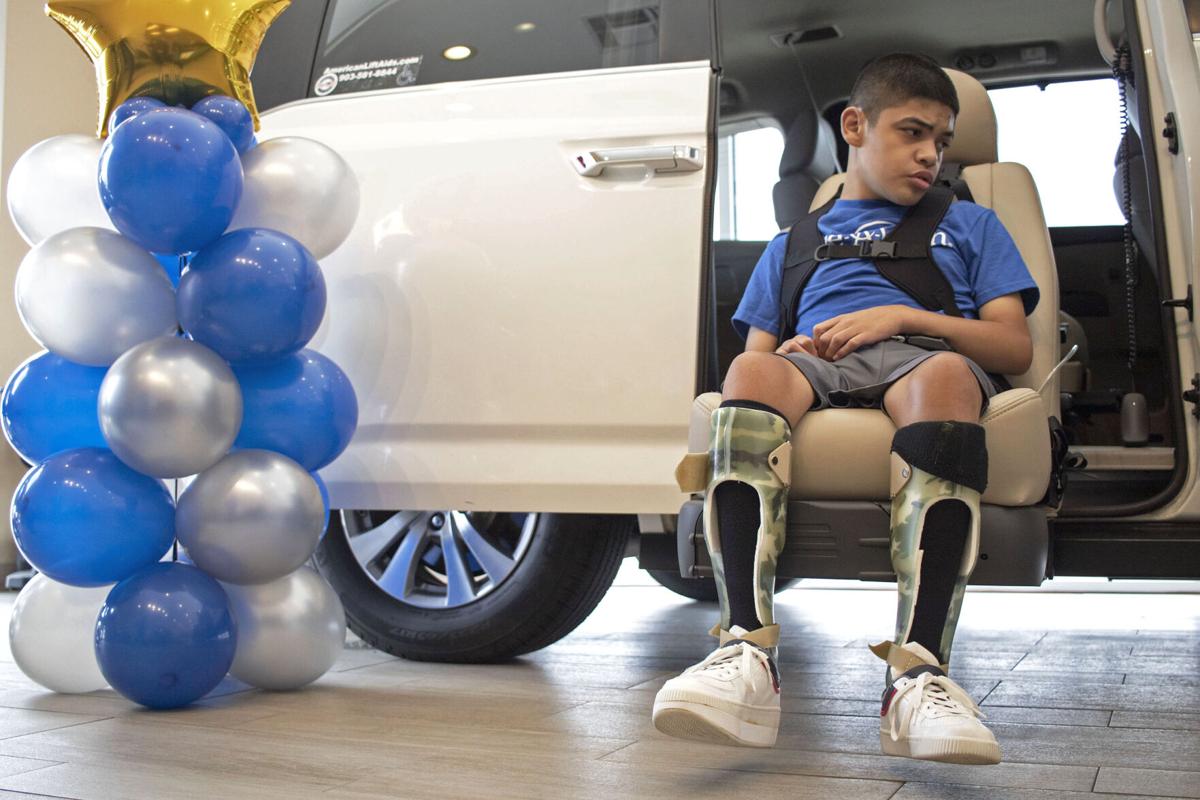 15-year-old Alejandro Rivera, who has cerebral palsy, sits on mobile seat donated by American Lift Aids and BraunAbility on Wednesday. The donation was a collaboration with Make-A-Wish Foundation to grant a wish for Rivera who has been on the wish list for two years. 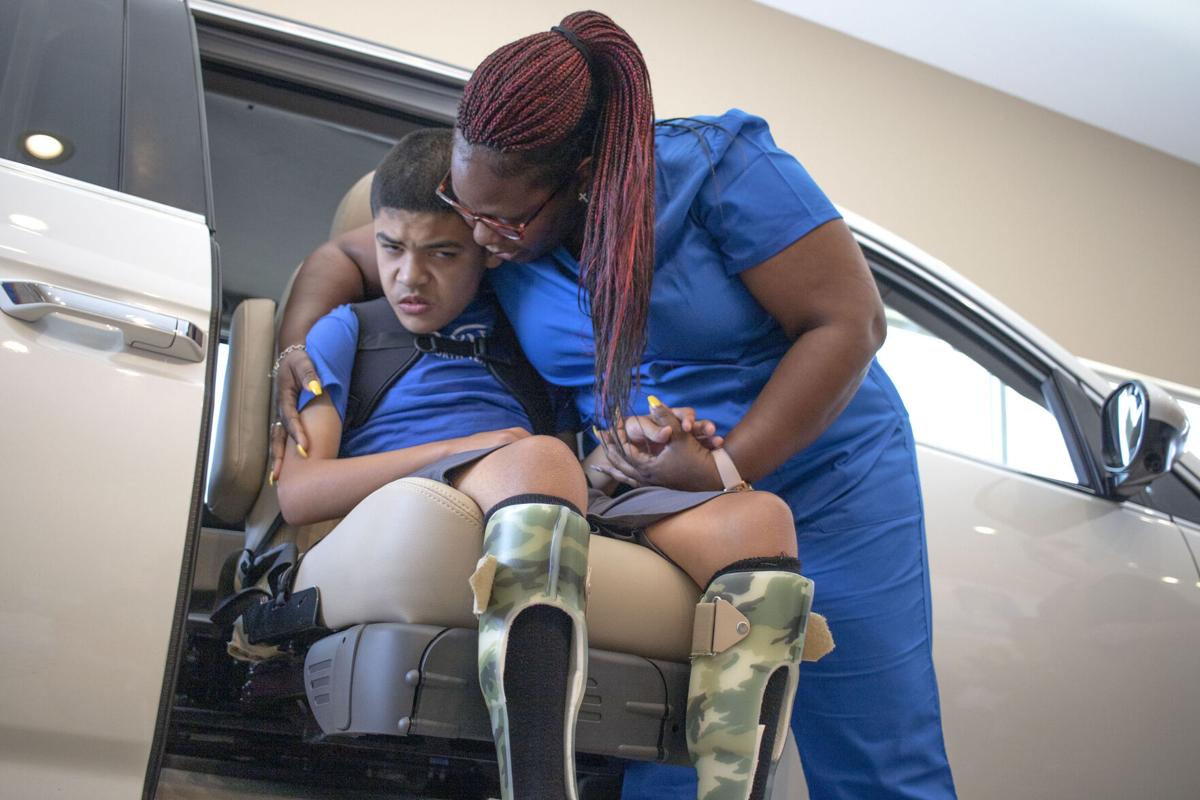 Childhood nurse Von Gretshun Smith-Gross hugs and congratulates 15-year-old Alejandro Rivera who was granted his wish of a mobility seat on Wednesday afternoon. 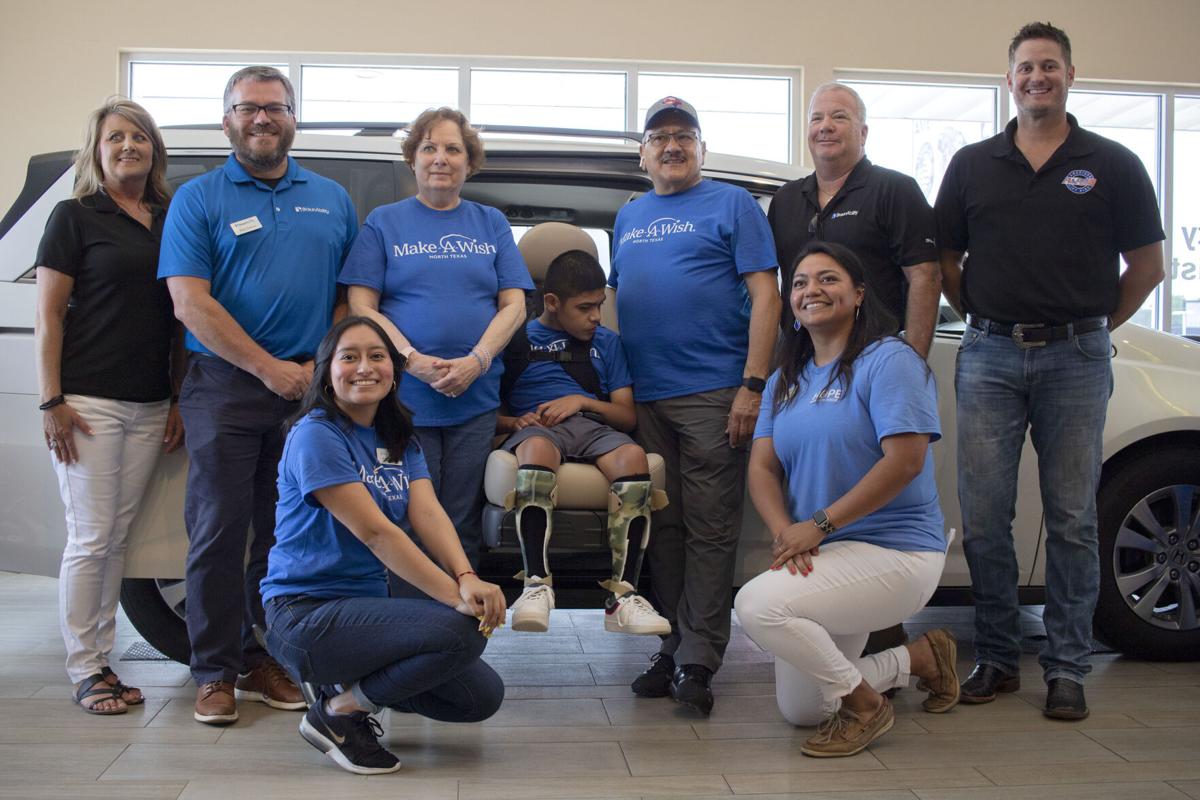 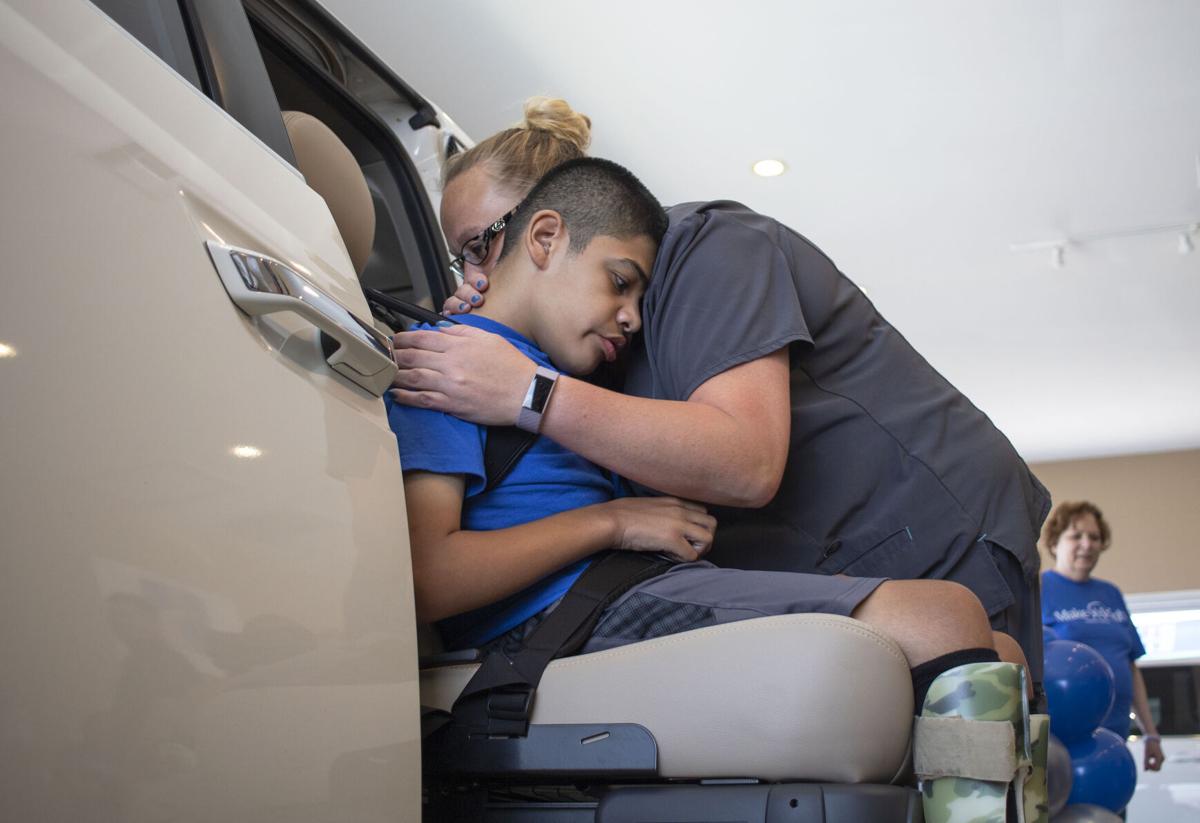 During Alejandro Rivera’s Make-A-Wish day, nurses gathered to celebrate as he received a mobility seat. The seat was donated by American Lift Aids and BraunAbility in collaboration with Make-A-Wish foundation.

15-year-old Alejandro Rivera, who has cerebral palsy, sits on mobile seat donated by American Lift Aids and BraunAbility on Wednesday. The donation was a collaboration with Make-A-Wish Foundation to grant a wish for Rivera who has been on the wish list for two years.

Childhood nurse Von Gretshun Smith-Gross hugs and congratulates 15-year-old Alejandro Rivera who was granted his wish of a mobility seat on Wednesday afternoon.

During Alejandro Rivera’s Make-A-Wish day, nurses gathered to celebrate as he received a mobility seat. The seat was donated by American Lift Aids and BraunAbility in collaboration with Make-A-Wish foundation.

For two years, 15-year-old Alejandro Rivera just wanted to go on a car ride with his family, something that makes him feel free and happy.

Rivera has cerebral palsy level four, is partially blind and does not verbally communicate. He is a student at Tyler ISD’s Wayne D. Boshears Center for Exceptional Programs.

Wednesday afternoon, the Make-A-Wish Foundation granted his wish as he was surprised before his family, friends and longtime caregivers with a new mobility seat that will help him and his family travel easier and safer.

The wish, two years in the making, was made possible when the Make-A-Wish Foundation reached out to a family-owned American Lift Aids of Tyler, who specialize in a variety of wheelchair accessible vans, handicap trucks and SUVS, platform lifts, hand controls and other products for vehicles to help people enjoy their independence and mobility.

American Lift Aids then contacted their manufacturer, BraunAbility and was able to secure a $12,000 seat donation. Working together, BraunAbility and American Lift Aids ensured that not only Alejandro’s wish gets granted, but also covered all costs that went into fulfilling it, so that the funds saved will make it possible for the Make-A-Wish Foundation to grant another wish for a deserving child.

“The average cost of a wish is a little over $10,000. Anytime we can get donations, that literally saves a wish,” said Sarah Morado, coordinator of wishes for Make-A-Wish.

She said that all funding from Make-A-Wish North Texas comes from donations.

“Before COVID-19, we would put on events and with those events, we would raise money to fulfill wishes. With everything going on, we can’t put events on as before, so now more than ever, we’re looking for help from the community from companies such as American Lift Aids to help us grant wishes,” Morado said.

When the foundation heard about Rivera, they reached out to learn more information about him, his conditions and what he wanted.

“I was talking to his dad and he was telling me he liked car rides and enjoys traveling with the windows down, so he feels all the air and so he feels good in the car. He can’t talk much, but his family noticed that when he was in the car, he would light up and felt more happy and free,” Morado said.

Morado said the family knew this was the perfect wish to grant for Alejandro Rivera because everyone would benefit from the mobility chair.

“It’s something he can use not just now, not just for a while, but as he grows, too,” she said.

Throughout the time American Lift Aids worked to install the mobility seat into the family car, they also donated resources to provide them with a rental for the meantime, while their car underwent the upgrade for Alejandro Rivera’s wish.

Morado contacted the family and let them know the wish was coming true. Wednesday afternoon, Morado was finally able to see the wish granted.

“I feel so proud. This year and last year has been so hard that as an organization, we haven’t been able to do our job as we normally would. To be here today and to see how this is going to help his dad, his mom, his nurses, to see how just a chair, this is much more to them. They’re going to be able to enjoy this wish for all the years to come. I needed it. I needed to see that moment of hope,” Morado said.

“He has a sister in California, she’s eight years old, her name is Sabrina. She’s crazy for him. We’re going to go visit aunts and uncles in California. This seating is going to be a great help because it’s going to be easier for us to travel,” he said.

He told the story about how the opportunity came about.

“We have a phenomenal doctor. She’s helped our family receive things for Alejandro’s life to be a little easier and happier. She recommended that Alejandro would be a part of the Make-A-Wish program. It happened to be that two years ago, they accepted him to be a part of that program,” Rivera’s grandfather said.

Jose Antonio Rivera said that back then, Alejandro Rivera was undergoing surgeries and couldn’t travel. With the COVID-19 pandemic outbreak and quarantines last year, the family’s plans to travel were even more limited.

He began to think of ways to help his grandson travel, because he knows that’s what the teen loves. However, that wasn’t always easy because of the seating, considering Alejandro Rivera uses a power wheelchair to navigate.

In one instance, Jose Antonio Rivera injured himself loading the boy into the car. A mobility chair came to mind, and presented it to the foundation back in February.

“We’re here today receiving this opportunity, this gift, this help from God, because God made this possible for us, as much as he’s made everything possible in Alejandro’s life,” Jose Antonio Rivera said.

When Alejandro Rivera was born, he was in the NICU for 30 days, he didn’t have pituitary glands and he was partially blind.

“He has many challenges in life,” Jose Antonio Rivera said. “We were told he wouldn’t live past six months and on Aug. 5 he’ll turn 16 years old thanks to God’s grace and glory, and he lives the most normal life for the conditions he has, that we can provide him.”

His grandfather said Rivera enjoys being around children and loves to hear them happy and playing.

“He hears them happy, he gets happy. We take him to special parks and he enjoys the swings and projects they have at those special parks. Right now, he’s fully healthy,” Jose Antonio Rivera said.

His grandfather called the wish being granted “God’s work.”

He encourages the Hispanic community to seek opportunities for their children, saying help will not find them. At Boshears, Jose Antonio Rivera said many of his grandson’s peers are Latino.

“Sometimes when we’re done with equipment, we pass it on to many families. I’m always talking to them, encouraging them, telling them to look for opportunities, there’s this available for this child, don’t be afraid to ask because if they just say no, just ask why, they’ll help you,” he said.

Representatives from the Make-A-Wish Foundation said the families they help are rarely Hispanic, but that the opportunity is available even to undocumented families, such as when a child has a life-ending or a life-altering diagnosis.

Tim Baker, general manager and operator at American Lift Aids, said Make-A-Wish was going to pay to grant the wish from them, but together with BraunAbility, they decided to cover the costs to make another child’s wish possible.

Baker said his family started the business 35 years ago and his parents run their store in Beaumont.

“I’ve been in the business a long time and I try to take care of our people and treat them like family because this is a service-based business. We’re selling a need, not a want. The wheelchair accessible vans, the driving modifications, just being around it from when I was a kid, there’s not really another industry that you can get that feeling from,” Baker said.

Sometimes when a person thinks they won’t be able to drive, Baker said that with their products, they’re able to provide mobility and independence they couldn’t have before.

“Make-A-Wish is such a good program and we wanted to be a part of it,” he said. Baker also said that in the future, the company would be willing to partner with foundations such as this one to help those who need it the most.