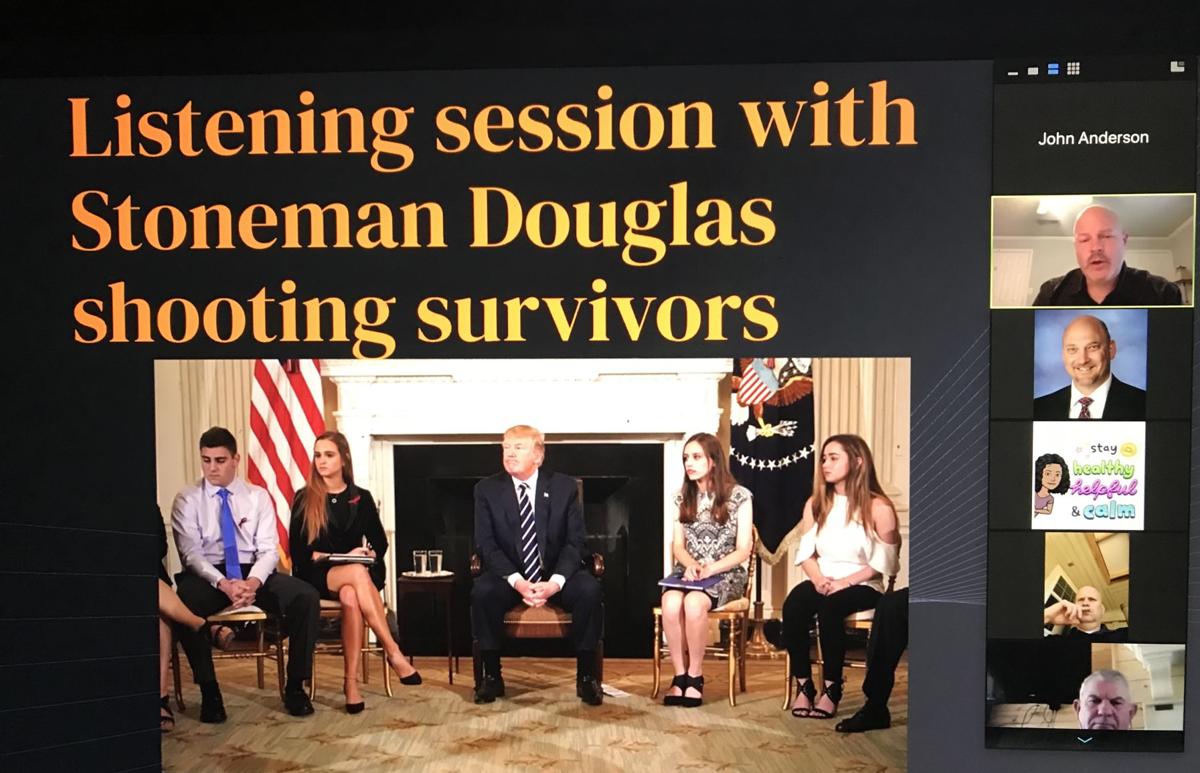 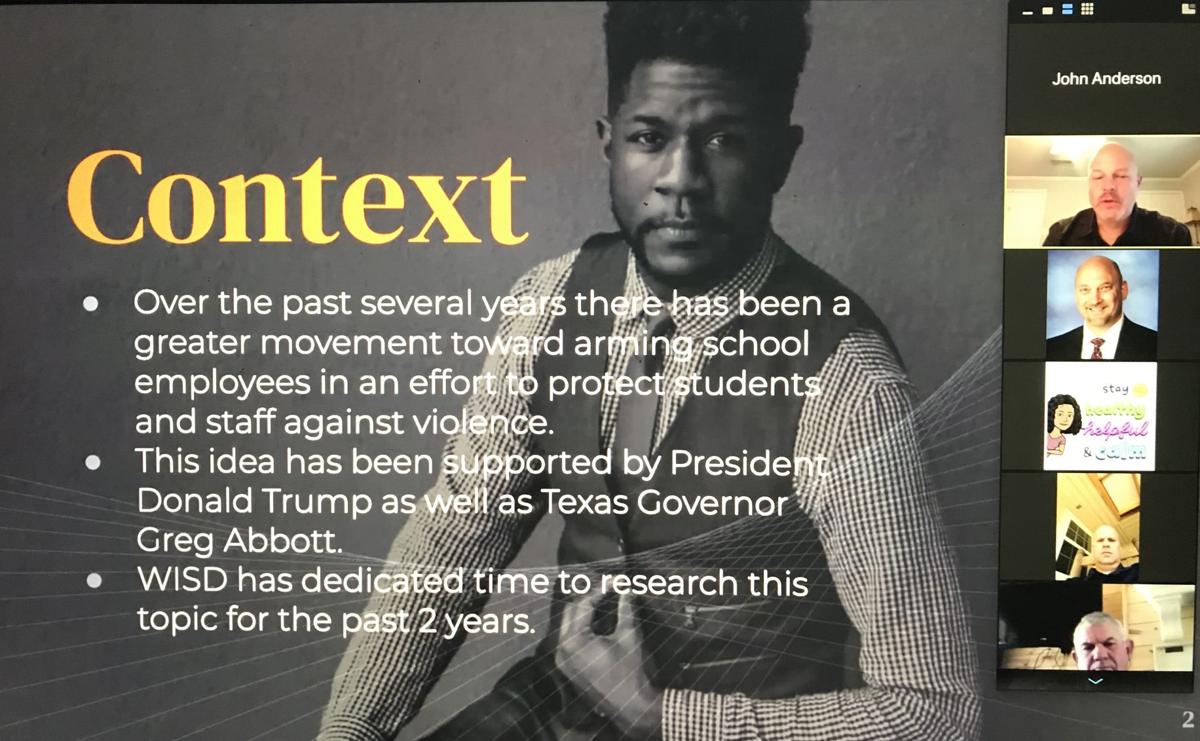 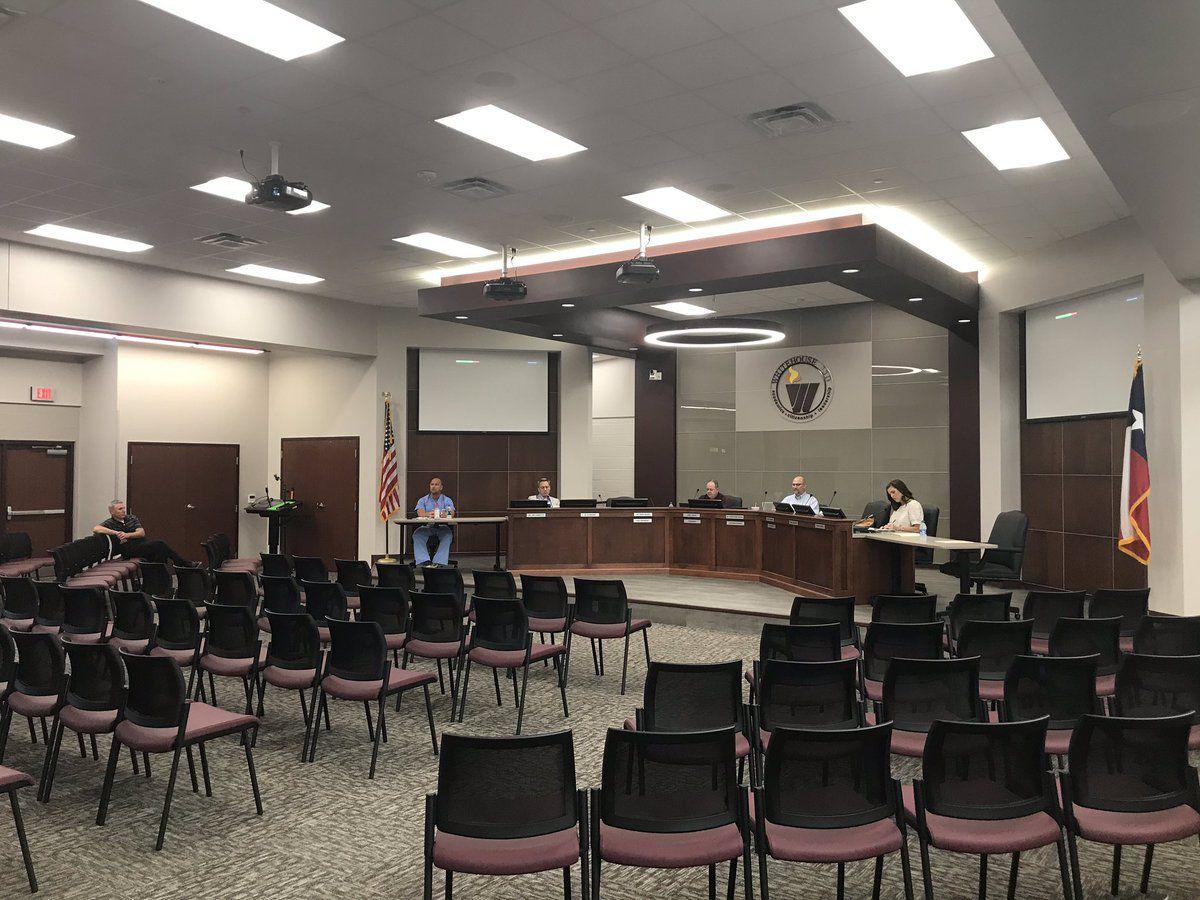 The Whitehouse ISD School Board meeting was held with some in attendance and others on a computer zoom program from home.

The Whitehouse ISD School Board meeting was held with some in attendance and others on a computer zoom program from home.

WHITEHOUSE — The public and students won’t know which teachers or staff members at Whitehouse ISD are carrying weapons, but protection of students against an armed intruder will ramp up as the district passed the Guardian Plan by a 4-0 vote Monday night.

Under the Guardian Plan, which is now in 304 districts in Texas, will allow any employee to carry, but outside of local authorities, the Whitehouse ISD board of education and the administration, but who carries will remain confidential.

There are 1,227 school districts in Texas, including charter schools. There are 12 districts who have passed the School Marshal Plan, which deputizes staff members and costs almost 15 times more per staff member to implement. Each teacher or staff member will have to have their personal gun approved and the cost is about $1,200 per employee for training and certification.

“The number of participants would not be shared with the public, the board has to approve the names of the participants enrolling in the program,” explained Whitehouse ISD Superintendent Dr. Christopher Moran. “If approved, they begin the hours of training. (Who has guns will) be a mystery to the public, That’s the power of this program. We don’t think we will ever use it, we are blessed to live in a safe community.”

Moran said when you hear about a school shooting, the first thing people say is it is a safe community and they would not expect it to happen. He does not anticipate violence at Whitehouse ISD, but wants to be prepared to stop it from happening, he said.

The Guardian Plan was first presented in September and then to a school staff meeting on Dec. 16, 2019, as well as seven other building staff meetings. It was discussed at board meetings in February and April. In December of 2019, the administration met with the education foundation and twice in separate meetings with the police departments in Whitehouse. They also met with the Pastors and Ministerial Alliance in December, PTO’s in September and October, the Education Support Center and with an advisory council.

Not only did the vote pass, the only member of the public to speak was in support of the vote.

“Thank you all for entertaining this. As a parent of a fifth grader and husband of a teacher, I am very happy to know their safety is being watched over by a program like this,” said community member Daniel Turner. “Thank you for looking at this.”

The vote was approved by Board President Greg Hood, and board members Dr. Joe Conflitti, Al Flanigan and Holly Conaway.

Dr. Kevin Whitman, the director of student auxiliary services gave a presentation on the plan.

“This is supported by our president, Donald Trump and our governor, Greg Abbott,” said Whitman, who showed slides of Trump meeting with survivors of the Stoneham Douglas school shooting in Parkland, Florida. Whitman quoted Trump saying if the gym teacher had a gun he could have killed the shooter.

They showed slides of Stoneman Douglas shooting survivors with Trump. Dr. Whitman quoted Trump saying if a gym teacher had a gun he would have killed a shooter (who killed 17 and injured 17 others).

Schools are required to have 16 hours of training for the volunteer program. Whitehouse ISD passed the resolution requiring 80 hours of training. Employees could start carrying concealed guns in August, Moran said. Also, there will be mental health testing on any employees who want to carry, which they must pass.

Moran went over the security measures that have been approved thanks to a bond over the past two years. He said the school has invested in social and emotional learning for students in the area of mental health.

We visited with school districts who have a program and we decided the Guardian Program was the best plan and we can adapt it for our students and our community and would be (a good fit) for those carrying a firearm on our campus,” said Whitman.

Moran closed the meeting by thanking the board for their work and said he was pleased they were transparent presenting the Guardian Plan to the public.

“The board has gone about this methodically and has been extremely concerned and wants the public to know what’s going on and there’s full transparency,” Moran said. “We had to make sure we did not rush through this and nothing during COVID-19 was slipped under the table. “