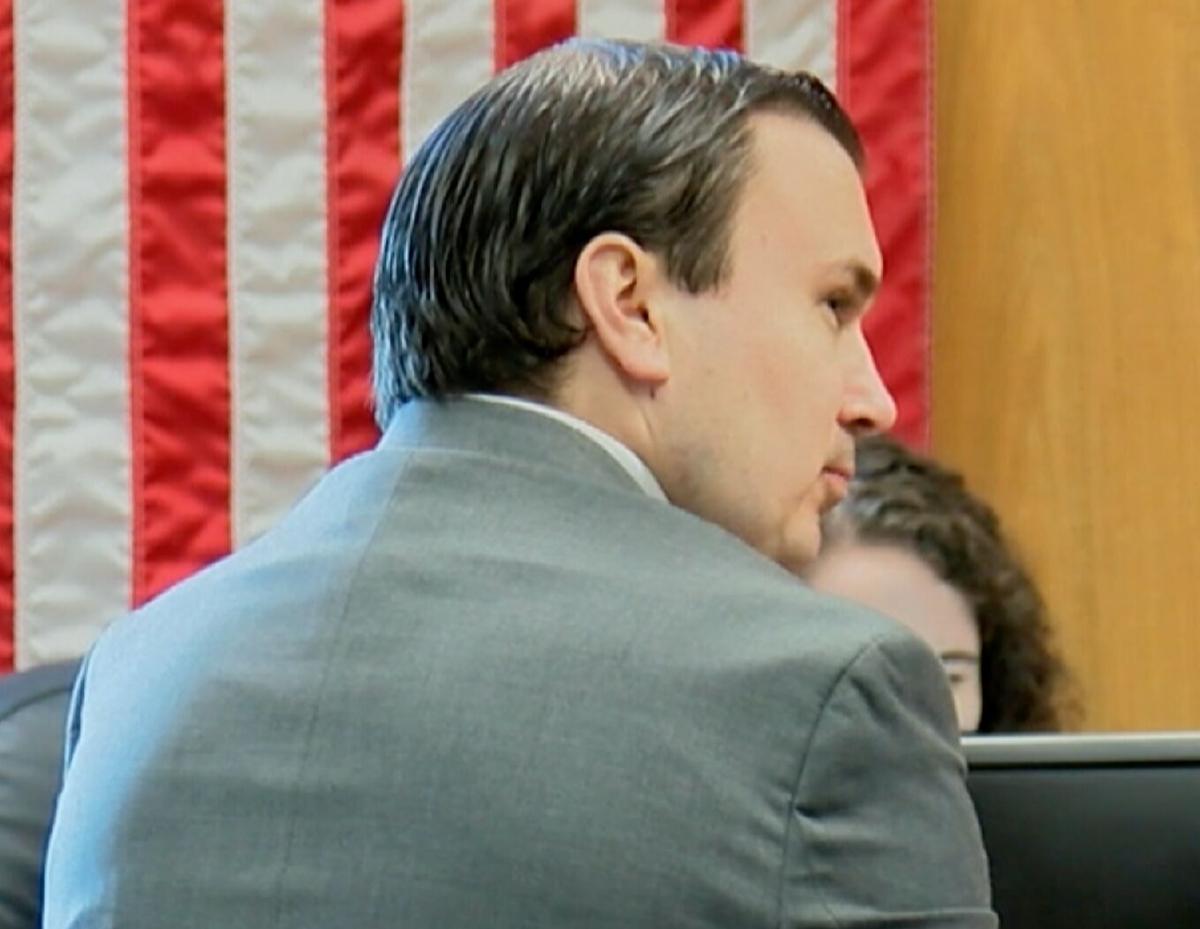 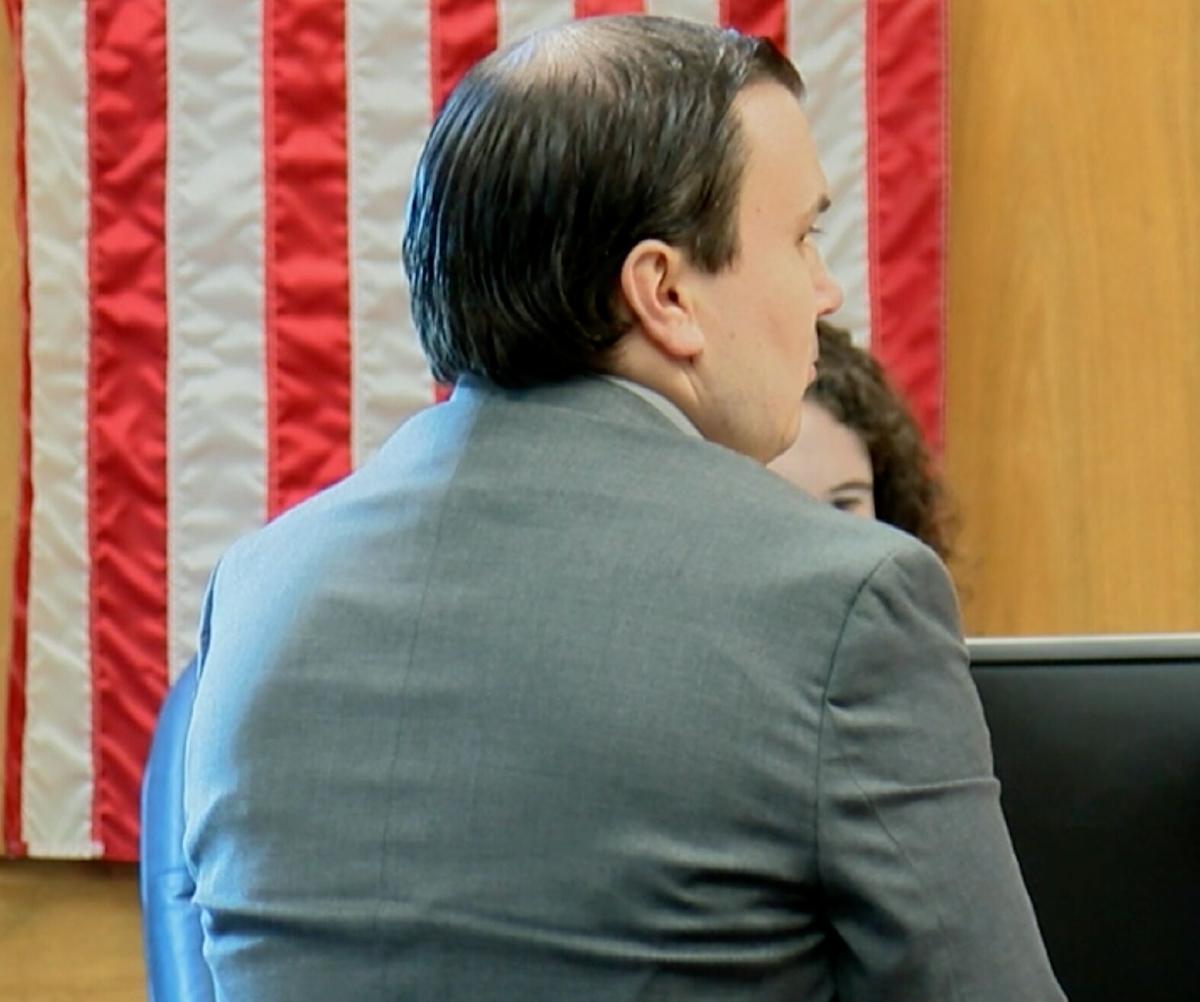 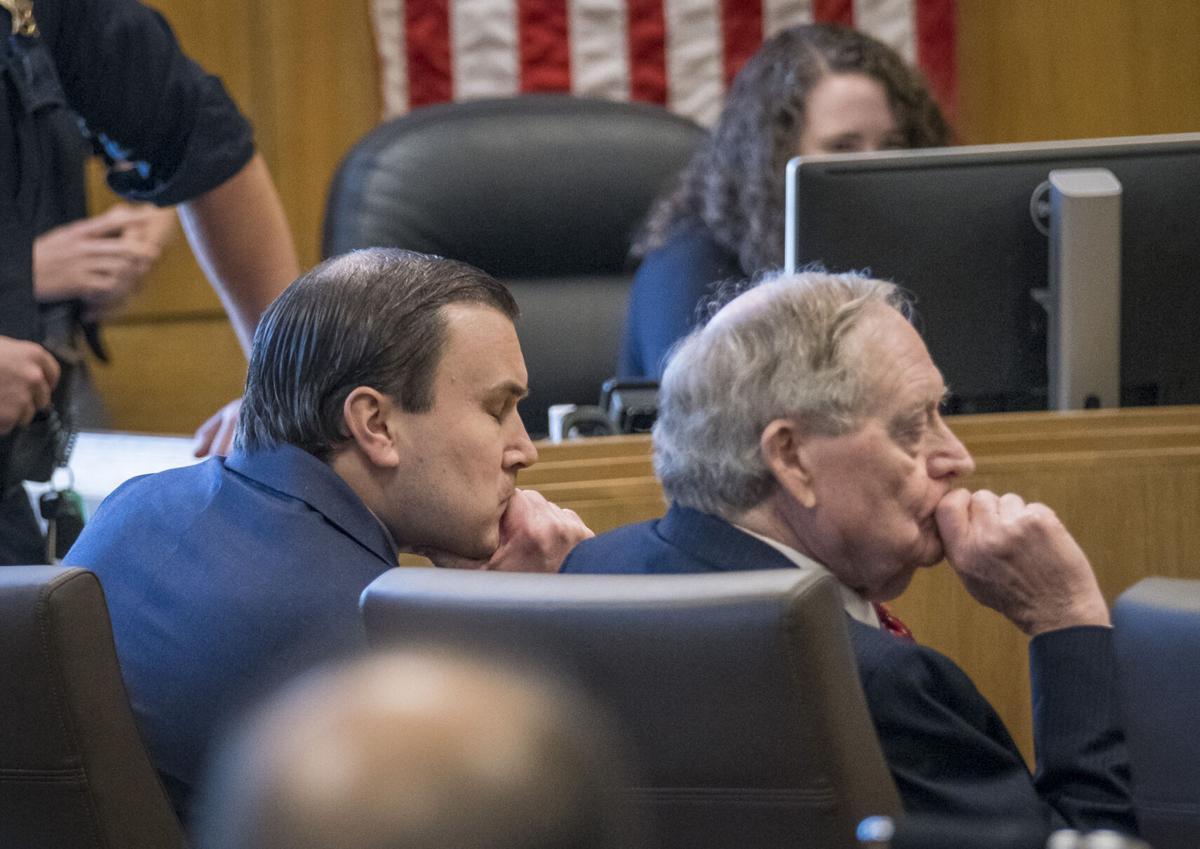 William George Davis, left, waits for the jury to return to the courtroom with their verdict during his trial for the death of four patients at Christus Trinity Mother Frances in Tyler, on Oct. 19, in the 114th District Court at the Smith County Courthouse. He was found guilty of capital murder Oct. 19 and sentenced to death this Wednesday.

William George Davis, left, waits for the jury to return to the courtroom with their verdict during his trial for the death of four patients at Christus Trinity Mother Frances in Tyler, on Oct. 19, in the 114th District Court at the Smith County Courthouse. He was found guilty of capital murder Oct. 19 and sentenced to death this Wednesday.

The jury found Davis has a probability of being a danger to society and found there are not sufficient mitigating factors that would hinder him from receiving the death penalty.

After hearing input from the jury, 114th District Court Judge Austin Reeve Jackson issued the official sentence. The jury deliberated for just under two hours after hearing the last bit of evidence from the defense and the closing arguments.

Davis remained stoic Wednesday as the sentence was pronounced, but he cried after a victim’s widow said she forgave him during the victim impact statements.

Davis, 37, of Hallsville, was found guilty Oct. 19 of injecting air into patients’ arterial systems while he was a nurse at Christus Trinity Mother Frances Louis and Peaches Owen Heart Hospital in Tyler, causing the deaths of patients John Lafferty, Ronald Clark, Christopher Greenaway and Joseph Kalina.

On Sept. 28, at the start of the trial, Davis entered a not guilty plea.

The jury’s guilty verdict came after the prosecution presented evidence for 11 days while the defense put on four witnesses across two days. The punishment phase began Oct. 20 with about four days of additional testimony.

Davis faced either life in prison without parole or the death penalty. In both phases of the trial, Davis elected to not take the witness stand.

As the defense’s final witness, psychologist Dr. Kristi Compton testified Wednesday as an expert for the defense that capital murder prisoners are no more likely to be violent in prison than other inmates.

She said the nature and method of the crime have no correlation with a person’s propensity toward violence.

Compton said people who commit drug offenses, are involved in gangs and people under age 30 are most likely to be associated with violence in prison.

In closing statements, Smith County District Attorney Jacob Putman told jurors the call Davis made from jail the same day he was convicted proves he is not upset about what he did.

During the sentencing phase of the trial, the prosecution played a recorded phone call from the Smith County Jail in which Davis told his ex-wife that he would find ways to prolong ICU patients’ stays at the Tyler hospital where he worked.

He said he did this to work more hours and get additional money to help with his family’s financial situation. Davis also told his ex-wife what happened to Kalina and the other patients were accidents.

Putman noted that Davis just stood by in 2017 and 2018 as people were trying to figure out what was happening to patients.

“He doesn’t need a reason to do it; he does it because he likes it,” Putman said, adding that the prosecution has proved without a doubt Davis is a danger.

He noted Davis’ second child was born in December 2017, which was just after Pamela Henderson was injured in November and before Kalina experienced brain damage in January.

Prosecutor Lance Long apologized to the jurors and said what they have gone through the past weeks is hard.

“Justice in this courthouse is not always easy,” he said.

Long told the jury Davis doesn’t have empathy and it’s almost like he got a charge out of hurting and killing patients.

“The reason we don’t hurt strangers or even people that are close to us is because we have empathy. What makes someone dangerous is when they don’t have empathy,” Long said. “Did he feel like God because he was the only one who knew what was going on in the hospital? All the while he sat back.”

Long replayed the recording of the jail phone call between Davis and his ex-wife alongside security footage of Davis the night of Kalina’s neurological event.

He also noted Davis’ inconsistent stories to police officers and hospital officials during the investigation.

“He did it on purpose, and he went and watched for Kalina to crash. The only reason we know about Joseph Kalina is because video cameras were installed,” Long said.

He added Davis “extinguished” the patients’ need to be in the hospital. He went over how each victim and their families were affected because of the deaths or injuries.

Davis’ ex-wife and their children are victims too, Long said, adding true remorse is not saying the deaths were accidents like Davis did.

“Deep down he is a serial monster, to use his own words,” he said. “He’s upset he got caught. Bottom line, it breaks the mold.”

During closing arguments, defense attorney Douglas Parks sought mercy for Davis from the jury and said life in prison would be better than death in spite of the crimes for which he was convicted.

“He’s not going to have access to health care to anyone else. (There’s) nothing to indicate he’s a danger to anyone else outside the cell,” Parks said.

He also said that if sentenced to life in prison, Davis’ punishment would include the waning numbers of letters sent to him and visitors coming to see him over the years. He added that Davis will miss many milestones in his children’s lives and that they will grow up without him.

Throughout the trial and during its sentencing phase, jurors heard different medical experts talk about what could have caused the patients recovering from heart surgery to have unexplained neurological events in 2017 and 2018.

Former Tyler Police Department Det. Jeff Roberts testified about a 2018 interview he had with Davis during which he said the former nurse was deflective and indirect when asked specific questions about the patients.

Proctor said he was aware of some unexpected patients’ outcomes at the heart hospital’s cardiovascular ICU in 2017 and 2018.

He recalled getting a phone call around 9 p.m. on Jan. 25, 2018, from Deb Chelette, vice president of operations and cardiac services for Christus Trinity Mother Frances Louis and Peaches Owen Heart Hospital, about complications Kalina endured.

Kalina was recovering from heart surgery when he had an unexplained neurological event causing brain damage. A scan showed he had air in the arterial system of his brain. He died two years later.

In a meeting with Chelette and Davis, Proctor testified Davis’ initial response to why he was in Kalina’s room was to silence an IV pump.

During a second meeting that followed Davis’ suspension, Proctor said Davis changed his recollection of events to say he did something with Kalina’s arterial line.

Medical personnel told the jury that just before each of the patients’ incidents they never expected complications to occur and medical records showed routine recoveries.

Family members and victims testified — often with strong emotion — about how the deaths or injuries changed their lives. People who knew Davis growing up, including a former high school student, his brother and football coach, testified about the person they knew.

Throughout the sentencing phase, the prosecution presented evidence to show that Davis killed three other patients and attempted to murder five more. Evidence showed the patients either died or were injured due to the injection of air into the arterial system or the venous system and an insulin injection into one’s body.

In addition to the four who died from air in the arterial system, Gary Parker, Pamela Henderson, Rickie Glenn, James Wages and Jesus Serrano were injured because of air in their arterial system, Dallas-area pulmonologist Dr. William Yarbrough said.

Those injected with air in their venous system include Perry Frank and James Blanks, who both died soon after the injection of air, Yarbrough testified. He also said recovering patient James Sanders had complications and died after an intentional insulin injection.

A U.S. Secret Service Agent, who analyzed a laptop with a username connected to Davis, testified the computer user viewed a Wikipedia article titled, “List of serial killers by number of victims,” in March 2018 just a month before his arrest.

Davis has been in the Smith County Jail since his April 2018 arrest on bonds totaling $8.75 million.

He was fired from Christus Mother Frances Hospital in Tyler on Feb. 15, 2018, for falsifying care events and unethical practice related to failure to disclose interventions provided that may have impacted the outcome of a patient.

His nursing license was suspended in March 2018 through a Texas Board of Nursing order.

As the jury is expected to begin sentencing deliberations today, jurors on Tuesday heard fro…

In a phone call to his ex-wife from the Smith County Jail, William George Davis, a former Ea…

Prosecution to rest in trial of former nurse accused of murder; defense to present evidence

After 11 days of testimony and presenting evidence, the prosecution will officially rest its…

Hospital president: Nurse accused of murder changed his stories when asked about patients

Heart surgeon: ‘Inconceivable’ air got in patients’ brains during surgery

Christus employee had concerns, noticed inconsistencies in meeting with nurse accused of murder

Testimony: Former East Texas nurse charged with murder was not assigned to patients who later died

From arrest to death sentence: Coverage of the Tyler hospital nurse murders