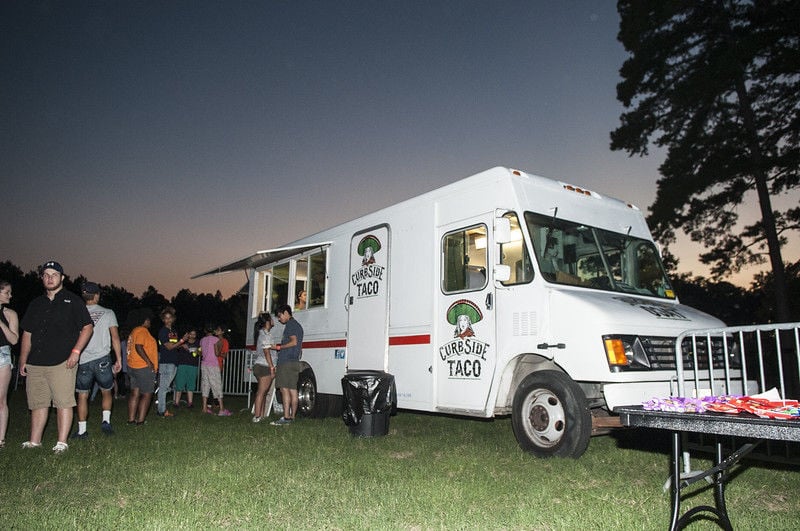 Curbside Taco serves students at UT Tyler, celebrating its victory in the long fight toward reshaping how food vendors are permitted in the city on Friday, Sept. 2, 2016. (Jane Koura/Staff) 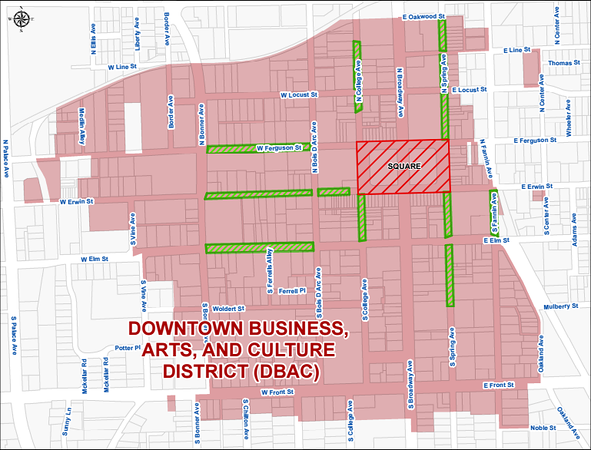 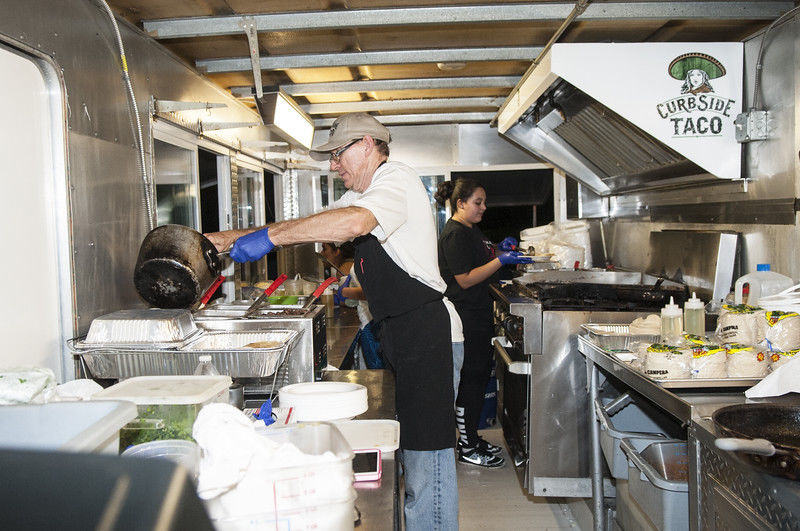 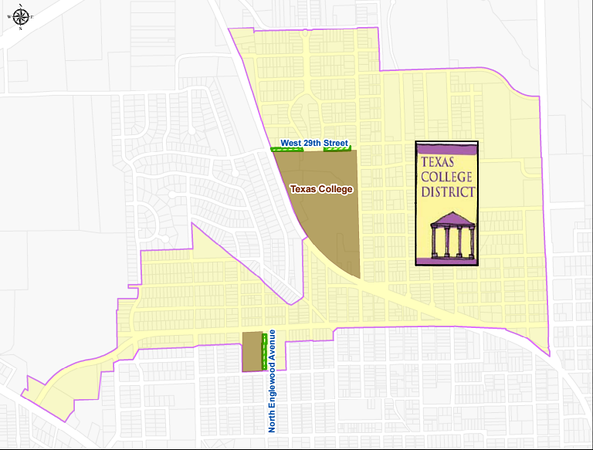 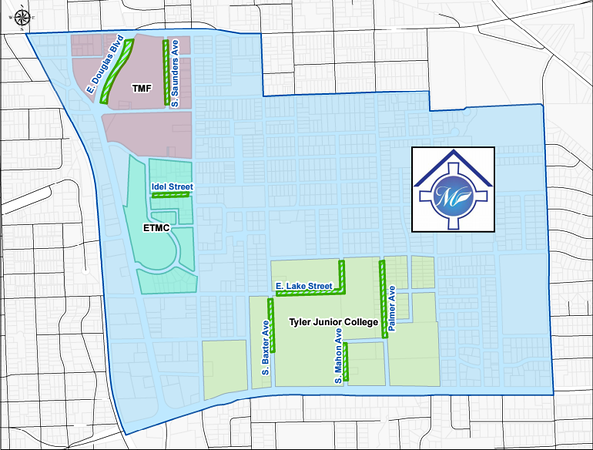 Curbside Taco is the first fully permitted food truck in the city of Tyler. With the health permit, its owner Chester Kruse can sell his creations in the highlighted area of downtown Tyler. Courtesy graphic. 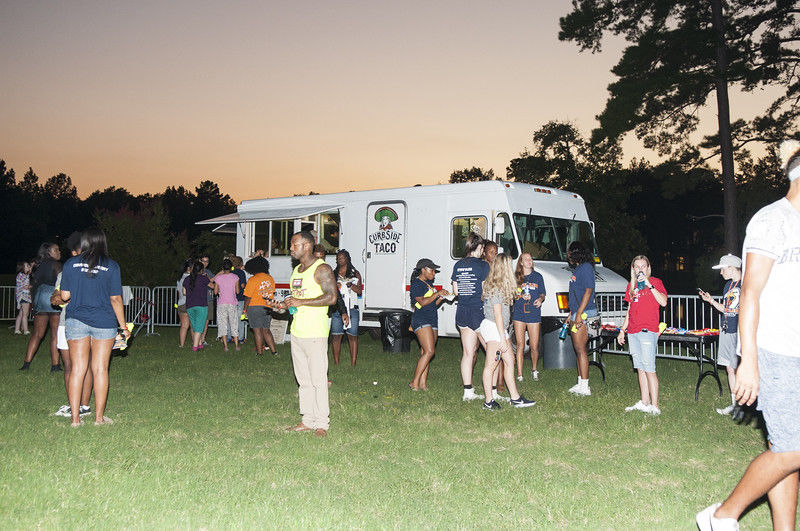 Students at UT Tyler enjoy Curbside Taco during a concert celebrating the beginning of a new semester on Friday, Sept. 2, 2016. (Jane Koura/Staff) 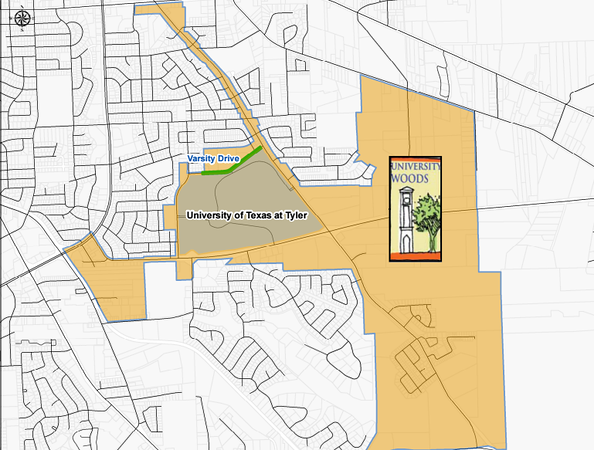 Curbside Taco serves students at UT Tyler, celebrating its victory in the long fight toward reshaping how food vendors are permitted in the city on Friday, Sept. 2, 2016. (Jane Koura/Staff)

Curbside Taco is the first fully permitted food truck in the city of Tyler. With the health permit, its owner Chester Kruse can sell his creations in the highlighted area of downtown Tyler. Courtesy graphic.

Students at UT Tyler enjoy Curbside Taco during a concert celebrating the beginning of a new semester on Friday, Sept. 2, 2016. (Jane Koura/Staff)

Chester Kruse quit his day job on a leap of faith to chase a dream of owning a food truck.

With the OK to sell his tacos throughout the city, Kruse said his biggest challenge ahead is hiring part-time employees to help staff the truck for more hours and picking what locations will keep his crew the busiest. Under a pilot city program, Kruse can sell tacos in four areas in town, plus on private property with permission from the owner. Those areas include the downtown business district, midtown district, including areas around Tyler Junior College and the hospitals, as well as near The University of Texas at Tyler and Texas College. He also can be adjacent to city parks and in active construction zones to feed hungry workers.

It's been a long process, Kruse said. After two years, his truck still did not pass the Northeast Texas Public Health standards. However, the department, with the help of the city of Tyler, is actively working to relax those rules. City officials have publicly said they believe the health department's rules were so stringent they were unachievable for entrepreneurs.

"I think we are making good progress," NET Health CEO George Roberts said. "We are in public health. My ultimate goal is to prevent illness, promote health and protect our community. We also want to make sure we are being responsive to our city, county and residents. This is part of making sure we are listening to our customers and adapting to meet the needs."

A proposed set of softened regulations are in the works to ease the construction standards for trucks. Those changes to the district food order, the rulebook for restaurants and food vendors, are under review by the city and NET Health Department's lawyers and are anticipated to go before the health department's board of directors in late September for approval. Roberts did not comment on what the proposed changes include.

The city of Tyler contracts NET Health to do its food establishment inspections.

Roberts said Kruse passed because he made significant progress in meeting the health department's rules and only lacked minor changes to be fully in compliance.

Kruse estimates he spent more than $10,000 on modifications to the taco truck, which he leases. Even then, it wouldn't have passed under the former regulations.

It's not cheap or easy to be a trailblazer.

Kruse's counter tops were replaced with a surface that extended up the wall slightly, creating a curve and eliminating a joint where the wall and table met. The health department said that crack was at risk for trapping bacteria.

He installed a fire suppression system, which was required by the city of Tyler.

A year ago, Kruse thought the last big-ticket item for compliance was his flooring. The truck's diamond-cut steel floor was textured and riveted in sections, creating the possibility that dirt and food debris could collect where the sections meet. Because the floor was not one continuous piece, it did does not meet the health department's requirement of flooring that is smooth, washable, durable and easy to clean.

Then, he was told his fiberglass roof would not meet standards. It needed to be made of smooth metal to make it easier to clean. Roberts said that requirement was not on his list of required changes.

Kruse said the health department worked with him in other areas. About eight months ago, the department gave his truck a temporary status as a mobile food vendor, allowing him to more-freely sell his products around town. It allowed him time to make money to pay for some of the repairs, but after six months, he still could not afford certain repairs, and his provisional permit was revoked.

"In some ways NET Health has helped me," Kruse said. "I think it was mainly the way my truck (is configured). Their standards were (modeled more for a) restaurant than food tucks."

For two years, Kruse operated using special use permits, in lieu of a mobile food vendor permit. Those are temporary in nature and designed for events, such as selling hamburgers at a fundraiser or the East Texas State Fair.

The longest Kruse could be permitted was two weeks, with a cost of $215 for the permit.

He said he also was not permitted to cook raw chicken on the truck, because it is a high-risk item. So, he purchased pre-cooked chicken, with an estimated price tag of $200 a week.

The health department said Kruse could have applied for a permit that would have allowed him to cook raw chicken, but opted not to.

NET Health also loosened a temporary use permit requirement that groceries be purchased daily, allowing Kruse to store groceries at his commissary at Villa Montez.

Kruse commended the owners of Villa Montez for their willingness to comply with health department standards for commissaries, which are required by state law as a home base for cleaning and food prep.

"They have put a lot of money in this restaurant making the health department happy," he said. "They built a concrete slab with a drain, an overhead and a door to the restaurant. There's no way I could have started this business without their help."

Kruse also thanked the Tyler community at large for embracing the concept and buying his tacos.

The department's commissary requirements also are under review.

Kruse said the biggest suggestion he has for up-and-coming food truck operators is to communicate with the city and health department before purchasing a truck.

Kruse is the first, but certainly not the only person interested in taking culinary creations to Tyler.

Kruse said he is working on expanding his menu to stay competitive in an expanding market.

A CITY OF POSSIBILITIES

Now that Curbside Taco is fully permitted, it can enter into the city's mobile food unit pilot program, which would allow food trucks to be in the right of way on very specific streets during set times.

The mobile food unit street vending pilot program allows trucks to be in the right of way of active construction zones and along specified streets in the hospital district and near Tyler Junior College, near The University of Texas at Tyler, Texas College, city parks and downtown Tyler.

The trucks are allowed to park in already established parking spaces along thoroughfares, but not in grass.

Food trucks will not be allowed to be open from 10 p.m. to 7 a.m., with the exception of Tyler's downtown area, the ordinance reads.

Downtown, food trucks will be banned from operating on the downtown square, but will be allowed on various side streets. They also have different allowable operation times, and will serve the late-night crowd from 10 p.m. to 2 a.m.

The pilot program is a living document and subject to re-evaluation and change if problems arise.